Disclaimer: While our reviews are as always the completely correct opinion on the new cards and should be taken as absolute fact, we are not responsible for any decisions you may make based on our reviews. If you aren't skilled enough to correctly use the cards we accurately ascertain are good, then that seems like a personal problem and none of our business, actually. 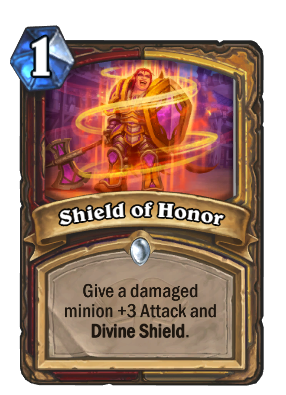 Live with honor, die with glory!

This is actually a pretty interesting card particularly for Warrior. There's solid tools for an enrage-style Warrior deck in Standard right now that's just missing a little bit of aggressive juice, and this card can lead to some very scary snowballed boards with the right draw. Divine Shield is really powerful buffing something like an Amani Berserker or Bonechewer Brawler because that means they're resistant to removal or can force trades twice before going down. As for Paladin decks, I could also see this being included in a more aggressive Pure Paladin deck or even Murloc Paladin, given that those decks have other buffs that make it easier to have a damaged minion handy. Assuming you can reliably have a damaged minion, this is Blessing of Might and Hand of Protection rolled into one and discounted by a mana, which is quite an efficient deal that many aggro decks would be interested in. 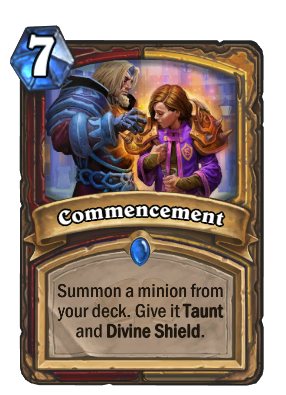 If there's an archetype that I thought would be supported in this set from the initial trailer, it was Big Warrior. Even if it's just one card, it's nice that the archetype at least got something. A something that might see play too. In a vacuum, this card can be thought of as a Gather Your Party that pays 1 extra mana to give the minion you summon Taunt and Divine Shield. On face value, Taunt and Divine Shield is definitely worth 1 mana, although it coming out one turn later on curve is also pretty significant. It is also a high cost spell for Ceremonial Maul if you choose to play that, which is a plus as Warrior has always been lacking in large spells to use with Maul.

I'm fairly doubtful that either Big Warrior or Big Paladin will see play despite the fact that this is good support for it. It's always available when it becomes good though. 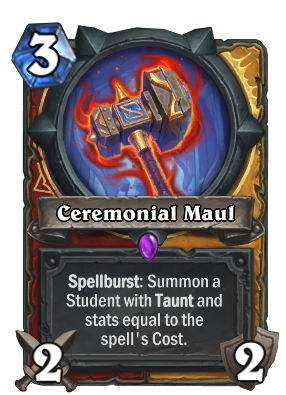 Don't worry if it splits in half, that's a lot easier to fix than you might think.

Ceremonial Maul is one of those cards that pay off the longer you hold on to it. It's alright, early on, but the minion summoned through it would have its stats on curve, which is still a decent effect, however this weapon can truly shine when played with a big, big spell.

Paladins, on the other hand, can get way more out of this effect. Since Spellburst can also be triggered on another turn - as long you still have the weapon equipped - Paladins have access to even stronger students, with the help of Libram of Hope, Lay on Hands, and Tip the Scales (be careful with that last one, there might not be enough space left to summon the Student).

All in all, this card can be way more useful for Paladins than Warriors. That's not to say it's bad for Warriors - it simply means its potential is capped at a lower tier than for Paladins. A combo of Student + Commencement will still be quite hard to go up against, no doubt; and in Wild, this weapon coupled with Dimensional Ripper can quickly turn the game around if the opponent has no nuclear AOE in their hand to counter it in time. 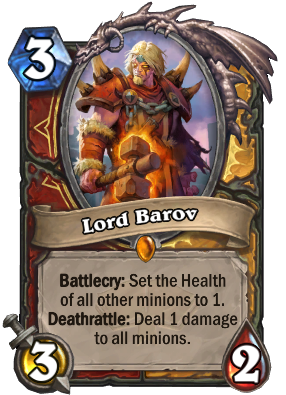 Lord Barov isn't overly unique for the Paladin - it's just Equality on a cheaper, one-off body - but such an effect is brand-new for the Warrior, and brings all sorts of implications. The most pertinent one is probably the juicy combination of Barov and Risky Skipper, which results in an instant board clear for just 4-mana total. You can also use cards like Rocket Augmerchant or Sword and Board to kill off Lord Barov and trigger the clearing Deathrattle, if you lack the Skipper. All-in-all this is a solid dual-class Legendary minion, meshing the two classes together in a way that brings something new to the table (for the Warrior, anyway). 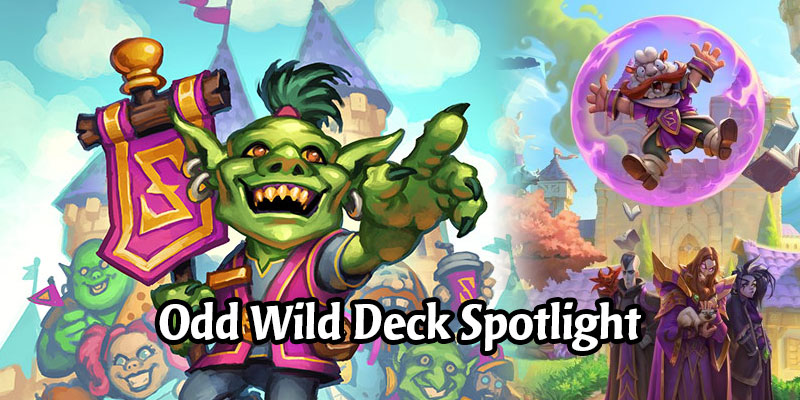