We've got more Darkmoon Faire Mini Set card reveals to share and oh boy do we have a large batch of them!

A very interesting build-around card, but one that might be a bit tricky to make work. Playing this on curve after all of 1,2, and 3 cost minions have died is an exceptionally powerful tempo swing considering your opponent has spent the resources to kill the original three minions. Such a swing might be a bit tricky to pull off in practice though, so let's consider some other potential uses.

Priest has access to Fairground Fool, which makes a very strong resurrection target, though decks that run Fool might be a bit light on 1 and 2 drops. It's worth noting that Rally can also target resurrect Sethekk Veilweaver and Nazmani Bloodweaver for Miracle decks. Since Rally is also a spell, Palm Reading can make it cheaper to make value turns easier. There might be space for some Tempo Priest shenanigans, but it seems bleak considering other classes just do it so much better.

On Paladin's end, the resurrect pool is a bit less spicy. [Hearthstone Card (Murgur Murgurgurgle) Not Found], Shotbot, and Goody Two-Shields are some notable resurrect hits that can be very annoying for the opponent to deal with. There might be some janky Dragon combos withRedscale Dragontamer and Dragonrider Talritha or some spammy Secret deck with Commander Rhyssa that could try to use this, but Paladin already has many strong cards to contend with. More likely to be used in Tempo or Midrange scenarios than Priest, but still a bit tricky to use. 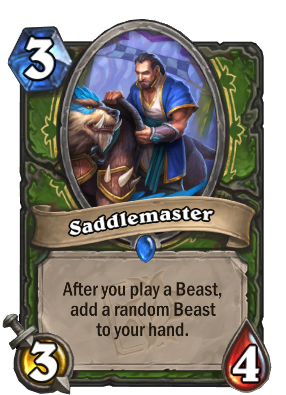 Stampede on a stick. Saddlemaster passes the vanilla test, and that's about it. The good news is that he can supply value whenever you play a Beast. The bad news is that the pool of Beasts that he can pull from is so wide that there's no way to reliably predict what you get and many of the Beasts he could give you are bad. It might be fun for memes, but is unlikely to ever be powerful enough to see play in a serious deck. 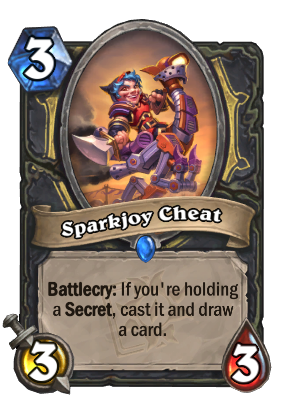 Remember my winning card from the season 2 Christmas comp called Gift Wrapper? Here it is now! Only it looks a little bit different. Incidentally, they both happen to be 3 mana 3/3s that put a Secret into the battlefield for Rogues. I happily take prophet status for the second time.

But this card seems to be pretty good because it gives you a lot. Getting a "free" Secret and a cantrip is quite good on top of being a 3/3 for a 3. If you consider the cost of 2 mana for Rogue Secrets, it's basically a 1 mana 3/3 that draws a card, which is obviously quite broken. This isn't quite like that though, it's a bit weaker than just a plain 1 mana 3/3 that draws a card, but it's still very strong. Probably an auto-include in Secret Rogue.

One weird thing about the card is that it anti-synergizes with Shadowjeweler Hanar because playing a Secret from Sparkjoy Cheat won't trigger Hanar and won't give you a Secret to Discover. 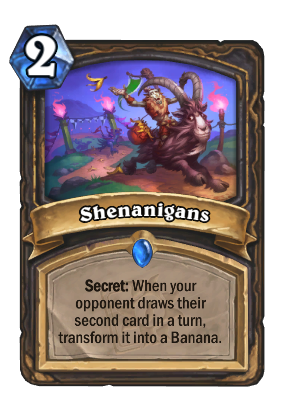 If there ever was a competition for the most tricky Secret in terms of spelling, we've got a worthy frontrunner. A Bananas for you and a Bananas for me! Or okay, just for your opponent. So they can have fun with their precious card turning into something else.

Aside from the memes or being your prime chance to get back at those evil Tickatus Warlocks should you win the draw lottery, it fits the theme of Rogue Secrets being somewhat quirky. There is potential for evil disruption and causing many frustrations, in the eternal spirit of Hearthstone; and it's not going to be that simple to play around while checking for all possible conditions. But you still have to give up a card just to randomly nullify one on the opposing side, and they might not end up drawing more than one in a turn for quite a while.

So while it probably won't see much serious play in main Secret Rogue builds, Shadowjeweler Hanar is a thing. Just as any spell generations. If you are facing a Combo or a Control deck with a win condition consisting of several cards (hey, C'Thun, the Shattered), you just might get lucky. Bananas! 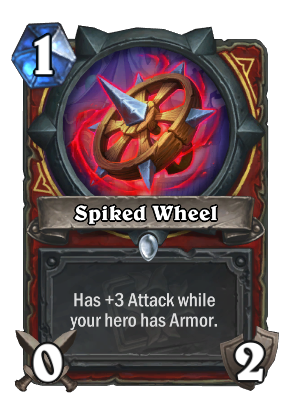 This is a very strong little card. 3 Attack is no joke, and the fact that it's tied to something you can access at any time via your Hero Power is nothing to sniff at.

My immediate point of comparison was Bladed Gauntlet. I think this is a far better card, costing less and being easier to turn on, as well as being able to go face if you need to. The only advantage to Bladed Gauntlet is serving as pseudo removal in more long game decks that generate a ton of Armor, but that's a specific and niche use that Warrior simply has better cards to cover, like Coerce or Shield Slam.

To see the real power of Spiked Wheel, think back to cards that have a similar Attack boosting mechanic. Spirit Claws is a very powerful example with a similarly simple activation condition - while random from their Hero Power, Spell Damage was easy to come by for a Shaman and Armor is no different for a Warrior. Having less durability and no inherent Attack by itself isn't great, but Warrior does have good Weapon synergies and Pirate support which this card will love.