A new Hearthstone year will soon be upon us, and with a new year comes the anticipated three sets, all of them filled with legendary cards showcasing original characters and significant characters from the lore of World of Warcraft. In the spirit of fun speculation, here are the warrior characters from WoW Lore we’d love to see in the next Hearthstone year.

There’s going to be a lot of orcs in this list, so let’s start out by covering some Alliance heroes first. Anduin Lothar is, in fact, the man that Prince Anduin Wrynn is named after. Known as the Lion of Stormwind, he was the last descendant of the Arathi bloodline, great kings and warriors who had once united all of humankind under a single empire in the Eastern Kingdoms. He grew up as childhood friends with the prince, Llane Wrynn, and Medivh. He served as a powerful military leader in the First and Second wars against the Orcish Horde, and the Knight-Regent of Stormwind after Llane was killed by Garona with Kingsbane. Serving as the guardian of the Llane’s young son, Varian Wrynn, he played a vital role in the formation of the first Alliance to retake Stormwind from the Horde. He was killed at the end of the second war by Orgrim Doomhammer, but his heroism inspired his friends, Khadgar and Turalyon to defeat the Horde in the end. 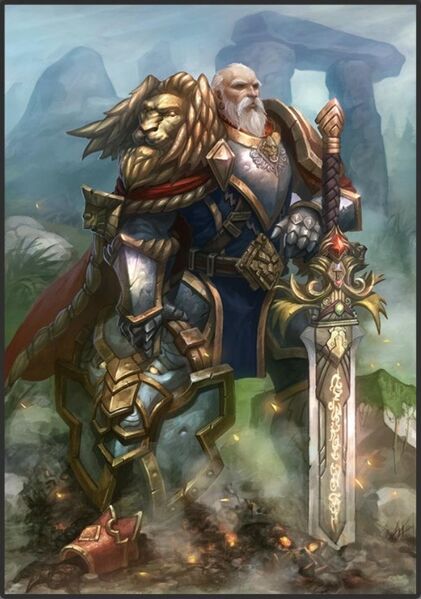 Brother to Magni Bronzebeard and Brann Bronzebeard, Muradin was a tough fighter for the Alliance and combat trainer to a young Prince Arthas Menethil. He also worked as a member of the Explorers' League alongside his brother Brann. On one trip for the league, he traveled to Northrend perusing rumors of a runeblade known as Frostmourne. Running into the now-grown Arthas, he agreed to help the prince find the sword in hopes that it could kill the dreadlord Mal'Ganis. When Arthas claimed the blade, however, a jagged shard from the ice it had been incased in impaled Muradin, causing Arthas to believe him dead and abandoning him.

In truth, Muradin had only been severely wounded and knocked unconscious, causing him to lose his memory. He was found and nursed back to health by a group of dwarves called the Frostborn who lived in the Storm Peaks of Northrend. These dwarves took him in and, as he couldn’t remember his real name, named him after a champion from the past: Yorg Stormheart. Eventually he was made their kind. Later on, he and his people were found by the Alliance during their campaign against The Lich King. With a recovered memory, he made his clan allies of the Alliance and reunited with his family.

Returning to the dwarven city of Ironforge during the Cataclysm, Muradin became the representative of the Bronzebeard dwarves in the newly-formed Council of Three Hammers, which ruled all of dwarfkind. 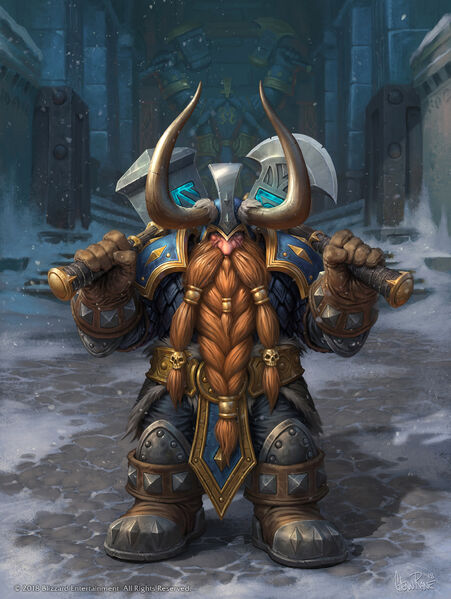 Ok, now it’s time for a lot of orcs. First we have two brothers who could be argued to be the epitome of warrior strength and courage. Broxigar was a veteran of the First, Second, and Third Wars and honored by the Horde for his heroics, although he suffered from survivor's guilt after being the only one of his comrades to make it through a battle. None of this is why he is such a renowned warrior, though. No, that’s because he became a time-traveler and stabbed the lord of the Burning Legion himself, Sargeras.

One day, Broxigar was told of a strange anomaly in the Stonetalon by a shaman and went to investigate, but it was unlike anything he’d seen before. It was the Bronze dragon aspect, Nozdormu, trapped in a time vortex, trying to hold it together as the past was deviating from its proper course and threatening all of reality. Broxigar, along with Rhonin and the red dragon Korialstrasz, were sucked back in time to the War of the Ancients, 10,000 years in the past. There, he met the younger past versions of Tyrande Whisperwind, Malfurion Stormrage, and Illidan Stormrage, teaming up with them to drive back the demon invasion and ensure that events played out as they were supposed to. Malfurion even made him a powerful weapon called the Axe of Cenarius, which Broxigar used with great effect, slaughtering thousands of demons with it. In order to buy his companions more time to win the war, Broxigar sacrificed himself by leaping through a portal to the demon world of Argus. There, he caused such chaos and killed so many demons that Sargeras himself came to kill the troublemaking orc. With his great strength, courage, and magic weapon, Broxigar did the unthinkable and attacked Sargeras directly, managing to inflict a small wound which could be used to momentarily distract the demon lord. He was no match for Sargeras’ full might, though, and died in a blaze of glory, having accomplished more heroism in his great sacrifice than most orcs could ever dream of. 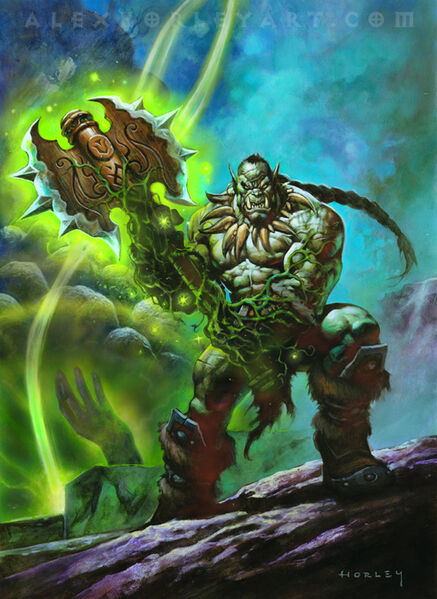 Broxigar’s younger brother, Varok Saurfang, may not have had exploits as flashy as his brother, but he was a strong warrior and a loyal veteran of the Horde who had been there since its founding. He was renowned for his strength and honor, although he had a brutal past from the foundation of the Horde where he had joined Grommash Hellscream and the other orcs in an assault on the peaceful draenei of Shattrath City and slaughtered men, women, and children. These actions eventually filled him with deep regret. He was so respected by both the Alliance and Horde that they chose him to lead a joint-faction assault on C'Thun’s prison of Ahn'Qiraj when the old god began to stir and his armies threatened Azeroth. Saurfang later recovered his long-lost son, Dranosh, in Outland, only to lose him in Icecrown when the Lich King turned him into a death knight. Again, Saurfang’s reputation was honored by the Alliance as they peacefully allowed him to retrieve his son’s body after he was defeated. 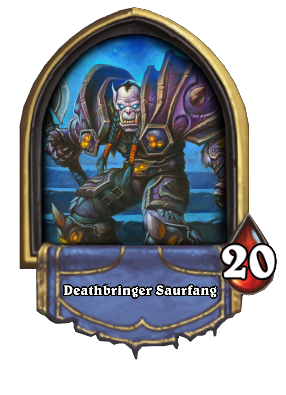 Deathbringer Saurfang, Varok's son raised and forced into the Lich King's services as a death knight.

Saurfang repeatedly stood up against tyranny in the Horde when warchiefs like Garrosh Hellscream and Sylvanas Windrunner led the Horde down dark roads. He died fighting a one-on-one duel against Sylvanas in order to trick her into exposing her true distain for the Horde and losing the loyalty of many of her followers. Enraged, she killed him with blast of dark death magic before abandoning the Horde to peruse her own agenda in the realms of death. Through his heroic actions that day, Saurfang prevented many deaths and was honored by Horde and Alliance alike. 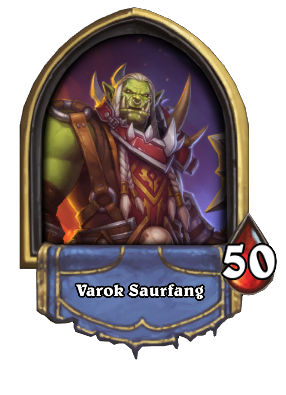 Varok Saurfang as a fight in the Book of Heroes solo adventures.

A far less honorable orc, Blackhand was basically every negative orc stereotype all rolled into one. A brutal warrior and skilled weaponsmith, he was the first warchief of the orcish horde, but in reality was nothing more than a puppet leader for Gul'dan and his demon masters to use as a figurehead to ear the orc’s allegiance. On Gul’dan’s orders, he forged Kingsbane out of a strange ore that was filled with the raw hatred of a demon. He served a major role in corrupting the orcs into warlocks and fel-infused warriors to become tools of the Burning Legion. After the Dark Portal was constructed, he led the Horde in the First War to conquer Azeroth. He was brutal in his tactics and even murdered his own daughter when she disobeyed him. At the end of the First War, Gul’dan fell into a coma, leaving Blackhand venerable without the protection of his puppet master. His skull was crushed by his second in command, Orgrim Doomhammer, in a mak’gora duel for leadership after Doomhammer uncovered the truth about Blackhand’s loyalties. 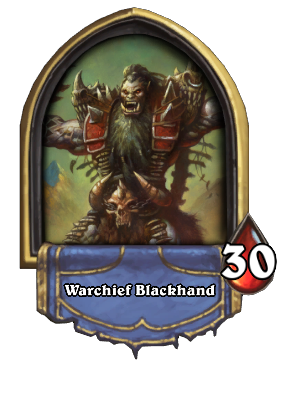 Blackhand as depicted in the Book of Heroes solo adventures.

Out last orc on this list, Nazgrim was one of the Horde’s greatest generals. You might know him as a death knight card from Uther of the Ebon Blade, but before he was raised as one of the Four Horsemen, he had a decorated military carrier, rising from sergeant to general within a few short years thanks to his service during the fight against the Lich King and the Cataclysm. When the lost continent of Pandaria was discovered, he was tasked by Warchief Garrosh with leading a strike force to prepare the newly-discovered land for conquest. Nazgrim held a strong sense of loyalty to the Horde and warchief, and felt honor and duty-bound to serve as his warchief commanded, no matter what it was. Many others in the Horde didn’t feel the same way, however, and a rebellion arose led by Vol'jin and Thrall to overthrow Garrosh’s corruption and tyranny. The rebels teamed up with the Alliance to lay siege to the Horde capital of Orgrimmar, and Nazgrim held the line against them, dying to fulfill his oath of loyalty.

Later on, he was raised as Deathlord Nazgrim by the Knights of the Ebon Blade to use his strength against the Burning Legion’s invasion of Azeroth. 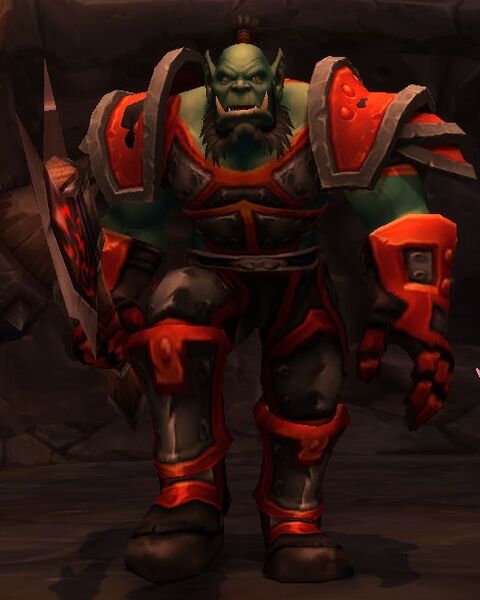 Ravencrest was a night elf who lived during the War of the Ancients 10,000 years ago. A masterful general and the master of his castle, Black Rook Hold, he led the night elf resistance against the invading demons and Queen Azshara’s power-hungry highborn cast of elves who had summoned them. He was a patron and mentor to Illidan Stormrage and promoted him to be the master of the Moon Guard forces, although he later questioned the wisdom of his choice, since Illidan was reckless and sacrificed many of his own soldiers for the sake of victory. He was killed by Captain Varo'then, one of Azshara’s personal assassins in an attempt to crush the rebellion by depriving them of their populist leader. Thousands of years later, during the Burning Legion’s third invasion of Azeroth, Ravencrest and the rest of his army were raised as tormented ghosts by Gul’dan, haunting Black Rook Hold. Unable to see the reality of their situation, they believed themselves to be still fighting in the War of the Ancients until the spell over them was broken by heroic adventurers. 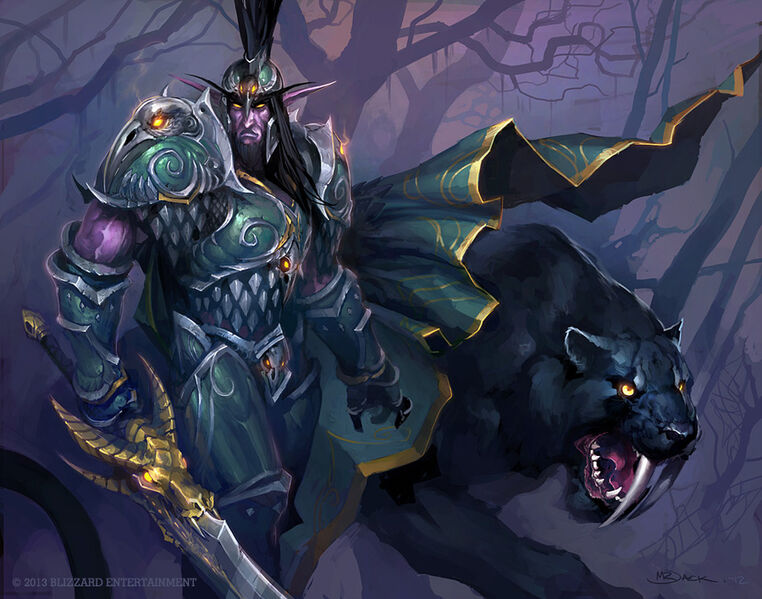 Those are seven of our top Warcraft warriors who deserve their own Hearthstone cards. What do you think of our picks? Does any particular character’s story stand out to you above the rest? What are your suggestions for other entries on this list? Let us know down in the comments.