Hearthstone at its core is a game that people should have fun with, but that can get bogged down in the pursuit of competitive meta strategies. Thus, I humbly present Memes and Dreams, a series on Out of Cards looking to bring some good ol' memey fun into people's Hearthstone experiences. Each week we will do a deep dive on a different 'for fun' deck, discussing the basic ideas of the deck, what makes it tick, and roughly how to pilot it. This week we're taking a look at another high-roll aggressive Shaman!

Now that the dust has settled after the Barrens release, it is safe to say that Murloc Shaman isn't meta and can therefore be a meme! Now, that isn't to say that the archetype itself is entirely a meme. There are certainly ways to construct it that make it a mediocre Aggro deck, but we're looking for something dumber. Thankfully, Magicfin is around to really amp up the general stupidity of the deck.

While there is a generic Murloc Aggro gameplan, Magicfin can help the deck scale a bit into the late-game by providing some very much-needed value generation. The deck's card draw is mediocre, the aggression isn't much compared to other lists, and the archetype itself is hurting, but damn when things come together, it can feel really stupid (in the best ways).

The Meme - Do your damndest to keep the board early and set up all your Murlocs. This might mean the opponent dies in your early-game blitz and you don't get value later, but such is the price of success.

The Dream - Set yourself up for crazy value highrolls from Magicfin and Vivid Spores, making it so that whatever your opponent does to keep control or clear the board, you'll have some backup value. 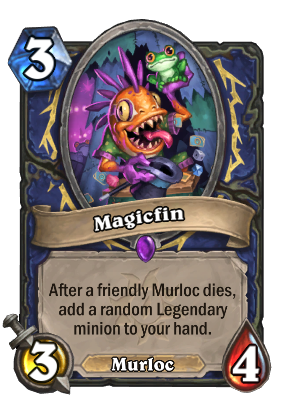 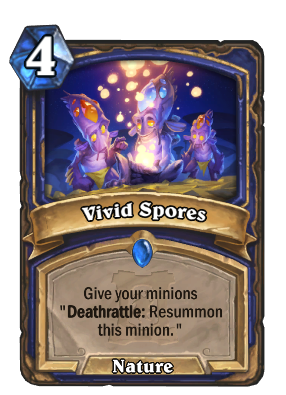 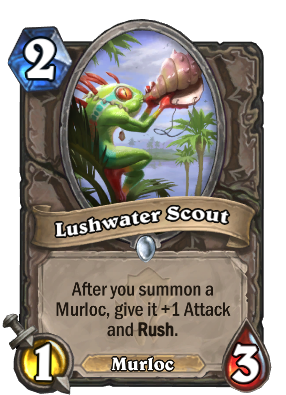 Magicfin is the meme-y soul of the deck and what helps separate it from more serious iterations. It is one of the many Murlocs in the deck with a soft-taunt effect, generating value as long as it is on the board. It works best when you end up trading your existing Murlocs into the enemy board.

Vivid Spores fills a very similar niche to Magicfin, generating huge amounts of value once you have established a board. Where Magicfin creates slower hand-value, Spores makes it on the board, making everything much stickier and more difficult to completely remove. This synergizes with several aspects of the deck is a bit less risky to play now that AoE removals such as Plague of Death and The Amazing Reno are out of Standard.

Lushwater Scout really brings the value from Magicfin and Spores together. In addition to helping the deck maintain board control against other minion-based decks, Scout lets Magicfin immediately get value from Murlocs you have in hand by giving them Rush. Since it gives any Murloc you summon Rush, it also nicely synergizes with Vivid Spores, Murloc Tidehunter, and Spawnpool Forager. 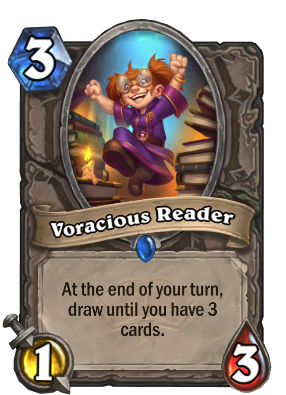 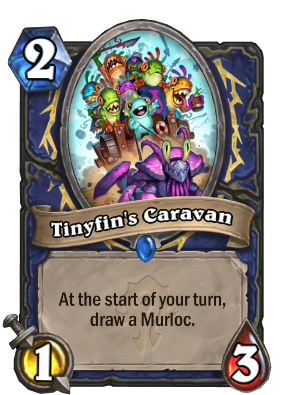 Reader and Caravan are the deck's sole means of draw, making them integral to keeping value and momentum going. Shaman is kind of hurting in major card draw and generation in any large methods, with some notable exceptions such as Cagematch Custodian and Instructor Fireheart. This deck runs neither and thus relies on the somewhat odd Tinyfin's Caravan to gain any semblance of card advantage in the early game. Reader on the other hand is fantastic for refilling resources, although it can clash a bit with value from Magicfin. 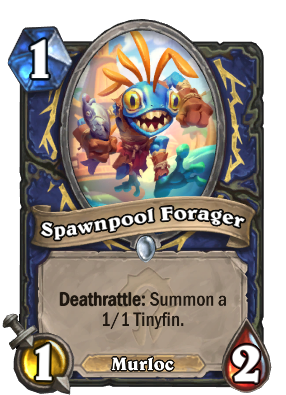 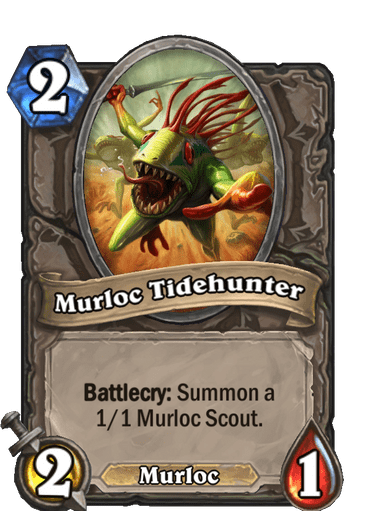 Both Forager and Tidehunter serve the same basic function, providing two Murlocs for the purpose of creating value from Lushwater Scout and Magicfin, as well as being generally good for swarming the board. Forager is a bit stickier and is nice in the early-game, although it doesn't represent that much threat. What it lacks in immediate threat, it makes up for flexibility by being a 1-mana Murloc to weave in easier with Firemancer Flurgl and Scout. Tidehunter meanwhile synergizes about as well with Scout, but works much better with Nofin Can Stop Us. 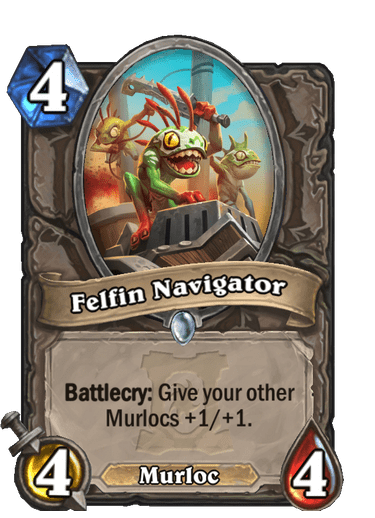 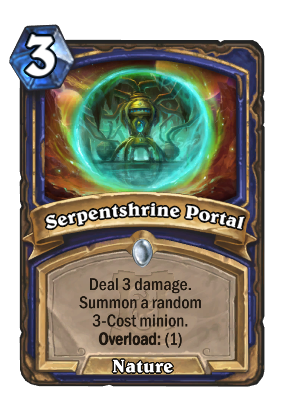 Definitely one of the cheaper meme decks I've highlighted here, with Firemancer Flurgl being the only legendary in the list. As such, replacing him can be a bit awkward since whatever you include will also only have one copy, unless you decide to drop something else as well. Felfin Navigator can be a tad slow (glances at Vivid Spores), but it certainly supports the win-more philosophy this deck strives to achieve. Going in a different direction, Serpentshrine Portal is a generically powerful card that can keep up board pressure while also providing potential for face pressure. Another generically good card that you'll likely see suggested often is Mankrik. Everyone got Mankrik for free and his text is hilarious, made even better by actually being a good card that fits almost anywhere. 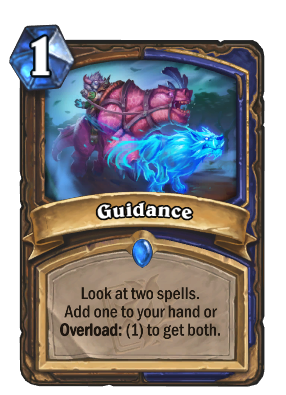 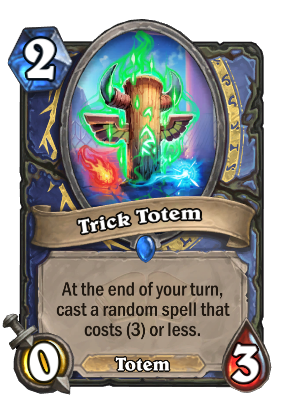 Although Magicfin is the only Epic in the list, it is unfortunately also a key card to making this a meme deck. Since it can be replaced with two cards, unlike Flurgl, so we can go for some cards to help amp up consistency. Guidance is pretty nice at being a situational answer to things. The ability to search for burst damage or removal can be very handy in many situations. IF you want to pursue a far more meme-y and highroll-y route, I will always give a massive endorsement to Trick Totem. Trick Totem is fantastic for letting RNG take the wheel and praying that things work out. Otherwise, things like Felfin Navigator, Serpentshrine Portal, Stormstrike, or even Hex can be alright as they fit a similar mana-curve, if not a more flexible one. 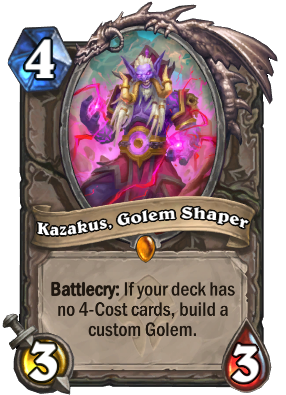 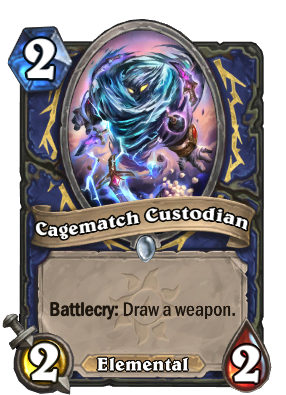 Since the deck has a single 4-drop in Vivid Spores, you could feasibly run Kazakus, Golem Shaper in the deck as well, although it may be better to remove Spores entirely if you decide to do so. Kazakus is exceptionally powerful and can provide some very nice mid-late-game value/board presence. If you want to keep the Vivid Spore dream, then Cagematch Custodian + Whack-A-Gnoll Hammer or Doomhammer to fulfil the typical Aggro gameplan. It's a bit less meme-y, but it is a bit more fitting for an Aggro deck.

Last but not least, I cannot continue this series in good conscience without providing an optimal replacement for Nozdormu the Eternal. Noz is the meme card to end all meme cards, a gentleman's agreement between players that things are gonna get stupid. In the Noz match, this deck has a slight edge being a fast deck, giving your opponent little time to figure out the optimal answers. Vivid Spores is the optimal replacement since it is the highest cost card in the deck and the hardest to play in general. Going forward, I will be making sure every article at least mentions the best way to squeeze Nozdormu, the Eternal into the list.

All the games are going to be pretty swingy, but this one will be determined earlier than others. They probably have an easier time rushing you down since they are more reliably built. This deck is going to be pretty reliant on Firemancer Flurgl and Lushwater Scout to keep up board control. Otherwise, this deck can buff minion health via Coldlight Seer or Nofin Can Stop Us to try to make favorable trades, but it does require the board to be set up earlier. Crabrider and South Coast Chieftain are both also pretty nice for keeping board control.

Definitely the hardest matchup. This deck can have some pretty explosive openings, like Spawnpool Forager -> Lushwater Murcenary -> Nofin Can Stop Us and can kill opponents very quickly if the stars align. That's kind of what you're hoping for here. You can technically try to get value from Magicfin, but that means stockpiling Murlocs in hand to trade-off with Lushwater Scout and Magicfin combination. Using Lightning Bloom to cheat out Vivid Spores when you have established a board can be absolutely backbreaking and can snag you a win, unless they have a couple decent board clears.

The most favorable matchup in theory, but I wasn't able to fight one in my testing. Pretty straightforward, rush them down as soon as you can. Just use Magicfin as a 3-mana 3/4 tempo without worrying too much about its effect. Value is great and Magicfin is the heart of the meme, but if you can't kill the opponent fast enough, you'll simply perish.

If I had a nickel for every time I made a Memes and Dreams for Aggro Shaman that counted on random legendaries, I'd have two nickels, which isn't a lot but it's weird that it's happened twice. The deck fluctuates greatly on the pendulum from feeling like a competent Aggro deck with a fun twist, to feeling like utter garbage if you've run out of fuel and simply don't draw into your Voracious Readers. That said, it's pretty nice when you do finally get the Magicfin pop-off and generate a bunch of random legendaries. The pool of random legendaries became quite a bit better after the rotation and introduction of the Core set, but you'll still hit some duds like Ysiel Windsinger. 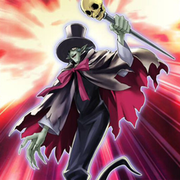