A few days ago, Hearthstone Developer Alec Dawson talked about a future incoming balance patch that will address some of the problems that are currently afflicting the meta. While they didn't mention that these changes will address both Standard and Wild, we know from a recent Q&A held on Iksar's Twitter (here's the full transcript in case you missed it) that some archetypes are under close observation.

While we wait for Team 5 to do their job and find the best way to improve the game, let's try to predict some of the moves we may see in a couple of days. In this article, we'll showcase a list of nerfs we (or the Hearthstone community) deem likely to happen.

Beware: We're not saying all these cards should and will be nerfed, but rather that each of them appear to be problematic in some way. In fact, our intention is not to murder Paladin a class, but rather identify what will be the next targets on Team 5's list. 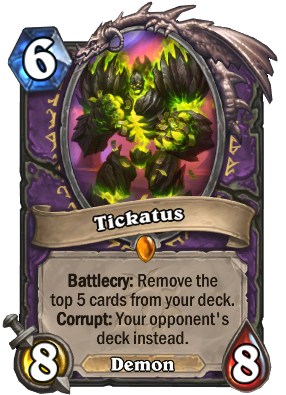 Probably the most hated card in the current Standard meta. While it's easy to understand why players hate to play against a deck that is able to melt a third of your deck, it has to be said that Control Warlock isn't definitely a top tier archetype, and people are overestimating the game-play impact of Tickatus: in fact, most of the times burning 5 cards from your deck doesn't stop you from going face and kill your opponent: unless you're playing Control Priest player, Tickatus should not represent a problem most of the times.  However, the psychological impact seems to be a totally different topic: players love to play Tick even though it's bad and players hate to see their deck milled even though they're probably still going to win.

If a change is going to be delivered, and with each day that passes we're becoming more and more convinced that Team 5 will be forced to intervene, it is very likely going to be because of the feeling this card delivers to the offended and not because of meta-relevant reasons.

Control Warlock is already a slow deck, but bumping Tickatus up to 7 mana will definitely question players whether it's really worth running it and, if the answer is yes, they're going to find even less success with it. 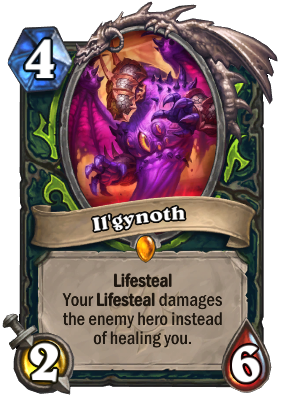 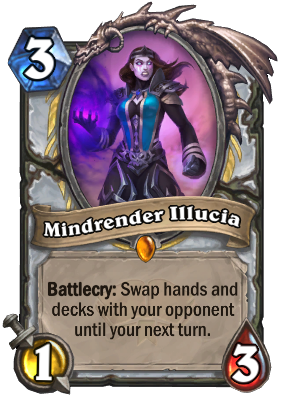 For this suggestion, we have to thank Ridiculous Hat and Zach_O from Vicious Syndicate, who discussed the upcoming balance changes in the last episode of their Podcast - go check them out if you have the chance! Now, for what regards the topic of this article, if Tickatus gets hit as we suspect and Control Warlock will (finally) decrease in popularity, then Lifesteal Demon Hunter and Control Priest will have an easy life, given that one of their most difficult matchups is the one against Gul'dan.

Tickatus is a key card in winning matchups against a combo deck like Il'gynoth DH and Control Priest cannot really generate much board pressure, so the fatigue game is quite relevant. Based on this scenario, there amount of non-games you'd face on ladder would exponentially increase: if you couldn't stand Tickatus Warlock and No-Minion Mage, then you won't appreciate this hypothetical meta. However, you can't really nerf a card without touching the other as well. Therefore, these changes would be preventive rather than aimed at solving current metagame issues.

Il'gynoth - Getting killed from 30 on turn 7 is not fun, especially if until that point you're the one winning the game. Il'gynoth is quite a unique design and synergizes very well with the tools Illidan has at his disposal, but the amount of cycle the deck has, and the (very likely) decrease in popularity of Tickatus Warlock will greatly increase this deck's performances. We, therefore, suggest to completely change the role of the card: keep its effect as it is right now, but bump both its stats and mana cost so that it will become more of a snowballing threat to remove at all costs rather than a potentially unstoppable combo piece.

Mindrender Illucia - Increasing her cost to 3 mana a few months ago has not stopped the card from seeing play, being very relevant and triggering a large portion of the community. With Illucia playable, players often lose their ability to plan resources ahead of time or save up some answers for later in the game - you just swap hands, dump most of the threats your opponent is saving up and you're good to go: you don't care if your opponent will get rid of your Holy Smites or your Condemns, as he won't be able to be dangerous to you from that point and that will allow you to bring the ball on your side of the field.

While trying to increase Mindrender Illucia to could be a rather simple, yet effective solution, famous Wild player Corbett has another suggestion: what do you think?

Thinking about incoming nerfs: change I’d like to see for Mindrender Illucia is something like “Battlecry: Replace both players’ hands with copies of their opponent’s until you next turn.”

Takes away some of the most extreme polarising aspects of the card, but keeps the initial flavour.

Suggested change: Health decreased from 4 to 3. 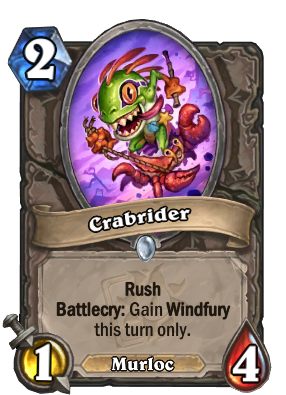 Another change people have been begging for quite a lot, and day after day even the most hesitant players (including myself) are beginning to agree. Even though it's undeniable that a decent chunk of Crabrider's strength comes from the ability to insta-buff it in order for it to snowball out of control in the very first stages of the game (yes, Hand of A'dal, we're looking at you), there's no way that this minion isn't an outlier by itself.

The 4 Health stat is remarkable by itself when attached to a 2-drop (Shadowjeweler Hanar and Efficient Octo-bot send their regards), and its even crazier when it's combined with two keywords that go incredibly well together. Reducing Crabrider's Health total to 3 will make it a lot easier to manage, as there are a lot of ways to instantly kill it even if played on curve on an empty board; Holy Smite, Drain Soul, Soul Shear and Quick Shot are the most common examples, but we can definitely go on.

Paladin's early game is definitely too strong at the moment and, even though this card is Neutral, it should get hit in order to nudge down Uther's power level and to prevent Crabrider itself to become problematic in the near future, maybe with another class since it sees solid amounts of play outside of Paladin too. 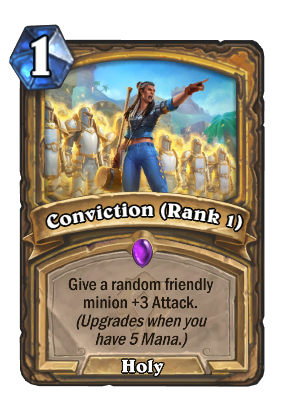 Hand of A'dal is not the only card that pairs up well with Crabrider. While Conviction (Rank 1) is pretty much a worse (but not terrible) Blessing of Might, once it gets upgraded at rank 2 it's basically a 1 mana Bloodlust which is pretty damn good f we can say so, especially with an early game as consistent and as efficient as the one currently at Uther's disposal.

We're uncertain about what solution would be better for this case: while reducing the buff to +2 Attack would slow down the card, we are afraid that increasing its cost would be too much of a hit towards Conviction (Rank 1)'s viability. 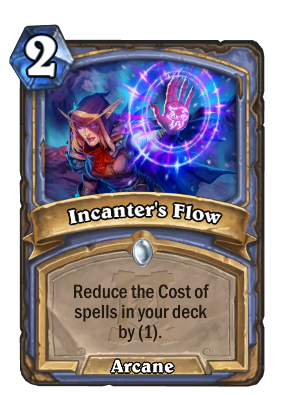 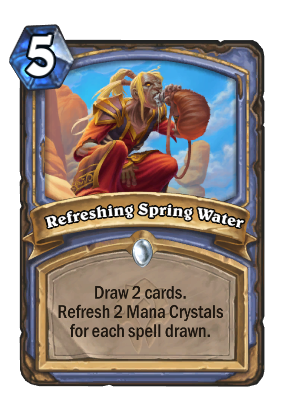 Deck of Lunacy's nerf took away the feeling of helplessness from a match against No-Minion Mage, but that hasn't changed the deck's ability to generate insane tempo swings. Late March's massive rotation together with the release of some new and powerful toys are more than enough for Mage to still be competitive and borderline problematic.

Incanter's Flow - Getting a Flow (sometimes even two if you're lucky skilled) on curve creates the deck's consistency as well as makes it very polarizing. I don't remember where I read it, but someone rightfully observed that not hitting Incanter's Flow makes No-Minion Mage feel like playing a bad Arena deck, which is a feeling we totally agree with. While the most reasonable change would be increasing this spell's cost to 3 mana in order to prevent its Prince Keleseth-like effect, people also suggest giving it the Summoning Portal treatment: Keep Flow at 2 mana but don't let it reduce the cost below 1 mana.

On a side note, this card is also a centerpiece of one of Wild's current tyrants, APM Mage - a deck that relies on cycling through the deck, playing Sorcerer's Apprentice and Flamewanker and burst down the opponents out of thin air. A change to Incanter's Flow can be potentially beneficial for our Wild friends too!

Refreshing Spring Water - This card seemed bonkers during the reveal season and ended up being even more insane when Forged in the Barrens was released back around a month ago. Not only it is a Pot of Greed in No-Minion Mage, but if you previously discount it with Incanter's Flow you actually gain mana, which is fun but very, very powerful. Assuming Flow won't get touched (which is very unlikely, since reducing Flow's power level will also adjust RPW), there are two reasonable changes for this card: you either decreased the Mana Crystals refreshed or increased its cost - in both ways, the card won't be able to "pay for itself" when cast, and will slow down Jaina's relentless cycling through her deck looking for burst.

Suggested change: Mankrik, Consumed by Hatred's Health reduced from 10 to 6 (or 7). 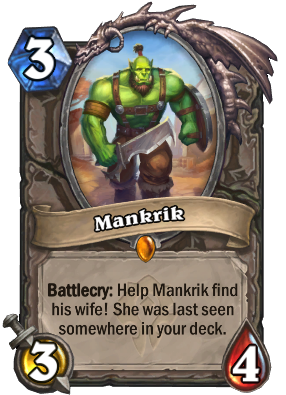 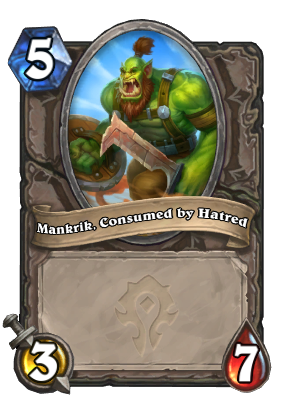 Quite the interesting change here. Just to make sure we're on the same page, we're not talking about Mankrik because we think he's an overpowered card that is able to break the game by itself alone. However, this minion is played in pretty much every single deck that can afford running it (probably the only exception is No-Minion Mage for obvious reasons): we're talking about a 3/4 for 3 mana, which is basically a Spider Tank; on the other hand, it brings an upside that needs no deckbuilding restrictions and doesn't consume your draw (there's even neat synergy with Barak Kodobama.

The problem is when Mankrik, Consumed by Hatred comes into play in the very early stages of the game: not only it deals a nice chunk of damage to the opponent's face, but it also brings a remarkable 3/10 body, which is very difficult to get rid of and forces most aggro decks to sink quite a lot of resources into it.

Even though the card is not incredibly problematic right now, we think that lowering Pissed Mankrik's Health to 6 or 7 won't harm the unit's power level but will just make sure that it won't cause too much of a swing if you happen to immediately find her wife's corpse.

Here is a shortlist of some other cards players happened to dislike for various reasons and, even though they are not particularly problematic right now, they might become in the future:

The overall quality of 1-drops has spiked since March's rotation, and this spells grants Paladin extremely solid early games as well as targets for Hand of A'dal.

Be honest, playing it on Blademaster Samuro is a 2-card Reno Jackson with an Overload-less Lightning Storm attached to it.

Partially the same issue of Crabrider: being a 2 mana 1/4, you have little to no chances to see it killed right off the bat, especially if on coin. In this case, Octo-Bot's Frenzy is almost always guaranteed to trigger, with very few cards denying the mana discount (Devolving Missiles is the most prominent example).

What do you think about these suggestions? What cards would you like to see changed? Let us know in the comments below!