Masters Tour Orgrimmar is currently underway, including many notable participants along aspiring up-and-comers. The broadcast itself can take up to 11-12 hours just for a single day of competition, so it will be a while before we can see who starts coming up on top. But just as the Swiss rounds were about to begin, all the lineups started becoming available for everyone to see. That means there is a wealth of data for us to look at!

Keeping Up to Date

If you'd like to check who brought which deck or track their personal results as they go, head to one of these places:

Now, there are hundreds of decklists out there and it would be downright impossible to go through them all. Although anyone so inclined is certainly welcome to try! Remember that many of those players pour hours upon hours into all kinds of testing and preparation, often as a part of larger practice groups. They try to predict meta trends and react accordingly - sometimes by coming up with counter-lineups, other times just by settling on their perceived strongest selection of four decks. 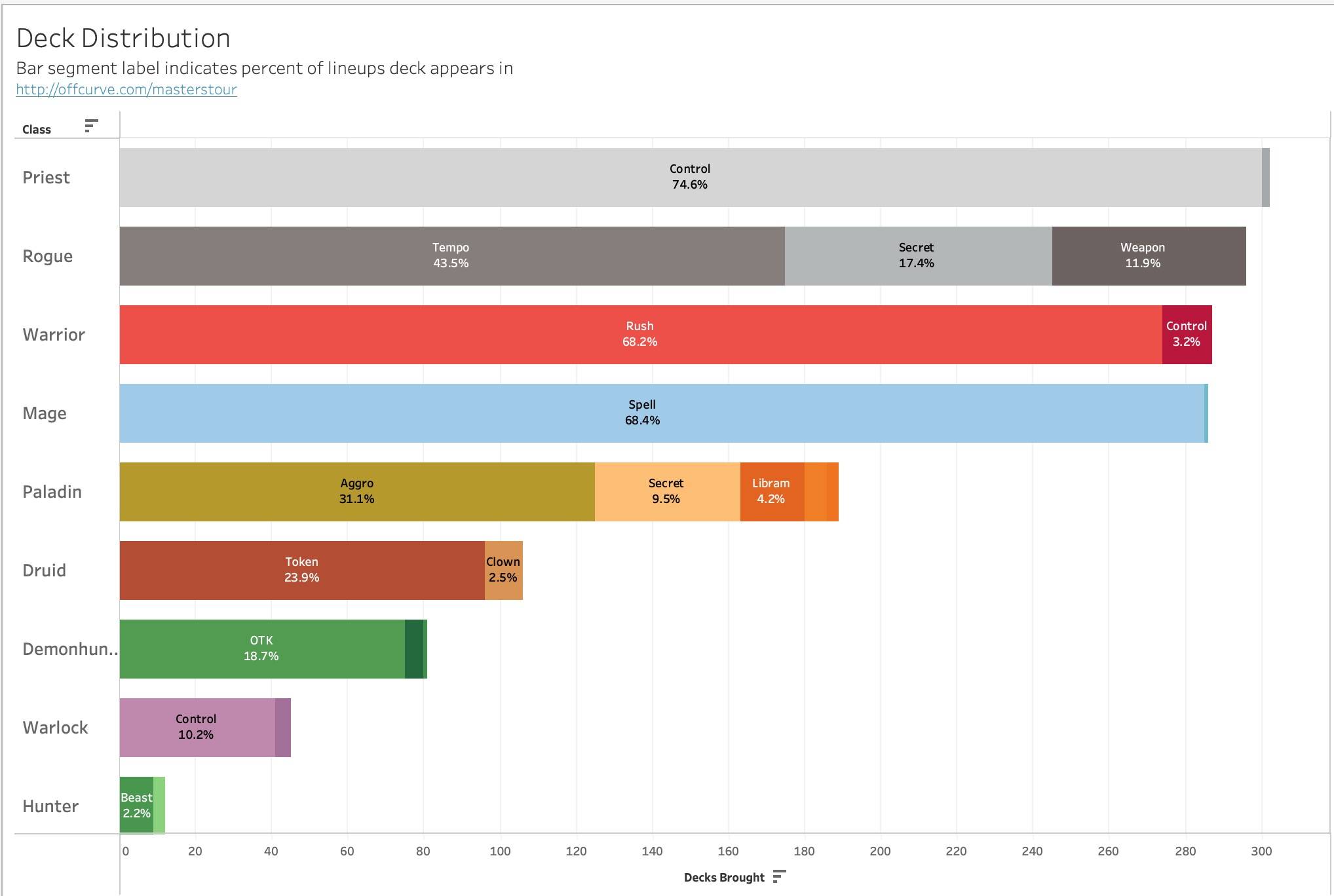 This is telling. (Source)

Most popular trends can be clearly seen above. Aggro Shaman is actually there too, just cut off - at 0,5% (as brought by whole two people). Sad times.

Here we will just pick a handful of recommendations that might prove good or at least interesting enough to play with. Consider it some fresh choices for the weekend - be it for the final hours of climbing towards that desired ladder rank as April Season wraps up today, or to hit the ground running as fresh May Season starts tomorrow. Who knows, some of them just might take over the meta in the coming week, or further solidify their already strong standings.

Disclaimer: As always with tournament decks and lineups, not everything has to translate well to ladder (you can't ban your worst matchup, after all). If you keep running into a specific deck that seems to counter yours, switch to something else! It's all about flexibility.

Mostly Token kind, with the same cards we might as well have all memorized by now. So instead let's have a look at the more refreshing, clowning route as taken by BabyBear:

Not rated very highly by most competitors, even though it's been one of the staple ladder darlings. Kranich is one of the very few who decided to run with that Face variant:

Spell Mage with no minions still enjoys a lot of popularity. Not everyone seems to mind the recent nerf to Deck of Lunacy, as we've seen some inclusions of it again. Even though many lists seem to do just fine without. But it's all well known at this point, so instead we will look at Spell-Damage variant with Aegwynn, the Guardian that stays under the radar. As brought by OtsunaFR:

There is a sizeable representation, but clearly not that loved by everyone. We don't want any Secret or Libram nonsense, Aggro is where it's at for ladder at least (I managed to hit the achievement for 12 ranked wins in a row between Diamond 5 and Legend with a variant of it, so clearly I'm a little biased here). The list from Faeli:

Very popular, it's almost all variations of Control Priest (with an odd Miracle list here and there). Some people have decided to put their faith in Yogg-Saron, Master of Fate. Others remain faithful to C'Thun, the Shattered. Then there are just as many takes without either (all solid as long as you don't run into Tickatus). From Americas Grandmaster Languagehacker and Priest stan Zyrios, respectively:

Turns out Secret Rogue isn't as universally appreciated as we might've thought. Tempo/Miracle variants came out in force. Here is one from Crane333:

Most Rush Warriors are similar to one another, and we've covered all that recently here. You can't go wrong by running their variations on ladder. But as for something else, here is a daring Control Warrior take from APAC Grandmaster Bankyugi:

OTK Demon Hunter tends to be picked for tournaments, but it rarely does that well anywhere else. As such, not going to include it among any recommendations. Can be really inconsistent and difficult to play properly, especially when you don't know exactly what cards you might be facing on the other side.

Same with Control Warlock - it has its niche mainly for countering Priests and slower decks, so if that's your thing... the list remains largely the same. It's worth pointing out that a few madmen seriously brought Mill Warlock, which might make for great memes if nothing else.

And Shaman... rest in peace, our friend. If nobody can come up with anything strong, then we might really have to pray for some buffs. Or have to wait until the Mini-Set. Or both.

Surprised at this perceived class power level? Like anything that you see here to try out for yourself, or maybe got even better ideas and relevant observations? Share them with us below!