Four cards buried under the sand,

Waiting to see the light,

Let's just give them a hand,

To enlighten our mind.

Words couldn't summarize the main content better than this poetry. Let's start the action by finding out those missing four cards beneath the depths of sands to build up a perfect combination of 30 cards for another installment of "The Forgotten Wilds of Hearthstone" series. If you lost your way to the previous article due to the sandstorm, click right here. All can be found under the "The Forgotten Wilds of Hearthstone" tag at the end of the article. 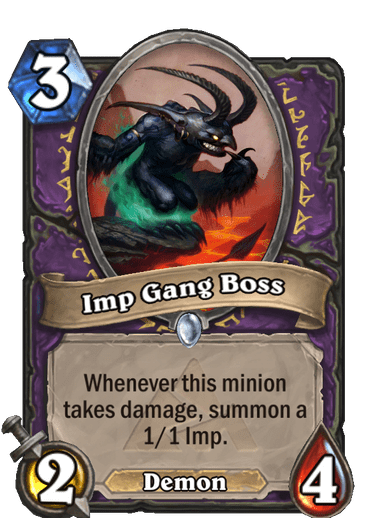 As a staple card for Zoolock before its evident rotation, Imp Gang Boss was an auto-pick since it was printed out. Roots of this card comes from the Blackrock Mountain adventure, which was released on April 2nd, 2015. The reason it was an auto-include until its rotation was the summoning of Imps with every trade, which would proc Knife Juggler to deal more damage. If needed, Power Overwhelming allowed these little Imps to be more threatening Imps, trading up to a level that would tackle Savannah Highmanes.

It's disheartening to see that Imp Gang Boss isn't as favored as it used to be. Once as a staple, now lost under the sandstorm due to gigantic pool of Zoo cards and some of these cards do the job better than Imp Gang Boss such as EVIL Recruiter. However, it doesn't stop us to find a befitting deck for it and it seems that eradicus crafted a Mech Zoolock deck, giving Imp Gang Boss a welcoming place.

Want to see your Imps Ganged Up? Well, look no further, gather up your Imps and click right here.

Consult your Dragons to Consort all Dragons! 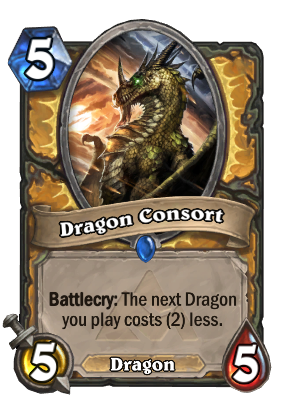 Another card from the Blackrock Mountain adventure. Discounting your next Dragon by two was so amazing that its ability was abused hard into Midrange Dragon Paladin decks to play as many minions as possible. Say, on turn 6, you could play Azure Drake and Blackwing Technician. Or, your board is full of minions and the lethal has been spotted by turn 7 thanks to Alexstrasza.

The reason why this card doesn't see much play in Wild is the lack of support for Dragon Paladin archetype compared to how it was in 2015. Sure, Rise of Shadows expansion added new toys such as Dragon Speaker and Bronze Herald but they didn't push the old-school Dragon Midrange Paladin as much as it was in 2015. However, it doesn't stop the OoC community playing with this yellow dragonflight as DreadKill wrote up a good article to reminiscence the good old days of Dragon Paladin.

Want to fly above the sky with Dragon Consort? More can be found right here.

Shadows aren't Fiends, They are Friends! 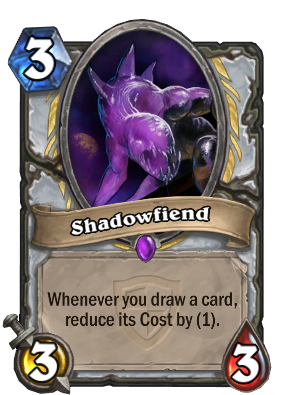 First of all, credit where credit's due, I thank frostheart for his interesting suggestion. Its ability is somewhat unique, yet when it was printed alongside The Grand Tournament expansion, it didn't see much play at all except during the first weeks of TGT-era in 2015, where everybody was theorycrafting/testing their Control Priest decks. Ultimately though, Hearthstone players decided that Shadowfiend was a bad card, simply because of Emperor Thaurissan being a better and viable choice when it comes to mana-reduction.

Despite being a trash card, I found a place for Shadowfiend, where Emperor Thaurissan could never be a choice due to the nature of the deck I made: Odd Priest. If Shadowfiend isn't dead or transformed by any means, it will act as a bridge, closing the mana-gap between odd-costed cards: You play it on turn 3, you draw 5-Mana card on turn 4, then you can play that card right away if possible.

If you didn't dust Shadowfiends, try these decks. 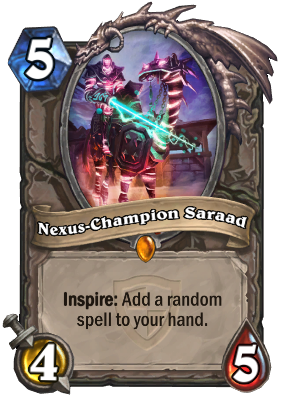 Time to negotiate with Nexus for more spells. Originated from The Grand Tournament set, which came out on August 24th, 2015, Nexus was played from time to time since his release. His popularity skyrocketed when Razakus Priest, known as Machine Gun Anduin, and as a variant of Highlander Priest that dominated Standard and Wild until the nerf of Raza the Chained. Rather than OTK variants done with Spawn of Shadows or Velen+Mind Blast combo, Nexus was here to refill your arsenal: Play cheap cards to replenish them with possibly useful spells while shooting at your opponent's face while in "Machine Gun" form.

Even after Razakus Priest was nerfed, it looks like that OoC community is tinkering with new decks around him. A deck from BaconPortal should be an ideal example to boost the elements of RNG thanks to the assistance of Nexus-Champion Saraad, and the king of RNG, Yogg-Saron.

Let's negotiate, you find a deck for him here, and he will let you live.

That's all for today for The Forgotten Wilds of Hearthstone. Let us know in the comments which cards you feel don't get the time of day anymore and until next time, peace out and stay tuned for more!