An update from the Hearthstone team this afternoon has given us the first-ever banned card in the Wild format - Stealer of Souls.

This is quite unexpected news. Although players have been complaining about the card since its introduction in the Wailing Caverns set since it sees nasty combos with Mal'Ganis and Violet Illusionist, when bad interactions between cards occur, the first step Blizzard has taken in the past is to nerf the card. Seeing as how this card can't be nerfed without an overhaul to how the effect works, removing the flavor, Blizzard has gone the route of Wizards of the Coast and Magic the Gathering and simply removed the card from the format. 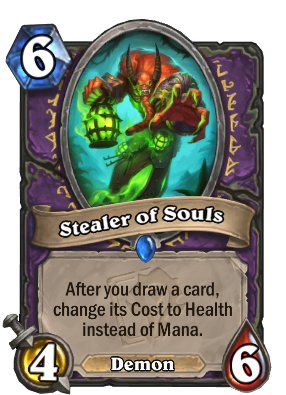 The card should be removed from Wild next week with a patch on Wednesday. Dust refunds will be available after the patch goes live and we'll get patch notes for the change on Tuesday, June 15. No other balance changes that will affect the Masters Tour Dalaran event are planned as per the Hearthstone Esports team.

Hearthstone's Alec has confirmed that the current plan for when the card rotates in 2023 is to make a change and remove the ban. If they decide to make adjustments to card before then, we can expect Blizzard to reconsider the ban.

We’ll be banning Stealer of Souls in Wild in a small update next week. Stealer of Souls will still be playable in other formats, and will be eligible for a full dust refund for two weeks after this change goes live.

The patch note for this change will be shared on Tuesday, and the patch itself is expected to go live on Wednesday.

Current plan is to adjust the card at that point in time and remove the ban. If any adjustments happen to Stealer of Souls before that (ex/ a standard nerf) we'll also re-evaluate its inclusion in Wild. (Alec)

FYI - there will be no balance changes that affect Masters Tour Dalaran before the event, (HSEsports)