We've now seen all the new cards for the upcoming expansion, along with an update to Duels that allows you to mess around with some of them early! It'll be a little bit tricky to judge so many cards at once, but do take a look at them all in our expansion guide and see what you think. Pay special attention to the Tradeable cards - that'll help you in this week's competition!

Conversation this week takes a look at another digital card game that's finally using the space to its full advantage.

Congratulations are in order for the winner of the latest WCDC, Arkasaur and The Wereloc! 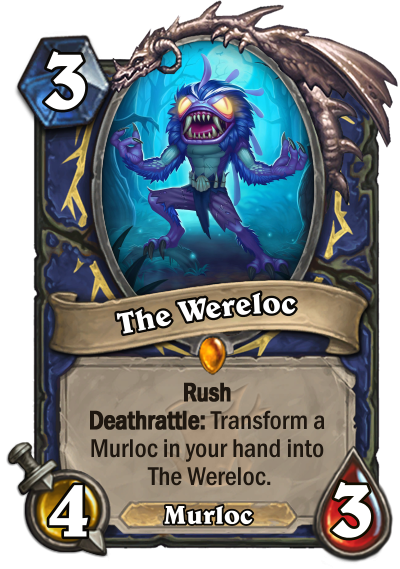 They'll be in charge of the theme for the first competition of Season 4, whenever that may be!

The Fan Community Spotlight turns its attention this week to MrRhapsody's Shapeshifter Class, a custom class with some very unique ideas. 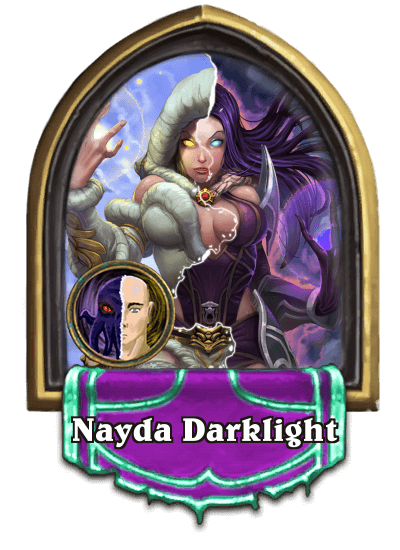 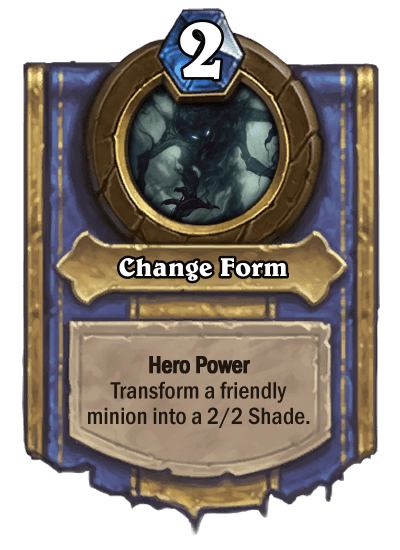 Nayda Darklight - if that is her real name - is a shapeshifter hellbent on becoming an Old God. She leverages her powerful abilities to transform her own minions, her opponent's, and even herself over the course of the game, leading to a very unique style of gameplay.

Of course, her minions know how to take advantage of their ever-shifting nature, and have adapted to react to a transformation via the Morph keyword. Whenever a minion with Morph transforms, its effect activates, giving you some powerful advantages in addition to the new minion you've just created. 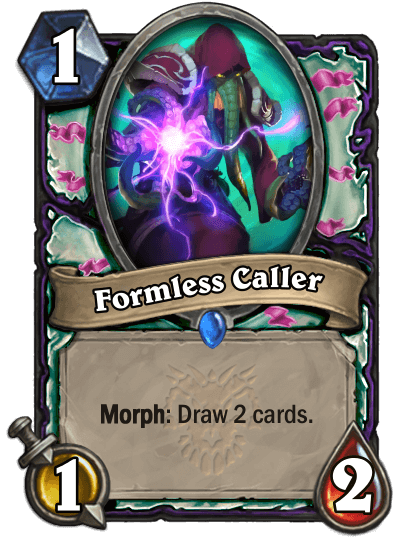 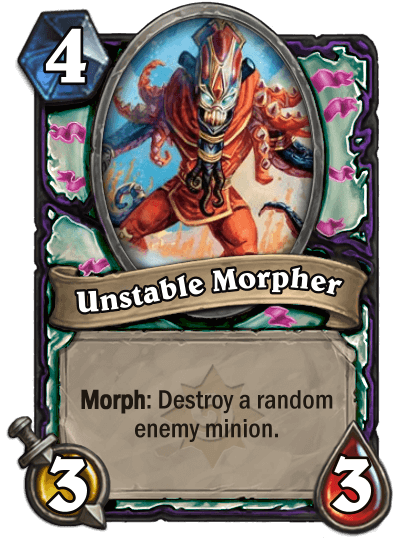 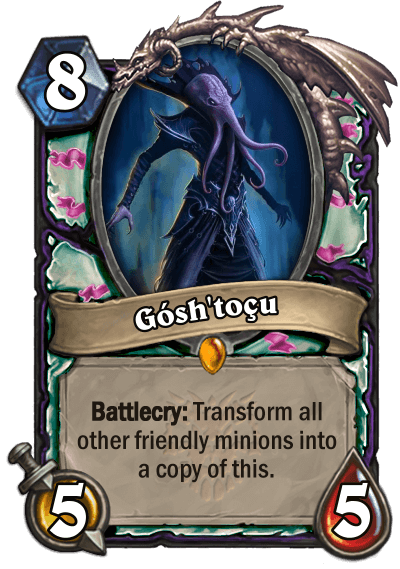 I really like this custom class, because the mechanical space its playing in is very uniquely its own. Sure, classes like Mage and Shaman have their own transformation effects that are variously disruptive or enhancing, but this class focuses in on it and turns it into something that occurs throughout the whole game. Sometimes you'll want to transform something for its Morph effect, even if that might end up making it weaker.

The class has some other very interesting ideas, but I'll let you check out the article at the link above to see them. Make sure you also click through to see the full set!

Something very interesting has been revealed to be happening to Magic: The Gathering Arena in the next few weeks - a new set of Arena Exclusive Jumpstart packs are coming, featuring nearly 400 new-to-Arena cards and - most interestingly - 31 completely new cards, leveraging the digital design space of Arena to come up with new mechanics that simply couldn't work in the physical card game.

Needless to say, this has rustled a few jimmies in the Magic community, with some complaints about adding random elements to the game ("just like Hearthstone!") and others annoyed that the digital game will now be diverging from the paper game irreparably. 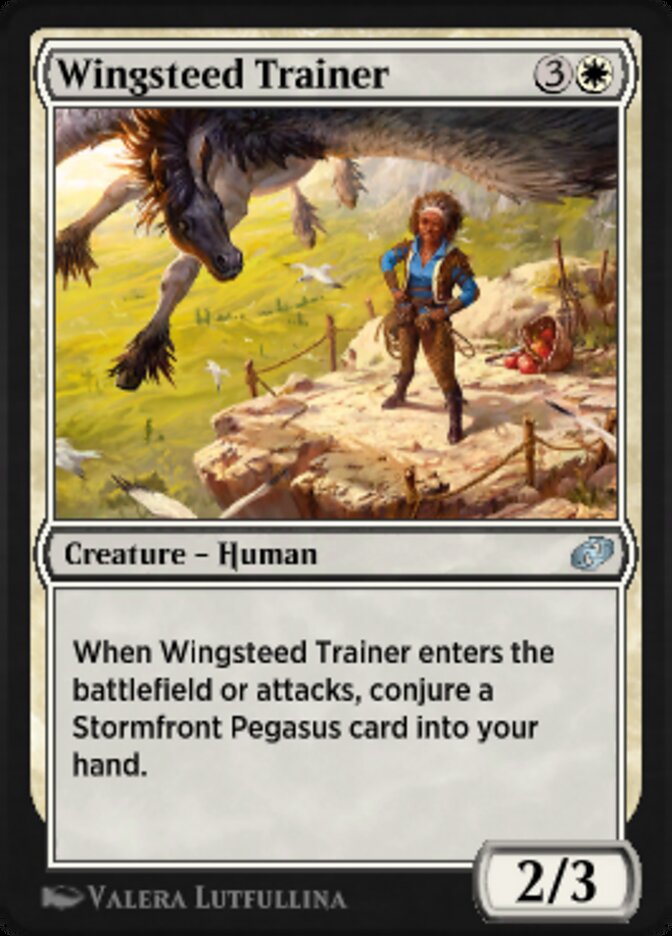 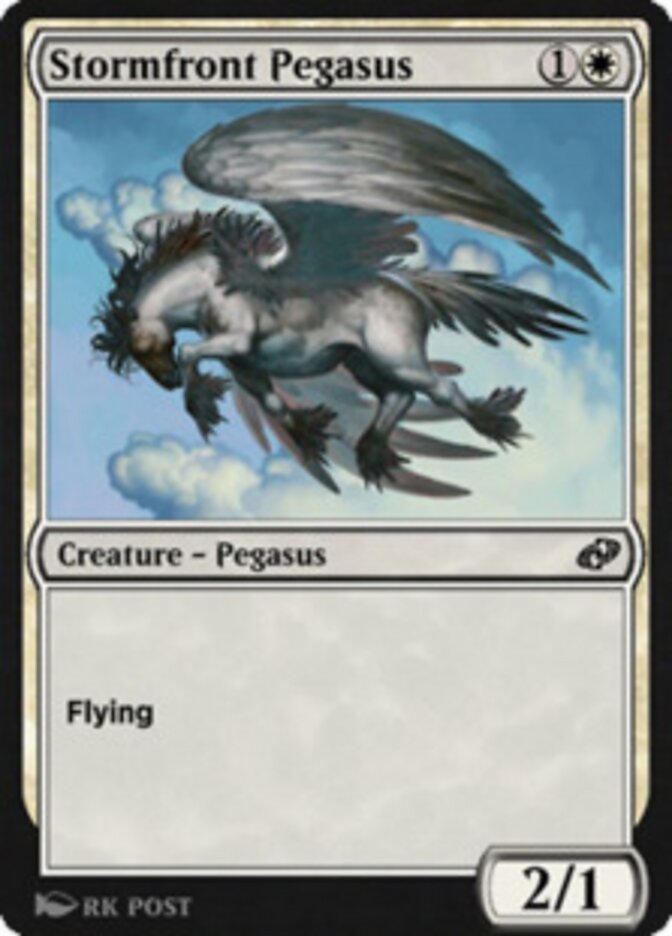 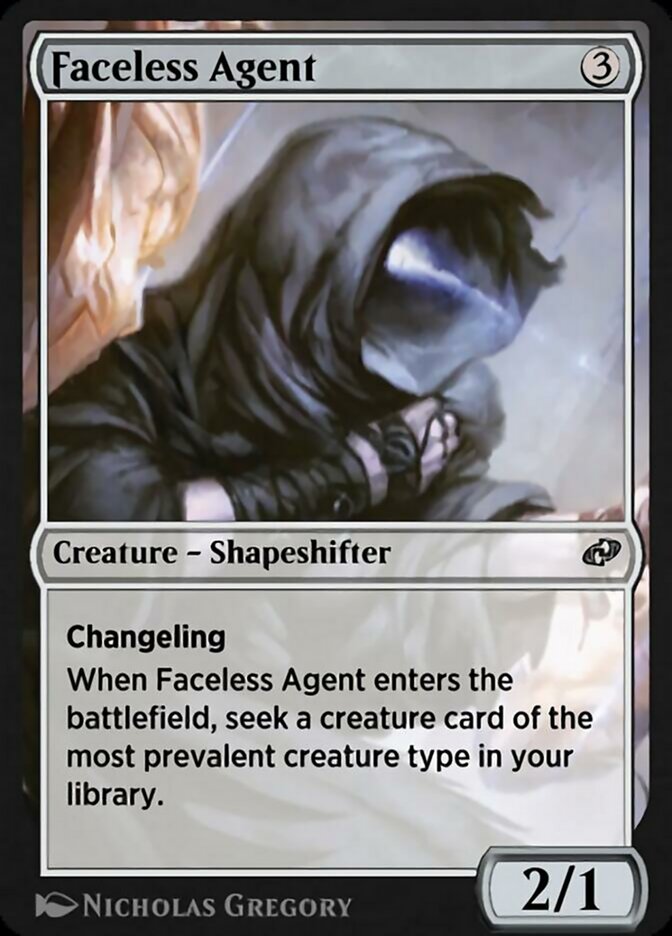 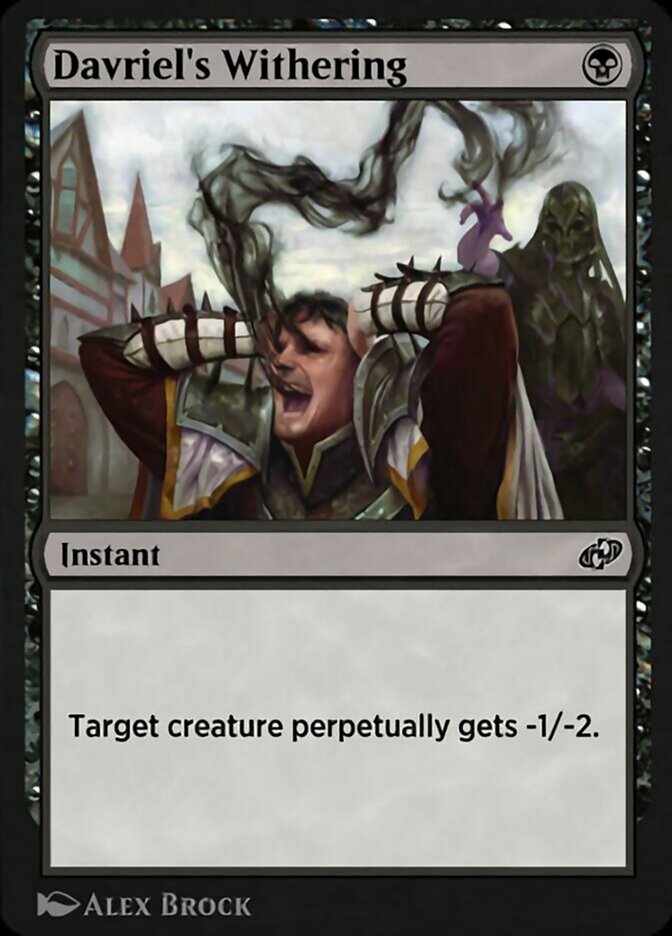 These are some examples of the 'digital only' effects that are being added to Historic and its associated variant formats. Historic is MTGA's "Wild" equivalent - any card that is on MTGA is playable in Historic, unless it's been banned. MTGA has the distinction of injecting cards directly into Historic via various Anthologies and Remasters, and now through Jumpstart: Historic Horizons.

To 'conjure' a card means to create an actual copy of that card. It isn't a token that would only be able to exist on the battlefield - it can be added to your hand, sent to the graveyard and anything else that a normal card could, something that the physical game finds difficult to track and simply doesn't really have the rules for.

'Seeking' a card just means drawing a card that matches the criteria from your deck. To a Hearthstone player this must seem pretty boring, but being able to do this without laboriously shuffling your library and without revealing to your opponent what card you drew (so there's no chance of shenanigans) is something that just isn't possible in a physical card game.

Affecting things 'perpetually' is perhaps the most interesting of the new mechanics. This means that no matter where a card goes - shuffled into your library, bounced to hand, sent to the graveyard - it will maintain the buff or debuff. In the case of Davriel's Withering above, that means that if you tried to bring something back with less than 2 toughness, it'd just die again straight away. This sort of thing would be nigh impossible to track and corroborate in a physical game, but is handled so simply by the rules engine of a digital game. Hell, just try to imagine how you'd get this week's WCDC winner to work in a game of Magic!

I love seeing them pushing into this new design space. Historic was already a digital-only format that had no official paper support - and quite honestly the list of legal cards would be a nightmare to try and keep track of with how often they add random bits and pieces to it - and I think the spaces they're pushing are interesting ones that really expand the game into something more complex and exciting. There are definitely some concerns I agree with - Historic Brawl for example might want to ban Davriel's Withering for its ability to completely shut down some Commanders, and a couple of the Conjure cards might be a bit too broad in their options for some people's liking - but overall I think they've done a fantastic job with these.

For balance, here are the two most controversial of the new cards. 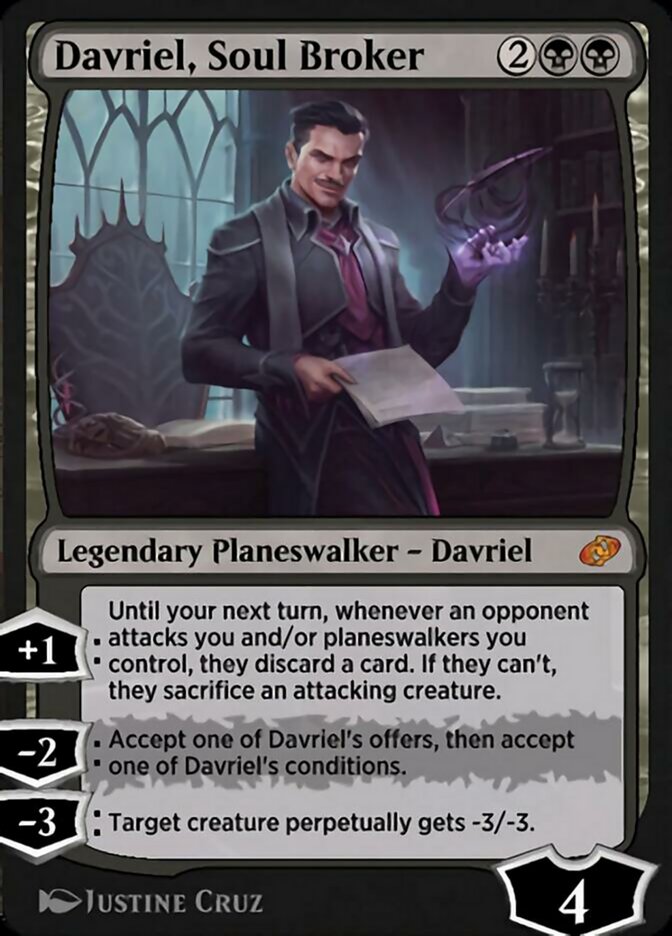 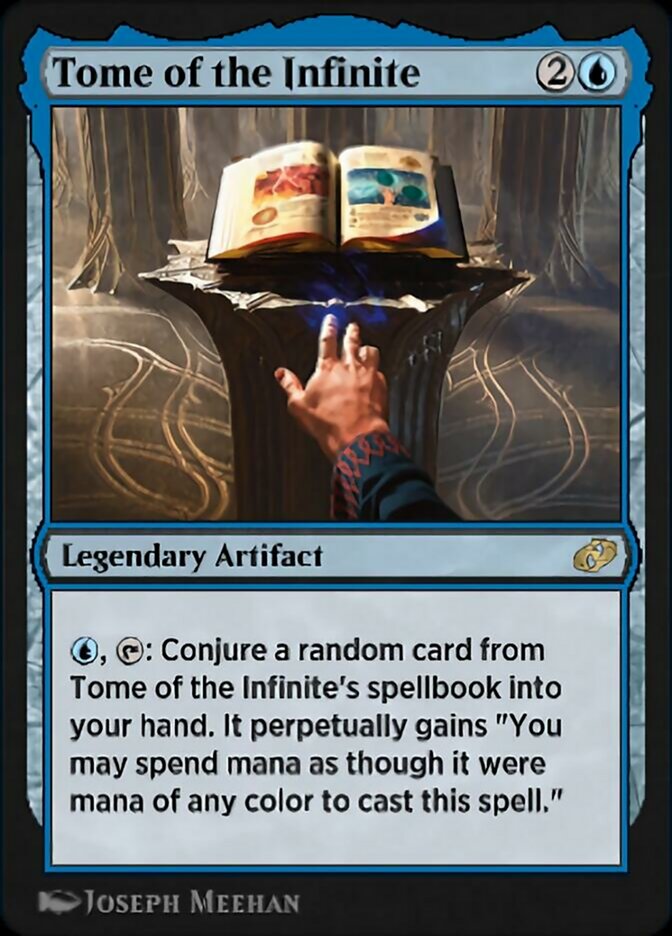 Davriel's -2 shows you 3 of 8 offers, and then 3 of 8 conditions, for a total of 64 different potential combos of effects of which you only see a few each time. The Tome, meanwhile, has a much smaller list of possible cards (only 10), but the variance of effects has some worried. The cards are particularly powerful ones from Magic's history, and many of them are effects Blue doesn't typically have access to.

Anyway, I just wanted to show these off because I think it's really neat to see MTGA stepping further into the role of a digital card game. I also just love the Jumpstart format and can't wait for it to return soon, especially with so many cool new cards to play with!

Start haggling and you might just find yourself a hidden gem to enter into this week's competition! Click the banner to find out what to bring.