Greetings, traveller! Time to read another chapter of "The Forgotten Wilds of Hearthstone" series, where we have a look at four long-forgotten Wild cards that were missing the action for a long time. We will give you some insight into the history of these cards and help you build a deck around them. With these relics, you might even find a meta deck. 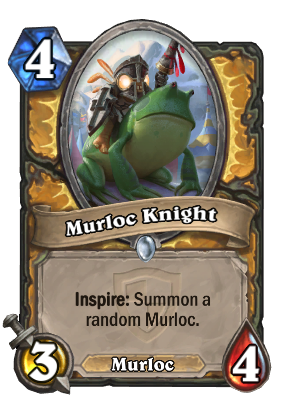 We're starting our list with Murloc Knight, a card from The Grand Tournament. This card was the first murloc card Paladins received that enabled a bright path to the well-known Murloc Paladin archetype. Although Murloc Paladin wasn't really a thing until the League of Explorers adventure hit late 2015, Murloc Knight saw experimentation due to its value.

When played on turn 6, your Hero Power would often summon one of the following murlocs due to the low number of them in the game.

Murloc Paladin became a real contender especially thanks to Anyfin Can Happen. Although this deck was based on OTK with Grimscale Oracle, Murloc Warleader and Old Murk-Eye in mind; summoning Murloc Knights with Anyfin Can Happen would show good results in the long run, all thanks to possibilities of summoning Murloc Warleader, Old Murk-Eye and itself as mentioned previously.

It would be even better to illustrate these points with a video. Time to reminiscence good and bad moments with Murloc Knight, dear members of Hearthstone community.

You are a knight eh... That sounds fishy!

However, it isn't surprising to see that there came a lot of reasons to not utilize Murloc Knight as much as time went by despite its potential.

Whatever comes our way, it's refreshing to experience Murloc Knight in 2019's Wild meta. Watermelon86 found a warm castle for our beloved fishy knight to stay in.

Clash of knights can be seen here! 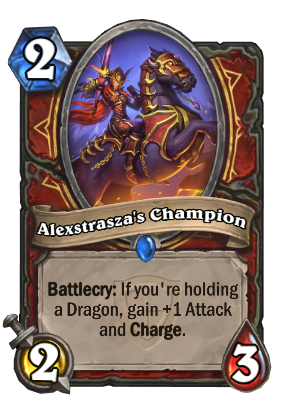 Now, a real knight in shining armor is charging ahead. Part of The Grand Tournament expansion, Alexstrasza's Champion was one of the key cards that helped shape Tempo Dragon Warrior. Any Charge card printed out until the start of 2016 was very valuable and she was no exception to this rule.

Thus, she was charging ahead through face to ensure victories. Check out this video from Thijs if you want to learn more about the original Tempo Dragon Warrior.

For the Lifebinder, watch this video!

As lots of AOE cards were printed alongside more heal cards, Tempo decks got weaker. However, that didn't stop Capn Davey charging ahead to grab his victory with the help of Alexstrasza's Champion.

If you want to see more decks with her, click right here! 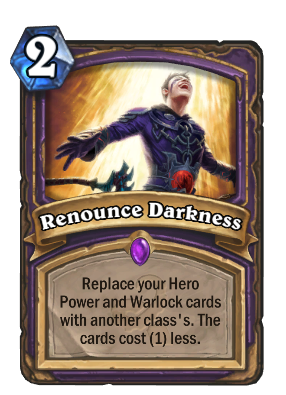 Darkness and RNG... Who would have thought to witness this? Belonging to Whispers of the Old Gods, everybody was quite surprised to see such a card introduced for Warlock due to its opposite nature. They are fast (Zoo) or they love to control anything (Bloodreaver Gul'dan) but RNG.

The reason why this card isn't that popular is its unpredictability. With all of your Warlock cards randomly converted into cards from another class, despite the cost reduction by one Mana, it isn't something Warlocks can really take advantage of. How can you be sure, if random cards will be better than your current deck? Unless this isn't assured, most players won't feel like taking that risk. Also, losing Bloodreaver Gul'dan would result into community screaming a big "NOOOOOO!" if that happened.

However, some Hearthstone players and streamers occasionally take a break from serious competition to have some fun with RNG, just like how they praise Yogg. Roffle is one of them, so let's have some fun by watching his video.

Bye Darkness, my old friend! You will be missed!

Also, Morkimus as well, who loves to "renounce victory" with style.

If you wish to embrace the Light by Renouncing Darkness, start the ritual by clicking here! 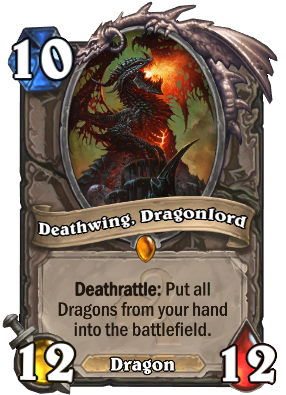 A knight - whether you are fishy or real - can escape from the Darkness but not from almighty Deathwing, Dragonlord. His effect, although slow to activate, could play well with the Year of the Dragon thematically, if we actually end up seeing Dragons added before next year. That begs the question, would changing his effect to a Battlecry be too strong?

GrovesKOfficial did an amazing job including Deathwing, Dragonlord in Big Druid deck with a Dragon package. How would you go about playing with Deathwing?

Do you want to turn your enemies into ash? These decks might help!

That's all for today. Let us know in the comments which cards you feel don't get the time of day anymore and you may see them in an upcoming spotlight. Until next time, peace out and stay tuned for future wild coverage!