The full set of cards dropping into the game with United in Stormwind has been revealed! As we always do here, it is time to review these new cards, this article focusing on how Rogue is likely to perform in the new meta.

Shaman is a bit all over the place in United in Stormwind, getting new cards in such a way that it feels like the "Best Of" Anthology playing all of Shaman's Greatest Hits. We've got cards that like Battlecries, cards that care about Overload, Elementals, and maybe even a card that fits in an Evolve deck? (The big one missing? Murlocs.) We'll be honest: It's a bit of a mess and hard to unpack, but that won't stop us from unequivocally declaring which ones are good and which ones aren't. Let's break down the categories, then get right into the reviews. 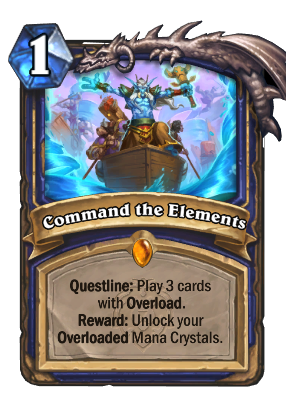 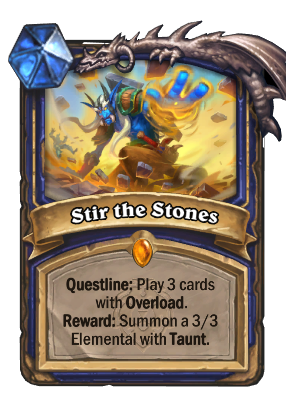 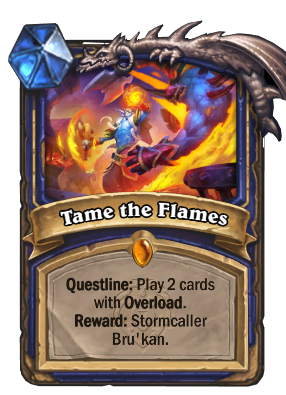 Command the Elements all you want, they still won't work overtime.

A Questline reminiscent of Corrupt the Waters in that both require you to play cards that you might have already wanted to put in a deck, and both reward you by repeating the effects of the cards you play. Heart of Vir'naal was an awesome way to gain value in a game, and we're hoping that Stormcaller Bru'kan can be a similar value engine. 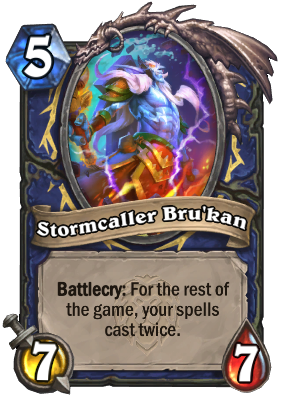 Getting two casts of a spell for the price of one is nothing to sneeze at, and Shaman has enough good Overload spells (and some minions) that the class should not have too much trouble building a deck that can finish the Questline. The main issue, as it often is for Shaman, is card draw. Other than Primal Dungeoneer, the class doesn't have good card draw, and that could be a serious problem if it wants to complete Command the Elements in a timely manner.

Once the reward is online, Shaman should have no trouble finding spells that like being cast twice, because all spells like being cast twice. Burn spells come immediately to mind, but a Burn deck would likely have ended the game before the Quest was even complete. Could Control Overload Shaman be a thing? We hope so, because Command the Elements is pretty neat and we would like to see it succeed. 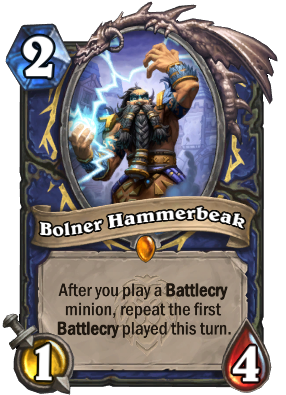 Keeps insisting that he didn't hear you the first time.

Bolner is not quite Heart of Vir'naal, but he's still a cheap way to get the same Battlecry multiple times across the same turn and that is definitely worth building around. There are a plethora of Battlecries to copy with Bolner. Mailbox Dancer has semi-infinite potential by giving you Coins whenever you play a Battlecry minion. Kindling Elemental and Granite Forgeborn can be a similar infinite train, but with Elementals. Kazakus, Golem Shaper doesn't even need other cards; he can keep grinding out 1/1 Golems until you run out of mana.

The main issue (and this might be a theme) is that Shaman's lack of card draw will make it difficult to gather a lot of Battlecry minions in hand to keep the engine running. Building a Bolner Hammerbeak deck might prove to be a challenge for that reason, but the reward is so exquisite that we should definitely try anyway. 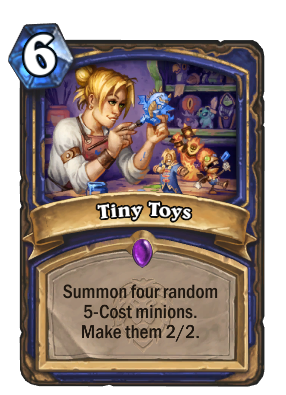 Bake him away, toys.

There are 65 5-Cost minions in Standard, and about 15 of them would be good ones to get from Tiny Toys: either they have a useful Deathrattle, a Spellburst effect, or do something unique like Ras Frostwhisper and Inara Stormcrash. The odds of getting at least one "good" 5-Drop aren't amazing, which makes us think that this card would fit best in a deck using Revolve or Boggspine Knuckles. Who knows, maybe it makes Evolve Shaman good again. 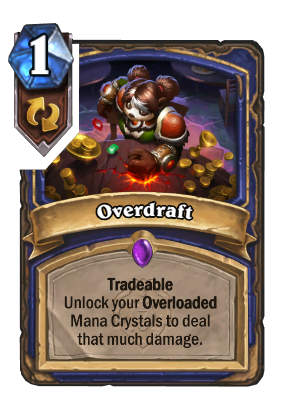 "What do you mean, I need an account here?"

Overdraft is everything an Overload Shaman could want in one card: It unlocks their mana crystals (the fourth card ever printed that can do that, including Command the Elements), turns Overload into damage, and can be shipped back into the deck if you don't need it at that moment. All that for 1 mana. 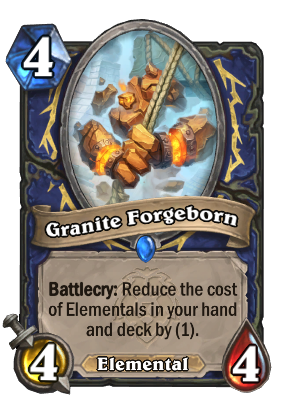 Never take your Elementals for granite.

Granite Forgeborn finds Elemental Shaman in an interesting spot: it's already a good deck with a stellar curve from 1-6. Maybe the deck has space for a Chillwind Yeti that gets Fire Elemental and Al'Akir the Windlord on the board a turn earlier. Granite Forgeborn has the potential to create some very big swing turns in the mid-game for Elemental Shaman; we've already seen some small hint of that with Kindling Elemental. An intriguing minion that has definite upside and should be worth a look in most Elemental decks. 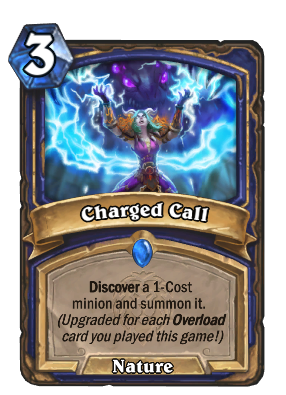 It's not a good sign when it goes straight to voicemail.

This card can do Some Stuff. The ideal is to cast it when you can find a minion that costs 6 or more, although the size of the minion pool will make it difficult to find the exact minion you want. The bigger issue is playing enough Overload cards to charge this bad boy up without falling behind on board or dying. The truth is that a single cast of this spell is unlikely to win the game for you, no matter how high its number gets, but plugging this into a dedicated Overload/Command the Elements deck as just one of its payoffs should be worth it. The dream is to cast Charged Call after Stormcaller Bru'kan comes down, and that dream could pan out just enough times that this spell has a place in the meta. 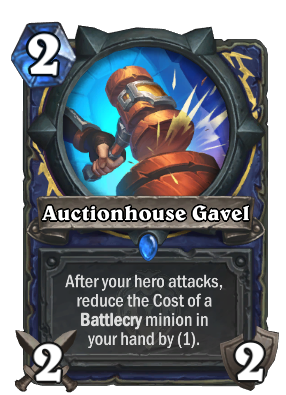 "Going once, going twice, SOLD! To the Firelord in the front."

A 2/2 weapon for 2 mana is adequate, so adding in the Cost reduction makes it worth a look in Battlecry decks. The Gavel can be played early enough that most Cost reduction will give you tempo when it matters most. We can see this as a tool for Bolner Hammerbeak decks stuffed to the gills with Battlecries; other Shaman decks are likely to stick to Whack-A-Gnoll Hammer and Doomhammer as their weapons of choice. 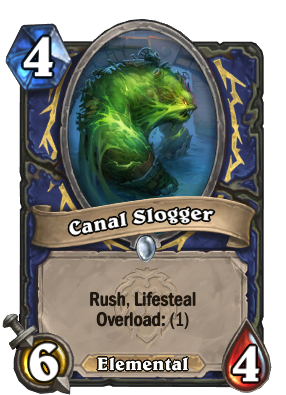 There's more than one way to beat the morning traffic.

Canal Slogger is a big, juicy monster and we love it. Rush and Lifesteal are always a potent combination, and when you slap those on a decently costed minion with high Attack, you're looking at a potential Shaman class stalwart. Use him in Control early to stave off aggression and regain some Health, or use him in a midrange Elemental deck to win the board while maintaining your Elemental curve. We think this card is really going places, as long as those places have canals. 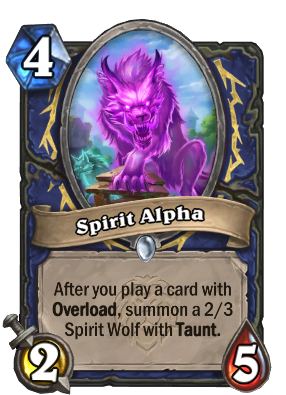 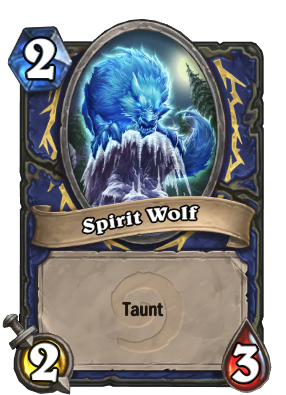 "Okay, who brought the dog?"

Spirit Alpha looks like the minion who's going to put Overload Shaman over the top, turning its cheap Overload cards into defensive dogs that protect not only your face, but Spirit Alpha as well. Because its tokens have Taunt, you can make it very difficult for your opponent to kill the Alpha, which means you can play more Overload cards the next turn and continue to summon some very good boys. Spirit Alpha is worth experimenting with, and could be one of the big reasons Overload Shaman works. 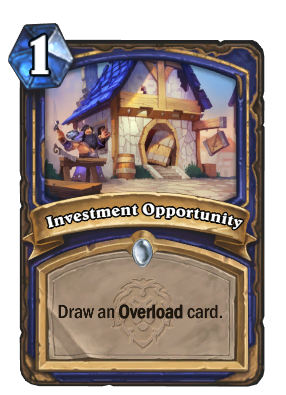 Investment Opportunity is a 1-Cost spell that tutors Overload, which is definitely needed in a class that is lacking card draw. This spell could definitely work in an Overload Shaman, tutoring the cards you need to complete Command the Elements. In other decks, however, it has too much of an anti-synergy with Primal Dungeoneer (Investment Opportunity is not a Nature spell) that those decks would likely choose to run only the Dungeoneer if it came down to an either/or. 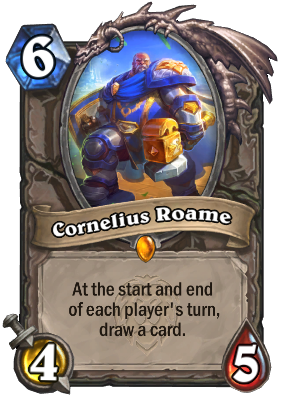 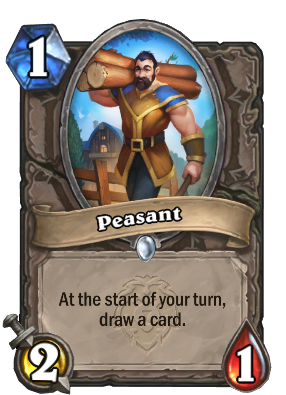 Shaman's lack of decent card draw looms over everything that it does, so Neutral minions who can draw deep into the deck are worth considering even if they look terrible at first glance. We admit that Peasant is a bit of a stretch, but at the low low cost of 1 mana it shouldn't be immediately discarded. Cornelius Roame is a 6-Cost minion who guarantees a draw of at least two cards, and his effect gives him soft Taunt against any opponent who doesn't want to see you draw all the cards. 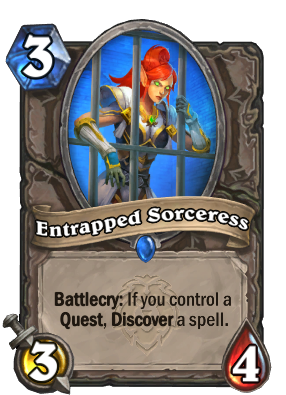 Entrapped Sorceress should be useful in Command the Elements, giving the deck an additional way to find Overload spells and complete the Questline. If she is included, she'll likely team up with Marshspawn and Instructor Fireheart to form a formidable trio of 3-Drops that feed Shaman's need for greed. 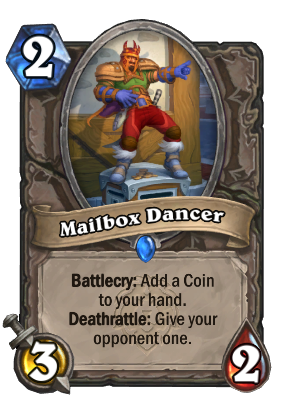 Bolner Hammerbeak, as mentioned, has good synergy with the Dancer, who can give the deck extra Coins to keep playing Battlecry minions. Either as an enabler, or the one being enabled, Mailbox Dancer should fit right into that deck. 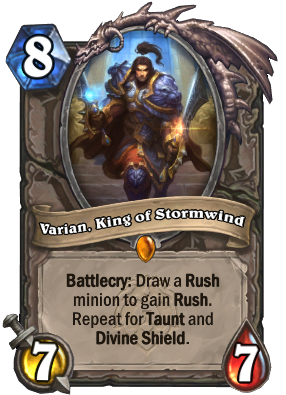 We don't know if you've heard, but Shaman doesn't have a lot of card draw options right now, and could really be looking for a solid minion (no matter how much he costs) that draws up to 3 minions from your deck. Varian, King of Stormwind already has synergy with Al'Akir the Windlord, Canal Slogger, and Taelan Fordring (to name a few), and he should be considered in slow Shaman decks (N'Zoth Shaman, anyone?) as premium card draw akin to Warrior's Ringmaster Whatley.

The card we're most excited to play with is Bolner Hammerbeak, so the deck we've theorycrafted for Shaman surrounds him with powerful Battlecries that he can repeat everytime we play another, cheaper Battlecry minion. It's all here: Mana cheating, cantrips, dead wives. Basically, what we've tried to make is a Rogue deck that is Shaman.

The big potential combo with Bolner is Mailbox Dancer and Pen Flinger. The point of this combo is that it's a good thing Pen Flinger can't go face anymore. We like infinite damage, so we're running it despite the nerf. We also have Mankrik to fill our deck with free 3/7 minions, and (as promised) Kazakus, Golem Shaper.

In a pinch we could even loop a Battlecry like Cult Neophyte, because everyone loves it when they can't play the game, or Nobleman to get extra copies of our Battlecry minions. We're also running Youthful Brewmaster to protect key minions.

Does this deck go too far in trying to break Bolner Hammerbeak? Yeah, but that's the point. Hopefully we've inspired you to build your own Bolner bonanzas, and find the busted synergies that we overlooked.

Closing Thoughts on Shaman and Stormwind

Shaman has a promising future ahead, and not just because it got a pair of Elementals that slot right into the existing Elemental decks. It got not one, but two Legendaries that make things repeat themselves, whether they be spells or Battlecry minions. Also Tiny Toys.

Our guess is that Elemental Shaman will continue to be in a good place in the meta, but also that there will be a lot of space for experimentation with Overload decks and Battlecry decks. Who knows, maybe even Tiny Toys will find a place in a real Evolve Shaman deck. That's the beauty of a new meta: you don't really know what will be good, but you head out anyway to explore the great unknown with hope in your heart and a song on your lips. Maybe we'll see you out there; we'll be the ones trying not to queue into Face Hunter.

Click on any of the banners below to be taking to our other class card reviews for United in Stormwind.

Hearthstone Shaman Opinion Out Of Cards Opinion United in Stormwind