Welcome! Can common decks be useful? How rare can a deck be? Do you have an epic solution? How about a legendary strategy?

This week we are looking at decks that contain cards of only one rarity. It's interesting in that, it seems the Common cards deck offers the most "balanced" play - by that I mean you're more likely to be evenly-ish matched with your opponent than with the rest.

We'll take a look at each deck and talk about what design traits each rarity has!

Priced at the measly cost of 1200, this deck has a variety of decent cards, all quite versatile in a plethora of situations.

Common cards seem to always do something on their own, which is partly why I think this deck succeeded more than the rest. The design philosophy for Common cards seems to have the following core concepts:

With this, it makes sense that a deck full of common cards will be more useful than one of Epic cards, which tend to rely on other cards to be useful more than not (but we will get to that later.)

As you can see from the deck, all the cards within it have huge value; more value than other common cards. This is a core aspect of the mage class, being the class with the highest amount of value per card. With so much power in its cheap cards, it's clear why it also happens to be the class used in the game's tutorial.

I had a lot of fun with this deck. It is highly versatile through its card-generating effects, allowing you to find higher-rarity cards easily, and thus giving you some more situational cards for when the going gets tough. Overall, I would probably recommend it most out of the decks on display today.

One rarity higher and the cost has been upped to 3000 dust, while the deck is also less effective. It's not a terrible deck; you can feel some cards are missing. With no common cards, the game feels a bit off; however, the potential power level of the deck is higher than the Common Mage!

This is where situational cards start showing up. Eater of Secrets, Mind Control Tech, Stampeding Kodo and Conjured Mirage are cards you tend to keep in your hand unless there is an opportunity to use their effect. Their effect tends to be stronger than common card effects; however they can be useless in certain situations. These cards tend to sit in your hand until the time is right for them to be played, which is a key difference compared to common cards, which are generally good to play at any moment. I would define the core concepts of rare cards as such:

Druid is also a value-driven class, but in this case, the value is choice. Each Choose One card is not super powerful, however, the fact that it includes two effects in one is where its effectiveness comes from. Being able to choose the better option is extremely valuable, and similar in design to the Discover mechanic (but more powerful in that you always know what you get.) Saviors of Uldum brought a new level of power to Choose One decks (which were previously only enhanced by Keeper Stelladris and Fandral Staghelm) with Untapped Potential, which grants the Druid Fandral's effect for the rest of the game.

There is synergy in this deck. Treants have a little corner to themselves; however, the other cards aren't as easy to consolidate into a single "synergy corner". I would like to highlight a synergy I did not expect - but which has proven extremely strong - in Quicksand Elemental and Scorp-o-matic. The number of times I removed a beefy minion from the board with these two cannot be counted. I would include them in some aggro decks if I had the chance. 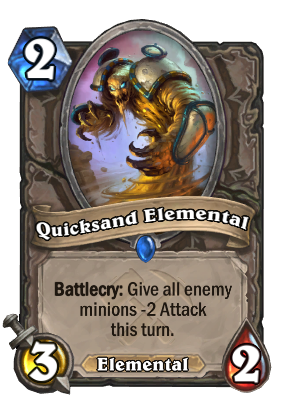 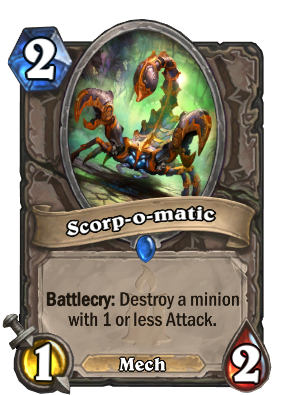 The rent has gone up, and this deck with it. At 12000 dust, you get even more situational cards, crazy tempo swings, and a lot of low-health panic!

Epic cards are weird. Some as simple as common cards and their effect is not too crazy (Vulpera Scoundrel), others are extremely specific and honestly weird (Mischief Maker).

This deck specializes in delaying the opponent. You have a lot of options, ranging from Dreadsteed to Doomsayer, however, I would like to highlight how good Mischief Maker is in this deck. For a card that could potentially give you opponent something extremely powerful, it shines in a deck as situational as this one. The impact of this card can stun your opponent's endgame or even dismantle it if you're lucky. Turns out, most cards in your deck, if played against you, will not too effective. Riftcleaver? He'll eat away at your opponent's health. Dark Bargain? He might discard something important. Skulking Geist? If he's got 1-cost spells in his deck, he won't even play it. Other cards such as Diseased Vulture and Deathweb Spider can also be entirely useless if your opponent is not a Warlock or a Mage.

This deck has the potential to become powerful out of being a meme. I am not sure if I will ever be able to create something as great as this.

What I've learned from this deck is that epic cards can feel extremely awkward to play. They tend to be even more situational than rare cards, to the point that something like Soulwarden is just a regular 6/6 if you discard cards are at the bottom of the deck. They are most effective when they have 1-2 cards to support them; on their own, they might end up covered in webs, in your hand until the end of the game.

Valued at a whopping 48000 dust, this is as expensive as a deck can get. This is also the type of deck where a certain panda thrives the most… 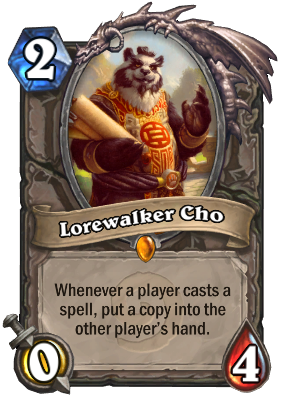 Lorewalker Cho is great. You only have one spell in this deck, Corrupt the Waters. If you manage to draw Cho and play him on turn 2, he will generally stall your opponent for at least two turns. This gives you enough time to build up some mana and start churning out legendaries, of which half cost over 7 mana.

Legendaries seem to be a mix between all other rarities in term of design. No matter what, they certainly have value. Some are more situational than others, but even if played randomly, they will usually earn their keep.

In this deck, we have our usual stars (Dr. Boom, Ragnaros the Firelord, Sylvanas Windrunner ans so on), setup cards (Stalagg, Feugen, Emperor Thaurissan), card generators (Barnes, Ysera, The Lich King, Nefarian, Hagatha the Witch) and a plethora of other legendaries whose effects are instant and palpable.

Getting a cheap legendary is crucial early-on. Barnes works very well in this deck, being able to potentially summon one of fourteen cards with great effects.

Baron Geddon can clear most unbuffed aggro boards and acts as a two-sided Consecration. Siamat can take care of a big minion or two, and Feugen or Stalagg will net you an additional Thaddius!

I have added Prince Malchezaar to this deck for a chance at getting some other powerful legendaries, from other classes. Make sure you're careful when summoning Prince Valanaar!

If your opponent does not kill you fast enough, you will begin to perform pretty well in the late game, and there might not be anything to stop you. They can only have so much removal, and almost every card in this deck is dangerous enough to warrant big plays to ensure it is off the board.

This week, I found that each card rarity comes with its own design plan. They have seemingly been designed so that you have a mix of everything in a deck, with common cards performing a bit better on their own - I assume so players with small collections can still make viable decks. As the card pool ever expands, there might come a day when a deck filled with cards of only one rarity will be competitively viable, however, even with the current amount of cards in the game - a whopping 2,150 - this is not currently the case.

Perhaps at 4,000 cards, it will work. However, there is one thing I am certain of: There will never be enough cards to make Angry Chicken viable.