We're back with a look into long-forgotten cards now only available in the wild format. We're going over the history and give insight into these cards and then build decks around them. Join us into the depths of the wild jungle to explore another four cards.

Want to read another chapter of "The Forgotten Wilds of Hearthstone" series, where we have a look at four long-forgotten Wild cards -one per rarity- that were missing the action for a long time? Even better, we will give you some insight into the history of these cards and help you build a deck around them. If you are with us, join us to explore the depths of Wild jungle to find out what these cards are about.

Seeing Everything From the Sidelines 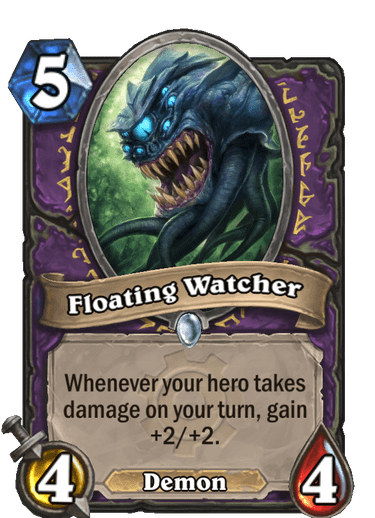 We're starting things off with Floating Watching, a Demon introduced all the back in Goblins vs Gnomes. Unfortunately for Warlocks, back in 2014 - 2016 when the card was available in Standard, there weren't enough activators like there are today to truly turn this card into a powerhouse, so it was left to the memes.

Instead of playing Zoo with a self-damaging package thanks to the narrow card pool, we instead went full Aggro with the mix of cards we had back then which gave us all the tempo we needed without the drawbacks of taking damage.

Thus, if you can close the game by charging ahead into face with summoning over-statted minions with minimal Mana spent, why spend 5 Mana to gain +2/+2? Also, one would prefer to pull Doomguard - following with Power Overwhelming - from Voidcaller rather than the slow Floating Watcher. This was also a time where Face Hunter was a popular archetype as the unnerfed form of Abusive Sergeant, Leper Gnome, Knife Juggler, and others would quickly and efficiently chip away your Health. So, you need to be very conservative about your Health as Warlock to prevent death, making Floating Watcher surely out of the question because you didn't want to hurt yourself on purpose, speeding up your demise.

Despite these drawbacks, it was possible to succeed with Floating Watcher as seen in gameplay from 2015.

Now, looking at the current meta, the pace is somewhat slower than what it was between 2014 and 2016. As a result, Zoo decks can use Floating Watcher now since it requires some buildup and there are plenty of cards in the self-damaging package that we can make use of. Here's a deck from SirHerpDerp which makes use of Neferset Thrasher, Kobold Librarian, Vulgar Homunculus, Riftcleaver, Spirit Bomb, and Bittertide Hydra as activators. To make things even better, we're going to try and get even more value out of these cards instead of only relying on Floating Watcher thanks to the inclusion of Diseased Vulture and Hooked Reaver.

Do you want more decks? If desired, feel free to do so here. 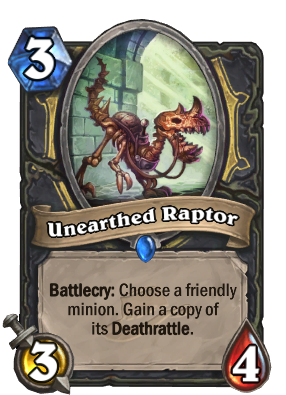 The League of Explorers unearthed this card in the expansion of their namesake, this skeletal raptor was a key card being utilized in the Deathrattle Rogue archetype. Akin to Shadowy Figure and Prince Taldaram, this card was welcomed well from Hearthstone community and became one of the more iconic cards in the game's history. Before this card was printed, you could imitate a cool Deathrattle minion only with Faceless Manipulator by spending 5 Mana, which was not an ideal way to copy Sylvanas Windrunner let's say. With Unearthed Raptor, however, you could copy her ability with 3 Mana, which is much more efficient.

If Unearthed Raptor was so good, why don't we see it being used anymore? Simply put, the archetype died when it became outclassed by others. In Wild right now, Odd Rogue featuring Pirates and Mechs is proving to be popular as is Tempo Rogue and Burgle Rogue. With that said, we can still have fun with this exhibit and Jurk39 has done just that, focusing on the Jade package.

Want to rattle with death? So, tag along with it here. 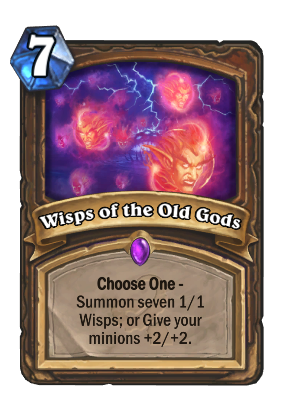 By the power of Old Gods, let's continue with Wisps of the Old Gods! The card never saw play either in competitive or the casual scene, but that's about to change as we uncover the Untapped Potential of this card.

Just like how Cenarius didn't see play until the printing of this Quest, Wisps of the Old Gods didn't see play, either. The main reason was not because of their high cost but because these cards are only worth it when their Choose One effects are combined. Previously we saw Fandral Staghelm which would allow us to get value out of these two cards, but it was not reliable since he could easily die before your next turn when you could drop your powerhouse - the combo of which exceeded 10 Mana.

In addition, it's worth noting that high cost of Wisps of the Old Gods fits perfectly with Big Spell archetypes, namely King Phaoris decks. Down below, I've combined the Big Spell package with Highlander and the new Druid Quest as the final touch.

It looks like the community is tinkering around with this card. You can check more right there. 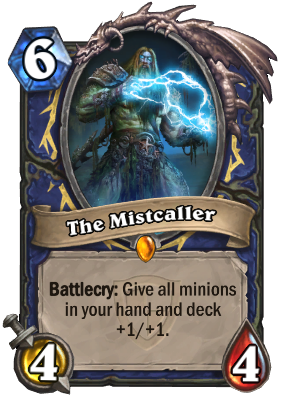 The Mistcaller was a unique card that could push Handbuff Shaman as an archetype but was unfortunately printed at the wrong time, all the way back in The Grand Tournament. It as a simpler time where everyone simply went face and it just wasn't smart to lose so much tempo by playing The Mistcaller on turn 6 when instead you had to be defensive or push your own final blows.

After cards like Prince Keleseth, Arena Fanatic and Anubisath Warbringer were printed though, I thought I would saw Handbuff Shaman quite often as an archetype when combined with Shudderwock and Da Undatakah, but that dream never came true. Still though, after seeing Watermelon86 experimenting with our misty friend, I was glad to see it and knew we had to shine the spotlight on it.

More decks are welcomed him in a place here.

That's all for today. Let us know in the comments which cards you feel don't get the time of day anymore and you may see them in an upcoming spotlight. Until next time, peace out and stay tuned for future Wild coverage!