Just a couple days ago we received the second balance patch of the United in Stormwind expansion cycle, but it appears that it's not over yet. As Hearthstone Developer Alec Dawson stated on August 25th, during the upcoming days Team 5 will take some time to evaluate the new meta and decide whether additional changes are needed or not.

There are two things about the tweet you can see below that strikes us the most.

The first one is that, after a rather long time, Team 5 is considering doing a round of buffs! Particularly appreciated by the community, buffs are an exceptional way to tweak cards that are performing below the original expectations and to give more value to the players' already existing collections. The last time we were blessed with some buffs was Patch 20.2.2 (May 12th), which brought us changes to N'Zoth, God of the Deep, Shieldmaiden, and Lilypad Lurker - just to name a few - pretty impactful we'd say!

Previous changes [the ones to Stealer of Souls and Flesh Giant] were an addendum on initial round (short window, no loc). Next full patch [which will go live in late September] was created specifically for balance changes. Talking about many things (nerfs + buffs).

If you're able to disclose this, what are your reasonings for not wanting to touch Wild atm versus your reasoning for adjusting it? Is the team unsure what the best approach is currently, so there needs to be more time to find out?

Video games take an incredible amount of planning and coordination. Team has more on their plate than ever before, change in those plans causes significant disruption. Try to not disrupt unless there are even more extreme things happening (crashes, tiller). (Source)

The second, and possibly the most relevant to some, statement is that Team 5 has acknowledged that the Wild format has reached a saturation point and changes need to be made.

This tweet comes after two very intense days, during which multiple Wild content creators spoke up against the recent balance patch, complaining about the presumed lack of attention towards their format, which is currently warped around the Warlock class and, in particular, The Demon Seed shenanigans. 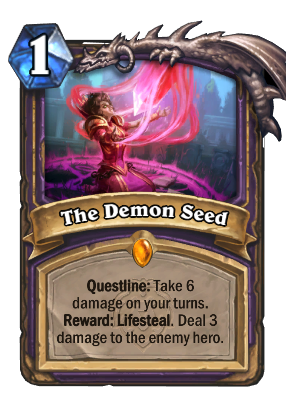 While we don't know what cards are going to be hit, we are fairly confident that Questline Warlock should be toned down a little. If we were you, we'd try to finish that achievement as soon as possible!

What cards do you think Team 5 should look at for potential nerfs and buffs? Let us know in the comments below!