Whether you are bristling with excitement in anticipation of Hearthstone's newest game mode or defying the hype as well as one possibly could, it's a fairly safe prediction that the next couple of weeks should belong primarily to the long awaited Mercenaries. Even if it's not going to turn out to be everyone's cup of tea, most players should at least spend some time trying to determine this for themselves.

But, we're not there just yet. With still a few days to go, it might just be a good idea to get the bulk of laddering towards your desirable final rank out of the way (and deal with that pesky weekly Ranked quest early on). To help us achieve these goals, HSReplay.net has recently shared a few suggestions based on their data: 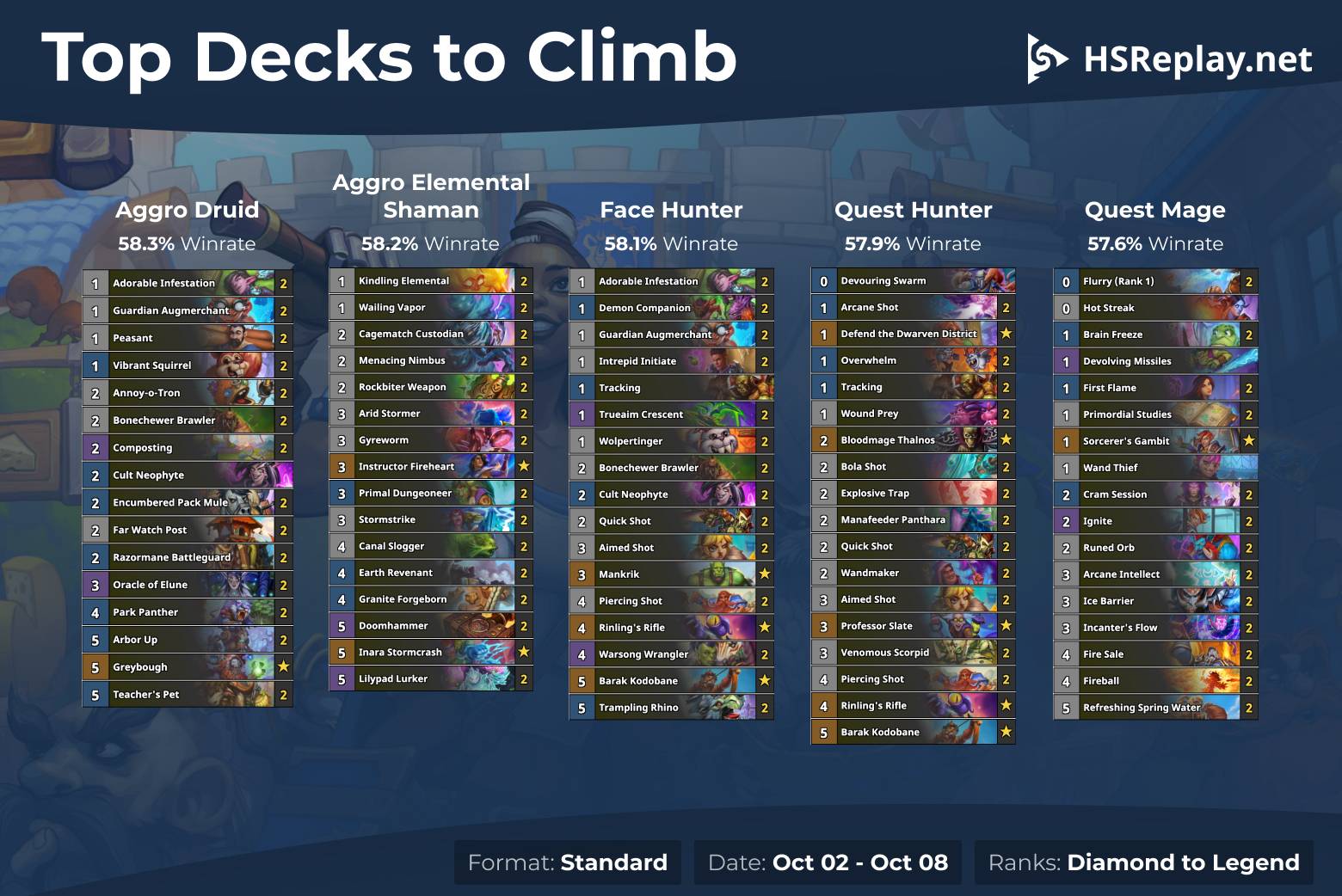 As you can see above, this particular snapshot encompasses most of early October and the Diamond/Legend ranks for Standard Ladder as a whole. Let's have a closer look at the five decks earning the spotlight:

Staying strong, as Peasant overlords keep proving how they deserved our respect all along. It's a deck that lives and dies by maintaining a notable board presence. That odd Cult Neophyte can be quite crucial for locking out an important turn on the opposing side.

Another familiar sight that tends to move in and out of the metagame. When raw elemental power isn't enough, add in a Doomhammer or two. Earth Revenant found its way back into the deck to help survive slightly longer when faced with a lot of small minions. It's pretty good at delaying a larger threat by a turn, too.

Same old, same old. Well, almost. The deck still refuses to bow out even as its power level looks pretty stabilized. Double Trueaim Crescent at the cost of one copy of Tracking is more of a small novelty, ensuring you might find at least one to aggresively fight for that board dominance. Plus that extra Trampling Rhino punch.

Now here is one deck that has been seeing some love in the recent weeks, and it doesn't feel nearly as stale as the rest of them. Never dusted off your Professor Slate? Time to spread some poison (but it's not that essential, I wouldn't recommend crafting just for the sake of playing this)!

Double Explosive Trap might be considered an overkill, especially if you are seeing a lot of Mages or fellow Questline Hunters. But it can be handy against these other, more board based decks.

We have seen people experimenting with a number of cards in this deck, so it's not necessarily its final form (which might keep shifting depending on what's most popular). Devouring Swarm has an interesting application here, yet we shouldn't entirely count out Lock and Load for its random refill potential. Some players prefer to include Resizing Pouch for the overall versatility, and there have even been sightings of a single slot reserved for Imported Tarantula (which is a bit of an odd one, admittedly).

All in all, that's the largest breath of fresh air we get compared to the rest of the field in question here.

To some, this very deck encapsulates everything that's been wrong with the Stormwind metagame to date, or perhaps even with some of the Questlines in general. You are always on the clock when going against it, as the life expectancy becomes very short once Arcanist Dawngrasp comes down. And it often doesn't take particularly long for that to happen.

The infinitely scaling Ignite cannot be reasonably outlasted while Mage enjoys strong card draw engines (along with decent stall/removal options). Even when it's not the strongest, it's no surprise the deck more or less directly influences just what kind of strategies are viable in this meta (just like The Demon Seed has done before the nerfs and for Wild format as a whole). Now and then, I do sorely miss Mage decks that actually played minions. But yes, moving on...

Here we have a copy of Devolving Missiles instead of one Wand Thief; which is worse in the mirror but especially useful against the likes of Aggro Druid.

Does any of this closely reflect Standard Ladder experiences at your respective ranks, or do you believe something important is missing (hint hint, Raid the Docks)? If not picking any of these top contenders, what else would you choose to perhaps counter each and every one of them? Give us your wise insights below!