Pasca of NoProsHere organized a Mercenaries tournament yesterday, taking the world first for Hearthstone Mercenaries tournament. The invitees has some players that have been theorycrafting Mercenaries since the original data leaks that showcased everyone's abilities and equipment, so this was certainly going to be a treat when compared to players who didn't give it much thought.

Read on for the winning lineup and a round of questions I had with Pasca, the tournament's organizer, and the winner, Leaf.

Leaf won the event with their "Non-Binary Finery" team which was composed of:

Here are all the party lineups that were played during the tournament. 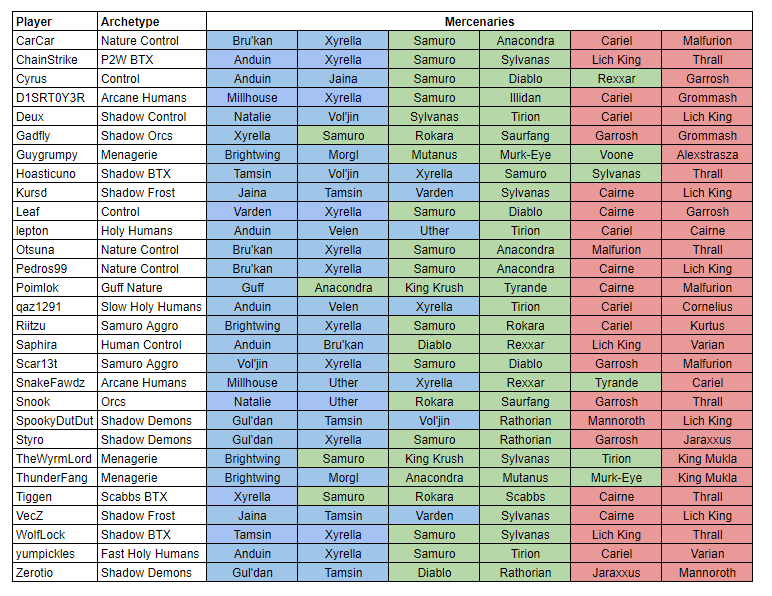 You can view the full results on Battlefy. We've provided a table down below with the end results.

I had a chance to speak with Pasca, the organizer, about Mercenaries and the event.

What drove you to run an event so early on into the release of Mercenaries?

I love tournaments. I think that more people would play in them if they realized how fun they can be even when you're not trying to go pro. I especially love tournaments when there's a new thing that just came out, because it allows players to come show off their early ideas and test which ones work. It's often the first tournament in a new meta (or game mode) that provides initial data and sets the outline of the archetypes. In this regard I think that the event was a great success. The participants were players who grinded from the start to max out a team of Mercenaries in the 30 hour span from release to event. The most successful were the ones who begun testing, theorycrafting and simulation as soon as Out of Cards published datamined mercs abilities. They are not players we saw before in Hearthstone tournaments, they come from similar genre games. It's fun to see that we're about to have a whole new generation of competitors.

Are there any Mercenaries you were surprised to not see played during the event?

The potential of Fire seems largely unexplored. I'm looking forward for more Antonidas, Baron Geddon and Ragnaros in the future.

If Blizzard were to put out any balance changes for the mode, who do you think might get targeted?

It's way too early to tell. In fact we have seen early signs of a healthy rock-paper-scissors type of meta when two players running Nature Control met in the winners final, but were then defeated by Leaf who came all the way back from the losers bracket. Leaf's greedy comp admittedly loses to aggro openings but was made to counter control, which she was rightfully expecting to face.

What would you like to see in the future for Mercenaries Esports?

We already know that there is a major tournament planned in China. I hope to see a lot of events organized both by Blizzard and by grassroots organizations. Tournaments but also leagues, why not. I know that the demand exists because when I announced this one, players from Europe and Asia expressed the wish for an equivalent on their server. We had 30 high level competitors with zero prize money, and professional level casters volunteering to work on the stream. The hype is real.

Grassroots events are something we haven't seen much of for Hearthstone in the last few years, at least nothing like before Blizzard largely took control of Esports - do you believe the Hearthstone Esports scene as a whole has suffered due to Blizzard running the whole show?

The thing that really hurt third party organizations is when they moved Masters Qualifiers to all weekends. It's hard to have players on the weekend because they're playing the official thing, and it's hard to have viewers on weekdays. It killed the most visible events like Dreamhack, but the small organizations that run Wednesday night amateur tournaments for fun, the equivalent of your neighbourhood recreational sports, still exist. There's a vivid scene, particularly in Latin America and Europe, of people who form groups to play for fun and demonstrate incredible passion. Join your local league today!

Do you have any future plans for more Mercenaries competitive events?

I might run other ones in the future but not on a regular basis. However I have heard of other organizations with plans to host tournaments. When they do, you will hear about it on my twitter and in the NPH Discord.

Where can everyone find you?

I had a chance to also speak with Leaf, the winner of the tournament.

With Mercenaries being so new, how did you settle on your party composition?

Diablo's Fire Stomp 5 was working well for me in PvE, so I had to try it out in the tournament. Cairne Bloodhoof and Varden Dawngrasp I picked to set up the Fire Stomp combo, and the rest of the Mercenaries I chose because they have good survivability and damage mitigation. My strategy was generally to do a lot of damage with Diablo, and then outlast my opponent with my remaining Mercenaries.

Which Mercenaries did you have the toughest time against?

I had the toughest time against Malfurion Stormrage, Blademaster Samuro, and the combination of Lich King and Anduin Wrynn. CarCar's Malfurion opener in the finals was so powerful that my only chance was to win a 50/50 speed tie between Cairne's Endurance Aura 5 and two of CarCar's nature spells on turn 2. I got lucky in all of those coin flips and managed to scrape out the wins in the finals.

I know we're still only a couple of days into the release, but are there any improvements you'd like to see with Mercenaries?

I would like to see improvements to tasks and the task board. It is a little confusing and tedious to progress with the mercenaries I'd like to use. I think it would be nice if the next task for a mercenary became available immediately after completing the previous task.

What would you like to see in the future for Mercenaries Esports?

More tournaments! I think best-of-3 is a great format for this game mode, and I look forward to future tournaments.

Where can everyone find you?

Shout out to NoProsHere Pasca for organizing the tournament, Mullahoo and Dragonrider for their amazing casting and the producers for making it all work behind the scenes. You can follow me at @Leafygreens91 on Twitter where I'll post my mercenaries teams.