It's once again time to spread the word of appreciation for everyone's favourite speedy Bronze Dragon - Nozdormu! That's right! Nozdormu Day has arrived and with it comes a special daily quest to complete that requires putting Nozdormu the Eternal in your deck. 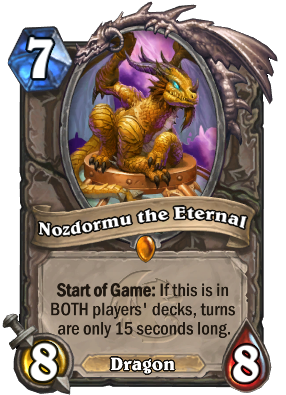 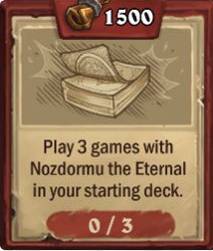 Could You Hurry It Up, Please

If you wish to take part in Nozdormu Day, you're in luck because all players can do so for free (the card is part of the Core set):

We're recommending that you play decks that aren't reliant on long combos or multiple actions in general. Using minions with basic effects or casting simple spells will do you wonders with maximizing your 15-second turn time. Though, the better you are at adapting to the short periods of thinking, the more mileage you could get out of more 'complicated' decks. But there is still no getting around actual animation times.

You may want to pick the Casual mode to not only prevent any potential Ranked losses, but to also increase your chances of finding an opponent with Nozdormu the Eternal on the other side of the mirror. It's no fun without a suitable swift partner! Or you could join our cast of the brave and the reckless and keep trying your luck on the actual Standard or Wild ladder. Time efficiency and two birds with one stone - Noz would be proud.

Why is the 15th of Each Month Nozdormu Day?

The 15th of each month is Nozdormu Day because it is a reference to the 15 seconds that each player has to take their turn when Nozdormu is present in both decks.

It comes with the official PlayHearthstone blessing.

We've put together a few Standard decks that may be handy if you are trying to complete the quest while actually attempting to get ahead on ladder or elsewhere. But our dear Nozdormu the Eternal remains very flexible and will fit anywhere you want it to!

We've had this special Nozdormu quest for bonus XP for a couple of months now. Do you keep taking part in either Casual or Ranked every 15th day of the month? Have any deck that is most suitable to be graced by Nozdormu the Eternal? Let us know in the comments which decks you'll be playing and how your luck has been finding an opponent.