In addition to kicking off the Hallow's End celebrations and bringing even more bundles to the game shop, the Hearthstone team has been continuously working (and likely not sleeping a whole lot) to prepare even more crucial hotfixes for various pesky issues that have become known over the past week.

We have known for a while now that a patch was coming and expected to release "early-mid this week" (thanks to communications from the likes of Tian Ding and Senior Game Designer Paul "Kaizor" Nguyen over on the Mercenaries subreddit's Discord server), and now the official word is out:

Patch 21.4.3 is starting to roll out now, so should be on all devices by the end of the day.

We also have a list of all the things we can expect to work properly now (again or for the first time):

We are in the process of deploying a hotfix patch (patch 21.4.3) that includes the following updates:

Some of the notes above might warrant a small explanation, in case you haven't been up to date with what was going on:

Somewhat "shockingly", not everyone has chosen to exclusively focus on the huge new flashy thing that was the arrival of the Mercenaries mode, with a faithful group of players still sticking to their tried-and-true Ranked climbing. And it didn't take long for some of them to start noticing that something didn't feel quite right when it came to their rating gains at Legend. It's tough enough to grind ranks up there even under the best of circumstances, let alone when your victories don't grant you nearly as much as they should. Numerous reports followed, the developers took notice.

As a result of all of this, there will be some consequences that might affect most indviduals who have tried to play and climb through the Legend ranks for the past week:

Dev is telling me “yes,” players should expect this to correction to result in some adjustments. (Since ladder is relative, I expect that whether you adjust up or down depends on the player).

Ranks are getting fix reactively, as well as affecting future games.

The leaderboard will update with that once this rolls out.

While this is mainly something that concerns a relative minority of players (~several thousand per region at this point in the month, with some climbing on 2 or even 3 servers simultaneously) - if you are currently one of the Legend rank holders, don't be surprised to find out that your rating is suddenly different to what you have left it at. For better or for worse.

If you've been grinding a lot of PvE encounters in the new mode and dilligently hunting tasks for your Mercenaries (courtesy of one Mysterious Stranger), you might've run into peculiar issues while trying to complete some of the goals being asked of you. Not everything turned out to be just a case of misleading text with wrong ability names being listed, or having odd workarounds (like Cairne's Task, actually): the likes of Antonidas and Mukla were genuinely blocking people's progress and forcing them to abandon and move on in search of something else. Definitely not what anyone wanted to see as part of their daily task reset. 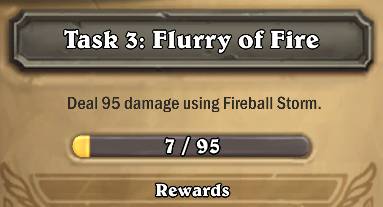 Should be all good now. (Source)

Do note that we've also had reports of several other tasks not progressing quite as intended, and that this round of hotfixes might not've managed to squash all of the related bugs just yet. Just in case, be on the lookout for such:

Scabbs #14 is also not able to be completed. Sylvanas #17 has a weird workaround which requires Tamsin to be used. Mutanus #9 has weird behavior and Voone#14 progress doesn’t trigger upon rush attacks and requires a 2nd turn to manually attack with dragons

Thanks for the report. I’ll pass these along to the team to be fixed in a future update.

We don't have an extensive list of all possible weird or broken interactions, but there've been many various reports of the kind. If you find yourself stumped by any particular task, we recommend asking in the relevant Discords and forums/comment sections (including our own!) - chances are somebody might know a way. And if nothing seems to help, make sure to add your post in the official thread as listed above, or file a separate bug report. As you can see, it's all being closely monitored and worked on.

Lastly, we were also treated to the following lovely update by Paul "Kaizor" Nguyen:

Hey all, just wanted to take a short moment to thank everyone for the bug reports and to give a little update on what to expect next!

There's still a few more task bugs that didn't make it this patch, but will hopefully be fixed in the next major patch. Will be moving forward with expanding/loosening the matchmaking and seeing how that goes this week. Hopefully we can fix the rematch bug as well.

Other fixes/QOL we're going to address in the near future is:

(To set expectations a bit - this won't make it some of the next patches as those are already in the pipeline. So if you see other things in there… just know that they were already planned way in advance!

So we've got some handy Quality-of-Life changes and even bigger stuff to look forward to!

Many of us like to jump into Casual Mode when trying to complete Daily Quests quickly and efficiently in a stress-free environment, so this option suddenly not being possible (even though it still seemed to work now and then for some people, if reports were to be believed) had some players initially worried that it might've been disabled on purpose. Luckily, nothing of the sort. Things should be back to normal by now, and people like myself can embrace AFK completions of "play 3 games as X class" in there once again. Ahh, missed it already.

We've also been informed of an upcoming resolution for a certain early and temporary (yet with lasting effects) Battlegrounds-related problem. The following message pretty much explains everything there is to it:

Last week’s patch introduced a bug that unintentionally caused people who played Battlegrounds immediately after the patch to have their rating reset. We quickly squashed that bug so that no more players would have their ratings reset in this way, and, at the same time reset the affected players’ rating to what it was just before 21.4.

Unfortunately, this introduced another bug that caused them to gain more rating than intended for each game following the initial fix.

Tomorrow, we will be implementing a fix that will stop players from gaining this unintended bonus rating. For the top 10% of players who benefitted from this bug, we will also be reducing their ratings to adjust for those unintended extra gains.

We will update this post once that change has gone live.

21.4.3 is a server-side patch so no downloads will be required. It is now live everywhere so good luck with rolling only the right Mercenary Tasks!