Now let's see what we can expect from the Shaman, Warlock, Warrior and Neutral cards that the Deadmines will bring to the game. Have a good read! 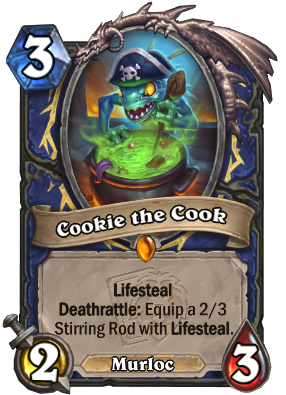 Finally, after Forged in the Barrens, Shaman receives another Murloc; however, it's quite the unique one. While there's nothing to say about Cookie the Cook's flavor (a cooking Murloc that hands you its Cookie's Stirring Rod once it dies), we think its uses will be quite interesting to figure out.

One thing's sure: Cookie the Cook represents an excellent way to survive the early game aggression that some opponents may want to dictate - both Cookie and its Rod have Lifesteal, which means that you'll be able to restore a bunch of life and remove some threats along the way.

We think that Murloc Shaman may still be missing too much for it to be competitive, we can see Cookie the Cook being included in other archetypes just because of it being generally good and being able to compensate some weaknesses certain lists could have. Maybe Control Shaman will return?

Finally, you can always play Suckerhook on curve and transform the Rod into a 4 mana weapon, but that doesn't seem a healthy interaction you want to build your deck around. 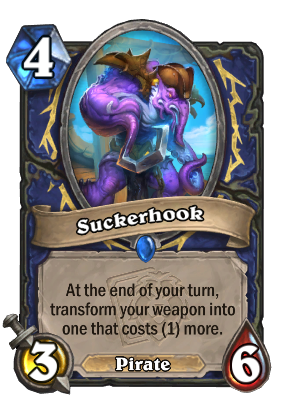 I mean, you usually include your weapons in your deck because you want to use them, and not because you want to get rid of them. Imagine trading away your Whack-A-Gnoll Hammer or (even worse!) your Doomhammer you built your deck around for a random weapon that costs 1 more mana and that may not be terrible, but may also not be better than the one you currently have.

To be honest, Suckerhook seems like the unit you get off an Evolve effect or a generation effect (for example Netherwind Portal) that irremediably screws either you or your opponent. 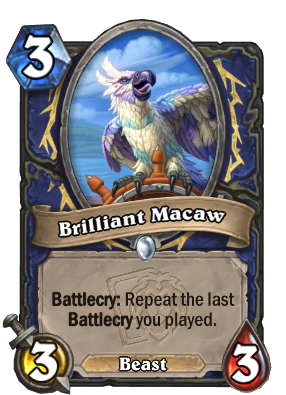 Being Battlecry part of Shaman's core identity, we think that there's no way that Brilliant Macaw will ever be bad. It may not see play if the class as a whole will struggle, but as long as there will be some impactful Battlecries, this unit will be there with them.

While we think it's reasonable to assume that effects like Gyreworm and Fire Elemental's ones will target random a random character, there are some other Battlecries that are far more reliable and far more worthy to replicate.

Primal Dungeoneer and Granite Forgeborn are probably the best ones you could trigger in Elemental Shaman, but let's not forget about Instructor Fireheart: getting two Discover chains in a row is going to be incredibly good, but also very fun!

One of the best cards in the mini set and definitely the best one for Shaman. 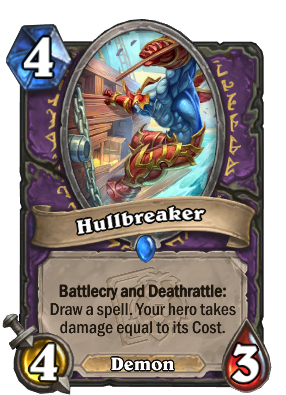 For the first time, Warlock gets a spell tutor. When we first saw this card, I and my fellow duelist Persia immediately thought about Deck of Chaos. Sure, enduring 5 damage on turn 4 and skipping your turn 5 may not be the ideal game plan, but you can try to mitigate the downside and pair Hullbreaker while a Shadowblade Slinger. It is also a Demon, and so it benefits from tribal synergies like Free Admission.

We think that, down the road, Warlock will benefit from having a specific tutor in its arsenal: chances are that there will be a time in which drawing certain spells will be very important for the class, and Hullbreaker will be there.

P.S.: Soul Fragments cost 0 mana, so if you're really desperate and want healing at all costs, drawing one off Hullbreaker will give you no self-damage and will restore 2 Health! 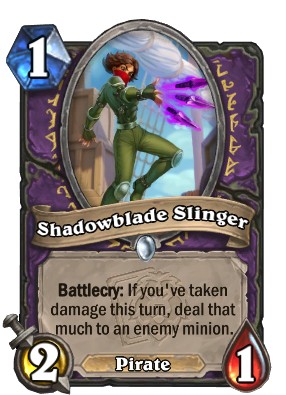 Prize Plunderer for Warlock, this unit represents another reward for inflicting self-damage as game plan. Cheap and flexible, you'll want to include two copies of Shadowblade Slinger in basically any Warlock deck that carries some self-damage (and remember: Gul'dan has Life Tap) like Raise Dead and possibly Unstable Shadow Blast.

We definitely see Shadowblade Slinger being played in Hand Warlock and pretty much in any The Demon Seed decks that will come to existence in the following months; it is possible that also Zoo will think about playing this unit, as the damage dealt by cards like Flame Imp and (again) Raise Dead will help you to control the board. 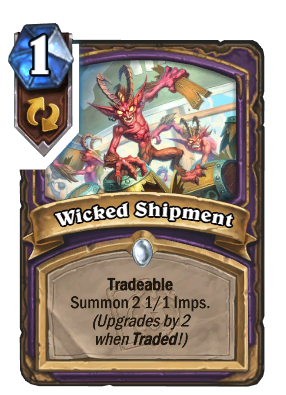 We've read about people disrespecting this card, and we're not okay with it. First of all, the bas for of Wicked Shipment is the Warlock equivalent of Lost in the Jungle for Paladin, one of the best cards printed for aggressive builds. Secondly, Gul'dan currently has a card called Shady Bartender, which was exactly waiting for something like Wicked Shipment to buff up. Moreover, if for some reason you don't want to play it, you just have to Trade it for it to come back with two more Imps to summon and buff. The card is good.

Now, this spell probably won't be enough for Zoo Warlock to come back into the meta, as we think there's still quite the power gap between this archetype and there other contenders, but we're getting there.

P.S.: Not calling this card Wicked ShIMPment was such a big miss from Team 5 - shame! 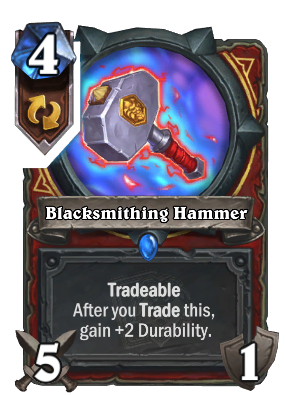 The Magma Rager of weapons, but fortunately for us it becomes better and better as the game goes to the distance. Trading Blacksmithing Hammer a single time gives you a 4 mana 5/3 weapon: a strictly better Arcanite Reaper! Warrior currently has Corsair Cache in its Standard pool, so fishing it back once you trade it should be easier than normal.

Overall a solid weapon, which however needs some setup in order to become worth it: for this reason, we're not sure Blacksmithing Hammer will be able to steal Outrider's Axe's place in Pirate Warrior. 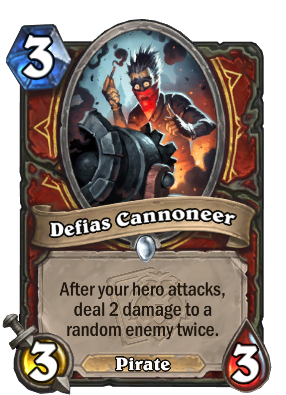 Given the recent buffs to Bloodsail Deckhand, Stormwind Freebooter and Stonemaul Anchorman, we did not expect Pirate Warrior to get any direct support in this mini-set. However, it appears we were terribly mistaken, as Defias Cannoneer is a wonderful inclusion to an already strong archetype.

Being Pirates a rather aggressive tribe that likes getting on board rather quickly, you can reasonably set Defias Cannoneer to clear the board or just hit your opponent in the face (because it can also hit heroes), thus creating an even larger gap for them to fill if they want to come back and win the game.

Particularly good off The Juggernaut, we expect this to make the cut not just in Pirate Warrior, but even in the unicorn Weapon Warrior we've been talking about for quite a while. 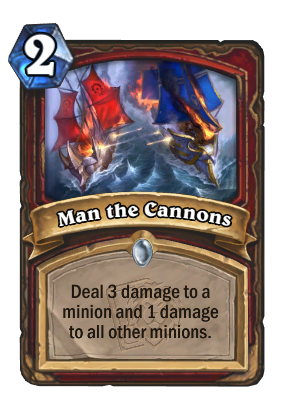 This is a 2 mana Swipe, and it's so good. You don't have to think that hitting the entire board (and not just the enemy minions) with a Whirlwind-like effect is a bad thing, especially because Warrior has plenty of way to gain advantage from friendly minions getting damaged: Armorsmith and Frothing Berserker are good example, but let's not forget about Kresh, Lord of Turtling and other Stonemaul Anchorman

Moreover, if you slot this in a Control-oriented list, Man the Cannons will pair up well with Lord Barov for a full clear and will act as a nutty removal against early threats, just like Minefield does but arguably better. It is by every mean one of the best cards in this mini set. 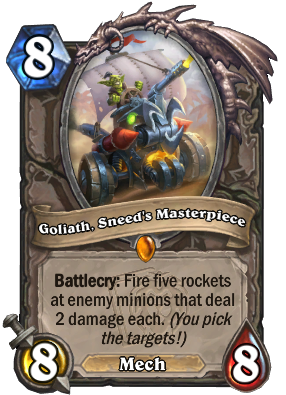 Finally, after a few months of waiting, the multi-target tech introduced in Battlegrounds with Vol'jin's Spirit Swap has arrived in Constructed as well.

For the card itself, 8 mana is a lot, especially in a format where a nutty unit like Varian, King of Stormwind struggles to see play, but we cannot deny that the payoff it quite remarkable: being able to shoot the equivalent of 5 Arcane Shots to enemy minions while developing an 8/8 body means high chances to clear the board and develop a threat for your opponent to deal with.

Being a Mech, Goliath (not the dwarf: the mech) will also be Discoverable by Deeprun Engineer (which will also discount it to 7 mana) and drawn by Ringmaster Whatley. 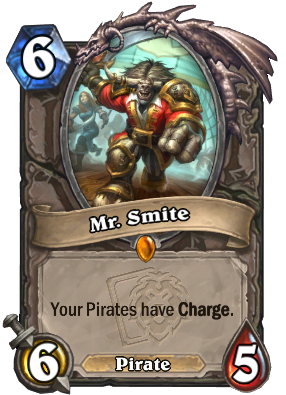 Guys, seriously. What is this card? We were aware that Pirates would've received major attention in this mini set, but to think that Team 5 would've pushed themselves to print this unit.

We're basically talking about Tundra Rhino for Pirates, with the only difference that it costs 1 more, has the same attack of Leeroy Jenkins and there's currently a ton of Pirate synergy in the format. Want some examples?

We wouldn't be surprised to see this card getting touched in the first few weeks after the mini set drops.

Also, we're interested to see if this card will be enough to justify running Pirates in classes different than Warrior. Probably not, but one can dream. 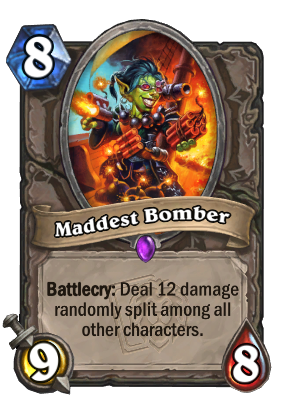 We could write you a couple paragraph trying to say that, despite being a total meme, it could have some very fringe application... but instead we'll leave you with a nice quality meme. 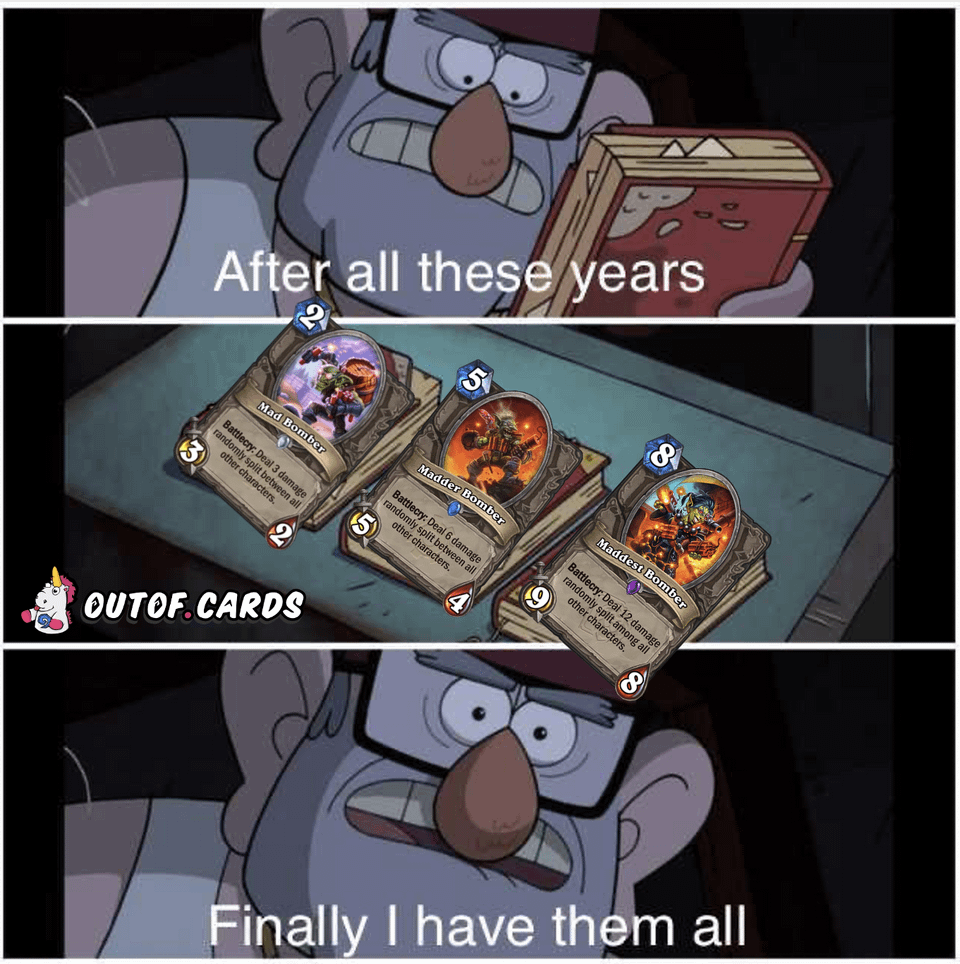 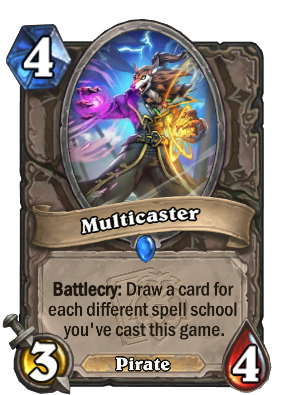 In order for Multicaster to be at least decent, you'd have to include it in a deck with 2 or more different Spell Schools. This way, you'd basically have an Arcane Intellect on a stick, but mixing Spell Schools together is not always that easy.

Just to name a few, there's Priest with Shadow and Holy, or Demon Hunter/Warlock with Shadow and Fel, but other than that... not much else. Mage does run three different Schools with Sorcerer's Gambit, but card draw is the last thing Jaina needs, especially when it interferes with Refreshing Spring Water.

We're not very hot on this one, but we may be forced to retract our statement. 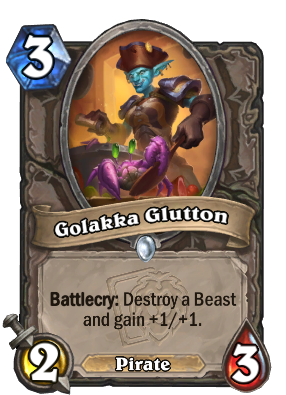 Just like many others, Golakka Glutton is a hard tech card, which means that it won't really see play unless Beasts will be all over the place in the next months, which currently doesn't seem to be a possible scenario. Right now the only Beasts you'd want to play Glutton to eat are Moonfang in Druid, Trampling Rhino in Hunter and Vibrant Squirrel/Encumbered Pack Mule in Druid, but even in this case you'll probably waste two slots in your deck most of the times. Unless you want to do some hate-deckbuilding, of course.

On a final note, Golakka Glutton easily wins the award for the most flavorful card of the mini set!