Hearthstone Scientist Tian Ding has been showing some Mercenaries PvP affection for the past few weeks, by sharing top winrate heroes and party compositions with us (as can be seen here and here). But it's been a while since we've seen anything official for the Constructed side of things. Well, what do you know, Tian has just decided it was the right time to send such a piece of relevant information our way.

We've got 5 of the Top 1% MMR Standard decks (as of today) represented below: 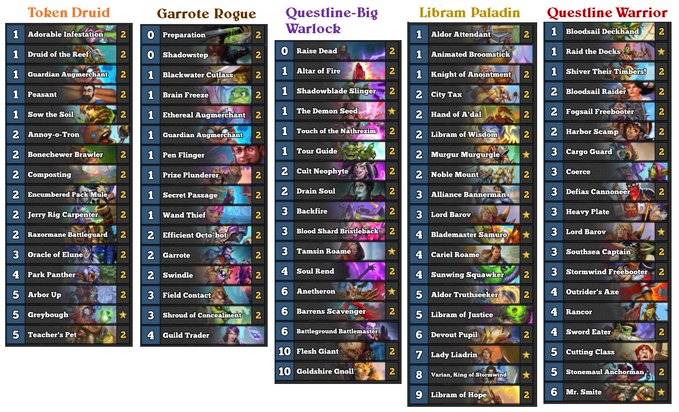 Without reading too much into it, let's note that the word "some" hints there should also be other viable picks in this top category. Of course anything without at least one card from the Deadmines Mini-Set wouldn't make the cut here. And while it's probably obvious for most people reading this, it never hurts to clarify that "MMR" here stands for "Match Making Rating" - that individual hidden value responsible for pairing you with players of similar skill level (or at least trying as best as it can). It's also what determines how many ranked stars you are given at the start of each season.

Moving on to the decks, these are all the usual suspects we know too well by this point; merely welcoming a new card or two into their ranks. The Druid list is actually the exact same as the one we've shared the other day, and the Warrior isn't much different - no great surprises here. We've collected all the deck codes below for easy reference, specifically noting the new inclusions. And if you'd like to find a wider selection of fresh takes to try on ladder, don't forget our recent look at the early Deadmines meta:

Druid of the Reef and Jerry Rig Carpenter feel very much at home here. On a side note, that latter card has been actually causing some ruckus in Wild and Duels, by splitting into 0 mana cost spells. Oh, Jerry.

Librams keep finding a way to resurface. Now with friendly parrots, you can put Sunwing Squawker on repeat.

It's not easy to fit anything new into this compact list, but how about more card cycle and discounts with Blackwater Cutlass? In case your Efficient Octo-bot and Field Contact were not enough.

The game plan remains the same. Shadowblade Slinger makes for a different form of removal than Unstable Shadow Blast, with a small body attached. On a good turn the numbers could be pretty big. No synergy with Tamsin Roame, but can come back to the hand through Raise Dead.

How does that correspond to your own ladder experiences? Anything powerful missing from the list? It's only been a few days and the Mini-Set has added relatively few cards, so we've never really expected to see tremendous meta shake-ups.