Welcome back to another issue of Fan Community Spotlight! In this installment, we're going to look at the Tactician class, created by Hordaki (rhymes with "Mordecai").

As a Tactician, your base hero is Taran Zhu (making this the first class showcased on FCS so far with an established WoW character as the base hero). Your Hero Power is Strengthen, which gives a minion +1/+1 when you use it. Upgraded, it turns into Extra Strength which buffs both your target and the minion directly to the right of that target (if there is one). 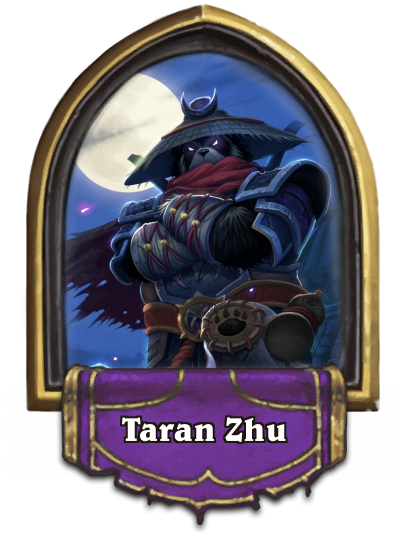 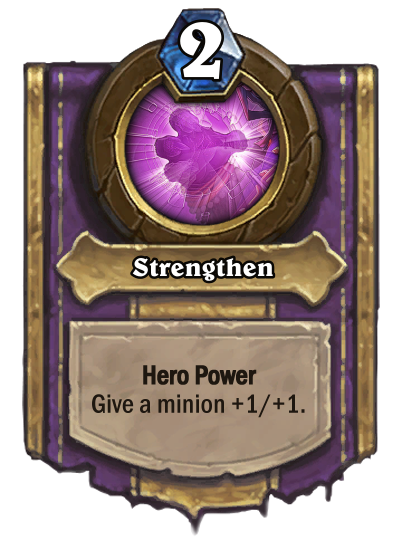 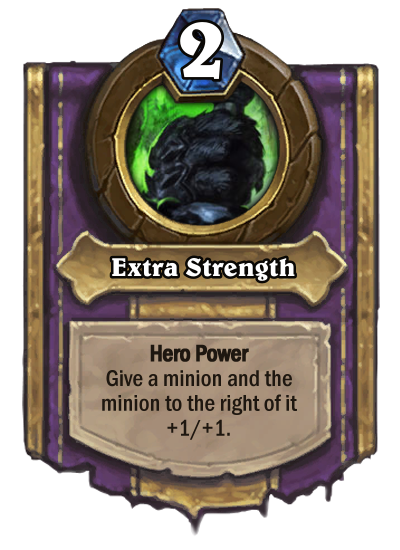 As with most custom classes, you also have a custom keyword to go along with it. The keyword for Tactician is... well, Tactic. Minions with Tactic grant bonuses to any minions who fit the described characteristic. Tactic effects work as an aura, but the effects they grant are permanent instead of temporary.

One other particularly noteworthy aspect of this custom class that you don't see in most others is PVE content to go along with it. This includes all of the card buckets and starting decks for the roguelike modes, Shrines for Rumble Run, the boss card played by The Lich King when you face him in the Icecrown Citadel adventure, and so on. All in all, there's a lot of effort put into here. It's worth checking out.

"The Tactician is a minion-focused class built around building and maintaining board presence. Most of the core mechanics for the Tactician were based on mechanics or ideas that Hearthstone has dabbled in but that I always thought should be explored more. Things like adjacency effects, rarity interactions, and non-Legendary build-around minions. Basically anything I thought would be interesting design found its way into the class, although I tried not to go too crazy. I wanted the cards to be believable.

The Tactician's main strength is in its ability to build a board. Send in the Troops, Huojin Taskmaster, and Through the Storm are options to summon minions quick (in this case Shado-Pan Agents, a Tactician-exclusive mechanic in the vein of Silver Hand Recruits. But 1/2 minions with no text aren't going to win any games by themselves. That's where Tactic minions come in. Shado-Pan Master, Jade Monk, and Hozen Blademaster (for example) all have Aura effects to give your minions that fit their specific Tactic an advantage, but unlike Aura effects, the buffs are permanent and stick around afterward. Plus you can chain them together for big combos: Shado-Pan Master can turn those Shado-Pan Agents into 3/3 Taunts, then Jade Monk will give Deathrattle to them since they have 3 Health and they can summon Jade Golems. Or if you have Hozen Blademaster, they'll become 3/6 Taunts Suddenly those 1/2s aren't looking too shabby. 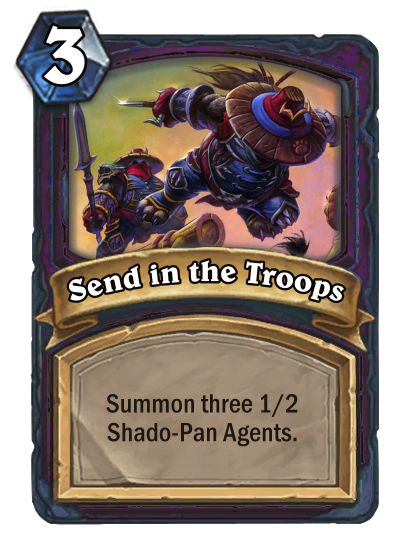 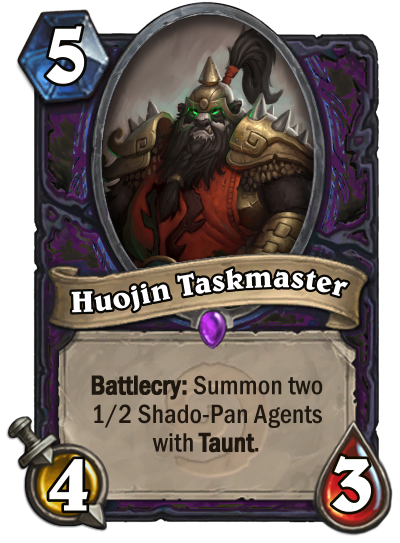 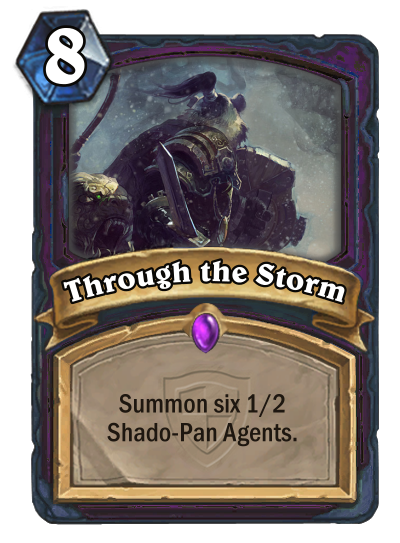 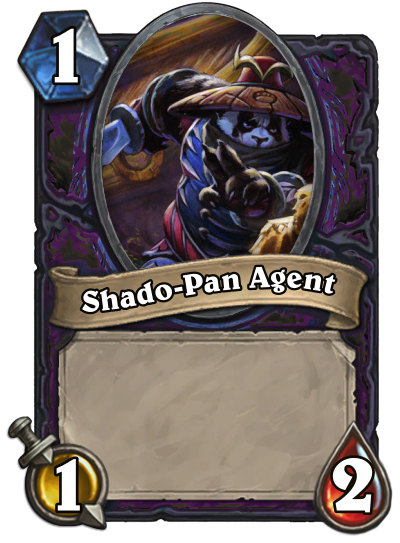 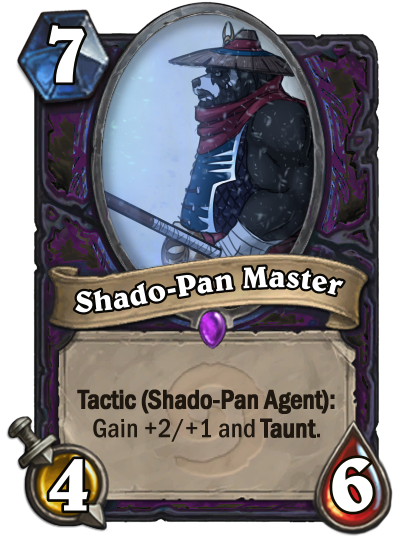 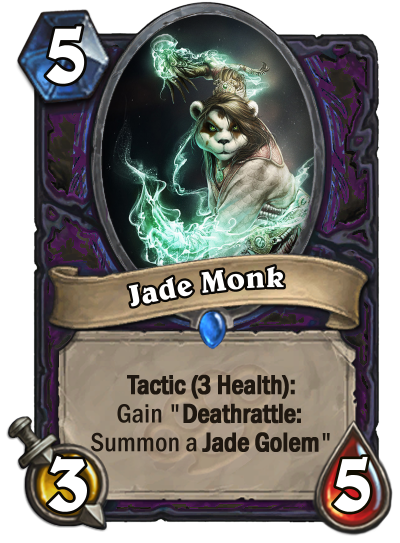 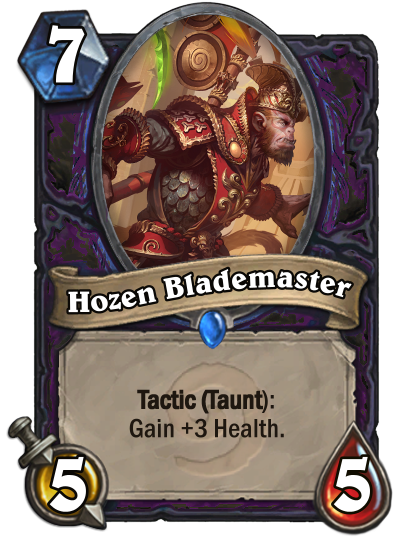 Tacticians make use of strategies that other classes generally ignore. I Guard, You Attack, Salvage Seeker, and Magical Maiden give adjacent minions buffs or other effects, but require you to be smart in your minion placement to reap the benefits. Rarity is another underserved mechanic that Tacticians take advantage of. Yu'lon, Pandaren Collector, and Saurok Commander give advantages when you play cards of specific rarities. 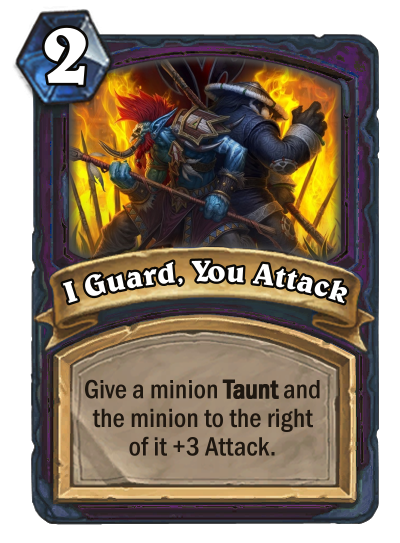 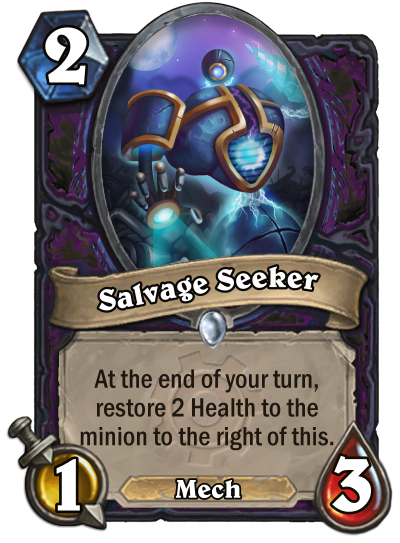 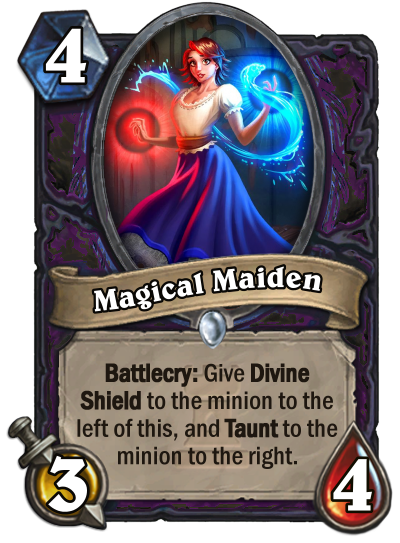 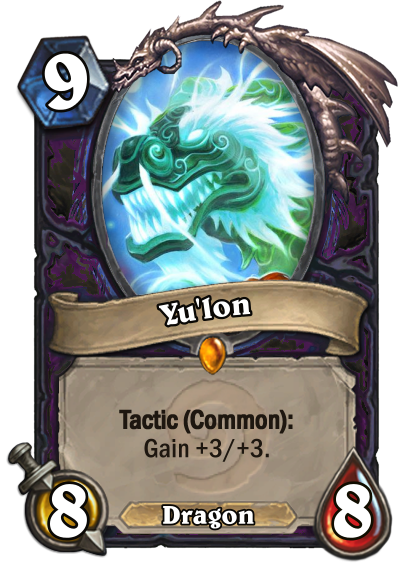 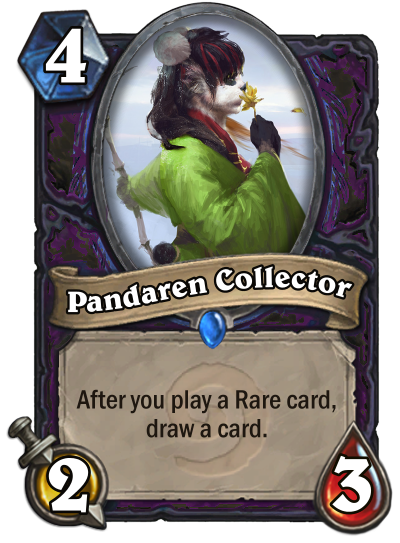 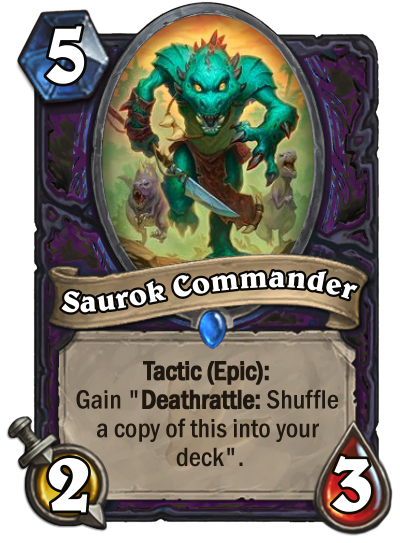 Tactician's also have access to minion healing and buff spells to help support your board. Natural Focus and Li Li Stormstout can restore your boards. Brews spells can like Stormwind Brew or Ancient Brew can give buffs to three of your minions, and act similar to Potions with specific minions that interact with them (like Chen Stormstout). Plus the class has plenty of card generating tools like Pandaren Jouster and Planning Ahead. 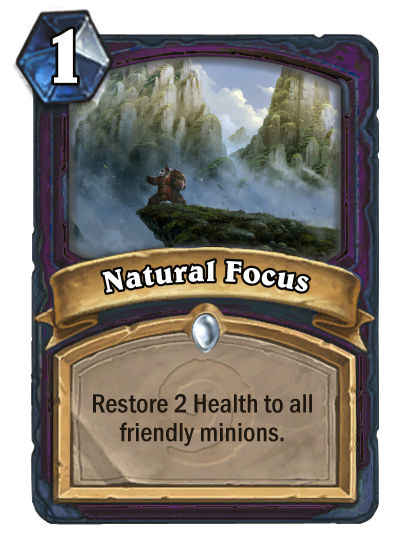 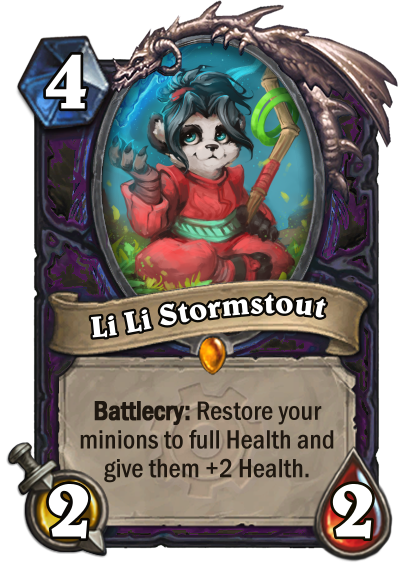 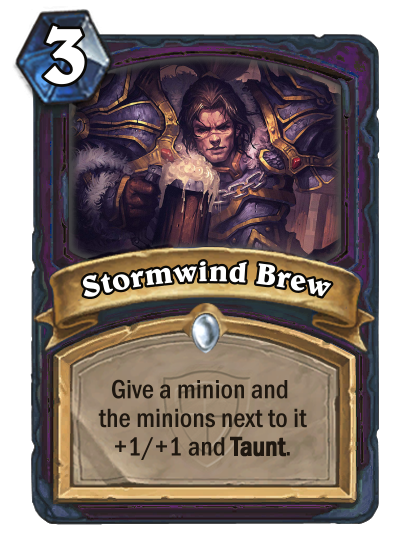 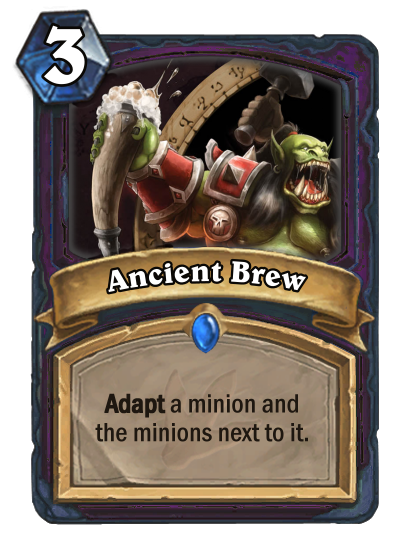 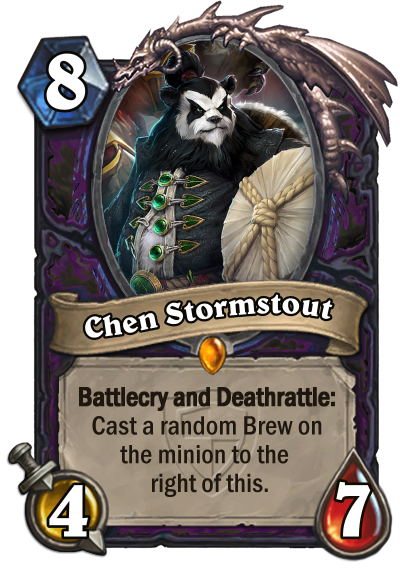 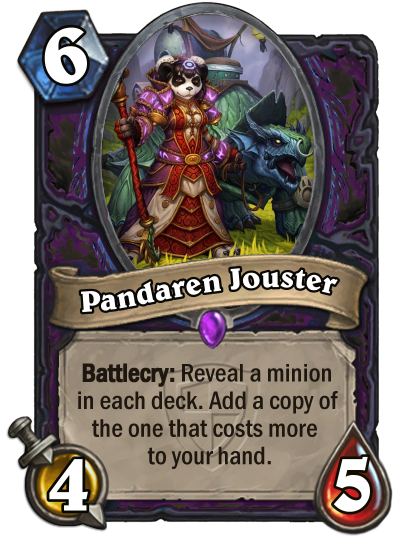 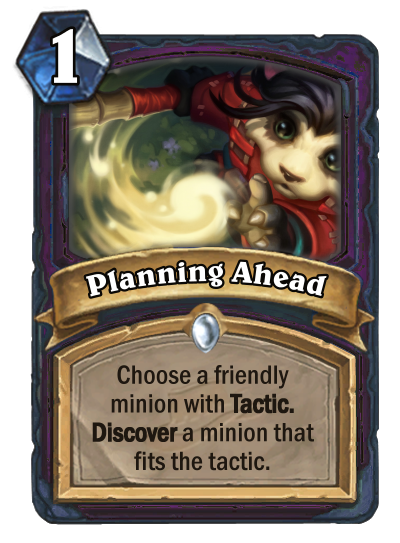 Tacticians do have several weakness though. They lack major board clear options besides single target spells or random damage, so they have to keep the board under control. They also have no spells for direct hero damage, so they have to keep the pressure up. And a well-placed board clear by the opponent can cripple them if they can't get a new board established in time. Tacticians have a lot of mechanics that require careful strategy and paying attention to factors ignored by other classes like rarity and specific stats, so they're not the friendliest class for newcomers to the game. But if you're smart with your deck, you can pull off a lot of cool things."

"Not much before this. Back on HearthPwn I followed the card design competition, but I only entered one or two. It was only after I made the jump to OoC that I started reading the custom cards forum and making some cards of my own for "Here's some art, make a card!" (which I'm gonna shamelessly plug). Once I got some experience with making cards and seeing some of the awesome stuff being made, I decided to dive in and make my own class."

What gave you the idea of the Tactic mechanic? Did that come first to create some groundwork for the class, or was it built to accentuate with what you already had?

"Hobgoblin. A friend of mine had a Warlock deck back in the day that used Hobgoblins and a bunch of 1 Attack minions, and while it wasn't competitive it wasn't that bad of a deck. When I was figuring out the class, I knew I wanted to include minions like that. Ones that while not overwhelmingly powerful, could be built around in the right circumstances. Tactics were based on me figuring out how to make cards like Hobgoblin viable. Well, what if applied to minions summoned instead of just played minions. And then what if it worked as a Battlecry and affected applicable minions already on the board? Now you don't have to wait for the Hobgoblin before you could start playing minions, and cards that summon additional minions can be worked into the strategy. Plus stacking Tactic minions together could lead to crazy combo potential. Since one of the main factors to Tacticians is strategy and planning, it made sense to me to include a lot of minions to plan around."

Interacting directly with card rarities is a rare thing (no pun intended) to work on. How did this come about?

"I've never understood why there aren't more cards that interact with rarities. Sure there are Legendary interactions and, but not for Common, Rare, or Epic. The only time Blizzard has used a card with rarity (as far as I can remember) is the Rare Spear from the Rafaam fight in LoE. Since a lot of the Tactician mechanics are based on things I want to see in the main game I knew that had to be included. The flavor of the mechanic is that Tacticians should be able to see value where others don't. Tactician players would have to pay attention to not only mana curves but rarity curves when building decks to take advantage of the mechanics."

"I don't have any secret unused cards or concepts to share, but I can say that making all 100+ cards was quite an undertaking. Once I got started I pretty much spent all of my free time for two weeks making cards. It was also important to me that the class was realistic and stayed consistent with Hearthstone gameplay, which lead to some issues that I almost didn't catch. For example, originally I wasn't going to make any more Brew spells after MSoG since I was running out of ideas for them. I made the Moonshiner as one last Brew mechanic, but I realized that TGT rotated out of standard when Un'Goro came in after I posted the MSoG set. So I had to keep coming up with Brew cards so that Moonshiner would have at least 3 Brews to discover and the discover mechanic would stay consistent with Hearthstone. Would anyone have noticed or cared beside me? No. But I did it anyway because my nerd mind would go crazy if I was inconsistent with the actual game." 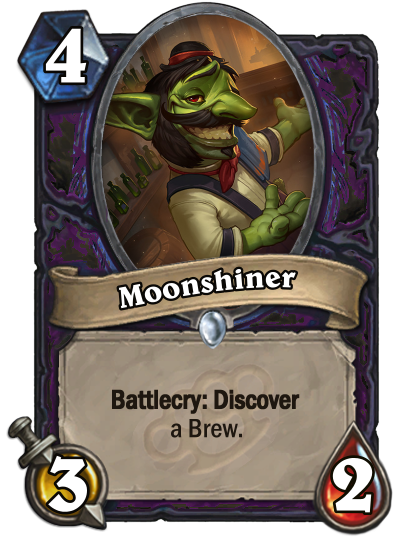 "Don't be afraid of criticism. The only way to improve at card design it to put it out there and get feedback on it. I've gone back and changed plenty of my cards when someone else noticed an inconsistency or error I made. And every time someone pointed out a mistake, I've been able to learn from it and improve my skills. If you're not willing to put yourself out there, you're not going to improve. If you've considered making cards but you don't think you would be any good at it, just do it! You might surprise yourself."

"If you haven't already been to the Custom Card forum yet, come on in! Even if you don't want to make cards yourself, you can always check out what everyone's been working on. I'm going to keep making cards for the Tactician as new expansions come out (and I've been dabbling with a custom expansion), so come check it out!"

That does it for today's installment of Fan Community Spotlight. Be sure to check out Hordaki's Tactician class, and I'll see you next time for another fan-made Hearthstone project. 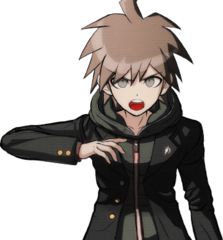