Amidst yet another very hectic and very chaotic reveal period for the upcoming Fractured in Alterac Valley expansion, there were a few noteworthy items that just didn't receive enough attention from us. With this post-Thanksgiving weekend hopefully offering more calm for everyone out there, now is as good a time as any to catch up with the news. After all, it's not often that we can talk about having any official data with regards to the Battlegrounds.

As some of you might've guessed by now, this Top 30 Heroes list from earlier in the week came to be courtesy of invaluable Hearthstone Scientist, Tian Ding. Over the course of this month alone, Tian has given us specific insights into the top performers in both the Standard format and the Mercenaries mode. It's only fair to shine some light at the ever bustling tavern of the one and only Bartender Bob (we do not talk about any other wannabe innkeeper impostors).

The timing of such ranking has been especially interesting in the wake of the introduction of the new Armor System for Battlegrounds, with the Hearthstone team having assigned tiers to all existing heroes. And because we still have this one hellish guest in the tavern, who has been causing more than enough ruckus - but apparently not for much longer. It's official: only a few more days remain to either enjoy Diablo's continuing dominance, or to wait it out if you really can't stand the current Battlegrounds landscape.

Diablo will be removed from Battlegrounds on Tuesday

First things first, the list as shared by Tian Ding: 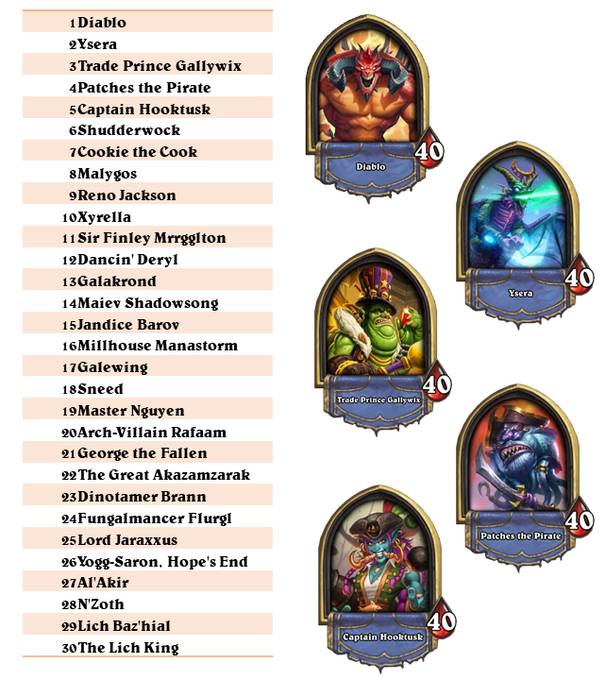 There are some surprising revelations: Patches the Pirate proving this superior probably wasn't on anyone's radar, as Pirates are far from being the most fearsome tribe. Ysera clearly demonstrates why she wasn't given any extra armor. And ah, Trade Prince Gallywix, that lowly tier 4 hero.

No shortage of the usual suspects and old favorites holding their ground (hey, Millhouse Manastorm and Arch-Villain Rafaam). We also see the new arrivals in the form of Cookie the Cook and Sneed upholding their reputations of being strong.

Lich Baz'hial sneaking into top 30 is quite a novelty - a sign of the added 'armor health' doing some work. Would most people actually place Reno Jackson, Dinotamer Brann, or Maiev Shadowsong that high?

If we compare the snapshot above with the published ratings that came out with the patch 21.8, we can tell who has been doing about as well as expected, and for whom the extra Health points in the form of Armor have been proving to be the greatest boon. Just remember, this is only the first iteration of this system (it's not even necessarily here to stay). We can expect some of the current armor ranges and tier placements to shift about as time goes by, based on the general dynamic data and ongoing player feedback.

It's fair to note that such top rankings might look slightly different on any given week. With 70 mainstay characters in the Battlegrounds, there is already quite a bit of in-built variance when it comes to the offering rates. On top of that, certain heroes work better with particular tribes or minions - nothing like some synergy to spice things up. Strategies constantly continue to evolve as high-level players try various combinations or different levelling curves.

But hey, would you look at that one unaccounted for, silently menacing presence - the Lord of Terror has been living up to his moniker, comfortably ruling at the top. And especially for the past week, drawing the ire of many in the Battlegrounds community. How quickly do the tables turn.

The Devil in the Room

You might recall that shortly upon his grand introduction, Diablo was dubbed a 'weakling', a 'disappointment', and the whole special event in which the entire tavern fights the Big Bad - a 'failure'. And so the buffs promptly arrived, causing the special minion spawn to start at 5/5 instead of the original 3/3 (and then doubling the stats every 4 turns). It might not've seemed like a big difference at a glance, but during these early turns even an extra +1/+1 can decide whether somebody takes a win or has to suffer a loss. Which matters doubly so for Mr. Diablo - collecting a trove of treasures while denying any drops for the opponents (and simultaneously slapping the rest of the players in a match). 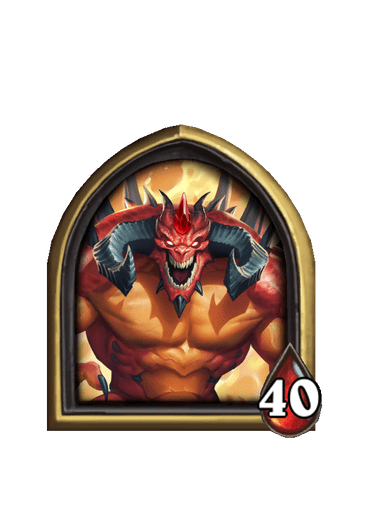 With the buffs - and as people learned to pilot Diablo better in order to maximize the early advantage and snowball from there - came the results. Suddenly weakling no more, the 'hero' started showing his potential in the capable hands. If you've caught any of the Battlegrounds action from the huge Hearthstone Global Inn-vitational event, then you might recall how well mastering Diablo worked out for Rdu.

If that wasn't quite enough, in the most recent major patch a few of the Diablo Treasures received further buffs as well. Just so he could have "another chance to make his mark". And so he did.

True Terror of the Tavern

It's been a curious experience to observe Hearthstone-related social media, especially for the past week and a half - it felt like every hour somebody, somewhere, had a complaint to file against Diablo's continued Battlegrounds presence. Which even led to some funny moments (like when Dog broke his temporary slumber to tweet in favor of Diablo's removal - to much audience approval).

Sunglitters might as well have been leading that entire anti-Diablo campaign. Victor, or as he is now better known under the adopted name of SunbaconRelaxer, fully agreed with these sentiments. Nina has really had enough. HapaBear and Nicholena could only nod along. ItsBen was further spreading the word, while Tesdey had some good fun tweeting at Iksar in the same vein as Brian Kibler does in defiance of the Questlines (that's a story for another day).

Add to that many, many more known streamers and top MMR players alike, it was becoming hard to actually find anyone who still enjoyed the Diablo experience. Zeddy has really summed it all up very well. In the end, that was certainly one surefire way to unite the community. We even got a lot of developer reactions as a result.

There was Celestalon showing a lot of patience and closely discussing the situation with a handful of upset players:

Reminder: I don't work on Battlegrounds design or balance. Diablo is a temporary hero. And he's a boss that everyone should be thinking about and playing around when he's in the lobby. If you aren't, you're feeding him, making it harder for others.

Regardless, he'll be gone soon. It's important that temporary events make an impact, otherwise what's the point? There are things that spice things up in a wild way, are exciting and fun for a time, but people burn out on and want to be over after experiencing it enough.

Temporary events are the best way we can do that. It's unavoidable (afaik, open to design ideas here) that people that play 12hr/day will burn out on this sort of thing sooner, and be tired of it. We have to choose an event duration to balance the enjoyment of everyone.

Whether you agree with this stance or not (or the fact there might've been better strategies against Diablo that players weren't considering due to their general discouragement), the point remains. It's good if the Hearthstone team can explore different avenues of gameplay, even if not everyone has got the patience to put up with temporarily skewed balance.

Cora and Matt London both had appropriate lighthearted takes on the situation:

We're on vacation until Monday. Can everybody wait until then to revolt about Diablo please?

Let this be a lesson to all of you that if you whine annoyingly enough you can accomplish anything.

Before anyone takes that last part too seriously, DeckTech was quick to clarify in a suitably corresponding manner:

THIS IS NOT THE LESSON; DIABLO'S END DATE WAS PLANNED AT LEAST AS EARLY AS WHEN THEY PUT IN HIS BUFFS!

If you're specifically talking about Diablo in BG, then there hasn't been much chatter about it because: 1) it was already scheduled to leave after the short period; and 2) the negative feels have only been around for pretty much while we've been out of the office.

I mean, it was always a reasonable expectation that the event would come to a close with the release of Fractured in Alterac Valley, or the pre-expansion patch. It's of no particular surprise we are now reaching that moment in time.

Amusing as it might've been for any bystanders without a personal stake in the game, this chapter is about to conclude. Don't you love it when everything neatly comes together. And thus the tale of Battlegrounds Diablo approaches its fitting (?) end. Not appreciated. Never loved. Forsaken to... maybe return someday in a different form? Or maybe never dare to rear his horned head again. His short reign will be remembered, even if not very fondly by the majority. If you got to be a part of it, that's another Hearthstone experience on the record.

Personally, I've had the peculiar luck of being offered Diablo more than a dozen times in not that many total games, and that's even without Battlegrounds Perks. He did indeed prove fairly adept at conquering the tavern. Surprisingly (?), there were still plentiful lobbies where nobody decided to pick this anti-hero, and at least several reports of people who claimed they had played a whole lot, but would still almost never be able to pick our dear Lord of Terror. 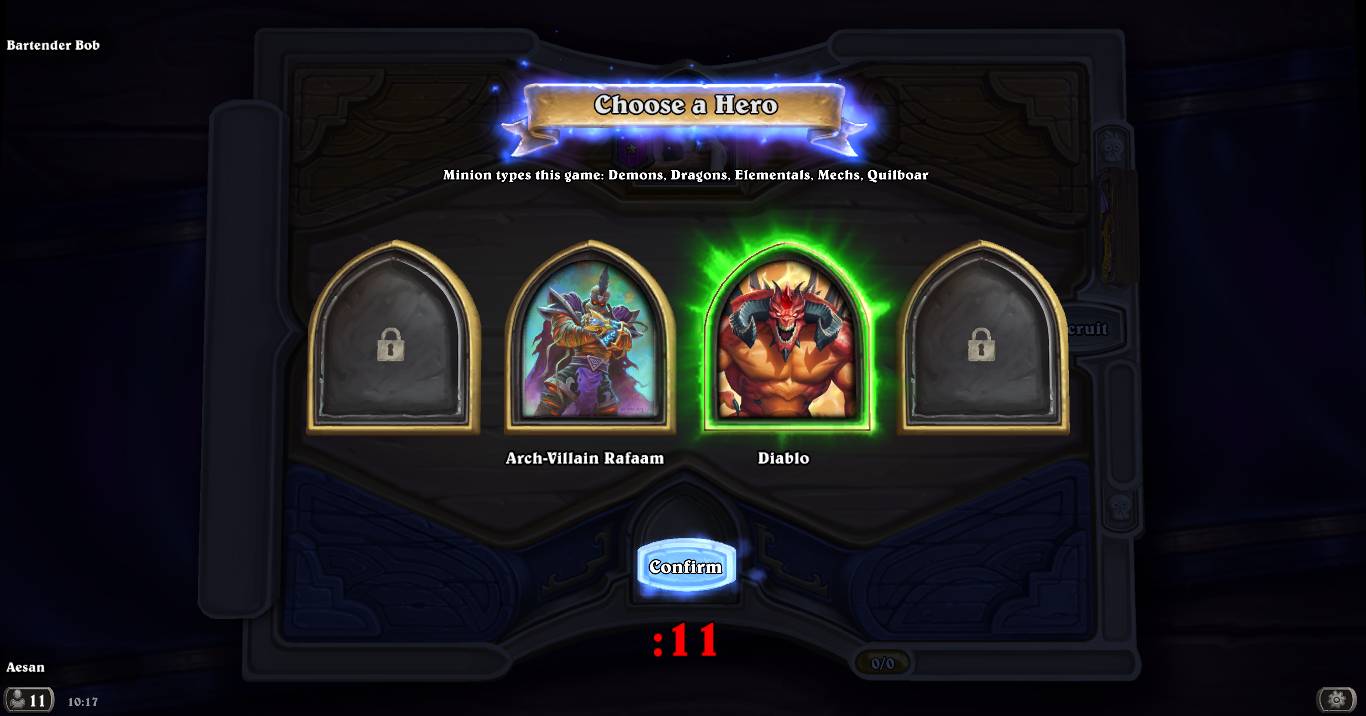 How about your own experiences? Being selected way too much or not nearly enough? Many games where Diablo lived up to his terror ways in your respective lobbies? Do you believe Diablo overstayed his welcome, or he could perhaps stand to hang around a little while longer?

In the immediate future, we're going to see how the Diablo-less Battlegrounds feel like again. It might be a wholly different experience for certain lobbies, as you won't have to brace yourself for the inevitable uphill battle every 4 turns. With the Armor System still in play, perhaps we will notice more changes in the existing Hero hierarchy. Somebody will have to step up to take the newly vacant throne, after all.

The new expansion (or maybe even the expected Tuesday patch) could bring us another thematic pair of Alliance and Horde characters to play with, for all we know. And/or a handful of further balance changes (the most recent addition Tamsin Roame is currently being considered to be one of the weakest heroes ever).

Finally, if listening to informative podcasts is your thing: ItsBen has recently had a chance to sit down with Cora (representing the Hearthstone design team) for his YepBoat Battlegrounds Podcast, and discuss a wide range of topics. Very worthwhile if Battlegrounds are near and dear to your heart:

I got to sit down with dev @Songbird_HS and ask a bunch of interesting bg questions about: design, balancing, armor, MMR system, heroes, new tribes, tournaments, DIABLO… Enjoy!! https://youtu.be/TQbWCby8eCY

We will see you in the tavern! Stay safely away from Diablo's claws meanwhile.