The full Fractured in Alterac Valley set has been revealed and it's time to look at all the new cards and, specifically, at how Demon Hunter will be doing this expansion. We'll be breaking each of the Demon Hunter cards down, judging their potential power levels and giving our thoughts on their place in the upcoming meta.

Fractured in Alterac Valley is giving Demon Hunter support for two familiar archetypes: Big Demons and Tokens. The Big Demon package is getting more ways to cheat Mana and summon large Demons, as well as a defensive unit to keep themselves alive that long. Token decks are getting more token generators and potentially the best "Kill Your Darlings" payoff the deck has ever had. Playing by itself is a weapon that could see play in aggressive Demon Hunter decks. 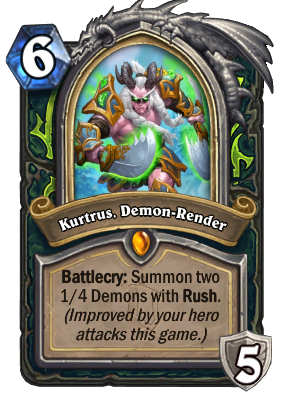 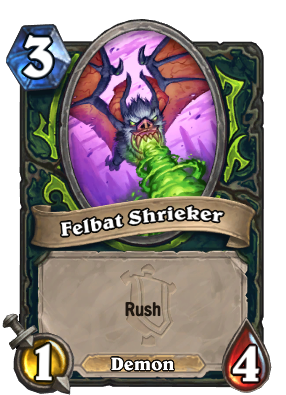 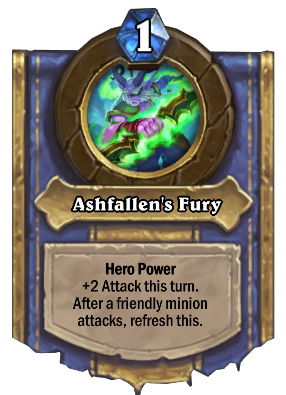 Doesn't even need a GPU.

Kurtrus synergizes nicely with Tokens, but he appears to us to be powerful enough (and, at 6 Mana, cheap enough) to serve as a mid-game power spike for just about any Demon Hunter that wants to Baku their Hero Power. We expect to see a lot of Kurtrus, Demon-Render on the ladder, in plenty of different decks. 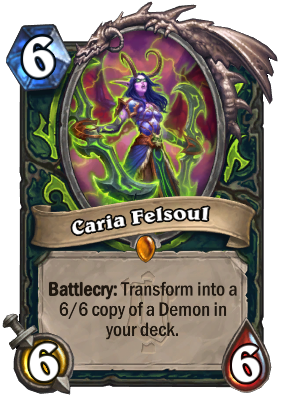 Caria Felsoul is the first of two Big Demon Mana cheaters from Fractured in Alterac Valley. As a 6-Cost minion, Caria's transform effect promises to save you a couple of extra Mana, whether you're transforming her into Pit Commander, Ancient Void Hound, Hulking Overfiend, or Illidari Inquisitor. She promises to have a big impact on games that only run Big Demons.

She can also turn into a 6/6 Battlefiend, which we don't think sounds all that terrible (granted, we put ketchup on everything). 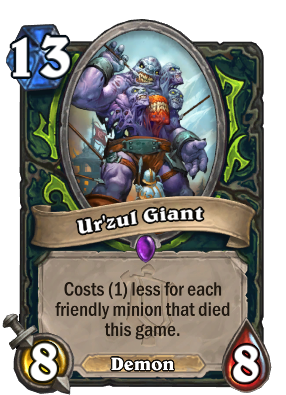 Ur'zul mothers complain about all the mouths they have to feed.

Ur'zul Giant is a very strong payoff for Demon Hunter decks that summon a lot of Tokens and then watch them die--even better than Wrathscale Naga, for the very simple reason that it doesn't need to be on the board to benefit. In the right decks, reducing the Cost of Ur'zul Giant to a small number shouldn't be too difficult and, combined with the copying power of Felosophy, could be the key play for Token Demon Hunter.

In short, we expect this card, like most Giants, to see play for the very simple reason that playing cheap Giants will always be a winning strategy. 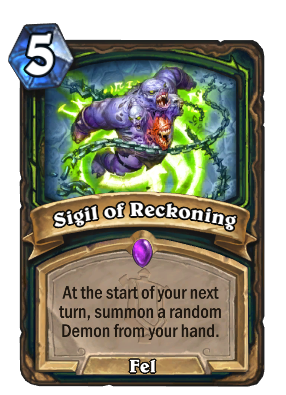 "How big you reckon those Demons are?" *spits*

Shadow Hunter Vol'jin comes to mind as one of the first true enablers of Big Demon Hunter decks that wanted ways to cheat their large monsters into the battlefield, and Sigil of Reckoning copies both the effect and the Cost of the Shadow Hunter. Otherwise, it's better: you don't need a minion in play to swap back into hand, and you can run cheaper minions for Tempo purposes so long as they aren't Demons. Sigil of Reckoning is much more reliable and definitely something that could enable the archetype.

We're not sure exactly how strong Big Demon Hunter will be, but Sigil of Reckoning is going to be its main engine as it looks to cheat mana and run its opponent down with Big Demon after Big Demon. 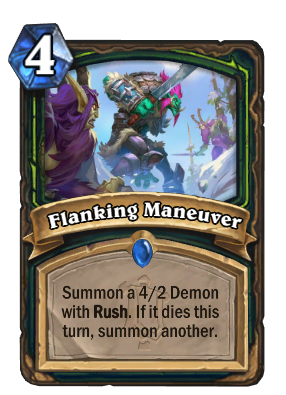 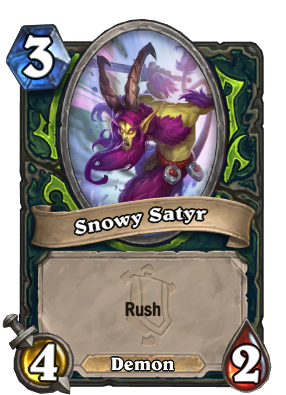 Flanking Maneuver potentially provides two decent-sized Rush minions for the price of one, which is ideal for answering two medium-sized minions or one very big one. It also synergizes well with decks that already want to be killing off their minions, which means it could have a place in "KYD" Token decks. As a clean answer to something like Flesh Giant, this could has a real chance to find its niche in the meta. 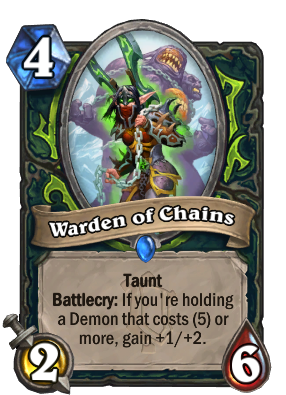 They're a lot better than Wardens of "Stay Here, Please."

Warden of Chains is a very defensive Taunt minion for slow Big Demon decks that need an early roadblock to keep themselves alive long enough against aggressive decks. A 3/8 Taunt for 4 is going to be trouble for a lot of aggressive decks and, because he doesn't interfere with the deck's ability to pull out Big Demons, we expect that at the very least this Warden will get some looks in Big Demon lists. 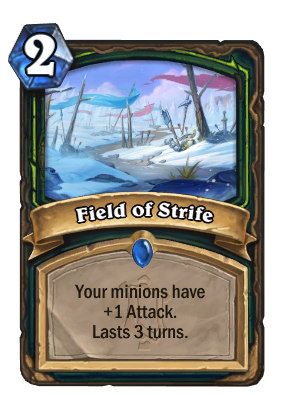 Don't let the name fool you: It's actually quite nice.

Field of Strife is good fuel for Demon Hunter decks with a lot of small minions and token generators, giving those little guys the ability to punch up into enemy minions or deal extra damage to the opponent's face for only two Mana. This is actually one of the better "Landmark" cards from Fractured in Alterac Valley, since it doesn't do something at the end of the turn, it does it right now (and for two more turns). The immediate impact is very reminiscent of Savage Roar, one of the classic Token finishers.

If Demon Hunter can scrounge together a Token deck that at all resembles something Druid could muster, then we'd expect to see Field of Strife included to give the deck extra board control and finishing power. 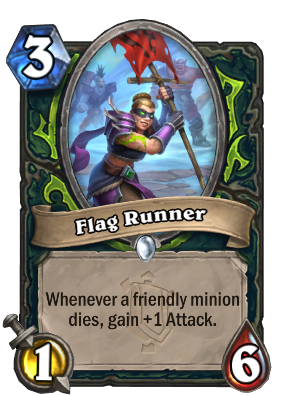 Hey, you! Get back here with our flag!

Flag Runner is similar to Ur'zul Giant in that they both care about your minions dying (and by "care" we mean that they want it to happen), the only difference is that Flag Runner needs to be in play to gain any benefit. This minion could be exceptional in Token decks that are heavy on small Rush minions that can trade into their opponent's minions while buffing the Flag Runner, or it could be good solely as an on-curve threat. 6 Health on a 3-Drop is difficult to deal with, so it could be a menace if Demon Hunter finds the right tools with which to abuse it. 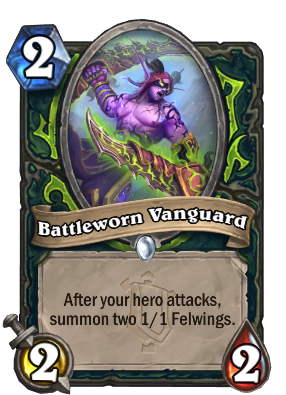 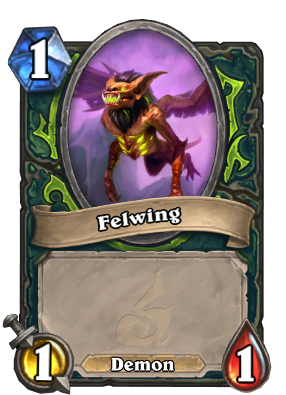 It's pretty difficult to get a battleworn jersey.

Battleworn Vanguard is an early-game Token generator for Demon Hunter, and synergizes with the deck in much the same way as Kurtrus, Demon-Render. The Vanguard is essentially a more powerful Sharkfin Fan (by summoning two minions instead of one) and will likely be a must-run in any Demon Hunter deck that wants a lot of Tokens, both to summon and to kill. 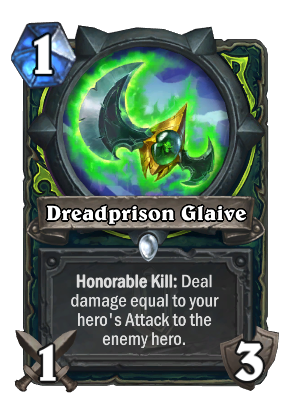 The only place capable of holding the Dread Pirate Roberts.

Although we don't think that it synergizes with Token Demon Hunter decks as well as some of the other cheap Demon Hunter weapons, it has just enough flexibility and power for its Mana cost that it's likely worth experimenting with in a variety of decks. 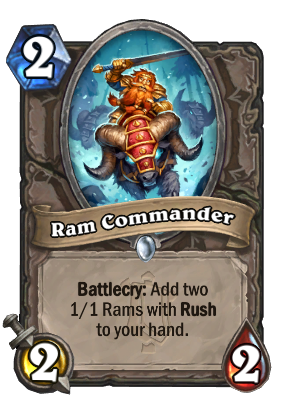 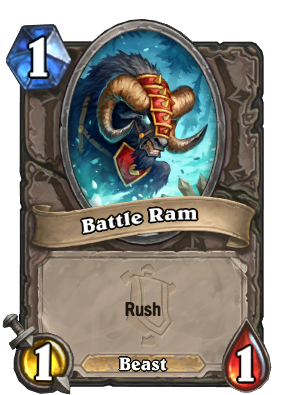 Ram Commander gives Token decks more fuel for the Ur'zul Giant fire with cheap Rushing Rams that benefit from Field of Strife while buffing Flag Runner. Sneaky synergy with Derailed Coaster, another card that Token Demon Hunter could be interested in. 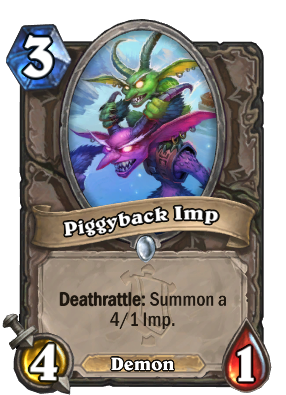 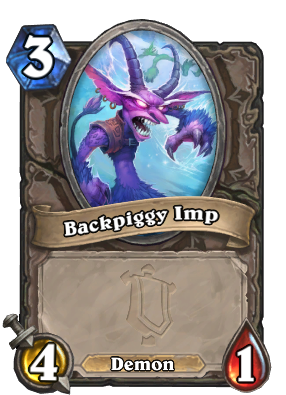 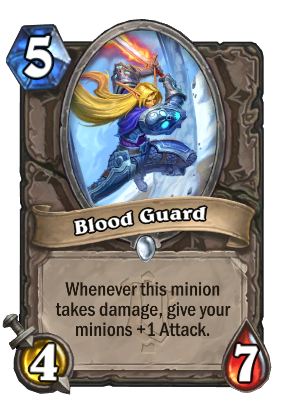 Blood Guard is almost too expensive, but has the ability to buff an army of small minions if you can find the right enablers (Pen Flinger, perhaps?) 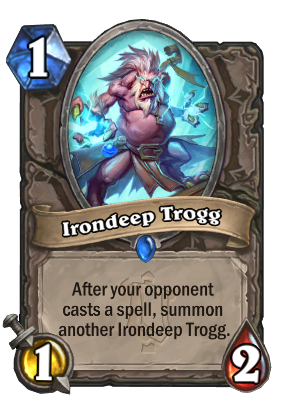 Irondeep Trogg says why summon your own minions when your opponent can do it for you? While this little minion doesn't look too scary, if you time it right you could force your opponent to give you a couple of extra minions, which is great for buffing or for Ur'zul Giant. 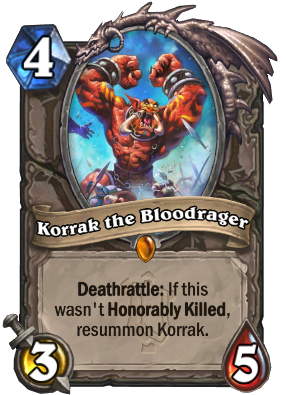 Korrak the Bloodrager is very annoying to deal with, and should slot in pretty easily to Deathrattle Demon Hunter decks thanks to how hard it is to kill him. His re-summon effect also has the potential to feed Ur'zul Giant. Should be a lot of fun (for you).

Token Demon Hunter looks ready for prime time, mostly thanks to Ur'zul Giant and the number of cards that Demon Hunter can use to copy it. This deck goes full Ur'zul by including the expected two copies of Felosophy as well as Zai, the Incredible. Zai can copy Giants, or find something else (like Kurtrus, Demon-Render) to copy instead. Our army of cheap Tokens (aside from benefitting from Field of Strife and feeding Feast of Souls) will work to make our Giants as cheap as possible as quickly as possible so that we can end the game.

The use of Kurtrus, Demon-Render in a Rush Tokens deck has Regis Killbin calling the archetype "Kurt Rushell." It sounds like a reference to someone we've never heard of, but we're sure we'll find it funny once someone explains it to us.

To reiterate: Our win condition is copying Ur'zul Giant, a hateful 8/8 that looks like John Carpenter's The Thing and can cause big trouble thanks to little tokens. If the Giant plan goes awry, Kurtrus, Demon-Render will swoop in like Snake Plissken from Escape from New York and tell your opponent "I'm your huckleberry." Guardians of the Galaxy, Vol. 2.

Closing Thoughts on Demon Hunter and Fractured in Alterac Valley

Demon Hunter has received some very good cards for both Token decks and Big Demon decks. Thanks to these new cards, we think that both archetypes (as well as familiar mainstays like Deathrattle) will be viable ladder options for players looking to try out new things. There are a lot of options for playing Demon Hunter, and we're excited to see what the class does in the new expansion.