As one of the most known competitive players and streamers in Hearthstone's storied past, Thijs probably needs no further introduction - but we're still going to cover our bases here, just in case. Often cited as the highest HS esports earner (over 500,000 USD to date), two times European Champion (under the former HCT circuit), the winner of a highly coveted Aston Martin in the EU vs CN 2018 competition (no, he did not keep that car); also happens to be known for his alter ego (it's just an immortal meme at this point) as one Kolento, yet another renowned player from a bygone era.

And that's not even mentioning the memorable semi finals of the 2015 World Championship, or all these past seasons of Grandmasters where Thijs played an integral part from the very start (you couldn't open the chat without seeing somebody more or less seriously ask "when is Thijs playing?"). That journey ultimately came to an end a couple of months ago, but with the newly announced Hearthstone Esports plans for 2022, who knows what the future has in store?

Most recently we got to see Thijs play Mercenaries as part of the EU crew for the huge Hearthstone Global Inn-vitational, while of course continuing one of the most popular Twitch streams in the scene. Always the one to show that uplifting personality, Thijs has also started thinking about running his own tournament series, and - since the interest was certainly there - it didn't take long before something was in the works. Now we know just what to expect.

Introducing Thijs' Legends Invitational, an in-house online tournament made possible with the help of his organization, G2 Esports:

As you can see from the graphics above, the 2-day long tournament is upon us. A lot of the details have actually been a little difficult to come by, not being publicly shared in one place but instead mentioned here or there across various tweets or during the streams. It's their first time organizing anything of the sort, so perhaps certain challenges were to be expected. Hopefully the main event goes swimmingly, here is everything else that we know:

And last but certainly not least, all the players taking part:

You thought World Championship will be the best tournament of the year?

TO THE THIJS LEGENDS INVITATIONAL! Amazing player list & thanks @G2esports for making it happen. 22 + 23 Dec

Quite a stacked lineup. Gaby, Bunnyhoppor, NoHandsGamer, and Alutemu are all current and renowned Grandmasters (as well as known streamers on the side), with Feno being another example of a former Grandmaster-turned-successful-streamer. Very popular Dragonmaster Brian Kibler tends to win most tournaments he gets invited to, and everyone should recognize Cora as the current Game Designer for Hearthstone. 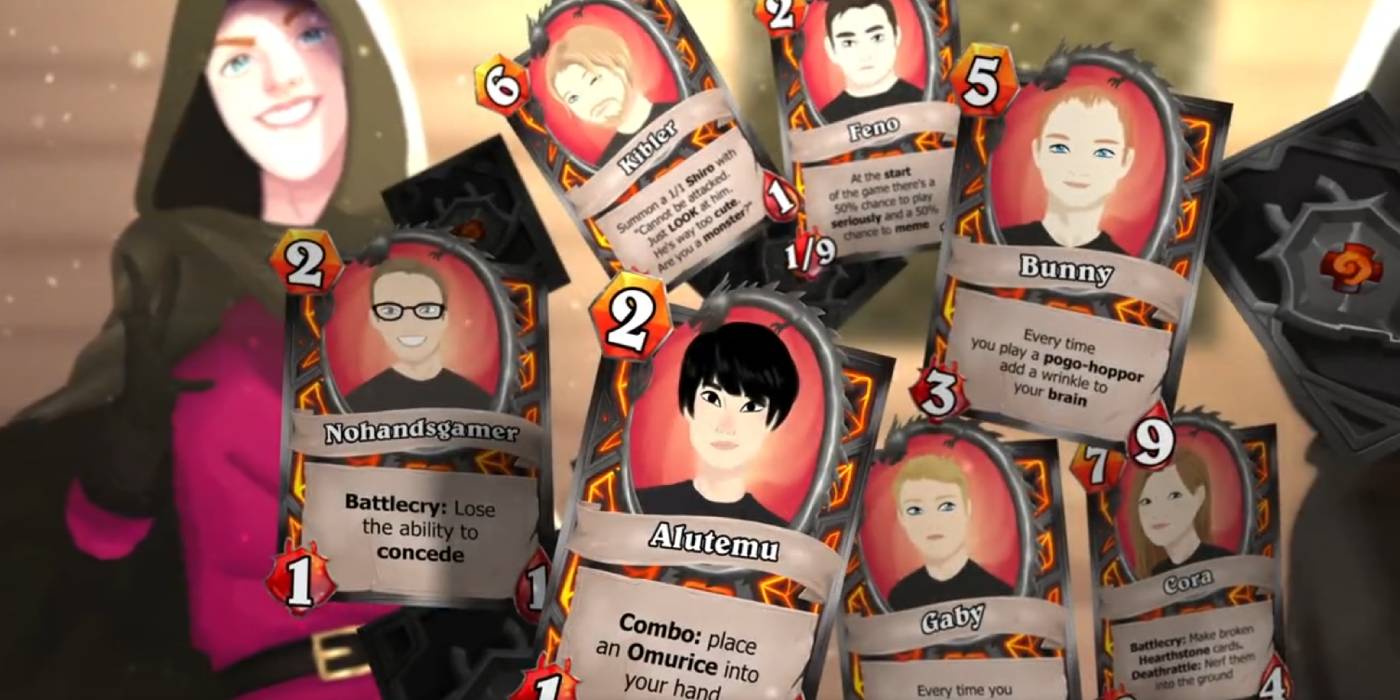 But wait, there is one more spot that was reserved for anyone capable of defeating an open field of a few hundred competitive players. That honor went to one Kleenex:

Don't ask me how, but I just won @G2Thijs' invitational qualifier. Come watch me on stream tomorrow.

Courtesy of FirmeX, one of the admins for Thijs' tournament, we've also got a full planned schedule for the event (all times are in CET). Not every single game could make it to the broadcast (disclaimer: this is a 'rolling' - or flexible - schedule, so the exact timings might shift if games go faster or slower than anticipated; something we are probably all used to when it comes to Hearthstone matches): 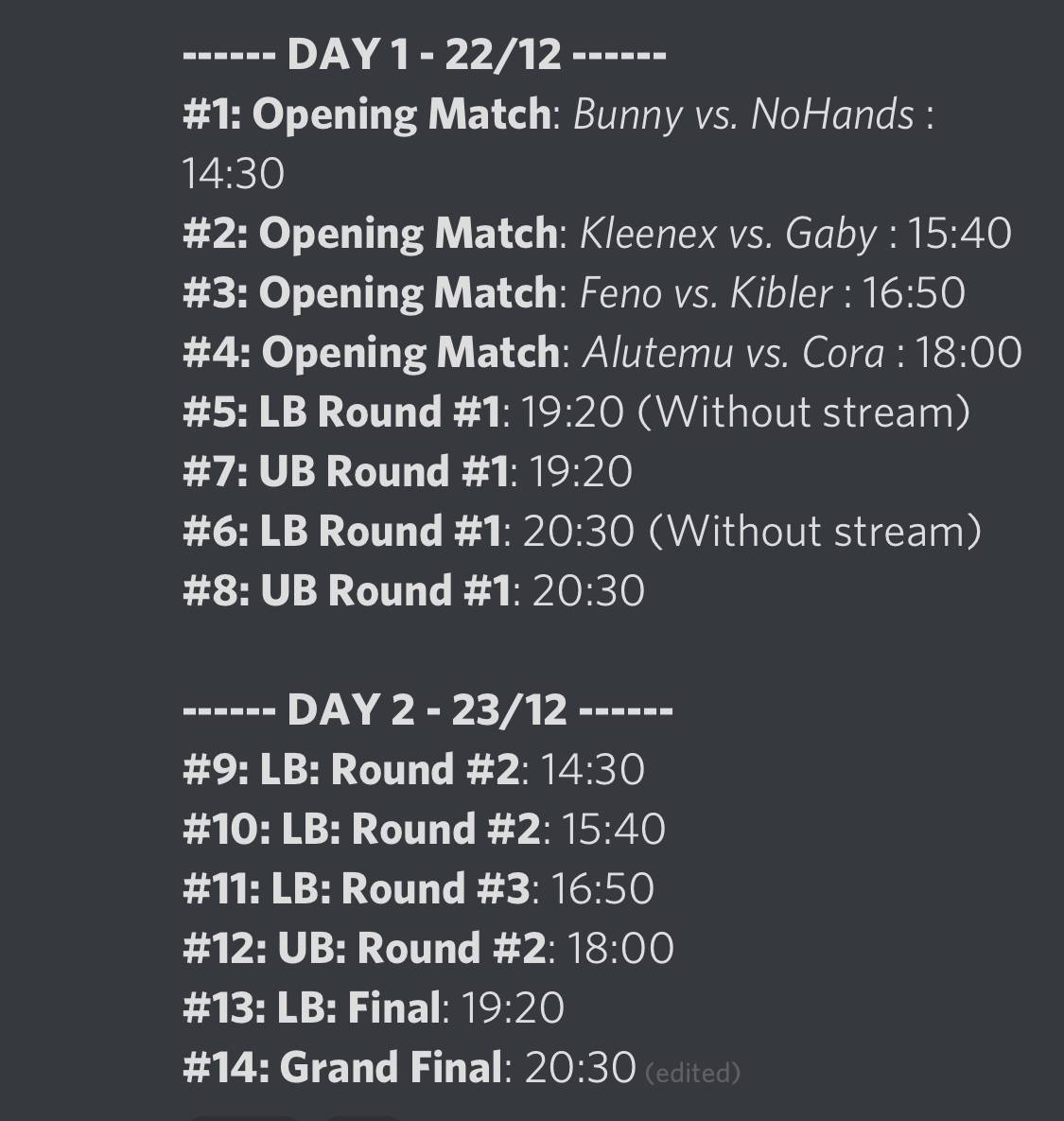 The bracket in its full glory: 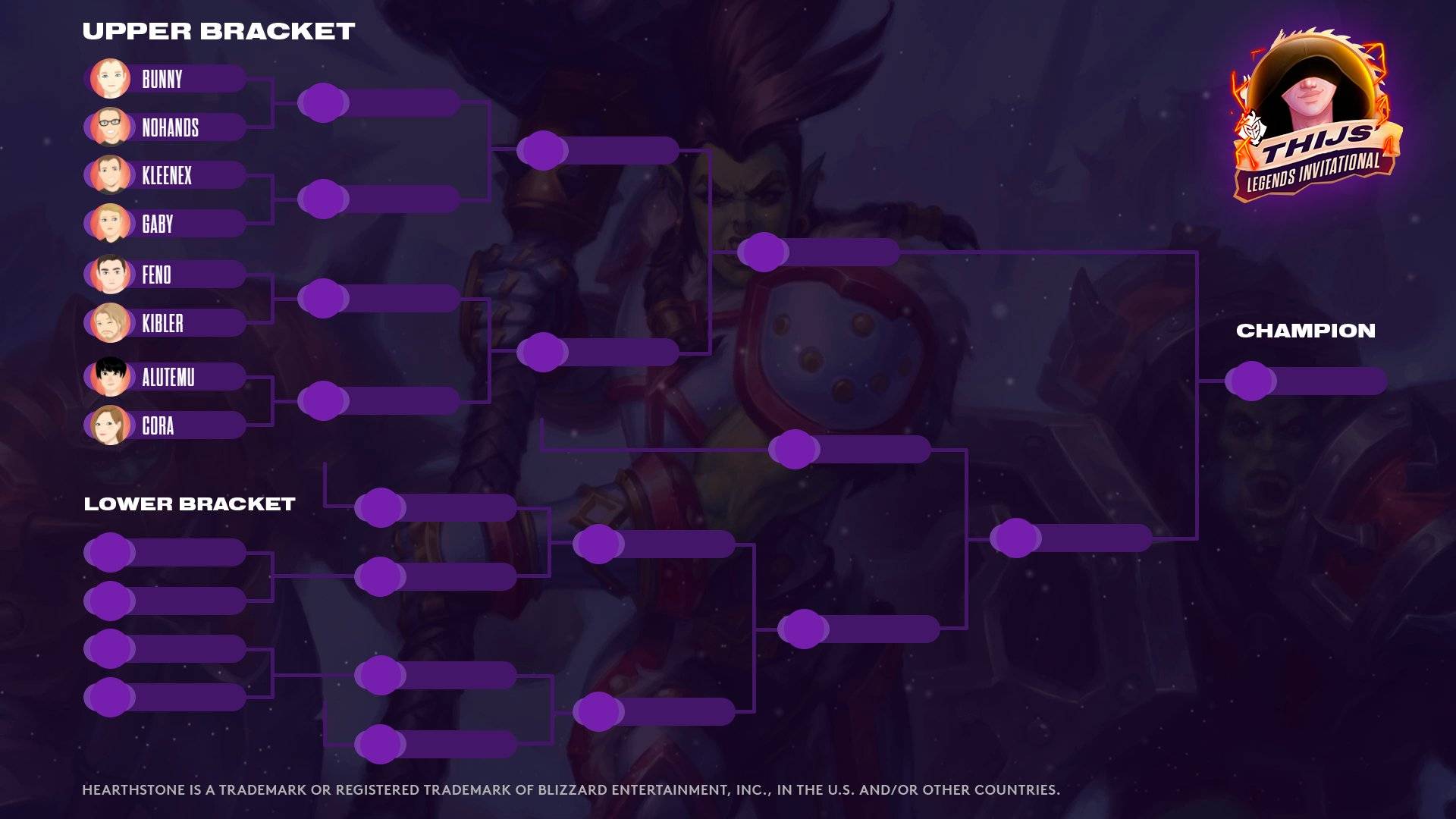 And the opening matches for Day 1: 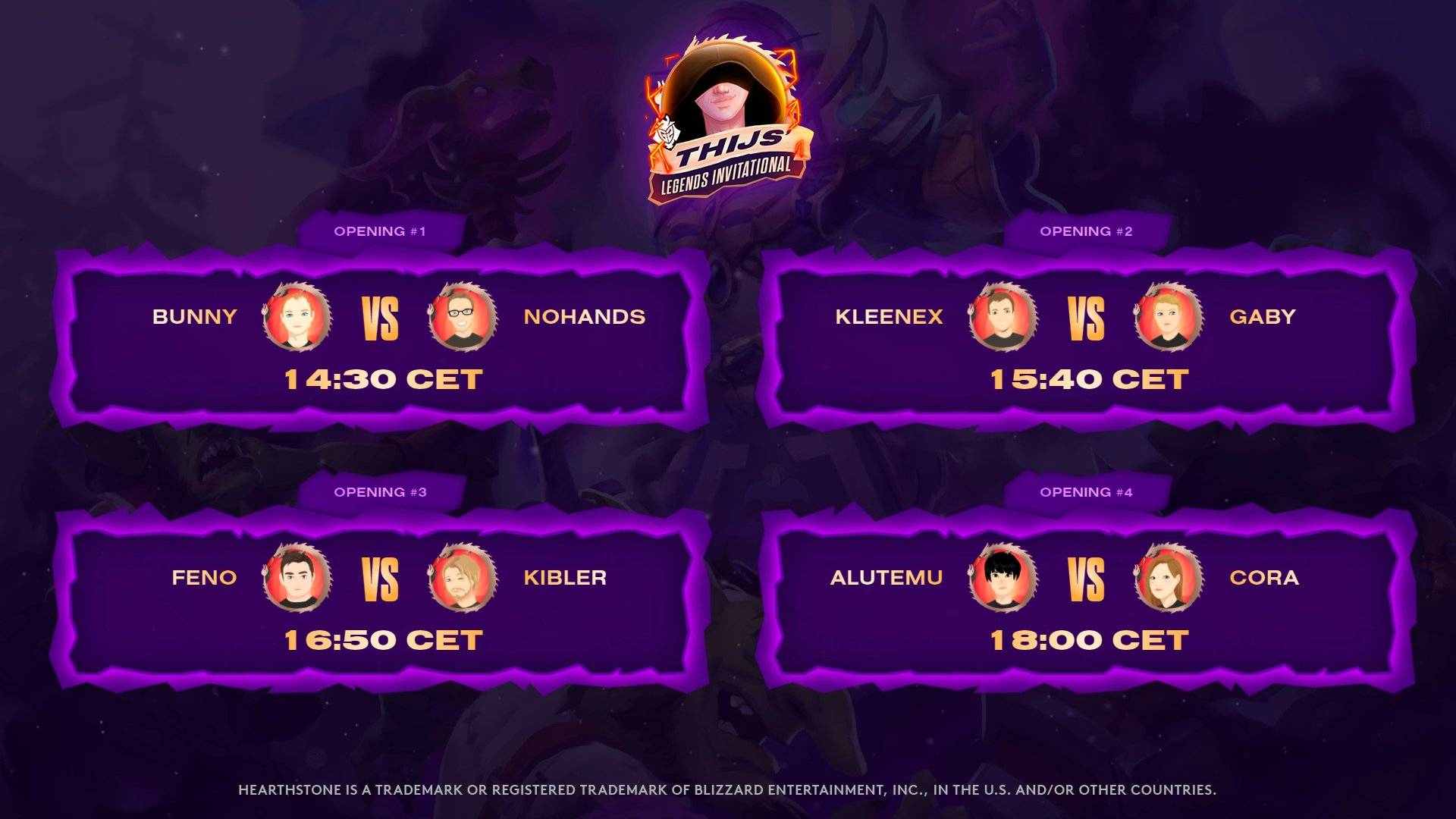 Kleenex and Thijs' account have also tweeted out some of this info. It greatly helps if anyone is looking to tune in only for specific matches of their favorites, or be there for the decisive rounds. We are expecting fairly long streams as a result; don't forget there might be something in it for the Twitch chat participants as well!

That's the most essential information about what is coming, but it's not yet everything deserving of a special mention.

Behind the Scenes and Side Activities

To begin with, Thijs has promised various giveaways and mini-games for anyone following along as part of the Twitch chat. The players themselves are not going to merely just compete in the regular Constructed showmatches, but also be involved in some of these activities as they unfold. The team worked hard to make it a fun community event, hoping to recreate some of that tight-knit camaraderie from the smaller celebrated tournaments of the past:

While the tournament is ofcourse very competitive, I also want to bring the "fun" aspect in (think of Seatstory/ATLC) with player mini games in between the matches. The purpose it that it will be a fun event for the community.

And if the tournament goes well, I hope to do 2 or 3 very big events next year with possible including a BG/Team element + casts in other languages. I hope you like the idea, Lets bring the community events back. All questions are welcome!

Fingers crossed it all does work out as well as it's being hoped for. We don't see that many 3rd party Hearthstone tournaments anymore; especially not with notable prize pools. Although we've had the likes of DreamHack Beyond and Global Esports Tour reviving some of that fun competitive spirit in the latter half of this year.

The aforementioned Qualifier for Thijs' Legends Invitational was scheduled for Monday December 20, and that's indeed where the first 5 rounds took place following multiple delays. All because Blizzard has decided to drop that surprise patch on everyone, which in turn caused various issues for the organizers (complete with deck resubmission for all participants). Poor Thijs wasn't particularly happy about it. This also meant the remaining rounds had to be moved to Tuesday December 21 (as in yesterday). You can still find all the brackets and decks by using that Battlefy link to the tournament - it was a really strong field with a number of known players all competing for that one open slot. 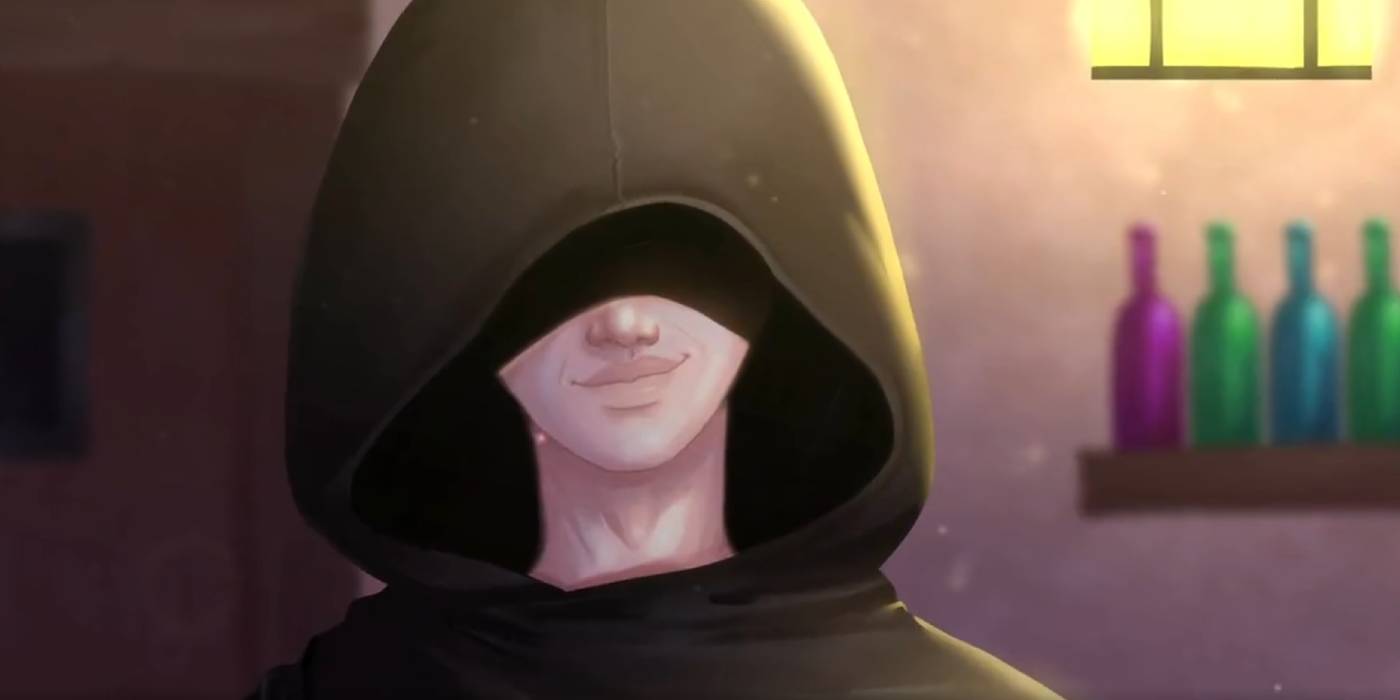 Having a member of Hearthstone's design team openly participate in an invitational with prize money at stake might come as a surprise to some observers - although rest assured, no hidden RNG buttons should be pressed at the right time to work in Cora's favor. There is actually a very good reason behind it, followed by actual due process:

So Thijs messaged me a few weeks back and was like "do you want to play in my tournament?" And I'm like, you know you can ask Gallon or Chakki or BoarControl, right? And he said yeah, but we want you. So I said yes.

Any prize money I win (though with this lineup I'm doubtful lol) will go to @GamersOutreach. Shoutout to PR and legal for clearing me to participate. I'm really really excited, and it should be a lot of fun.

Let's not forget that Cora has a fine Hearthstone casting career behind her, and was also known to dabble in the competitive side of things. Thijs certainly had the right idea!

It also happens to be the first notable tournament taking place in a fresh new metagame, following some highly desired nerfs and buffs. Perhaps we might see an interesting new deck or two - even if not everyone will be there only to compete in a deadly serious manner. Spreading some joy right in time for the holidays also has a lot of merit!

We realize that these starting times can be rather awkward for many people busy with their work or school in the middle of the week; that's one tricky aspect of trying to host events for players from all across the world. Various timezones can be difficult to accomodate. If you are willing and able to tune in to Thijs' live stream at any point today (and tomorrow), it might be worth your while! Otherwise the broadcast will still be there for one's viewing pleasure, which could be an enjoyable experience in its own right.

Also a shout-out to Dapperdog who had the same idea as us and thoughtfully decided to give the community a heads up on the forums! See you all there if you happen to join the Twitch chat during the event.