The Mercenary characters that we were introduced to at the start of the Year of the Phoenix through Forged in the Barrens brought us a full year of watching characters grow. Each expansion saw the Mercenary characters getting more powerful and through the Book of Mercenaries we got to learn more about each of their stories. Towards the end of that adventure, the Mercenaries game mode released and brought them, alongside heroes and characters of old, together to take on PVE and PVP challenges in a brand new game in Hearthstone. This doesn't appear to be their endgame though as you will soon see.

As always, datamined information is subject to change prior to release. Don't shoot the messenger!

Hearthstone Duels' season is ending, and very soon! It has been teased that the team was working on a fresh update for the game mode that has been out since last year's mid-year release of Scholomance Academy. "Wizard Duels" as the inaugural season was called, showcased characters from Scholomance as our deck overlords and a variety of Hero Power and Signature Treasures that were unlocked from older sets.

To say players have been wanting to see some fresh faces in the mode would be quite the understatement. It looks like we may soon be getting what we've wanted for so long.

Hearthstone's Mercenary Characters Coming to a Duels Near You

You read that right! We believe that the 10 Mercenary characters are all going to be coming to Duels as new playable heroes.

Now, we can't say for certain if they are going to outright replace the existing Scholomance heroes, nor do we know how anything is going to work with Hero Powers and signature treasures, but what we can say is their voicelines appear to confirm their inclusion.

Internally in the Hearthstone client, each card or hero has audio files attached to them with their voicelines. Files are usually named in a structured way which includes their card ids and what the sound is for (such as attack or death). As an example, let's look at one of Felfire Deadeye's sounds.

This filename tells us a few things about the sound:

With this, we know a lot about the sound file and know exactly what card it would attach to without needing to do any complicated digging. So let's look at a recent addition to the game, Barrens Bru'kan.

The Fractured in Alterac Valley rewards track has a reward at level 15 which is Barrens Bru'kan. 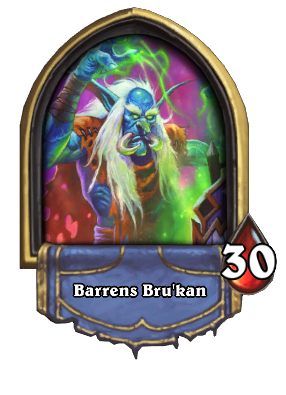 As with all heroes, Bru'kan has a set of basic voicelines and his voicelines also follow a similar format when compared to Felfire Deadeye.

Nothing looks crazy here, the format is the exact same but we see its a Hero card due to it's internal string ID being "HERO_02p". For those interested, "HERO_02" is the base that all Shaman Heroes receive in their Hero card IDs and "p" denotes that its the 17th Shaman Hero Skin (Blizzard goes in alphabetical order when adding letters to the base). But that doesn't matter, what matters is what comes next.

Whoa. The exact same voiceline of "Do you feel the storm coming?" is attached to a clone of HERO_02p. Although the "PVPDR_Hero_Brukan" card does not exist currently in the Hearthstone data that we have access to, this reference to the card id tells us that we're getting a new Duels hero that features Bru'kan! How? The filename.

"PVPDR" inside of Hearthstone's data points to a card that is attached to the Duels mode. With Hearthstone Duels stemming from Dungeon Run, the lovable and repeatable game mode that spawned many different iterations throughout time, was the basis for Duels and it is reflected in it's internal name. This is the Player vs Player (PVP) version of Dungeon Run (DR) - or PVPDR.

Now, what is more interesting is this isn't the first time we've seen this happen with a Mercenary character. Other Hero Skins also have voicelines that point to their inclusion as Duels heroes though it is less clear than the Bru'kan version as their voicelines are intermingled with the regular version of their portrait skin, and sometimes across multiple skins which means we don't know for certain which skin will be the final version for Duels.

You can visit the above card pages to listen to their voicelines and see their filenames - we don't edit them!

Demon Hunter, Druid, Priest, and Warrior classes do not have any Hero Skins tagged with PVPDR voicelines.

With Paladin's Trainee Cariel's and Mage's Apprentice Dawngrasp voicelines only being tagged as PVPDR and not the Hero Skin's voicelines, it makes us question Blizzard's intentions. Were we supposed to have a Duels update earlier in the year and these portraits were finished some time ago to be a part of it? Was their inclusion in the rewards track something extra that wasn't planned but delays sent them to become rewards track bonuses? It isn't likely that we'll ever get an exact answer on that, though it's worth considering since it doesn't seem to make sense to name a Hero Skin's voicelines after a specific game mode.

While we're on the subject of Hearthstone Duels and datamining, it's worth bringing up a relic from last year's Darkmoon Faire expansion patch. This was originally missed in our datamining efforts but we're bringing it up here because it's an odd one.

Cafeteria Bob, who has no assigned image or voicelines, much like Kulzon, Castmaster who was added in the same patch as an unplayable Duels Hero, does have the same assigned Hero Power as all other Duels Heroes from Scholomance - Mrglmrgl MRGL!. Notably, this Hero Power was used in the Giantfin fight in the League of Explorers adventure. This is possibly just a requirement that every Hero needs to have an assigned Hero Power and so this one was chosen as it was a fun one. Bob's addition as a Duels character though does make us wonder if we'll see him in the future or if he's stuck in Battlegrounds forever.

So, there you have it. There is some serious evidence of Hearthstone's Mercenary characters not being ready to hang up the towel quite yet and it looks like their inclusion in Duels is going to happen. Could this be the update we'll see in January when the current Duels season ends? Only time will tell.

Huge Updates Coming to Hearthstone in Patch 22.2 Next Week - Here's What You Need to Know