It's been over a month since the introduction of the Honor system (going live slightly earlier than intended) added a bonus component to our Hearthstone games. For some, it was merely an uneventful choice between the two free Legendaries - that is Vanndar Stormpike and Drek'Thar. For others, the entire faction pride was at stake with the decision to represent either the Horde or the Alliance, with the ranking icons/titles to match. The overall familiarity with the general Warcraft lore or its most popular MMO title might've certainly played a prominent role here.

Now we're looking at the remaining set of days during which the final Honor standings should be decided once and for all, to be preserved for posterity through a special Diamond version of either of the two cards above. So if you have a particular horse in this race, there won't be a better time to double down on the grind. And if it's all the same to you, then nothing really changes until the end of the Fractured in Alterac Valley expansion.

Clarification: The period for tallying the winning faction is from December 7 to January 11, but you can collect Honor to complete your personal Legendary Quest Chain at any point throughout the Fractured in Alterac Valley expansion. After the expansion period, the Legendary Quest Chain will be replaced with another means to earn these rewards.

It's a little unclear whether January 11 will still count (especially for regions such as Asia and Europe) for this exact purpose of deciding the winner/the Diamond card, or whether there will be an unknown cut-off point early on with a blog post to follow on Tuesday at the standard Hearthstone news time.

If you haven't been around much lately or need a refresher on what this whole deal with the Honor system and its intricacies even is, here is our previous detailed coverage of the subject:

The Fight for Honor So Far

To date, we've had a couple of small updates to keep us posted about the flow of the whole the Alliance vs the Horde clash - as promised by the Hearthstone team. The first one arrived more than two weeks ago on December 20, just tacked on at the end of the Winter Veil announcement. It didn't even get its separate mention in the blog title and frankly felt more like an afterthought; yet our comment section was still largely concerned with the ongoing Honor struggles rather than any merry celebrations. It's also worth pointing out that despite the date of release, the data we were given only covered the time frame from the start of the expansion to December 14 included.

We’ve received an update from the front after the first skirmishes in Alterac Valley, based on information through December 14! The Battle for Alterac Valley has been fierce and hotly contested. Both sides have fought with Honor, with each faction already amassing over one billion Honor! The Alliance has taken an early lead in the contest. They have rallied together for an advantage in overall numbers, and together they are strong! Will the steadfast Alliance be able to defend their foothold, or will the Horde rally to take back the valley?! It is up to you, brave adventurers, to shape the course of this battle.

Still, that initial peek into the faction proceedings had actually managed to surprise quite a lot of people: up until then, it was generally believed that the Horde might've gathered a more dedicated crowd (they were most certainly the loudest on the social media), and that Drek'Thar could've simply been more competitively appealing than Vanndar Stormpike. There was also a small subsection of players who tried to outsmart everyone in the process, including themselves apparently - if Horde was such a solid favorite, it made more sense to actually pick Alliance and be able to farm more Honor quicker by running into larger numbers from the opposing faction. Funny how all of that worked out.

After all, even the folks on the Hearthstone team didn't quite expect to see that outcome:

And how about that Alliance being ahead in the battle for Alterac Valley?! I really did not see that coming. All you Horde players are so loud on here that I thought we were outnumbered like 10:1.

Afterwards came the holidays and the new year rolled in, with Hearthstone players (presumably) finding more spare time to catch up on their Honor grind meanwhile. We've also received another update this week (no blog post, just a short tweet), making it the last look at the current standings before the final score gets published:

Here's where we stand going into the final week:

Honor earned by both sides: 3 billion!

Alliance holds the lead! Can the Horde mount a late comeback? Let's see that Horde pride!

That's a fair amount of Honor collected by both factions, even though the Alliance doesn't let up. Whether that's any sort of a sizeable lead or if it's all still relatively close between the two sides, we don't really know. The time for such details might come next week. For now, the Honor efforts continue with the end in sight.

Contributions and the Final Tally

With extremely dedicated players such as these, it's no wonder that Alliance has been doing very well. I couldn't even begin to imagine the amount of games required to collect so much Honor, with people being able to complete the Legendary Questline seemingly in an instant.

Apparently you should still be able to view your increasing Honor count far beyond 7200 it takes for all of the Golden card rewards, as long as you've collected that free Hero Skin from Alterac Valley Gameplay achievements. Not that there is anything else to gain there besides such bragging rights and faction pride, but at this rate we shouldn't be surprised if somebody actually hits 100k Honor before the end of this expansion. Madmen, all of them.

From playing on Standard ladder with a bit of Arena and Duels in the mix, I've certainly noticed how many players already got the ranks of Marshal/General or above next to their names. Makes me feel that my own contributions have been very modest in comparison, with around 1500 Honor gathered for the Horde and slightly over 2000 given to the Alliance. My sentiments and heart are still more closely attached to the blue faction, so I know where I'm going to dedicate most of my efforts in these remaining days. Got to keep that precious lead. 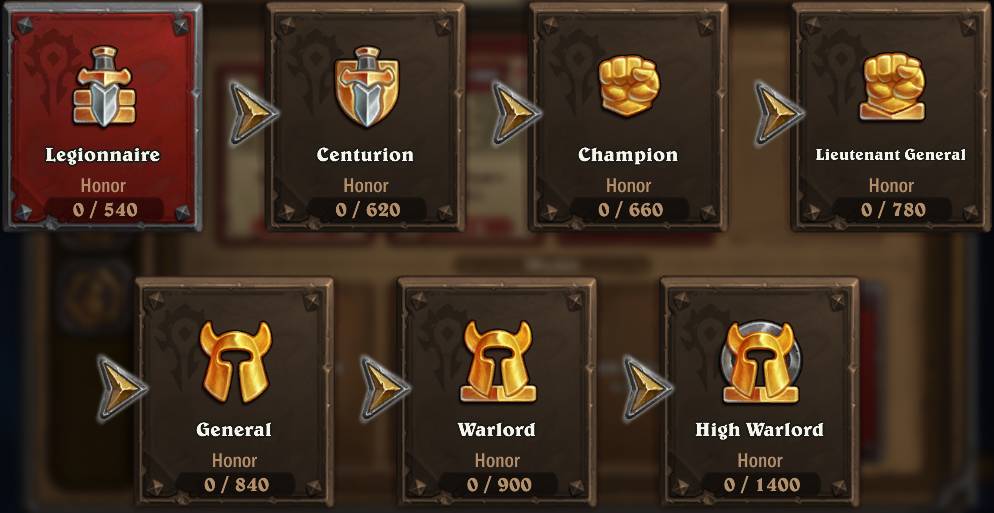 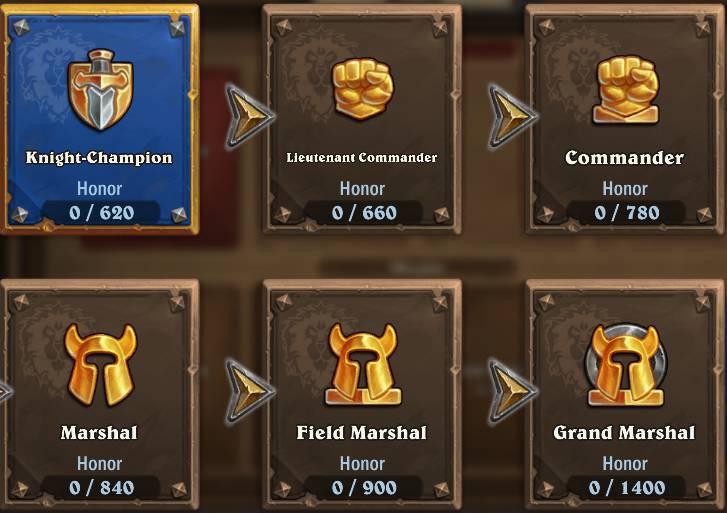 If there is any X factor to be found here, it's in that little detail of the Honor event accidentally coming online too early. The Legendary Questline was fully activated on December 2, but the official period for tallying the Honor gains has seemingly only began on December 7 with the arrival of Fractured in Alterac Valley. The last time we heard, it's something that could still be taken into consideration if it ends up making any difference:

I'm curious, since the blog entry still states the tallying period has supposedly only started on Dec 7, but we've had the "unofficial-then-made-official" launch of Honor Questline on Dec 2 (with Honor gains before that not being counted). Have I missed any clarification on that?

I think it will not matter, but we'll check to make sure. If it does change the results, then we'll decide how to handle it.

In order for this to even matter, it would have to mean the Horde side was somehow far more active in these early pre-expansion days and accumulated millions of extra Honor while the Alliance folks were still warming up. So perhaps that's not very likely, all in all.

There were also questions about what would happen in a hypothetical situation of a tie between the two factions, and whether it could mean getting both Diamond cards. But in reality the chance of something like that happening should be lower than 0.0000001%, and I'm not even convinced that's enough zeros.

What we know we can expect is some proper juicy details once the Battle for Alterac Valley event comes to its natural conclusion:

Will we get a breakdown with detailed stats at the end of it all? That would be amazing to see.

There's a plan to share a bit more once the event is over.

Is there a report showing how many people picked each side? Wold love to see that…

That type of information is going into the final recap.

If you were hopeful all that must surely mean January 11 would be the perfect Tuesday for a brand new big Hearthstone patch, you might be in for some disappointment:

does this mean we get a patch next Tuesday ??

That is not what this means. This date was chosen for another reason and there will be something else to lead up to the next big patch.

And then there is that tease at the end... But we're not going to be trying to pick this message apart here, the Honor grind still awaits while the time is ticking. See you on the battlefield!

Alliance, Horde, or full Neutrality? How well have you been doing with your own Honor scores and ranks so far, is it time to relax or double down on the faction efforts?