The final day of the ongoing Battle for Alterac Valley has come, and it's all official now: after being in the lead for the past few weeks, the Alliance faithful got to solidify their advantage over the Horde followers! If you were following along with this Honor event, it perhaps doesn't come as such a great surprise.

Congratulations to the winning faction of the Battle of Alterac Valley:

For Azeroth. For the Alliance!

This marks the end of the competition that split Hearthstone players into two separate camps based on their choice between Drek'Thar and Vanndar Stormpike, and ran from the very release of Fractured in Alterac Valley on December 7 up until today on January 11 (even though the whole Honor system went online before that). Perhaps now at least some individuals might be able to relax with their unending Honor grind. Expect your Diamond card reward to arrive at a later date! 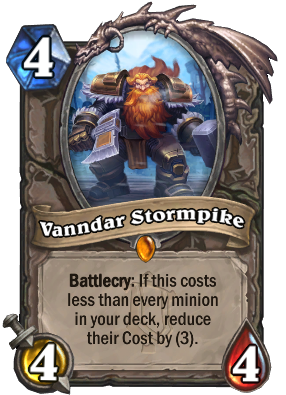 But Where Are My Numbers?

If you were expecting detailed stats, graphs, or any other extra information about the event, it looks like a little more patience is in order:

Congrats to the Alliance! Everyone can look out for a longer form blog post with some more detailed stats, coming within the next week or so.

Perhaps we'll be able to find out how many billions of Honor were collected in total, how many people participated on each side, or which players might've scored the highest amount.

And don't worry if you still have a lot of Honor to collect and many ranks to achieve to reach the end of your Legendary Questline. It is a ton of games needed after all, but there are still good 3 months left to get there at your leisure. Even afterwards, these Golden cards should still be available for completing specific achievements.

The period for tallying the winning faction is from December 7 to January 11, but you can collect Honor to complete your personal Legendary Quest Chain at any point throughout the Fractured in Alterac Valley expansion. After the expansion period, the Legendary Quest Chain will be replaced with another means to earn these rewards.

Are you happy with the Alliance triumph, or too busy mourning for the Horde? What kind of stats from the event would you love to see next week?