Blizzard has provided another update on the Alterac Valley honor winners after they announced that Alliance won earlier this week. Here are the stats Blizzard shared with us:

So what does this all mean? It means the Alliance won and we can expect a Diamond Vanndar Stormpike in everyone's future. Don't forget, if you haven't completed your Legendary Honor Questline yet, you still have until the end of Alterac Valley to finish it. Perhaps you can dive into some Alterac Valley achievement XP while you grind out games, which will also progress your Alterac Valley Rewards Track.

How Many Games of Hearthstone Were Played Over December?

Blizzard let us in on a fun little metric! The Honor event ran from November 30 (December 7 originally) until January 11, or 42 days. During this time, we saw 8.6 Billion Honor earned. Some basic math tells us how many games of Hearthstone were played. First, how Honor was calculated:

If we assume that half the games played are friendly duels (Alliance vs Alliance, or Horde vs Horde) and the other half are battles (Horde vs Alliance), we can do some math and figure out how many games of Hearthstone were played in the time period. First, the numbers that matter:

We said previously that we'd assume half the games were duels, and the other half battles, for an easy lowball estimate. There are plenty of factors that are unknown, so this is a safe estimate for some fun numbers.

215 Million Games Played in almost a month and a half. If the daily games played metric was static, that's 1,872,298,525 games of Hearthstone played in a year.

Again though, this is simply some junk math and is almost certain a lowball estimate. Alliance players almost certainly saw more games played against themselves since they had a much larger pool of players overall. We also don't know the distribution of factions, was it even in all ranks? Considering Horde players had higher overall winrates, one could assume that Alliance had a larger chunk of players at the lower end of the ladder which is where the majority of players are. There's more, but that's okay, we're just having some fun!

There's a couple of other fun things we can do with that number.

How Much Data Does HSReplay.net Collect From Hearthstone?

If we look at HSReplay.net's Live Data on their homepage, we saw 10.7 Million games logged from the past week, or roughly 1.5 million games a day, which is 63 Million games in a 42 day period. That's a lot of games.

Plugging in our lowball estimate of 215 Million games played, one can roughly say that HSReplay is logging 29% of Hearthstone games being played. The real number is going to be lower, but it does showcase the power of how much data they are logging. They may not have the full picture like Blizzard, but it is a damn good one.

Blizzard MAUs, How Many Hearthstone Players Logged in for Alterac Valley?

Hearthstone had 23.5 Million active players back during the Year of the Phoenix.

We know that Hearthstone may have had a small bump in players during the Year of the Gryphon - or they just got better at making more money from the existing players.

Blizzard as a whole has seen a downward trend over the past few years in their overall Monthly Active Users (MAUs), though it is unknown how that relates to Hearthstone. World of Warcraft is likely the largest contributor in the last couple of years, with community sentiment surrounding the game not being great and there have been several high-profile players that moved over to the Final Fantasy MMO when Shadowlands was no longer fun. The large boosts in prior years can almost certainly be attributed to good World of Warcraft content (Legion), Hearthstone being in its prime, and Overwatch's late 2016 release. I can tell you that HearthPwn, the site I previously worked on, had it's highest recorded numbers in 2016 and 2017; A trend which Hearthstone as a whole shared. 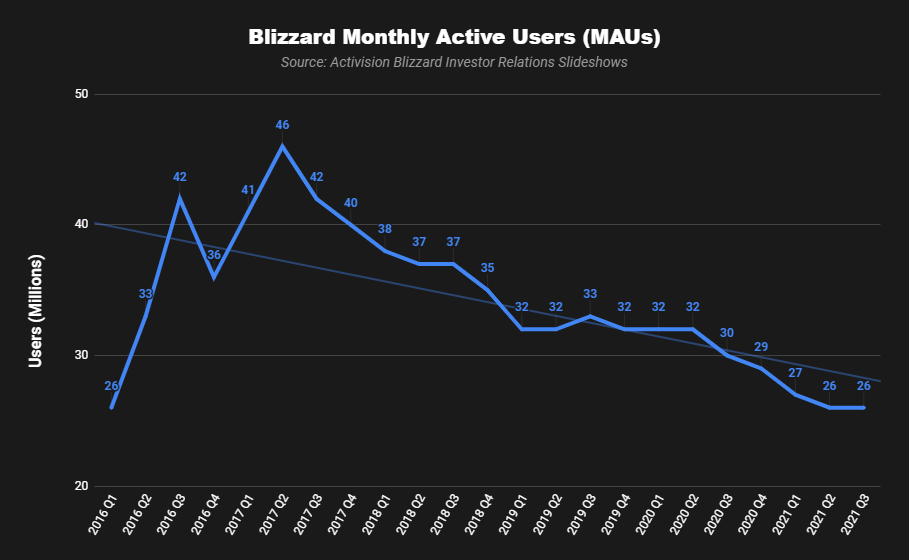 How can we plugin Blizzard's overall numbers into all this? Well, we can't really because unfortunately, the MAUs that are published in their earnings calls each quarter are calculated in a messy way.

So, yeah, if you played World of Warcraft and you played Hearthstone, you are "an individual who accesses two of our games" and thus were counted as two Monthly Active Users. Luckily on the Blizzard side of things, the numbers are slightly more accurate than Activision's numbers because if you play Hearthstone on mobile and on desktop, you are only counted as one user whereas due to a technical limitation, Activision and King MAUs are inflated when players access the same game on multiple platforms or devices.

So, we can't even guess at how popular Hearthstone is within the entire piece of the Blizzard pie.

If we wanted to just have some fun though, it takes 7200 Honor to complete the full questline. With 8.6 Billion honor, we know that it would take 1,196,903 players completing the questline to reach that number. Therefore, we can assume that there are at least 1.1 Million active Hearthstone players within the 42 day period - though the number is almost certainly many times more. HSReplay.net, which we referenced above, has 369,616 unique contributors over the past week, which is 30.8% of our 1.1 Million players, lowball estimate. Quite close to that 29% from before!

Hearthstone isn't dying, it is in a comfortable spot after it's peak popularity and unlike other games in the genre, we don't need to merge servers just to find a variety of players to queue against. Plus, over 100 Million people have played Hearthstone in total, so seeing almost a quarter of those make a return at least once during the Year of the Phoenix to experience the hell that was Demon Hunters, that's kinda cool.

The Battle for Alterac Valley is over and the Alliance has claimed victory! In celebration of their feat, all players will receive a Diamond copy of the Alliance leader, Vanndar Stormpike, at some point in the next major patch period!

But the question Horde players keep asking themselves is, how did it come to this? 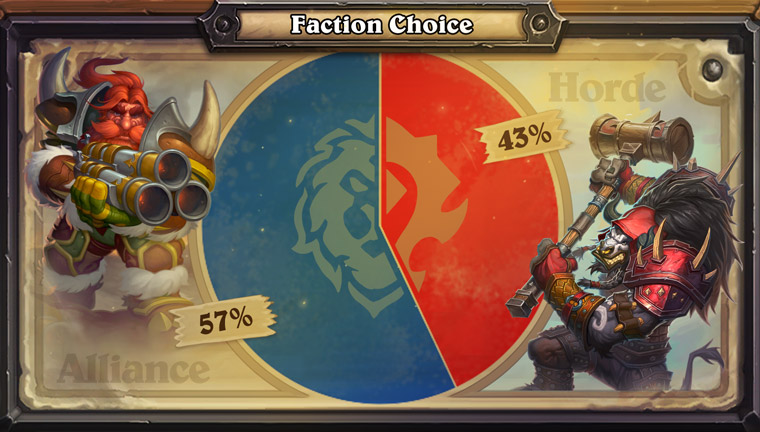 After the first day of the new expansion, both sides grew significantly, but the Alliance grew a little faster, so that they controlled about 58% of the playerbase, and grew their lead to well over 100 million Honor!

Throughout the event, the general trends were the same across all four regions: more Alliance players than Horde players, resulting in about 20-25% more Honor for the Alliance in each region at any given time. Of the regions, Americas was the most Alliance-favored, while the APAC was the region where the Horde was closest to matching the Alliance’s numbers. The China region was the largest in terms of players and Honor for both factions, followed by EU, Americas, and then APAC.

Over the course of the event, the Horde lost their advantage in number of games played per member, but continued to get more Honor per game. This meant that the average Horde player earned very slightly more Honor overall than the average Alliance player. However, with more members and more games per member, the Alliance were unstoppable. By the time the event was over, the Alliance had earned about 4.7 billion Honor to the Horde’s 3.9 billion, for a grand total of over 8.6 billion Honor for all players! 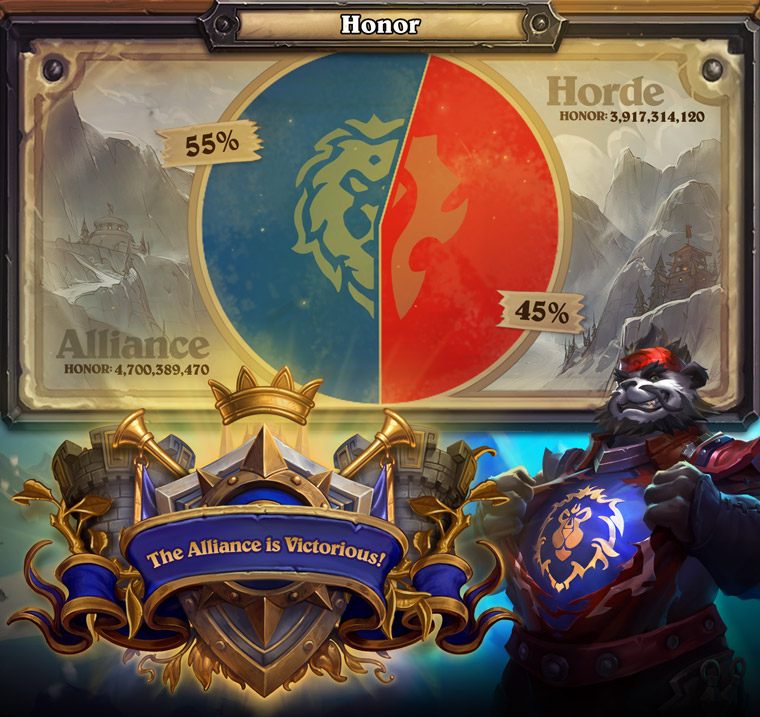 But remember, if you didn’t finish your Honor track, you still have until the end of this expansion cycle to get a Golden copy of the enemy faction’s leader through this quest chain. So keep fighting, noble warriors, for even though the Battle for Alterac Valley is over, you can still fight for honor and faction pride!

CONGRATS TO THE ALLIANCE ON A HARD-FOUGHT VICTORY!