Hearthstone just saw its first big content update of the year, and you know what that means (besides being able to enjoy all these lovely new game additions, of course): unfortunate smaller or larger bugs making it through. We've already noticed dozens of reports about various issues for pretty much all game modes out there, with a few of them finding quick fixes or at least potential workarounds.

As has become a recurring theme by now, an official forum thread was also established for cataloguing all known problems and subsequent solutions over the coming days and weeks of the patch 22.2's lifespan. If you encounter anything that might warrant a report and hasn't been already confirmed as a 'known issue', this is the place to go! On top of that, some Twitter users had even more to add to the ongoing 'bughunt', with people from the Hearthstone team chiming in as much as possible.

Here is our current extensive list of both 'official' and 'unofficial' sightings, with further clarifications where it might be warranted:

The usual, although this time around it took a really long time for all devices to receive the deployed patch. If this solution doesn't do anything for you, make sure to clear the data, restart your device, try different network connections (sometimes the Airplane mode --> WiFi just... goes through), and if all else fails - be ready to reinstall.

This seems to be largely contained only to 1k win portraits. Separately, we've seen reports of Warrior class wins showing lower numbers than before, which might have something to do with Diablo and the Duels change in which relevant achievements became hero-specific rather than class-specific.

Not listed in the official forum thread but confirmed on Twitter, some players have also lost access to their Battlegrounds skins from the current Alterac Valley Rewards Track.

This is a big one, but there seem to be at least two different issues at play here. It's not just with the runs that were started beforehand, we've been hearing from a lot of people getting stuck only after they had a chance to play in the current patch. This could be linked to the new hero Drek'Thar. You'll know something is up if your Play/Resume button becomes grayed out and refuses to let you through, regardless of restarting the game. 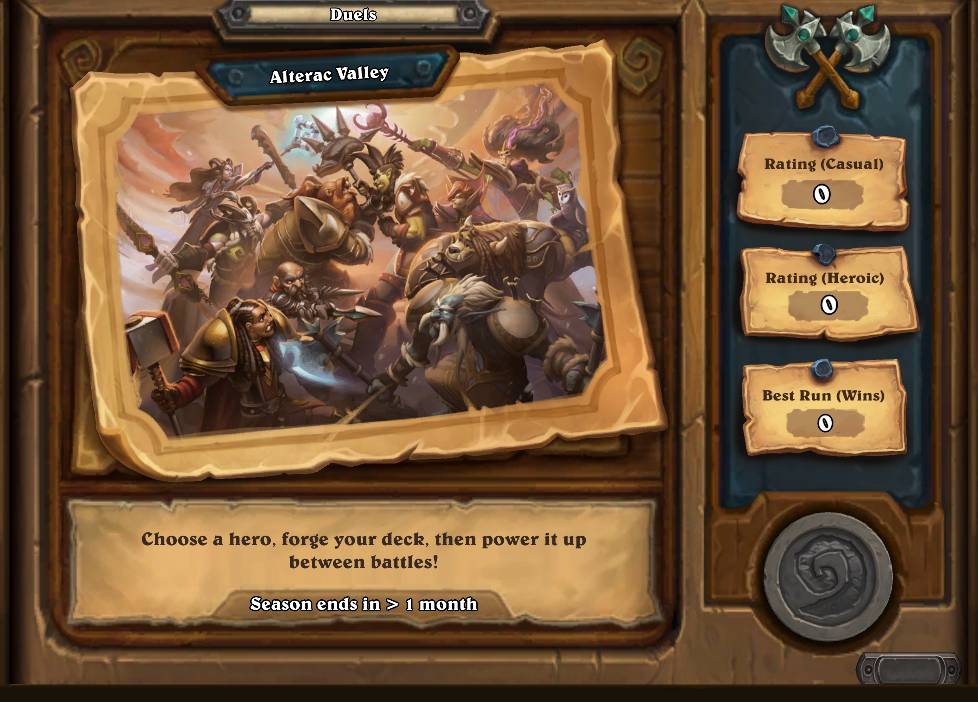 But take comfort, there might be a potential workaround! Thanks to a few resourceful users on Twitter, we've learned the following:

I managed to fix it by using mobile and tapping where the glowing handle would usually be to redeem rewards, seems the button is there just visually broken

I opened the client on my IOS phone and tried tapping on where the vault lever usually is on the rewards and it worked on opening the rewards vault and fixing the bug.

Try this solution if it happens to you (does help if you have access to Hearthstone on another device), meanwhile the developers are aware and will be working on an official fix.

A few other Duels-related problems:

So yes, you might see your Health remain at 20 points in the 2nd game (whereas it should be increased to 25 HP), and so on. The scaling seems to be outdated for the time being.

One more bug not mentioned in the official thread yet: it's possible to stumble onto duplicate choices when being offered Pool 2 Treasures - so you end up having only two options to pick from rather than the usual three.

And one that was already fixed:

What bug, you might ask? Apparently Heavy Armor wasn't setting one's Health to 10.

Somewhat confusing if you attempt to make use of the newest building addition to the Mercenaries mode (not that it's particularly worth it, other than for silly cute animations).

I don't really have the first few Mercenaries on that list (crafted, that is). Fortunately, it doesn't seem like full client restart is always necessary to fix this. I was able to simply exit the mode and upon entering again everything was 'unstuck'. But we've also seen reports of people's game clients crashing as a result.

Just mind that Tasks 7 no longer provide equipment for Mercenaries added in the patch 22.2, you will have to complete the new Heroic Bounties for that (with relevant character in the party). Mysterious Stranger crashes were mainly related to encounters in the new Alterac Valley zone (although we've heard mentions of problematic Felwood bounties and the like as well).

As far as good news go, rejoice! At least some of the more grindy tasks have had their requirements lowered (and others yet received further text clarifications). We don't necessarily have a full list as it's only 'been unofficial' compilations from eagle-eyed players (via Mercenaries Discord), but for example Cookie, the Cook and Sylvanas Windrunner won't attempt to torture us as much anymore.

The leaderboard issue only affects the most competitive subsection of players, and has occurred with almost every season so far. Alas. Basically playing a game in the new season/patch means the ratings correctly reset to 0 afterwards but the previous rating record is not being properly recorded for posterity.

We've also seen quite a few reports of various other Battlegrounds bugs not currently listed in the official thread, but acknowledged by Game Designer Dominic Calkosz on Twitter:

I assume the infinite Money thing on Zephyris is know and lead to him being disabled?

It is known. With the next hotfix, Zephrys' hero power won't be offered to Finley.

There are probably more Buddy bugs hiding out there, you know where to send them should you encounter any!

Sorry, achievement hunters. Not just yet.

Wildheart Guff is supposedly a nice guy, but still refused to play along with his alternate bear self of Guff the Tough (or more specifically, Lost in the Park progress ticks). There are currently plans to fix the bug in all other modes and formats with another hotfix (possibly happening later today).

Whew, that's a lot. And it might not be absolutely everything of note. Let us know should you find anything else worth mentioning; also report in the official forum thread if you are able!