We've known it's coming ever since the first peek at the published 22.4 patch notes - and now that day is here. Chi-Ji has entered the Mercenaries game mode! Except, the "here" in this case was dependent on your Hearthstone region(-s) of choice, as the special event seems to be closely tied to 'server resets' for each of the respective timezones: meaning it first went live on Asia, then it was Europe's turn, with Americas having to wait the longest. In the end, everyone will be given the same amount of time to complete these tasks.

We've also been updating the text accordingly as new information comes to light. Using Ctrl+F function to scan for all recent "Updates" is one way to stay up to date. Plus all the useful comments below! 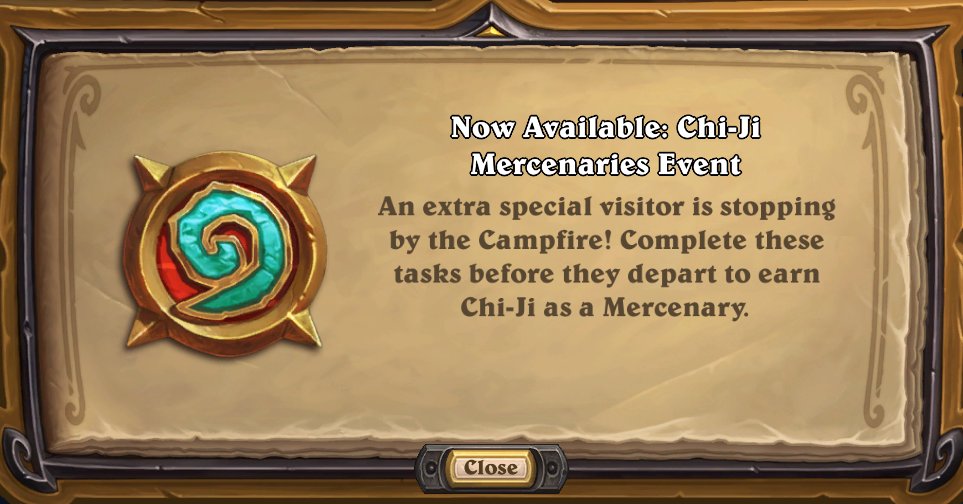 That's already different from how other Hearthstone specials have worked in the past, with simultaneous activation at a specific time for Quest journals everywhere. But Mercenaries clearly follows its own set of rules, and it's the first-ever event of this type tailored specifically for the game mode. Makes sense it remains self-contained per region; which also shows what we might expect going forward.

It's also arguably the first Hearthstone event that isn't going to be as easily accessible for all players. If you haven't been playing Mercenaries on a semi-regular basis, it could very well turn out that your underlings aren't quite up to the challenge. That's pretty much intended by design, although it's not difficult to imagine not everyone is going to be happy to learn about such hurdles the hard way.

While the 22.4 patch notes only gave us a fairly vague warning and reasonably small amount of information to go with it, that was at least enough for some kind of preparation. With 4 new Mercenaries and 4 new Bounties joining the fray just over a week ago, most players couldn't be expected to have their Niuzao, Xuen, Yu'lon, or Long'xin primed and ready for the expected fights. It's a lot of coins and tasks to worry about, after all. Luckily, we should still be able to get things done without relying on this newest bunch of recruits.

Besides the official description, we've only really heard a little about the Hearthstone team's reasoning behind this event:

I haven’t seen anyone highlighting this tip for the upcoming mercs event, so I wanted to make sure everyone saw it. From talks with the dev team, this event seems aimed at giving established players something new, not a “anyone can jump in once it’s live and just do it” thing.

If you need a quick refresher as we dive in further:

Update: It turns out the patch notes didn't tell us the whole truth - the plans might have changed, or the live implementation somehow didn't quite go as planned. As a result, all 10 Tasks became available straight from Day 1, instead of unlocking gradually as laid out by the initial description. And so the rush to completion began!

Now, if you are averse to any potential spoilers or wish to learn everything at your own pace, your best bet would be to skip this following section. Following along with Chi-Ji in-game should eventually show you everything there is to the event.

For anyone else thirsty for some extra knowledge, it's worth noting that the list of tasks for this event has first appeared on the web more than a week ago. If you frequent these other places, you might've seen early mentions of it on the Mercenaries Discord or Reddit. In this case, the credit goes to Use25 posting this (and some more datamined information from the patch) on the Hearthstone Wiki.

Update: Since then we've had more than enough time to compare that data with all the tasks available on the live servers; being able to confirm that all presented values and the order of quests are exactly as shown here: 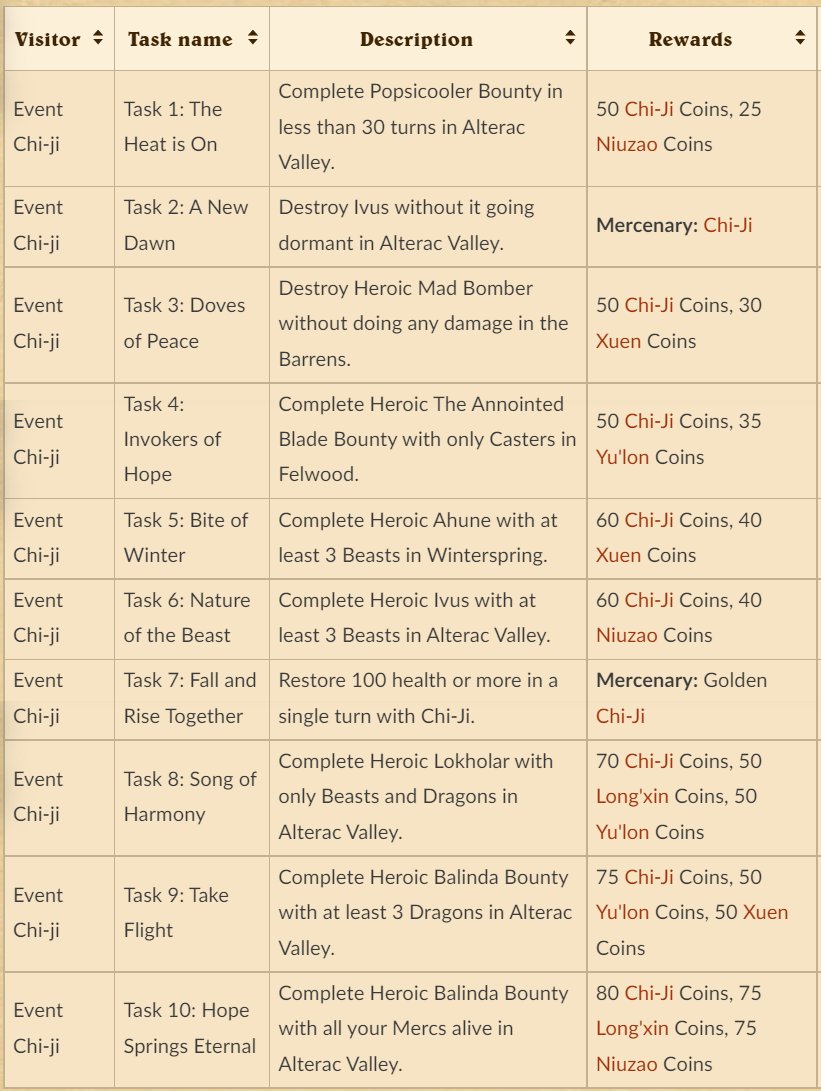 So yeah... that was always going to take quite some effort. Especially if your Beasts and Dragons aren't quite up to scratch (it's a good thing Heroic Lokholar saw its difficulty lowered). At least even the less dedicated players might be able to get their hands on Chi-Ji and finish a few of the early tasks; before having to grit their teeth while dealing with potentially frustrating encounters later on.

Not all challenges might be as difficult as they seem at a glance: there are usually tips and tricks to be found to make everyone's lives easier. The only requirements that cannot be really circumvented have to do with owning enough Beasts and Dragons, and ideally having at least some of their abilities or equipment properly developed.

Update: With everything going live all at once, we've been getting reports of some pesky bugs finding their way into the event as well. Luckily, determined players were quick to test everything for possible workarounds. Tasks 4 and 8 especially made many an individual's blood boil, as picking up Class Boons (Protector, Fighter, or Caster) along the way or any of the Bombs (Hot Potato!) from Random Encounter tiles would trigger a bug and prevent completion.

But that should be an issue no more! The Hearthstone team needed a few days to save everyone not in the know from numerous restarts and having to retry these fights while being at a disadvantage:

That should certainly be a relief to anyone who might've been stuck on these tasks, or has yet to try. Hopefully there aren't any other hidden problems persisting (such as non-Beast summons interfering with the completion requirements).

Now, as for the rest of them: Tasks 5 and 6 can still be a little quirky. You can use non-Beast comps for the fights and have your 3 Beasts sitting safely on the bench, but you should make sure that you don't lose any to normal encounters on your climb to the Bosses. The final combat seems to scan for your Beasts being alive or not as you begin. Having any of them die during the last fight itself should still allow for the task progress to count.

Also, picking certain treasures along the way (such as Hunting Party 1 against Ahune the Frostlord bounty) can go a long way for your success rate. While Tasks 9 and 10 (dealing with Heroic Balinda Stonehearth) tend to become easier with a strong Holy comp.

Chi-Ji Task chain also replaces the Daily "Complete 2 Bounties" Toki slot for the duration - which, for the min-maxers out there, was reason enough to try to 'speed run' through the special event in hopes of getting access to their 2x25 Coins source again.

Update: But as it turns out, we're not going to see Toki return for a little while longer:

Confirmed with dev that it's intended for this first one. Maybe design can speak more on "why," but my guess is the intent was this goal of "shaking up" how Toki works by replacing her with this alternative.

If you remember the whole "What's Next for Hearthstone Mercenaries" from almost 4 months ago, that's where the team first hinted at exploring various alternatives to Toki's daily task. This seems to be merely the beginning.

Best get used to seeing that second icon if you've finished the Chi-Ji task chain.

As you can see, there is no real reason to hurry - nothing lost, nothing gained by doing so. You can take your time and aim to finish the event at a more relaxed pace. The extra days (and perhaps the added rating rewards from the coming new PvP season in March) could be just what your Beasts and Dragons need in order to catch up.

It also sounds like the Mercenaries team is gathering feedback as they go, and we might get to experience another such special event even sooner than we might've thought:

That said, we've heard the feedback on some rough edges with this event and the team is specifically looking to incorporate feedback to improve future events (maybe not a ton of changes for the next one, since it is very far along at this point, but going forward).

Sounds like we're going to see a lot more variety in our mercenary future. Regardless of the current difficulty woes and perhaps raising this initial entry bar a little too high for casual players, it's definitely the right idea to keep the PvE component of the game lively and sufficiently challenging. Revisting former Bounties from all the new angles is bound to prove inherently more interesting than just grinding the same old places over and over again.

Chi-Ji completes the ranks of the August Celestials, next to Niuzao, Xuen, and Yu'lon. These are four powerful beings hailing from the mystical land of Pandaria (World of Warcraft had an entire expansion devoted to the continent at one point - that's pretty much where all these rumors about the Monk class originate from). With this particular angle and a recent set of portrait bundles, Hearthstone has certainly had a little unofficial theme going on. We'll have to see whether such sneaky teasing eventually takes us anywhere.

The Red Crane proves to be sufficiently fiery: 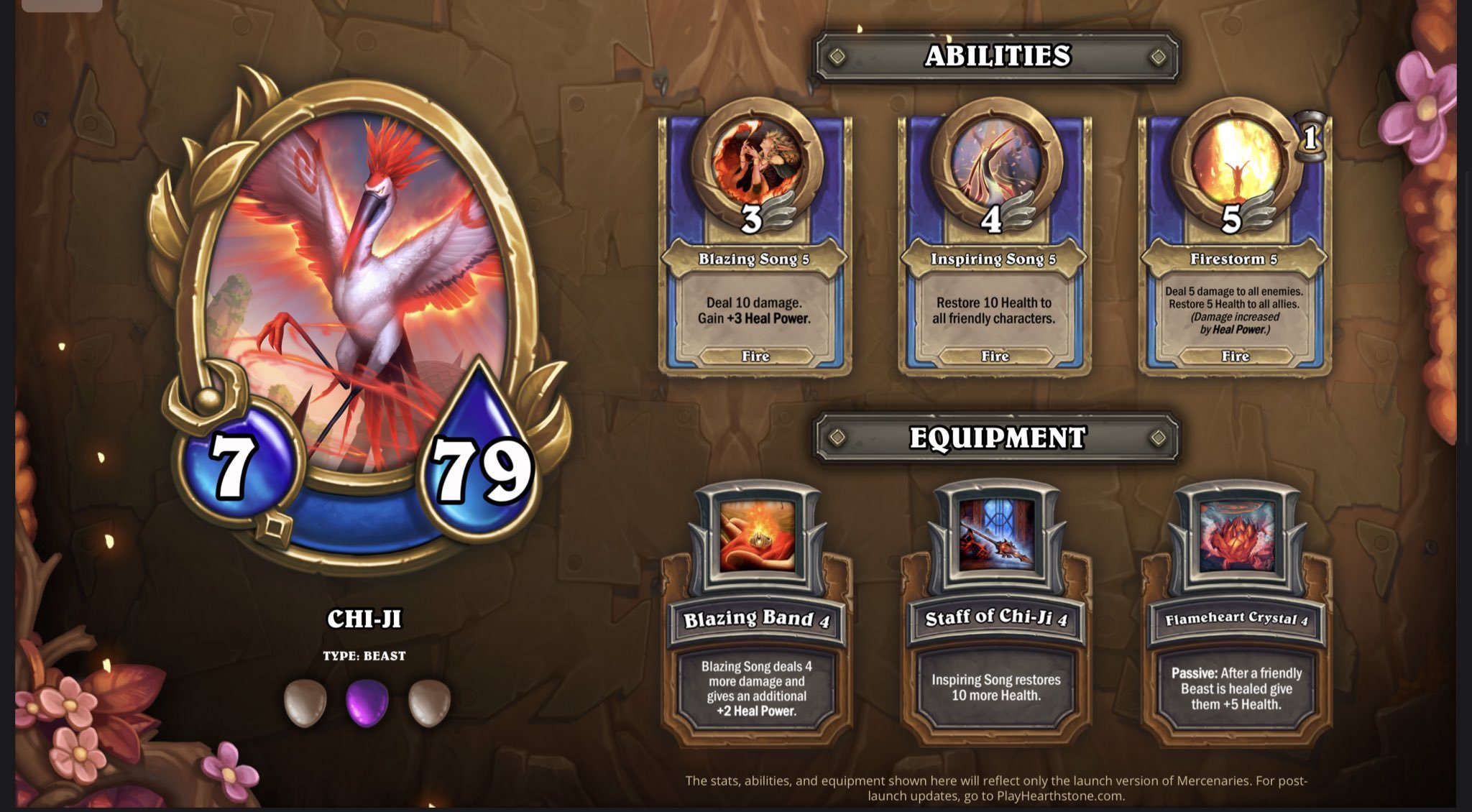 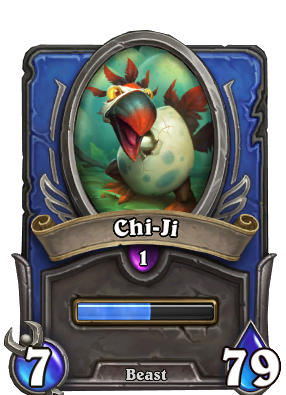 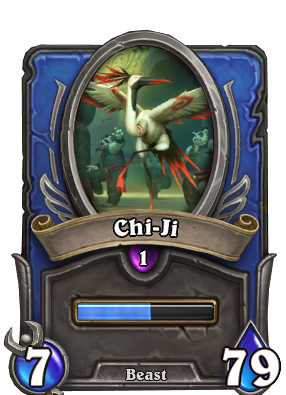 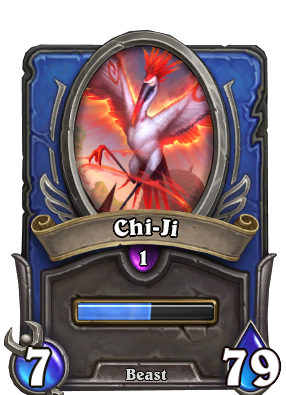 Players who miss out on or skip the event altogether will still have their chance to acquire this Mercenary, just at a later date:

Chi-Ji will be earned exclusively through the Chi-Ji event until it is made available through the normal means of acquiring Mercenaries in the next major patch after the event is over.

Does that also indirectly tell us to expect the next major Patch 22.6 on March 8? The timing would be just about right. We also know that a couple of bugfixes are scheduled to take place only by then.

Also remember, the remaining two Alterac Valley Bounties are set to arrive around that time as well: 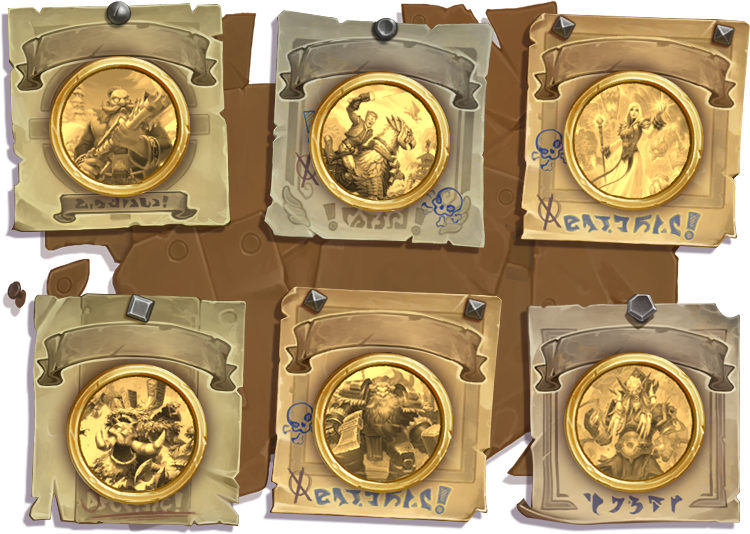 The Vanndar Stormpike and Kazakus Bounties will be added to the game after the conclusion of the Chi-Ji event.

We will look into compiling a more detailed walkthrough for the special event Tasks over the coming week - there are a lot of Mercenaries and potential strategies available to explore! Aside from the most hardcore players with very advanced (if not already maxed) Mercenaries collections, the rest of us will have to make do with whatever we got up until this point. And so everyone's experiences might be slightly different.

Meanwhile, feel free to discuss any and all tips and tricks with fellow members here in the comments section, on our forums, or the Out of Cards #Mercenaries Discord channel. There is also a reliable subreddit for the game mode with its associated active Discord, if you are looking for a particularly dedicated crowd of players.