Gallon has confirmed on Twitter that Unstable Evolution will be changed to feature the Echo keyword instead of "Repeatable this turn" when Voyage to the Sunken City goes live.

This is particularly important due to its interaction with Radiance of Azshara. In its current form, Radiance of Azshara would allow Unstable Evolution to cost 0 allowing it to be infinitely played (as Unstable Evolution doesn't actually use Echo and therefore doesn't abide to the rule that Echo cards can't cost less than 1). This was previously possible if you ended up getting a few specific cards from another class in your hand, but as the two cards are both Shaman cards, you could put them both in the same deck, making the interaction consistent. 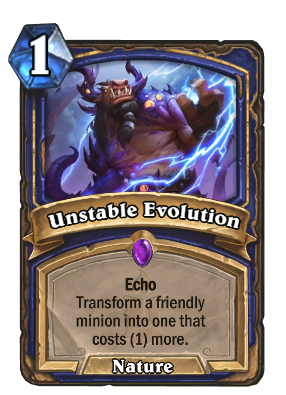 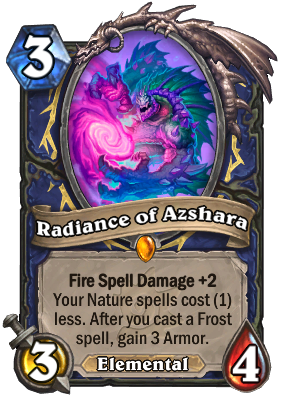 It was also confirmed that as a result of this, players could disenchant the card for its full dust value for a period of time (no specific end date was specified).

When Voyage to the Sunken City goes live, Unstable Evolution will have its functionality changed from a “Repeatable this Turn” card to an “Echo” card. The wording will update in a follow-up patch. While they function mostly the same, we apologize for it being unclearly worded for a short period of time. We also understand that the fun part of this card is to randomly generate a Radiant Elemental and have a crazy turn, so even though this now will work with Mistwraith it’s still effectively a nerf to the fun, so there will be full refunds on Unstable.