They also anounced a streamer contest that will reward packs to anyone who participates. It's called the Battlegrounds Brawl and features some of Hearthstone's favorite streamers. I voted for team Mega Fins, I'm a big fan of Dog, join me for the best rewards!

For the uninitiated, Hearthstone Battlegrounds is a new game mode based on Dota 2's Auto Chess and League of Legend's Teamfight Tactics (TFT). Auto Chess released last January and quickly became the most popular new game that month and through the spring (it was originally created as an incredibly awesome mod for Dota 2).

Like most nerds, I'm a big Star Wars fan. Auto Chess, to me, is the current-day equivalent of the game in the Millenium Falcon that Chewbacca plays terribly. You have a number of creatures that you collect and upgrade to build your army that fights against your opponents. This game genre is best-likened to a deck-building game. You are given options of creatures/minions/cards to collect, if you get 3-of-a-kind, you get a reward. You can upgrade your shop, character level, and in Auto Chess and TFT there are items you can give to your small army.

Hearthstone Battlegrounds is the card or deck game equivalent of Fortnite and other Battle Royales. You play against 7 other opponents to become the last person standing. There are two phases: a Recruit phase and a Combat phase. During the Recruit phase you can manage your army. During the Combat phase you are paired against another opponent (I'm not sure exactly how pairing works, but it doesn't seem completely random). After each Combat phase, the winner gets to deal damage to the enemy Hero based on the board state remaining and their Tavern Tier. Received damage carries over to next Combat phase against another opponent. Once you lose all your Health, you are out of the game. Last player standing wins!

Unlike my idol, Chewbacca, I managed to pick this game up rather quickly and really came into my own with Battlegrounds. As I write this, I currently sit at rank 169 in NA, attempting to climb even further. I'm quite proud to have my name displayed on the Official Hearthstone Leaderboards. #humblebrag 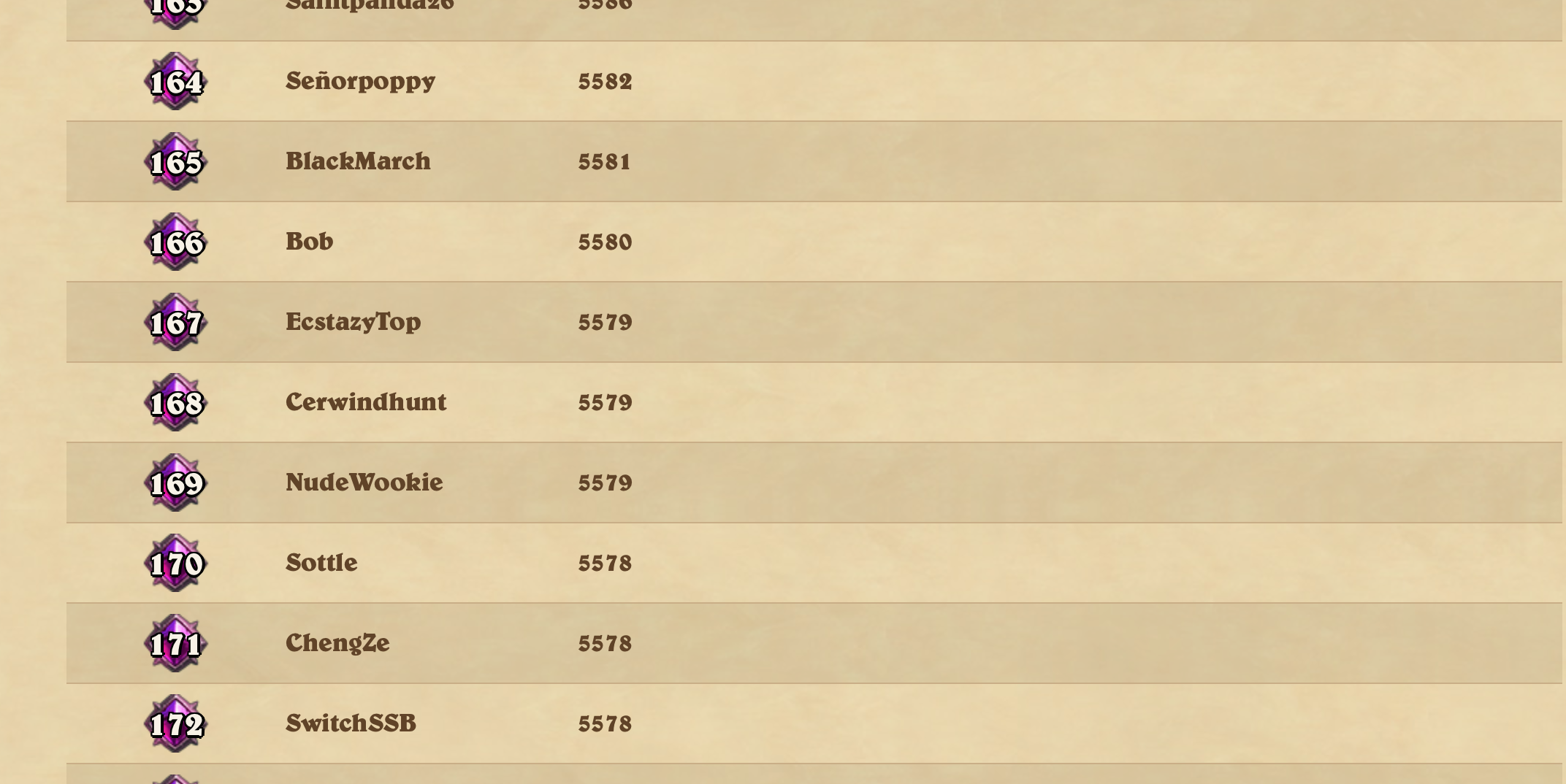 My goal over this series of articles is to teach and instruct on how to play Battlegrounds effectively and to initiate those of you new to this style of game. Today's article will give you a full run-down of the format and overall goals throughout a game. Future articles I have planned will detail Turn-by-Turn Strategy and Win Conditions.

One of my favorite parts of Battlegrounds is the ability to select your Hero at the start of the game. You are given 2 choices, unless you have purchased at least 20 Descent of Dragons packs, then you get 3 choices. Sadly, people without pre-orders will have to wait until December 10 to be able to buy DoD packs with gold and get this bonus as well :( There are a lot of different tier lists circulating on Reddit and the interwebs, so I won't take up space with that. Here is a good one.

All of the Heroes are capable of wining games in my opinion, but some are more consistent than others. Heroes break down into a few different categories: Recruit phase buffs, gold cheating, Tavern Tier cheating, enemy board effects, and a miscelaneous category. I highly recommend trying out all the Heroes over time and different builds, that's the most fun and also gives you an idea about each Hero's playstyle. If you play enough games, you'll start to notice roughly 5-8 repeating Heroes every other game. If you see a Hero a lot, odds are that it's top tier.

Here are some of the ones I believe are the most powerful at the moment: 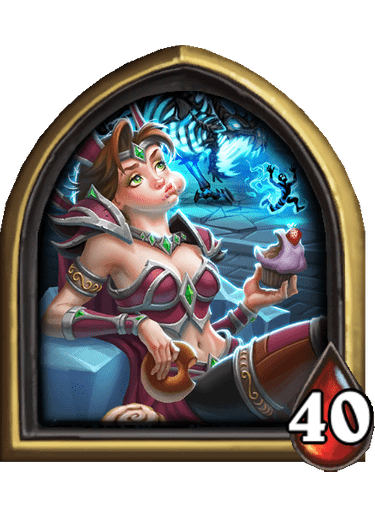 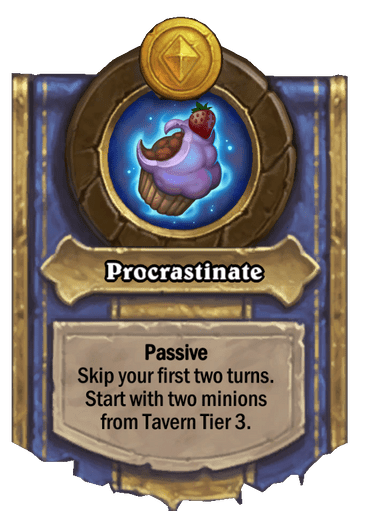 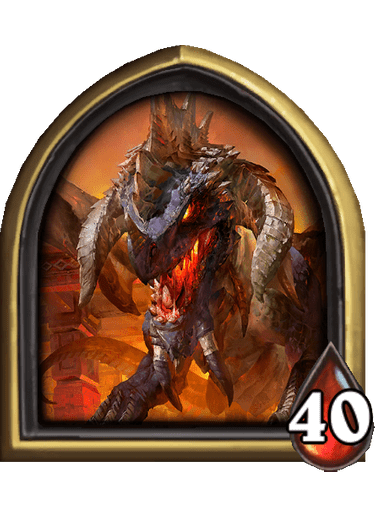 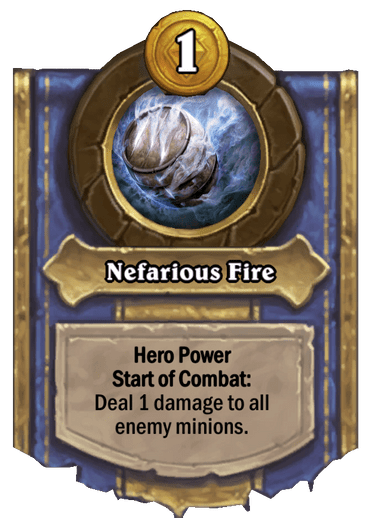 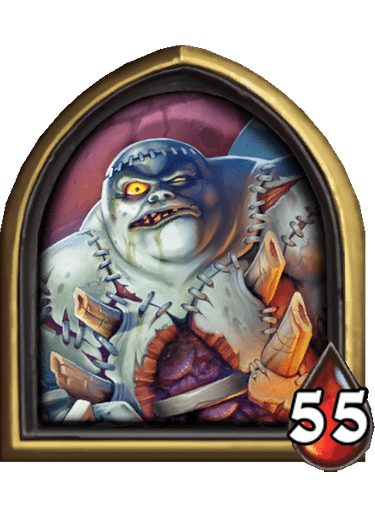 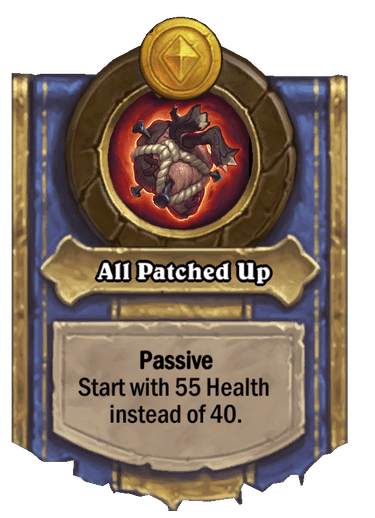 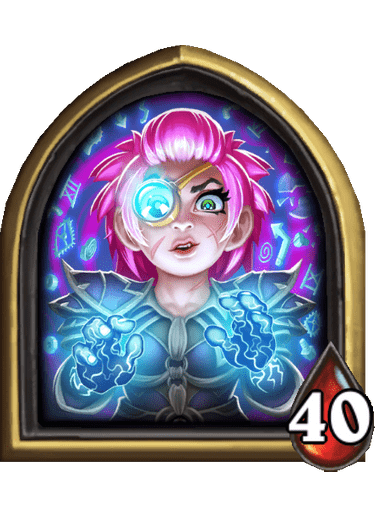 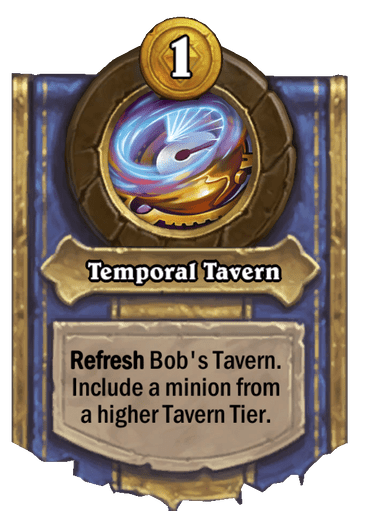 The game starts with choosing your Hero and then drops you into a familiar setting: Bob's Tavern. Bob's Tavern serves the purpose of your Recruit phase of the game. You will see minions for sale in front of you. Every minion costs 3 gold. And just like with Mana in regular Hearthstone game, you get 1 more gold per turn each turn. Another similarity, you cannot "save up" gold for future purchases, at least not via regular means.

You have 3 buttons at the top:

Your Tavern Tier is displayed left of Bob. Bob offers random minions at or below your Tavern Tier which caps at 6. Along with the Tier of minions, the number of them offered changes too. You get 3 minion choices at tavern level 1, 4 at level 2 and 3, 5 at level 4 and 6 at level 6. 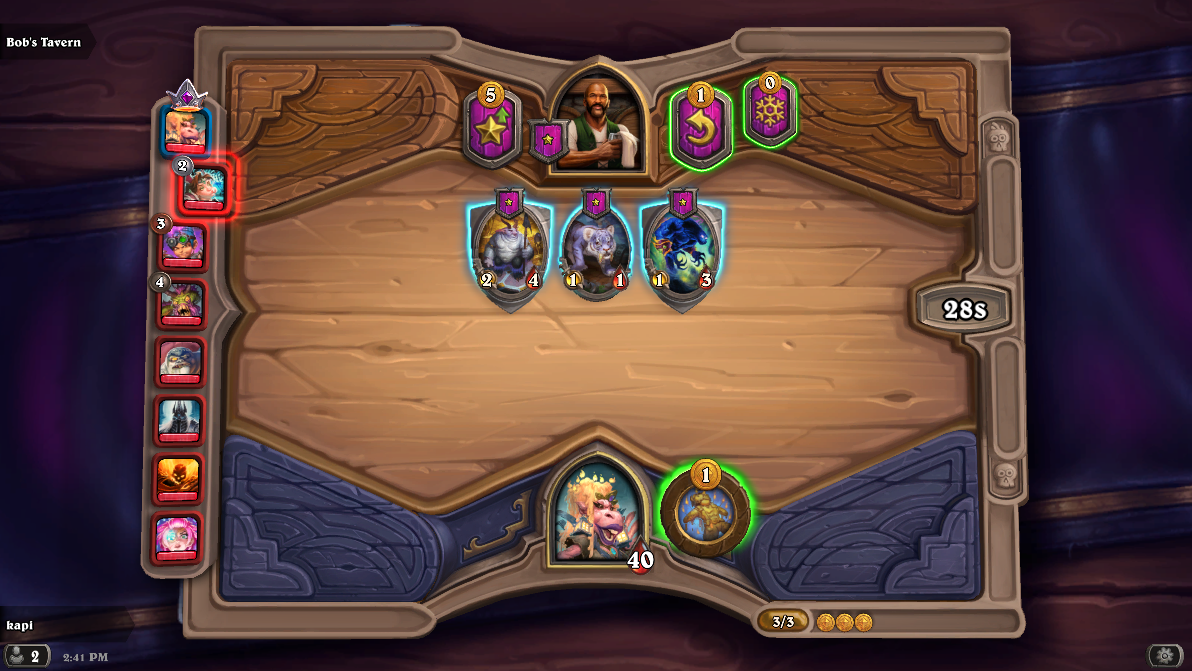 On the left side of screen are all of your opponents and their Health totals: if you mouse over them you will see their Tavern Tiers represented as stars, upgraded minions (3 cards with a blue arrow), and win streaks (flame with number). Your next opponent will be indicated by having their portrait slightly dislodged to the side from the tab. Keep an eye on who you fight next, it can give you an advantage! Maybe you already fought this person before and you remember the kind of minions they had. Set up your board accordingly!

Now that you've learned the basics, lets discuss some of the rules and expectations of Bob's Tavern. Like I said, each minion costs 3 gold. You can sell any minion back for 1 gold, including tokens summoned by Battlecries. To upgrade your Tavern, you need to pay for it. Each turn, the cost of an upgrade to next Tavern Tier decreases by 1, so choosing the best time to upgrade is important.

My general advice is to upgrade whenever you can without taking tons of damage, but be sure to evaluate your next opponent before deciding. Rerolling minions is important, but typically you don't want to do this too often until you are at 10 gold and building a cohesive strategy.

You can only have 7 minions on the board at a time, I recommend focusing on boards of 6 minions, dedicating one slot to cycle Battlecry buffs. This will let you always be able to sell one minion without losing much because you want to find upgrades as the game goes on to scale your team's stats and effects.

The final 7 minions on your team, if you survive to the end of the game, should all be useful. 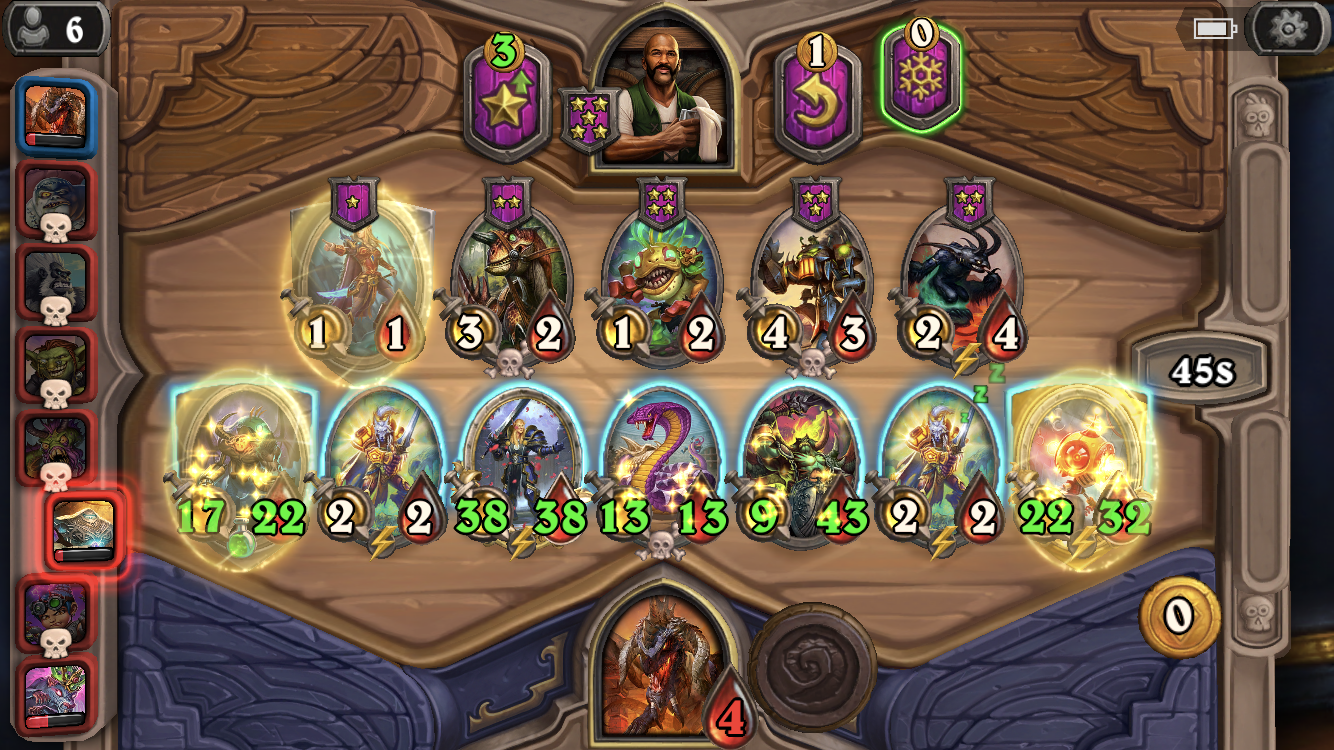 Collecting 3 same minions (on board or in hand) is super important in the mid to late-game. Any time you purchase the final minion to make 3-of-a-kind, they combine in your hand into a single minion with double base stats of the original which also keeps any buffs from all 3 original copies. 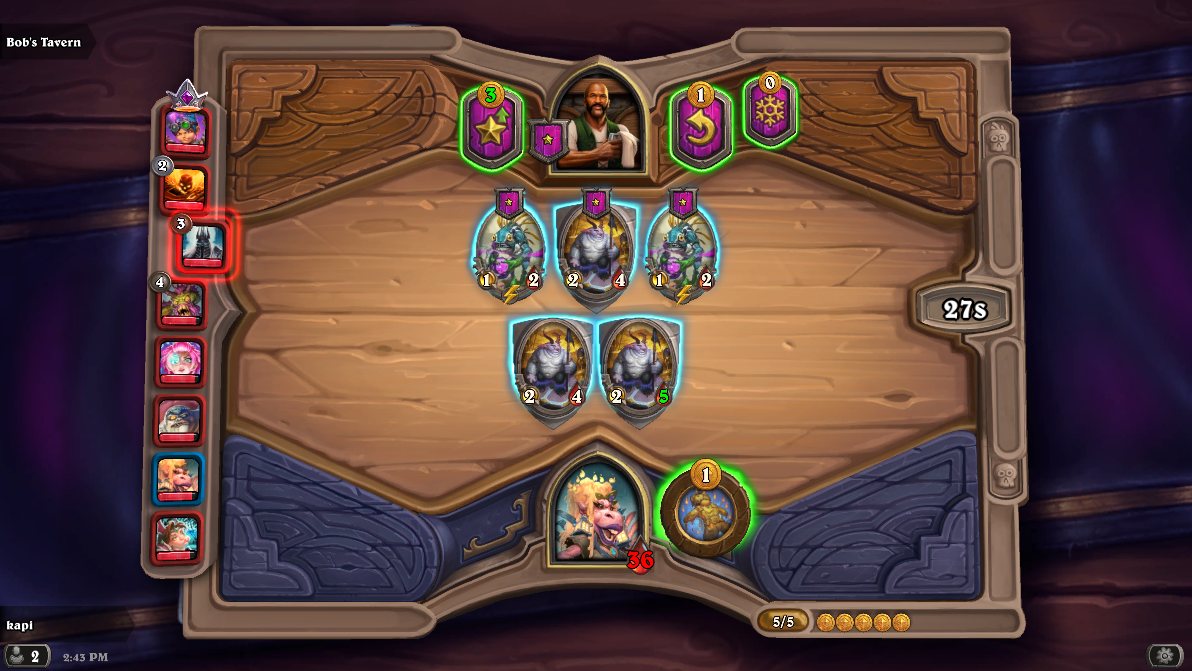 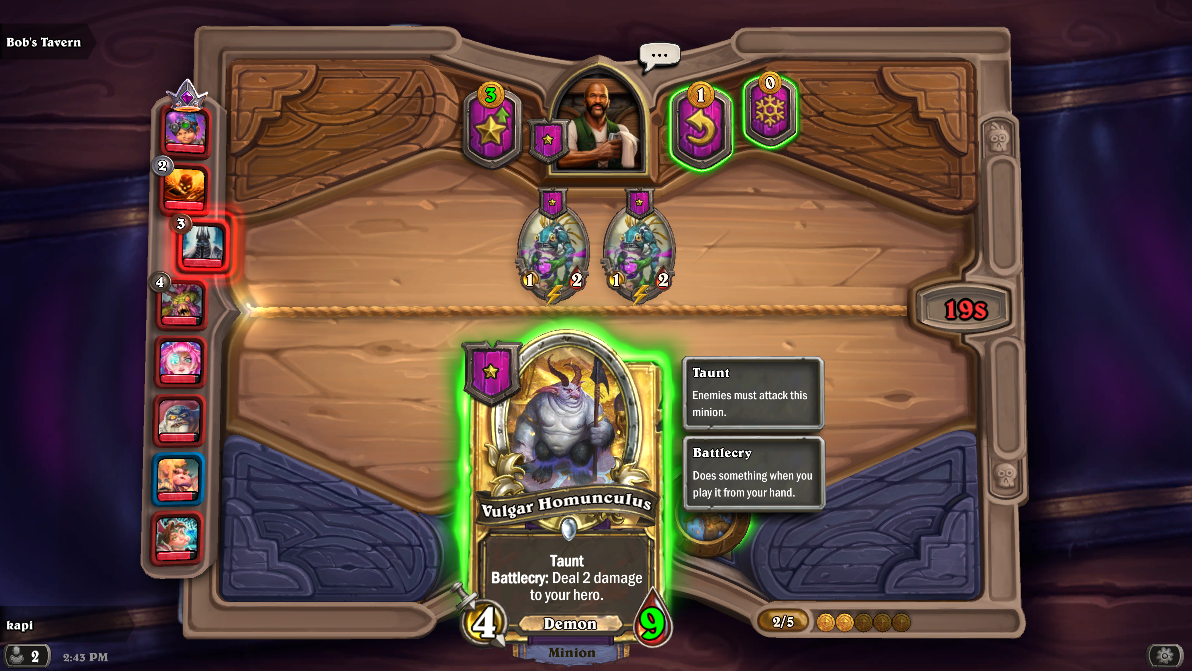 When this, now upgraded, minion is played you will be given a card to discover a minion one level above your current Tavern Tier. So make sure that you upgrade your Tavern as much as possible prior to playing this minion, it can cheat out a huge power boost to your team. 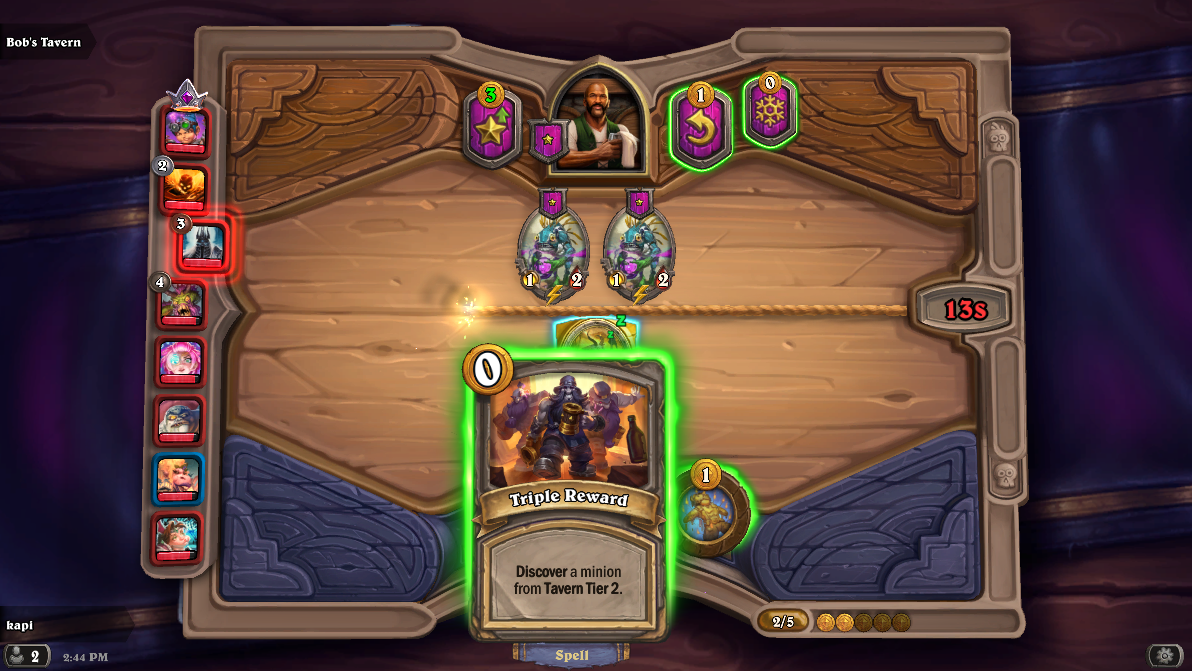 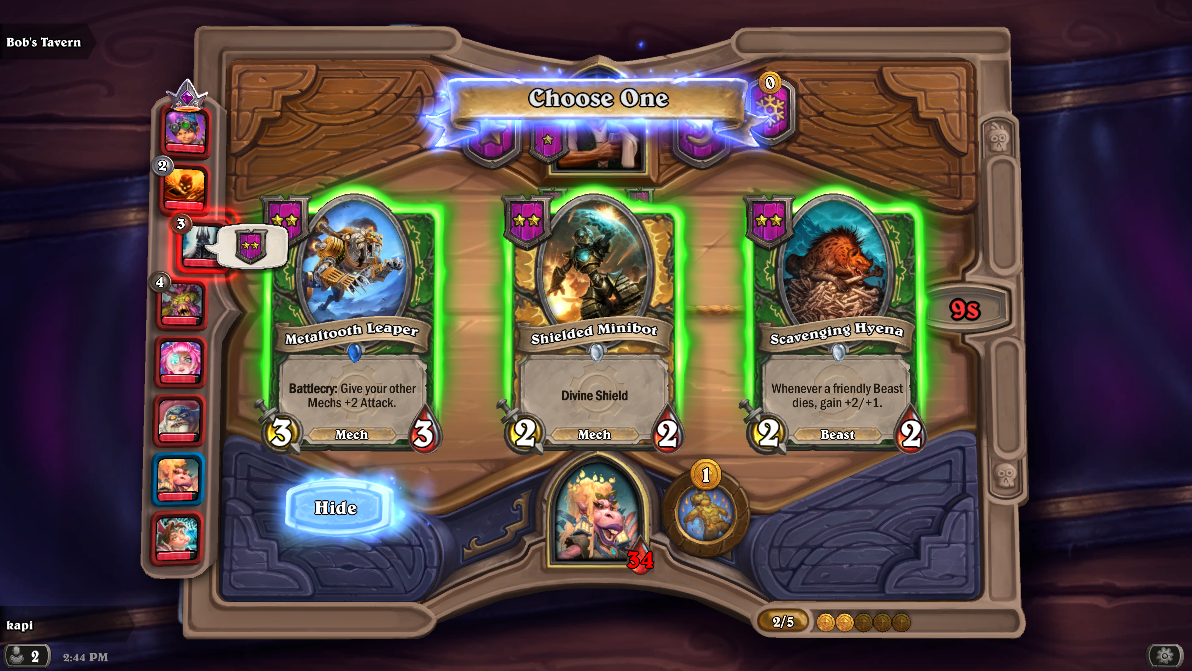 Now that you've got some minions ready, let's make them fight!

The pool of minions is fixed in Battlegrounds. All minions are drawn randomly from a pool you share with your opponents. Because you do not have knowledge of your opponents' boards, unless you just played them in the Combat Phase, you should assume that your odds of getting any one minion offered are slightly less than the starting minion counts, minus what you already have yourself, of course.

The break-down by Tavern Tier is as follows (source):

Upgraded minion via 3-of-a-kind still counts as 3 copies for purposes of the minion availability.

When a player dies or sells a minion, those minions, and all things magnetized on them, get added back to the pool.

There are two exception to the rule - Shifter Zerus and Discover effects (from the reward cards given for 3-of-a-kind). If there are any specific minions still left in the pool (for ex. Mama Bear), transforming into it with Zerus, or Discovering it, will remove 1 copy from the pool.

Though you can actually go over the regular limit. If there are no more copies of a specific minion in the pool, you can still transform into said minion or discover it. This is a very valuable piece of information, since you always have a chance to get the powerful win conditions via these effects, even if your opponent(s) beat you to it and there are no copies of them in the regular pool. It will just require a bit more work.

Ah, the Combat phase, the best part of the Battlegrounds. You literally have no say over what occurs during this phase. It will turn your minions into heroes or villains in your eyes. Of you and your opponent, who attacks first is random. Minions you set up will attack, starting from the left to right, against your opponent's board, same goes for your opponent.

I typically place higher attack, Poisonous, and Divine Shield minions on the left so they don't get killed before attacking. All minions will respect Taunt, be sure to keep this in mind and use buffs on your Taunt minions, they keep everything else alive. There are buffs which occur during battle like Scavenging Hyena and Junkbot which reset after each Combat phase. Both of those cards can be used with tokens and Deathrattles for powerful combinations. Buffs that occur in the Recruit phase via Battlecries and end-of-turn effects will be kept and stacking into future Combat phases, this makes them more valuable and powerful.

You want to create an army that synergize together, minimize bad attack outcomes, and survives. 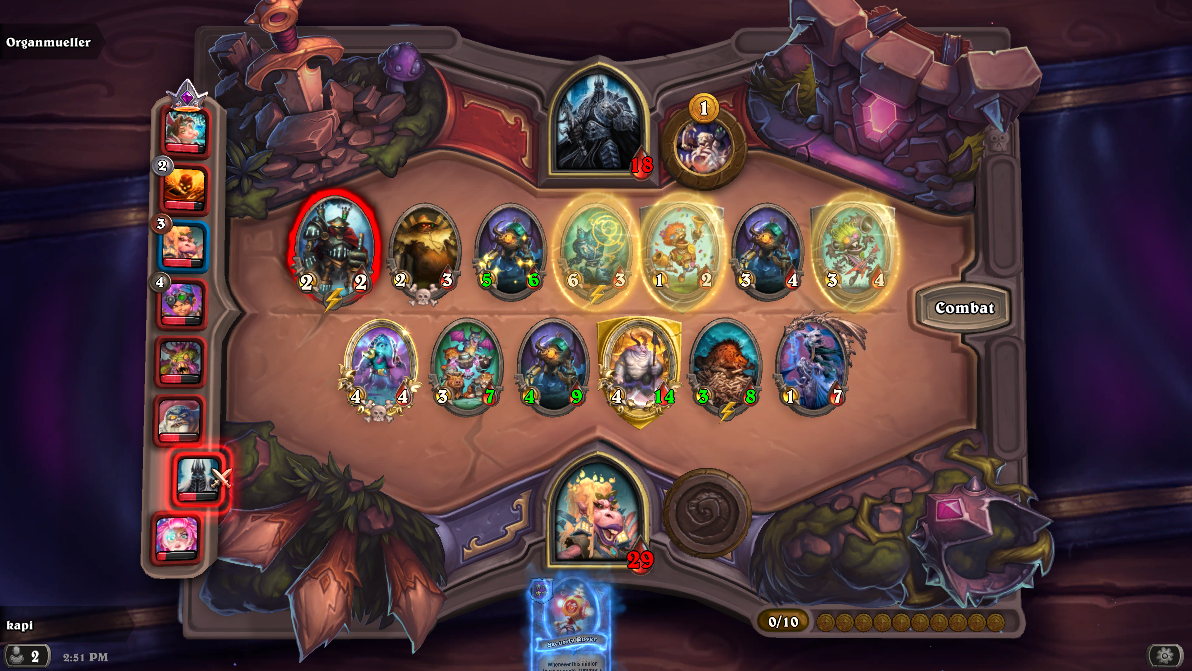 At the end of each Combat phase, damage is calculated. There is base damage that the losing Hero will take, this is based on the Tavern Tier of the victor starting with 1 up to 6. On top of this damage, minions remaining on the winner's board will contribute with damge based on their Tier. A Tier 1 minion adds 1 damage while a Tier 6 minon adds 6 damage, if it survives. There is lots of incentive to build for the late-game and get better quality minions as the game progresses. 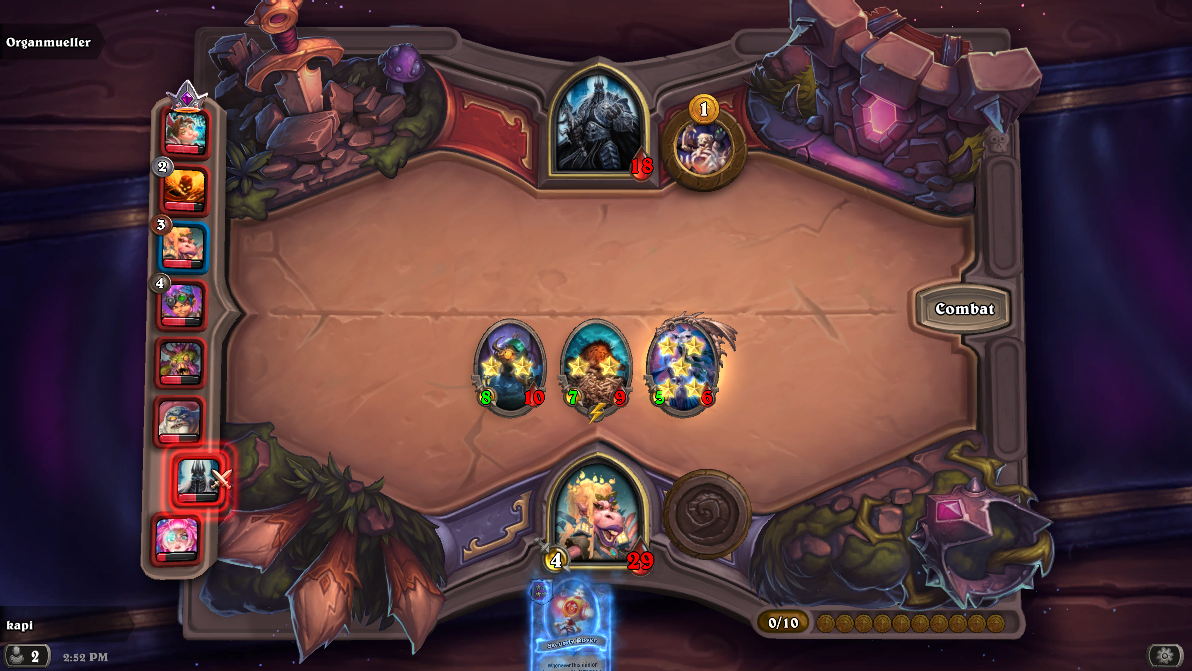 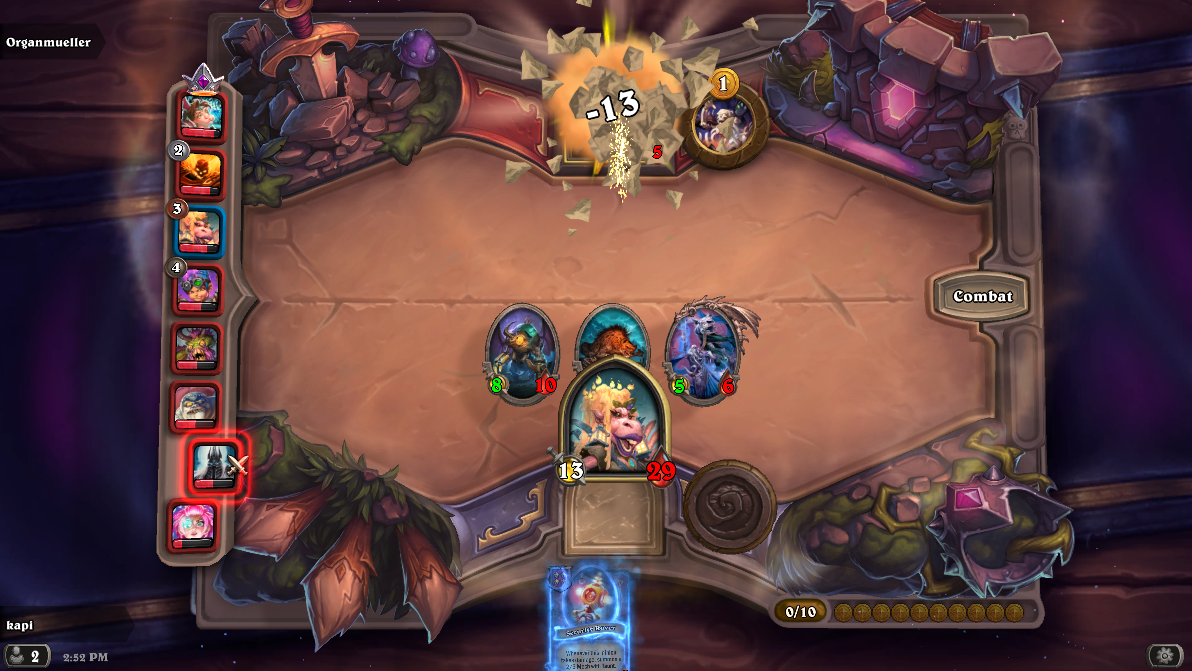 Now that you have a basic understanding of the Battlegrounds, go play it! I love this game, it's incredibly refreshing compared to the rather stale evolve-heavy meta of standard. Each game feels different and I feel like I have to adapt my play based on what the game gives me. Take risks with random strategies, experiment, and most of all - have fun! I've won games with tons of different builds and each game feels different. Stay tuned for future in-depth guides highlighting Turn-by-Turn Strategy and Win Conditions.

Let me know your favorite Battlegrounds experiences and feel free to ask questions in the comments below. 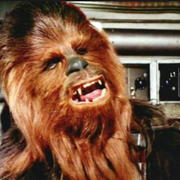