We've been busy working on the most recent 23.2 Hearthstone patch that has released and as a part of this work comes the fun of datamining the game. One new feature we've discovered in our travels relates to deckbuilding in the collection manager.

As always with datamined content, nothing is official until Blizzard announces it.

Add Extra Cards to Your Deck!

Now, you might be thinking this new feature is going to let us go past 30 card decks, and while that would be cool, and technically is still possible, that's not what this is all about.

This new feature will let us, temporarily, add extra cards to our decks so we can go through the deckbuilding process better. If memory serves me correct, this has been a request players have been asking for since the beginning of Hearthstone. I know all too well that I enjoy finding several cards I'd like to create a new deck with in any card game and a part of the finalization process is looking at all the cards I've chosen and seeing where I should make cuts.

With the thousands of cards that Hearthstone has now, being able to fill your decklist up with 40 or so cards that you think might make sense in your deck, let's you very quickly see them all together and help you make your cut decisions easier.

The cap of extra cards appears to be 50 at this time. 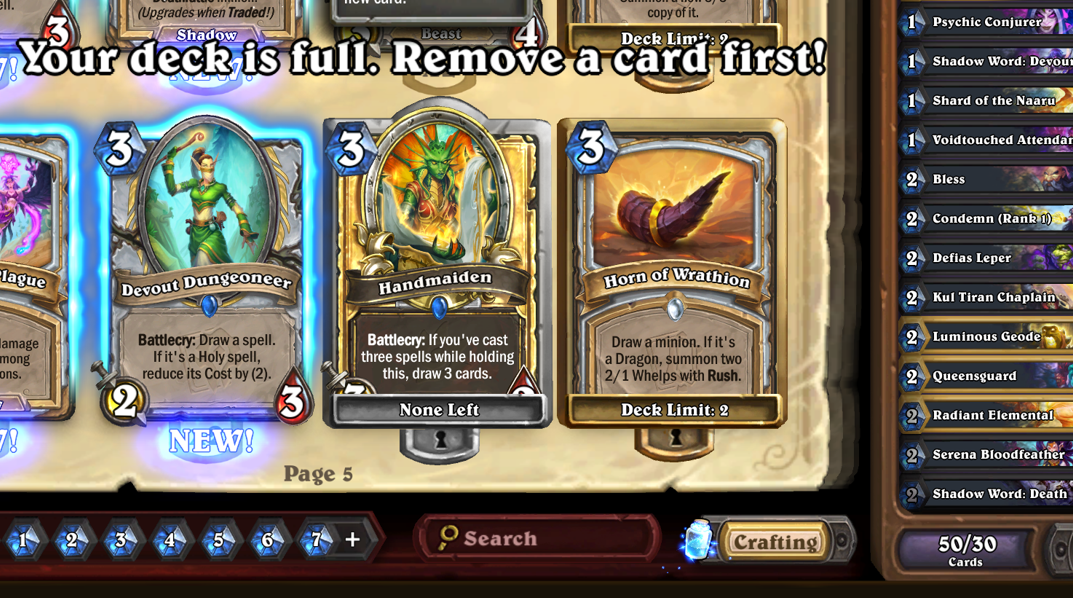 How Do I Add Extra Cards to My Deck?

Hold on there buddy, this feature hasn't been enabled yet for use but it is as simple as adding extra cards to your deck the same way you'd normally add cards to your deck. Only this time around, you'll be getting a popup warning you that you will have to narrow down your card choices before saving your deck. Here are the relevant strings for this feature.

As usual, the {0} bits of the text are string substitutions - the client populates these with its own values.

WARNING_HEADER - Adding Extra Cards
WARNING_BODY - You can add more than {0} cards while building a deck, but must narrow it back down to {0} cards before it will be valid for play.
WARNING_CONFIRM - Got it!

Why is This Not Enabled Yet?

Honestly, your guess is as good as ours. My best guess is that they want to roll it out sometime in the next few weeks as a fun little update that can be talked about.

The feature is currently hidden behind a feature flag. This flag is sent to your Hearthstone client when you're in the collection manager and only if it is enabled on the servers. Because it hasn't yet been enabled on the servers, the appropriate client-side code won't run! Internally, Blizzard is referring to this feature as "Overcapped Decks". Just remember, even though you'll be able to save your decks with over 30 cards, you won't be allowed to play that way!

If you don't feel like waiting for this feature, our deckbuilder has had this ability since our site launched back in 2019!

Was this a feature you've been hoping to see in Hearthstone? When do you think Blizzard will unleash it upon us? Let us know your predictions in the comments below.