Right after the announcement of the announcement from a couple days ago, the new Hearthstone balance patch is finally live! In particular, this patch addressed a ton of cards that have proven to be problematic in Standard, Wild or both formats: if you haven't been enjoying Constructed, there's a fat chance that one (or more) of the cards you don't like got hit.

Here are all the nerfs that can already be found in the client:

As usual, all the aforementioned cards will be eligible for a dust refund, which are already live - go and press that "disenchant" button!

In the following article, we're going to discuss the implications of these changes and what they could mean for both formats. 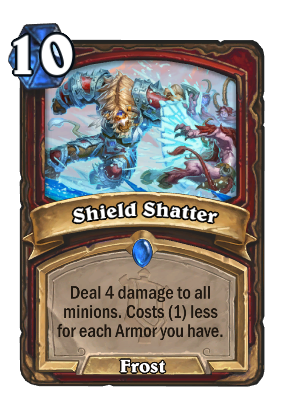 Now deals 4 damage to all minions (down from 5).

One of the changes we expected the most: Warrior's removal was just too efficient, considering that the class had plenty of ways to gain lots of Armor, most of which were rather cheap (Frozen Buckler is a clear example). If you keep in mind the ease with which Garrosh is able to gain 10 Armor and therefore cast a free Shield Shatter, 5 damage across all minions was kind of nuts!

Now that the card deals a 4 damage AoE, things are going to be rather different: while it's still going to be a really good removal, there are some common minions with 5 Health (Wildpaw Gnoll, Onyxian Drake, Igneous Lavagorger, Treasure Guard, Crabatoa) which will now survive Shield Shatter, making Warrior's life more difficult. 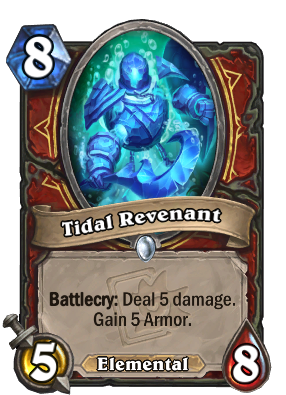 A change we didn't see coming. Although Tidal Revenant made the cut in some Control/Charge Warrior lists in the last two weeks, we think this was due to the archetype's shell being so good that you could pretty much run anything in it, especially because of From the Depths being such a great mana-cheat tool. While we agree that From the Depths needed to be toned down in some way, we wonder whether Revenant's nerf could've been avoided.

Now that Tidal Revenant grants only 5 Armor, it is more comparable to Priest's Holy Fire, except it comes 2 turns later and with on a stick. We weren't high on the card when the Throne of the Tides Mini-Set went live and we're even less optimistic now. 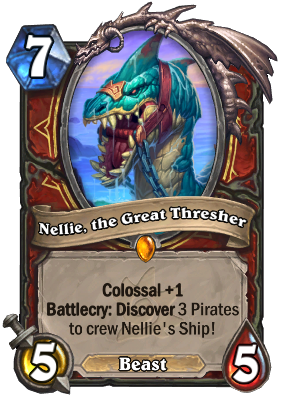 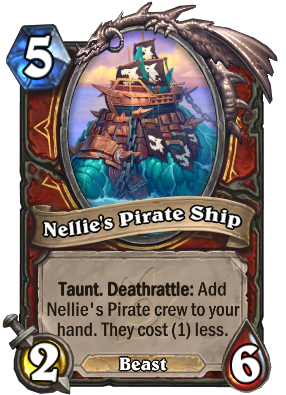 Nellie's Pirate Ship's Pirates added to your hand now cost 1 less (from their cost being reduced to 1).

We think this is what Nellie's Pirate Ship's effect should've read like since the very start, as you cannot print such a card with a 6 Attack Tundra Rhino for Pirates being around in such a narrow card pool.

We think Nellie, the Great Thresher will still be a solid card, since it will bring a lot of stats on the board, will refill your hand with 3 synergistic units of your choice and will still be a really good pull off From the Depths, but at the same time we're glad Team 5 decided to step in and cut down the unfun highroll scenarios that the previous effect was able to generate with so much consistency. 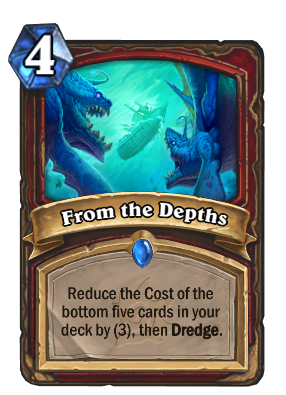 If, prior to this balance patch, Team 5 came to ask us to nerf a single card from Control Warrior, chances are we would've pointed our finger towards From the Depths. While the devs had multiple ways to weaken this spell, they chose the usual cost increase, which should not be disrespected.

Not only a 4 mana From the Depths won't be Discoverable from School Teacher's Nagalings anymore, but the potential followups like Nellie, the Great Thresher and Rokara, the Valorous won't be able to come down on turn 4 as often as they used to, making Warrior's highroll potential less likely to happen.

We question ourselves whether lowering the discount to 2 man per card would've been a better choice, but we prefer to wait for the actual gameplay to give us the answer we're looking for. 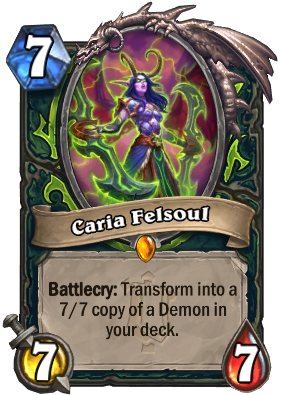 Although it's deserved, we're very sad to talk Caria Felsoul in this article: we've always liked Big Demon Hunter and we feel like Caria paid the price for someone else's sins.

To be precise, the nerf to Drek'Thar pushed Demon Hunter towards slower (but not less aggressive) builds, most of which featured the Caria Felsoul-Xhilag of the Abyss two-card-package. Why so? Because two Xhilags (especially after it got buffed) are pretty damn good, even more if you're able to play one on turn 5/6.

Caria Felsoul was designed to be support for Big Demon Hunter, but it ended up being part of a coinflip highroll that distorted the card's main function. Again, we're sad that Big DH received a hit, but at the same time we couldn't agree more with Team 5's call. 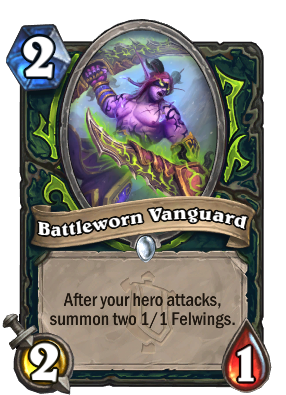 Another change that feels deserved. If not immediately answered, Battleworn Vanguard was able to snowball out of control with ease, generating early and strong board pressure and pushing lots of damage. While Dreadprison Glaive was the main Vanguard trigger, Multi-Strike (especially before being nerfed to 2 mana) allowed for some nasty swings.

In the end, a 2 mana 4/4 that can grow with little to do is a bit too much to handle, especially if you don't have a proper answer right away. Lowering Battleworn Vanguard's Health to 1 will increase the chances that the opponent will have an immediate counterplay, given that 1 damage pings are a lot more common in the game.

The card is still quite good, but don't expect to win the game on turn 2 anymore. 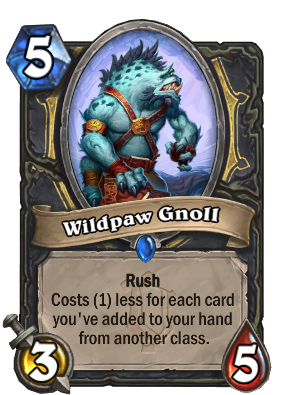 Just as we mentioned in our Buffs Prediction article of a few weeks ago, a fully reverted Wildpaw Gnoll was going to be a rather brave bet by Team 5, and it appears that it is still too much, even with Secret Passage not being around. Consider this as the actual buff the devs originally planned to give Wildpaw Gnoll: turn 2 Gnolls are still going to be good, doesn't matter if they have 3 or 4 attack.

This nerf probably aims to decrease the number of non-games generated by two early Gnolls, which would just snowball damage and inevitably steal games with no much merit from the winning player. We like it. 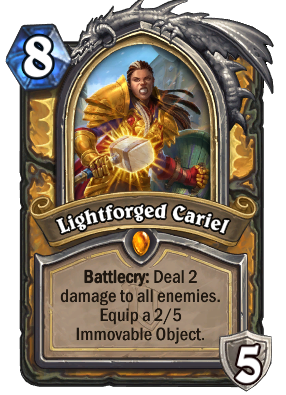 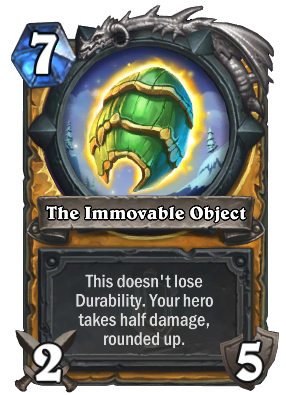 Lightforged Cariel did too much for its cost: The Immovable Object, in particular, represented a very strong turning point for the match for it to take place as soon as turn 7, so it makes sense for Team 5 to make Paladin a bit weaker to aggression.

Don't be mistaken: Cariel now costs 1 more mana, but its functionality is completely intact, meaning that it will still do what we were used to before the balance patch, but just a tad slower. Paladin has plenty of playable archetypes right now, so with the rest of the field receiving hits we should not worry about the class fading away from viability. 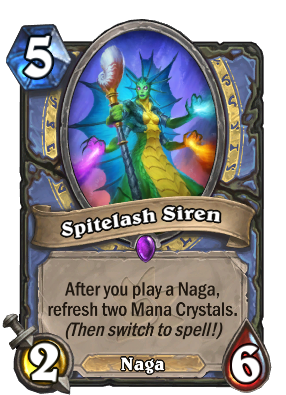 Just like many other cards on this list, Spitelash Siren got nerfed because it was able to do too much by the time it came into play: Battleworn Vanguard was able to generate remarkable board pressure in the first few turns; From the Depths allowed for heavy hitters to come down way ahead of time; [Hearthstone Card (Lightroged Cariel) Not Found] shut down aggressive builds too early. Regarding Siren, we've all experienced what Naga Mage can do as soon as turn 5: if you didn't have an answer to that gigantic board, chances were you were going to lose that game.

Now that Shield Shatter does not deal 5 damage anymore, leaving Spitelash Siren as a 4 mana 2/5 would've been quite risky, as you would've lost its more popular counterplay.

If you connect these two reasons, you'll understand why Team 5 felt the need to operate this change. 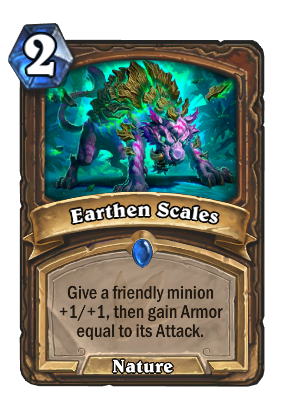 Druid is not even that good right now, so how come Malfurion received a nerf? Printed back in 2017 with Journey to Un'Goro, Earthen Scales has never been a particularly problematic card (except for the Linecracker combo), but times change and so cards printed eras ago may turn out to be more powerful than they were originally intended to be.

This is exactly the case of Earthen Scales: right now, Druid has access to remarkable mana ramp, big stats (take Naga Giant, Ivus, the Forest Lord) and tutors like Moonlit Guidance and Aquatic Form that allow the player to gain tons of armor with little expense of mana. Such play patterns may generate rather annoying scenarios, where you're a couple HP away from winning the game and then your opponents gains 19 Armor for 2 mana and sets up a powerful counterplay you have to deal with.

Probably not the worst offender in the previous meta, but we see the reason why Team 5 decided to operate this change. 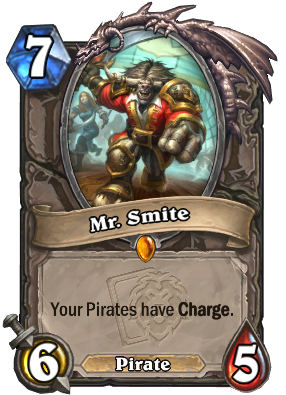 Finally. Funnily enough, we saw it coming from faaaar away. 6 mana Mr. Smite was just too much under many, many aspects. Even if you don't consider the fact that this unit gave (and will still give) all your Pirates Charge, Smite has been the cornerstone of many frustrating interactions:

This card goes to show how strong Charge minions can be in modern Hearthstone, especially if they have such a versatile effect. We don't expect Mr. Smite to never see play again, but at least both its powerlevel and its popularity will decrease, leaving more space for other finishers. 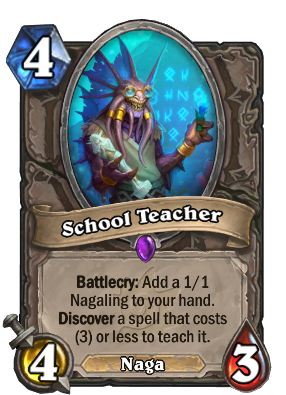 School Teacher was not a broken card by any means, so the reason why Team 5 decided to nerf this unit probably resides in the fact that it was a bit too common.

With its stats reduced to 4/3, we expect School Teacher to not be so widely considered as a no brainer inclusion: the Nagalings will still be very good, but at the same time it will not grant premium stats for its cost anymore, making it a less efficient tempo play.

The card is still going to be very good; moreover, you can safely disenchant all the copies you own, as you'll receive two uncraftable version of School Teacher around the end of the Sunken City Reward Track. 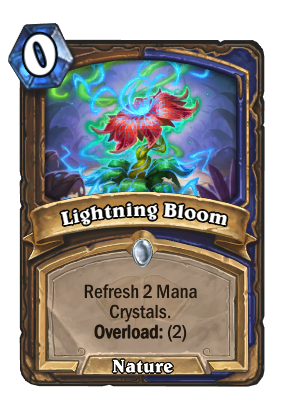 Now refreshes 2 mana crystals (instead of giving 2 new ones).

We all know that, sooner or later, this day would've come: pre-nerf Innervate for two classes has been broken in many, many occasions. It appears that the recent resurgence of Big Shaman's degeneracy was the last straw the made Team 5 pull the trigger and bring down Lightning Bloom from its mana-cheat throne.

Now that Bloom refreshes mana crystals instead of proving ramp, we expect it to drastically drop in both play rate and powerlevel: most of the times, Innervate will be the superior choice, which goes to show how hard the card got hit. You'll. still be able to use it to execute "11 mana" plays, but you won't be able to cheat out powerful cards way ahead of time, which is exactly the goal of this change.

What do you think of these nerfs? Are there any other cards you would've liked to see hit?