Did you think we were done with reviews? No! We're just beginning. There's still a hell of a lot of cards left to reveal, and we're gonna be trying to give you our completely correct reviews for all of them. Don't ask how we're going to handle the traditional massive card dump at the end, I'm trying not to think about it. 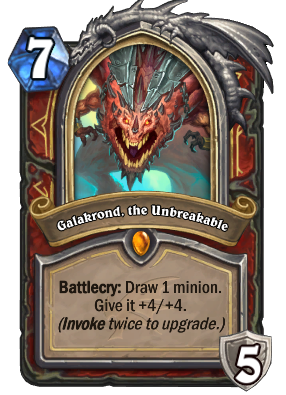 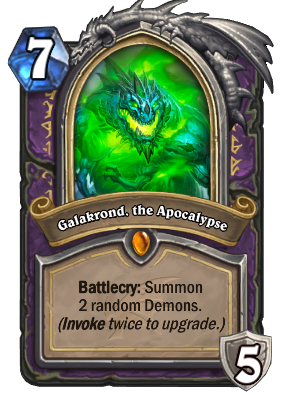 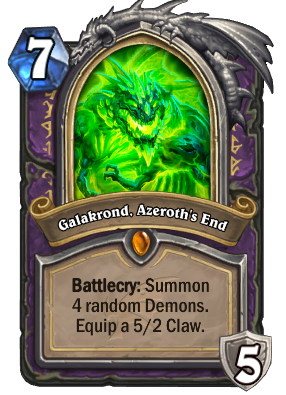 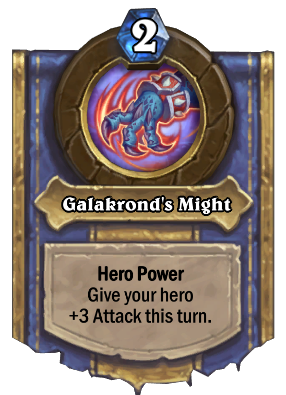 Break me once, shame on you. Break me twice, no can do.

This is now our fourth Galakrond we've seen, and I’m willing to say that it's one of the better ones we've got so far. Warrior has always been an all-star Control class, so surviving long enough to get Galakrond to his final form won't be a problem. It also has a more reliable drawing effect than Galakrond, the Nightmare which also draws cards, since you can waste a Cost-reduction effect on something with an extremely small Cost anyway, but you can't waste a +4/+4 buff. Drawing Tomb Warden with this would be the dream, but that obviously won’t happen every game.

One small negative point to the card though is that every other Galakrond we've seen has an Invoke that you can just play willy-nilly (except for occasionally Galakrond, the Wretched if your board is full), whereas this one does not. If your opponent has an empty board, Invoking and hitting face is fine, but it doesn’t impact the board as much as the others. If you're going for a slightly more aggressive Galakrond strategy though, this may not be a problem. Speaking of being aggressive, this card allows a game plan where you can control the board now, and then go for the attack after you play Galakrond with the +3 Attack Hero Power, the 5/2 weapon, and the buffed minions you drew and thinned your deck with.

Long story short, I think it has quite a bit of potential. When Dr. Boom, Mad Genius rotates out, maybe this will become the "warrior hero you always include". 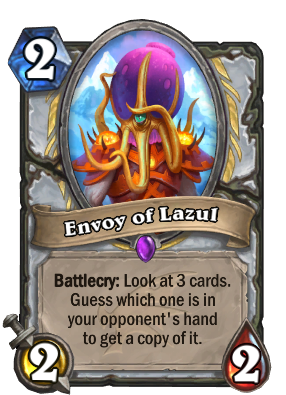 I spy with my cyclopean eye...

Curious Glimmerroot has always been one of my favorite Priest cards, so it's really cool to me to see him back in this set with a bit of a twist. If you were one or two cards short in your Priest deck and didn’t know what to put in it, Glimmerroot was kinda your go-to fill for that empty spot (unless you're playing Big Priest). A 3/3 for 3 that gave you a card from your opponent's deck was pretty good. This similarly, is a 2-drop that you can play on turn 2 and expect it to do what you want it to do. You can’t say the same thing about many other Priest 2-drops. The artwork is really on point too. Unfortunately, it's not all sunshine and lollipops from here on out.

According to Stephen Chang, it doesn’t work the same as Glimmerroot does where it gives you a card that started in their deck, and two random cards that could applicably be put into their deck. Instead, it shows one card currently in their hand, and 2 cards that started in their deck but are not currently in their hand (and if their hand is empty, the Battlecry simply fizzles out). This makes picking the right card a lot harder. If you suspect your opponent is holding an AoE, and one of the choices you get is an AoE, then the choice might be easy from that point. Every once in a while, you might also get a Coin as an option, and you'd know to pick the Coin. But otherwise, it’s going to feel like a 33% chance to pick the right card. Judging by the wording, it also looks like it can offer you a card in their hand that didn't start in their deck, which actually makes it worse because it's harder to guess that.

Even if you get it wrong, you'll still get some knowledge about what's in your opponent’s hand and deck. Although that's nice and all, it's been proven by Chameleos and Madame Lazul herself that that effect isn’t worth as much as we think. Granted, Chameleos was quite slow as it had to sit in your hand for several turns, but Lazul could be played right away and give you a choice of 3 cards in their hand (you didn't need to guess either!), and it didn't see much success.

As much as I wanted this card to be good because I really like Curious Glimmerroot as a card, I unfortunately do not have high hopes for the card, as the ability is much harder to activate. 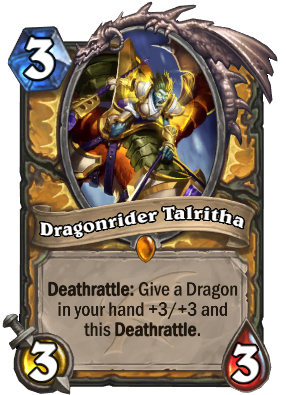 She actually just wants to get back to the ground, but dragons keep getting in the way.

Really nice card for multiple reasons. The flavor is great- Talritha just keeps hopping from one Dragon to the next. The card's also pretty strong too. There's 2 possible ways to use this card. The first is playing it "fairly"- just running it out on curve in a deck with a lot of Dragons and reaping the rewards from the stats. Note that in this case you're gonna want to be playing Dragons on curve so you can trigger the Deathrattle as much as possible. Having high-cost Dragons in your deck potentially delays the Deathrattle, so I imagine this card will be at its best in a deck that runs Nightmare Amalgam, Bronze Herald, Faerie Dragon, etc.

The other way to use this card is to do some wacky hijinks with Making Mummies and/or Da Undatakah. You can get a bunch of these Deathrattles going if the game goes very long. I doubt this strategy will be the optimal way to use the card, but you never know. Overall it's a strong card- wouldn't be surprised to see this end up somewhere. 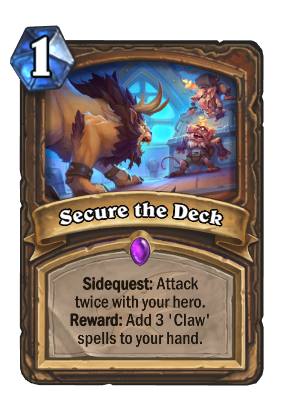 You probably should've done that at the start of the game.

Nice to see Gonk, the Raptor strategies getting a little more support. As is the case with any Sidequest, we have to consider the possibility of drawing this card in the later turns of the game- a strong Sidequest should still be complete-able even when drawn on turn 6-10. This one isn't awful- if you play this and Hero Power the same turn, you've got it completed the next turn with another Hero Power. As for the reward- three Claws isn't going to win you the game by itself most of the time, but it can help you enable your Gonk combo.

Another scenario I see this perhaps being used is some kind of Druid aggro deck. I doubt there's any reason to run a deck like that right now, but assuming you're going to be Hero Powering anyways at some point (perhaps your curve is low), this amounts to a flexible Fireball that also gains you 6 armor.

Overall, I think this is actually one of the better sidequests, even disregarding potential Gonk shenanigans. It's quite complete-able even when you draw it later in the game, and it gives you solid, flexible value for a relatively low mana investment. Your deck just has to be tempo-oriented enough to take advantage of the Claws. 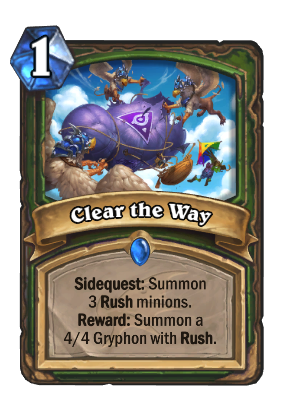 Gonna need you to move, we're in a bit of a rush.

This is a very peculiar sidequest. Its power will depend heavily upon when you draw it, as this is one of the instances where you could very easily end up being unable to complete it - you can only put so many Rush minions in a deck. Even beyond that, an additional 4/4 Rush isn't super useful past about the midgame stage - it's an extra bit of defensive damage, sure, but you're really looking to complete this early on where it can trade more favourably with things.

Springpaw will be a vital tool for decks looking to capitalise on this quest, as will Unleash the Beast; they both offer multiple Rush minions, pushing you towards completion far better than a single minion. Unfortunately, beyond these minions Hunters don't have a lot of great Rush options right now. If this quest wants to have any chance, they need some more good ones in this expansion, otherwise it's dead in the water.

The combination of needing to draw this fairly early and the dearth of Hunter Rush options leaves me very pessimistic about this sidequest's chances of seeing play. 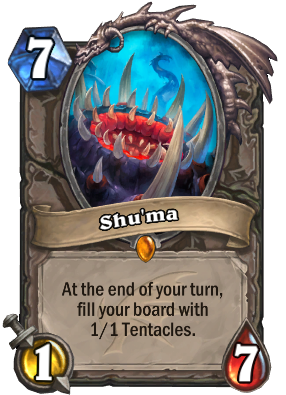 So many potential jokes, all of them incriminating.

On its own, this minion does represent 7/13 worth of stats for 7 mana. That's… not great, but at least it isn't awful?

To find use for this card, you need to look for classes who can take advantage of large boards. Token Druid, Token Shaman and perhaps even Quest Hunter seem like interesting candidates for supporters of this legendary - I'd certainly be wary of a Savage Roar or Bloodlust coming the turn after this hits the board. The real issue is that timing; having to wait until the next turn does not bode well for your chances of capitalising on that large board. There's a reason we don't see Onyxia around much, and her large body makes a compelling argument for being much better than the potential repeatability of Shu'ma.

I don't want to completely count this out - wide boards can be very threatening in the right circumstances, and maybe this finds a home somewhere. I'm struggling to find it myself, but maybe we've yet to see the gamebreaking combo piece. 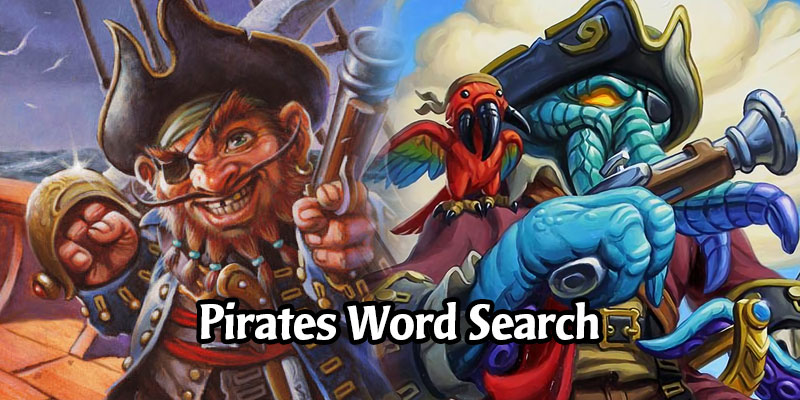 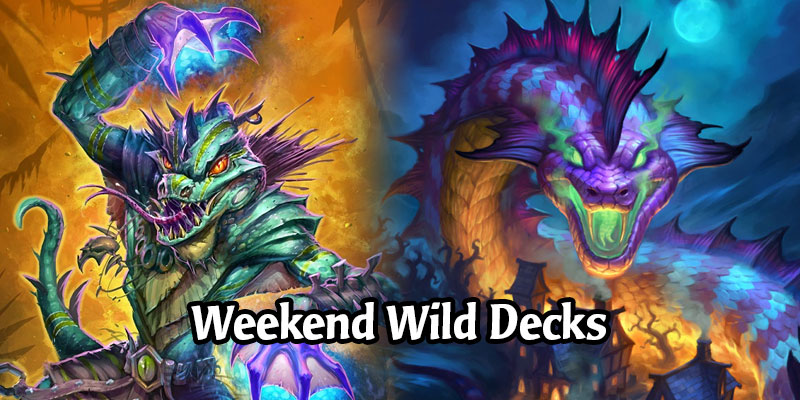