Praise the Elements, Shaman has finally received some cards! Oh, and some other classes got some stuff too, I guess. No matter the class, you can be sure our reviews will be incredibly insightful and bang on the mark, even if we haven't played the class in like 2 years, which definitely isn't the case. Probably. 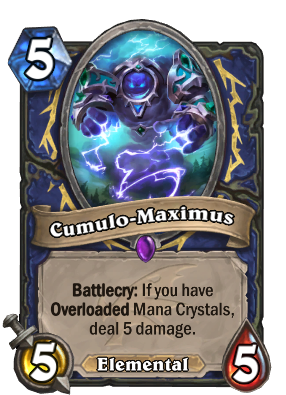 Hey, finally another Shaman card. It's about time.

The card has a really weird name, but the card itself has a really nice ability. A 5/5 that deals 5 damage is quite strong. It's like a Fire Elemental with more damage and a better stats:cost ratio in addition to the effect being conditional and being an Epic.

The condition isn't too hard to meet should you have enough Overload in your deck, but as with all Overload-based cards, you've got to be a bit careful with locking your Mana or you may find yourself in a bit of trouble. Similar to Likkim, you should remember that after you play an Overload card, you'll actually have two turns to use this effect (instead of one) because you'll have a locked Mana Crystal in storage that turn, and then you'll have an "active" locked Mana on your next turn. So yeah, I think it's a good card. Maybe not an amazing card, but it'll at the very least be tried out with and it might yield good results. Double up on Battlecries with Quest Shaman and you could deal 10 damage with this thing provided you have the Overload. 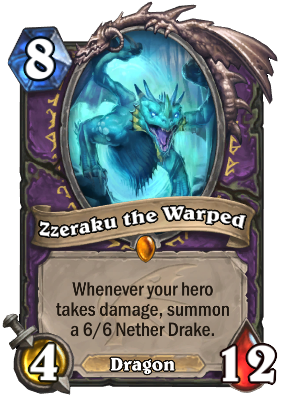 Interesting card. I guess a good one to introduce Dragons into a warlock class, since this can be a kind of build around and can act as a win condition. Slow one, very very slow one, but also a consistent and powerful one. Together with Crazed Netherwing and few of those neutral dragons, we already have a good base for a WL dragon deck, easy. 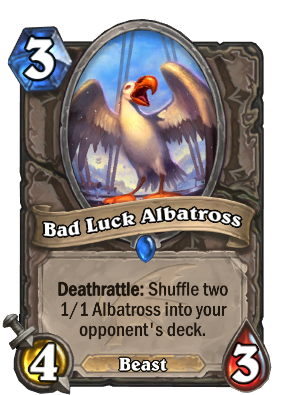 The Rime of the Weasel Tunneler.

I both love and hate this card. It can obviously ruin the day for any highlander deck, but it can be very annoying to pretty much any deck. Getting basically two dead draws is not what you would usually want. While I think this is a very cool card and people are already excited about it, I actually don't think it will see much play after the dust settles. It doesn't really advance any deck's strategy, it just delays your opponent and actually helps control decks that plan to go to fatigue. Maybe zoo deck could make use of this as an ok 3-drop? But it is kinda slow play for a zoo deck, guess we'll see. 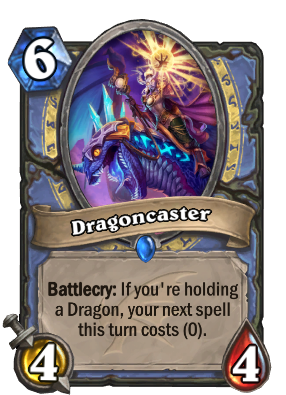 Oh boy. This is a card. Basically the opposite to cards like Arcane Tyrant which can provide even bigger tempo swings. You can play Flamestrike, Pyroblast or Puzzle Box of Yogg-Saron for 6 mana while developing a 4/4. I guess we will have to see if Dragon Mage can become a thing. It got a lot of card generators, but they are mostly value/control tools. I don't really see a Control Mage making a big splash. Maybe a Big Spell Mage with Dragons? Kalecgos cant wait for his friends to join him :) 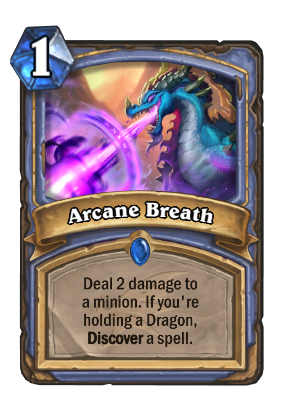 All this time, Arcane Blasts have just been really strong hiccups.

If Babbling Book was turned into a dragon and then cast Primordial Glyph, this is the card I believe would result. Mage has a great dragons-in-hand theme up to this point in the reveal season, so you should have no trouble meeting the discover spell requirement. This card fights in the early game and has the added benefit of generating value as a late-game draw. Discover is the most flexible mechanic in Hearthstone today and this card should continue to prove its' utility. This is an auto-include in a Highlander Dragon Mage which I eagerly look forward to playing. 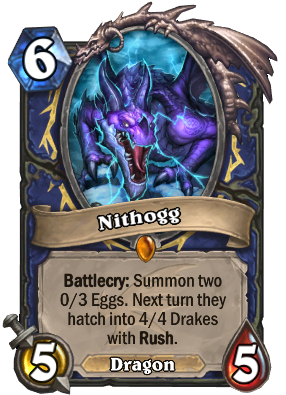 This card confuses me.

The effect itself is pretty interesting; the eggs you summon have a sort of soft Taunt, because your opponent definitely doesn't want them hatching next turn. The stats you get are pretty nice, and as a Battlecry you can combine it with the recent Quest for some extra power. It also ties back into the fight against Nithogg in WoW, as far as I can tell, since some brief video watching tells me that children of his do enter the fight at some point (though not through any eggs that were visible to me).

It just feels… weirdly unlike a Shaman card, for a reason I can't quite put my finger on. Sure, it's a Storm Dragon; but it doesn't really convey that in its gameplay at all. Sure, Battlecry is a Shaman theme; but delayed damage and Rush don't sit right as effects, in my mind.

This is a card that should be quintessentially Shaman, and yet it just doesn't quite land it for me. 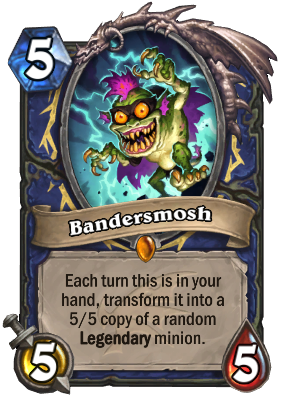 And would you look at that, both Shaman Legendaries revealed one after another. In case you don't know, because it doesn't specify on the card, but the 5/5 copy will always cost 5.

Onto the effect itself though, it's a bit of a twist on these "Shifter" cards (as I nickname them). Whereas other Shifter cards just transform into the base card, Crash Bandersmosh over here always transforms into a 5 mana 5/5 version of the card. All the other Shifter cards we’ve seen haven't been played in Constructed, but does the difference of this card give it the edge it needs?

Well… not exactly. As with all of the other Shifter cards, you still need to hold it in your hand multiple turns to get what you want, and then you have to play it that turn (which could be either easier or harder based on the 5-Cost). Sometimes you could get something really good like a 5/5 Tirion Fordring for 5, although other times it’s just kinda "eh". A 5/5 Deathwing for 5 isn't really much better than a 12/12 Deathwing for 10, and in Thijs's reveal video, it transformed into a 5/5 Archmage Vargoth for 5, which is debatably worse than a 2/6 Vargoth for 4. Unfortunately, I see this as the general result you'll get most of the time, and again, it's really slow because it’ll often sit in your hand for multiple turns for nothing productive.

It's a really cool card, but unfortunately, I don't see it doing any better than the other Shifter cards we've seen before. 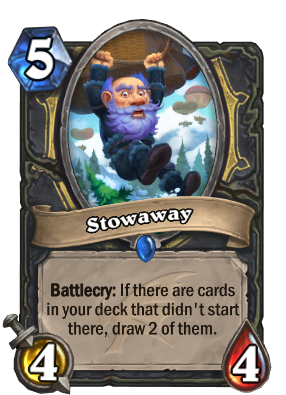 Bold prediction time: this card's actual text will be way shorter in English, something like "Battlecry: Draw 2 cards that didn't start in your deck.", because good lord what we have right now is both overly verbose and difficult to parse. Hopefully this review goes up before we get the actual text, because I'm not rewriting this bit.

(Well, fucking RIP. At least it is actually shorter than before, that was such a clunky translation.)

Anyway, cute effect and a neat way to give Rogue some more fun draw. You can play it a bit later and have the mana to play whatever you shuffled in with Academic Espionage; you could try and set up some sort of combo and draw into the shuffled in Charge minions or whatever more reliably without needing to reach Fatigue first; or you can just fill your deck with spiders and make it a 5 mana 12/12.

Is it great? Nah, not really. But it's certainly one to watch for, because it's just begging to be part of a combo. 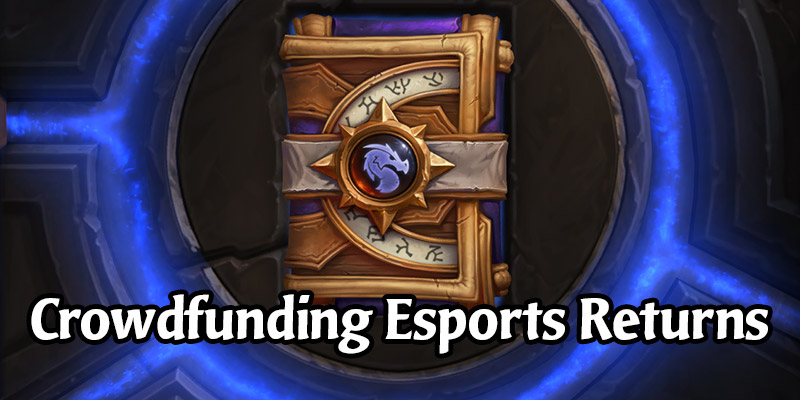 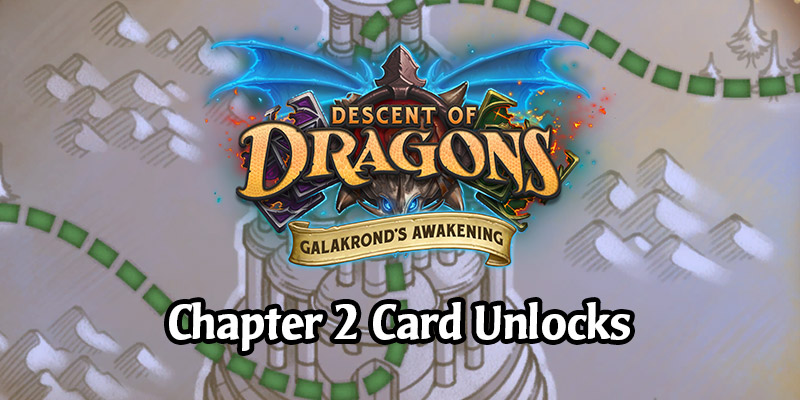