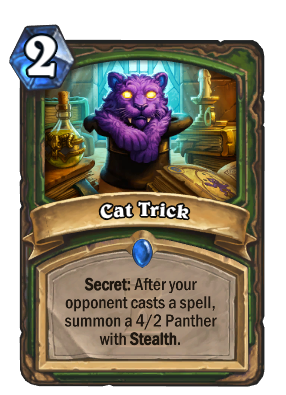 Secret: After your opponent casts a spell, summon a 4/2 Panther with Stealth.

"I know some new tricks, a lot of good tricks. I will show them to you. Medivh will not mind at all if I do."

Stealth - Can't be attacked or targeted until it attacks.

How to Unlock Cat Trick

Unlocked in the Menagerie, in One Night in Karazhan.

How to Unlock Golden Cat Trick

Crafting unlocked in the Menagerie, in One Night in Karazhan.

Cat in a Hat Cat Costume