What is Magnetic in Hearthstone?

Hearthstone has many card effects that are common enough that they get their own keyword - a word or two that immediately tells you how the card works. Let's take a look at the Magnetic keyword.

Play this to the left of a Mech to fuse them together!

Magnetic is a keyword that is exclusive to The Boomsday Project is only found on Mech minions. Magnetic allows a Mech to fuse with another Mech if played to the right of it. If you don't want it to fuse however, you can play it to the left and it won't fuse. Either choice can be the right choice.

If you play on playing two Mechs in the same turn to fuse them together, it may be wise to play the largest one first, then the smaller one (if possible) which will result in less value for your opponent if Silenced. It will also mean you get the larger Mech back if it's returned to your hand.

Keywords that Work Great with Magnetic

Playing Against Magnetic in Hearthstone

Clearing any problematic Mechs may be well advised as it will prevent future Magnetic minions from fusing to it. Silencing a Mech that has been infused will also remove its buffed stats and extra enchantments. Returning such a minion to your opponent's hand/deck will also get rid of any Magnetic upgrades it has.

Magnetic can grant a huge number of keywords at any specific time, so be sure that you know how to play against those as well. 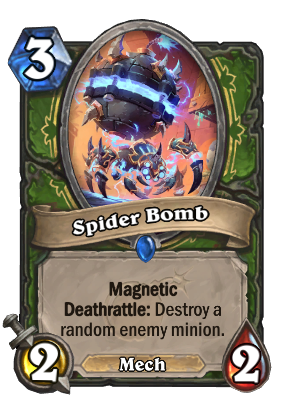 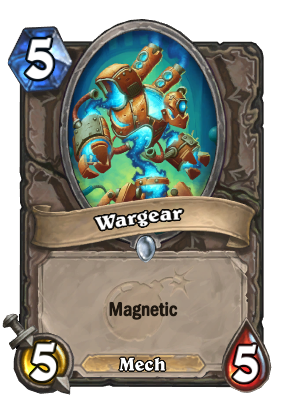 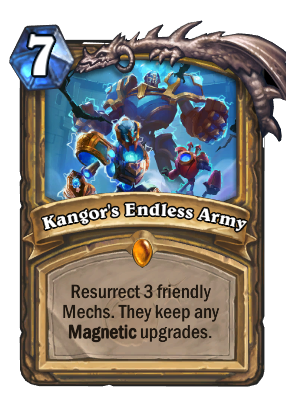 Spider Bomb was the very first card revealed to use the ability. It can easily be played as a 3 mana 2/2 minion, but on a minion that can attack this turn, it can deal some extra pain. Deathrattle synergies are also very strong.

Wargear is an extremely simple application of the keyword, allowing it to be played as a simple 5/5 Mech (although you'd rarely want to play it like this), or grant a +5/+5 buff to a Mech.

Zilliax is one of the most ubiquitously played cards in the entire game, even in decks that don't run any other Mechs. When you DO run other Mechs though, it's just simply that much better.

Kangor's Endless Army is the only card in the entire game that uses the keyword in a way that isn't just simply using the ability. When played, it will summon 3 friendly Mechs that have died this game, but if you fused them with any additional Mechs, they will keep those abilities.