What is Overkill in Hearthstone?

Hearthstone has many card effects that are common enough that they get their own keyword - a word or two that immediately tells you how the card works. Let's take a look at the Overkill keyword.

Deal excess damage on your turn for a bonus.

Keywords that Work Great with Overkill

Giving an Overkill minion Rush or Charge will allow it to attack (and thus, are able to use the ability) right away. Giving it Divine Shield will similarly allow it to survive longer. In very niche cases, you can also give it Windfury, allowing it to attack twice and trigger the ability multiple times.

On spells that use the mechanic, Spell Damage will give the spell higher reach, allowing it to triggers its ability with extra targets.

Playing Against Overkill in Hearthstone

Minions with Overkill will need to wait a turn before they can attack (barring Rush or Charge), thus they can be killed before their ability goes off. Due to having an upside mechanic, they are also usually easier to kill than vanilla minions of equal cost, making this step easier for you.

Because the effect cannot trigger on the opponent's turn, you are free to ram any small minions you have into it without triggering the Overkill ability. That said, if you're unable to kill the Overkill minion this turn, it may be in your best interest not to play small minions, which will provide free fodder for the ability to trigger again. Paladin and Shaman in particular are handicapped in this regard with their Hero Power. 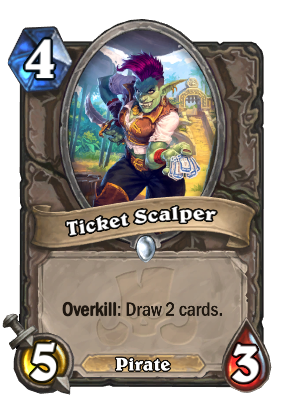 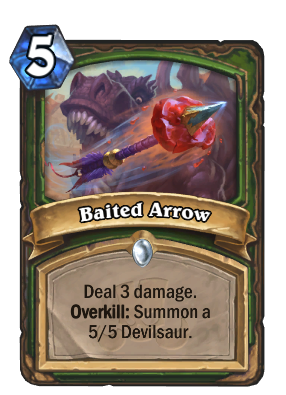 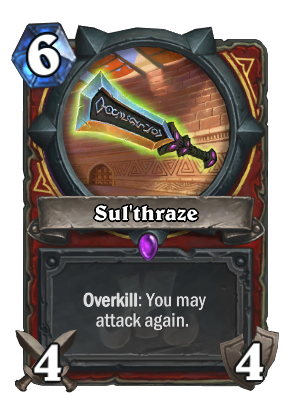 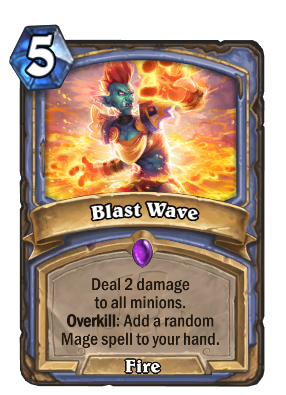 Ticket Scalper is a basic interpretation of the keyword. Its ability to draw 2 cards on Overkill is pretty powerful, although because it lacks any way to use the ability right away and has underwhelming stats for its cost, it can usually be dealt with before the ability can activate.

Baited Arrow is a spell with the keyword. With its Overkill activated, it's essentially a 5/5 Beast that dealt 2 damage, which is perfectly serviceable.

Sul'thraze is a weapon with the keyword, which will apply itself to your hero. Its ability allows you to attack again with it as long as you continue to deal excess damage. This can even extend to future weapons, as if you activate the ability with its last attack, you can equip another weapon that turn and are able to attack with it.

Blast Wave is an AoE spell to use the keyword (and the only one in the game). With this in mind, its Overkill ability will activate for each minion that is dealt excess damage to with it (for example, dealing excess damage to 3 minions with it will give you 3 random Mage spells).