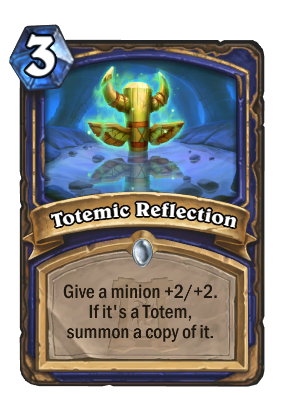 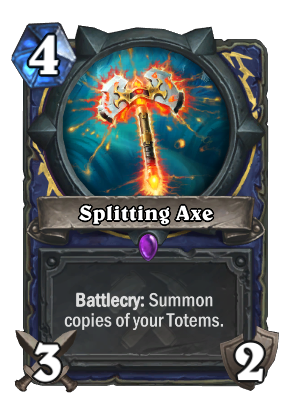 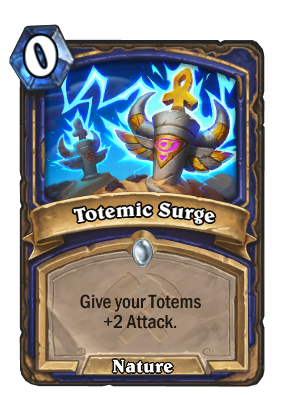 Finally, after all these years with a slow trickle of Totem synergy and support cards, the deck is finally viable; Totem Shaman! None of that lame Even Shaman deck that tries to be and wishes it was as fun as Totem Shaman. Who would've thought a deck that unironically runs Totemic Might and Serpent Ward could actually be good?!

With Totemic Reflection added to the mix, this deck has some serious snowball potential. At its worst, [car.d]Totemic Reflection is a 3 mana 2/4 with Battlecry: Give a totem +2/+2, but it's actually so much better than that! It fits the curve perfectly for playing a Serpent Ward, EVIL Totem, Totem Golem (With the coin.) or even just a totem from your Hero Power on turn 2 into buffing and copying the Totem on turn 3 into getting even more copies of your Totems with Splitting Axe on turn 4 and you can throw in your 0 mana totem buffers Totemic Might and Totemic Surge at any time to make the copies even better!

Since there's so much Totem copying going on now, Serpent Ward actually works great since it will keep chipping away at the opponent's health every turn dealing 2, 4, 6, 8 damage as the copies keep coming and your board gets stronger. Similarly to the SMOrc potential of Serpent Ward, copying EVIL Totem and Mana Tide Totem gives you never-ending value filling your hand with card draw and Lackeys every turn.

A small package of Overload cards has been included to buff your totems (and Tunnel Trogg) even more with Storm's Wrath and Vessina. Serpentshrine Portal is a new card that has surprised me a bit with how solid and versatile it is. Turns out having a Darkbomb tacked onto a random 3-drop is pretty good. Electra Stormsurge has also been included as a 3 mana better Bloodlust when paired with Totemic Surge, or for pushing some extra damage to face with a doubled Totemic Smash or Serpentshrine Portal, especially if you've copied a few Spell Damage Totems.

In just a couple hours of playing on ladder, I was able to climb from the floor of rank 5 diamond to halfway through rank 3 diamond. The deck seems rather promising and I intend to push for legend with it.