What Dino-sorcery is this?  A really fun deck!

Want a board full of these with a bit of magic? You’ve come to the right place. 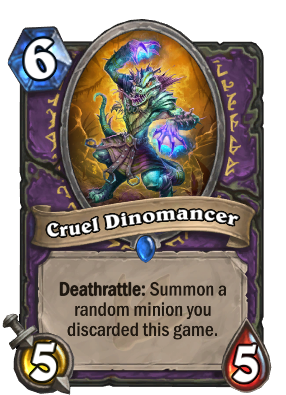 I have tried to make a deck which leverages a great, fun combo.  I have enjoyed this immensely and hope you do too.  These are the key combo pieces: 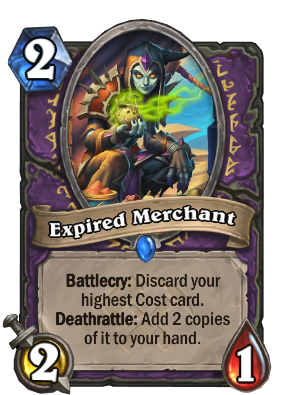 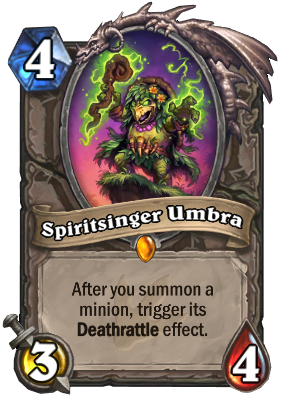 I have found some good ways to speed up/curate the combo: 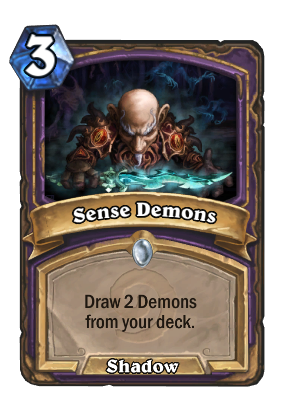 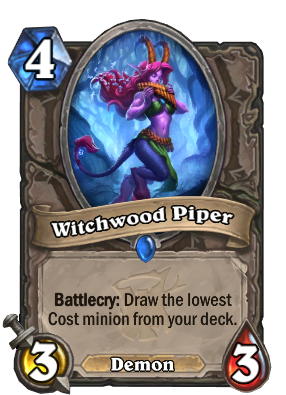 Note also that there are no 3-drop minions in the deck (and the bare minimum number of 4-drop minions).  This means that Witchwood Piper has an excellent chance of drawing the other important 4-cost minions after the Expired Merchant has already been drawn.  These are Spiritsinger Umbra and Lorekeeper Polkeit.

The deck's biggest counters are only really available to Priest and Shamans (given their silence and transform effects).  Freeze effects can also have a debilitating effect if a Mage can get a head of steam. Mill decks can be troublesome (but not unbeatable).  But against aggro, mid-range and control it shines. And against combos - try and get the combo going as quickly as possible!

In slightly more detail, the combo is generated by doing the following:

Removal and synergises with Rafaam's Scheme and any Worthless Imps generated by the use of Sense Demons if the Witchwood Pipers have already been drawn.  In a pinch can also be used to remove the Expired Merchant in the same turn it's played.

Good to get rid of the Expired Merchant on the same turn and a bit of damage.    Synergy with Lesser Amethyst Spellstone and Steward of Scrolls.

Excellent to help with finding the combo pieces.

A good card to help with clearances.  And useful for getting rid of the Expired Merchant on the same turn it is played.  Use with Steward of Scrolls for a great clear.

A great early board clear, especially for aggro.  You tend to have large hands with this deck so it works well.

Great to pull the Witchwood Pipers.  And if they have already been pulled, you get Worthless Imps which can be used with Plague of Flames.

Great AOE/board clear.  Synergy with Lesser Amethyst Spellstone and Steward of Scrolls in a pinch.

Healing.  Synergy with Rain of Fire and Hellfire.  Don’t be afraid to use it to survive without it being upgraded.

See above.  A fantastic way to get the Cruel Dinomancer.  And to get Zilliax and the companion Mechs to start stabilising via heals.

See above.  The way to draw combo pieces.  Synergy with Sense Demons.

Heal and target for Zilliax and Wargear.

A flex choice, definitely.  Good for increasing spell damage/lifesteal and a useful discover mechanic to help out in a pinch.  Usefully, a 5 cost minion so I would suggest another 5-cost minion if you want to replace it.

A great target for Zilliax (and Antique Healbot).  Again, chosen as it's a 5 cost.

All round great card.  Great with the other mechs. Heal and defensive.  Again, a 5 cost.

See above.  I love this card.  You'd be surprised how often people still hit this card (without Spiritsinger Umbra on the board) and are surprised when it pops back up…

Vs. Aggro - don’t go for the combo pieces - go for cards which will keep you alive.  Such as Rain of Fire, Defile, Drain Soul, Dark Skies, Hellfire.

The only cards that can wreck a board of self-repeating Dinomancers are as follows (I hate these guys):