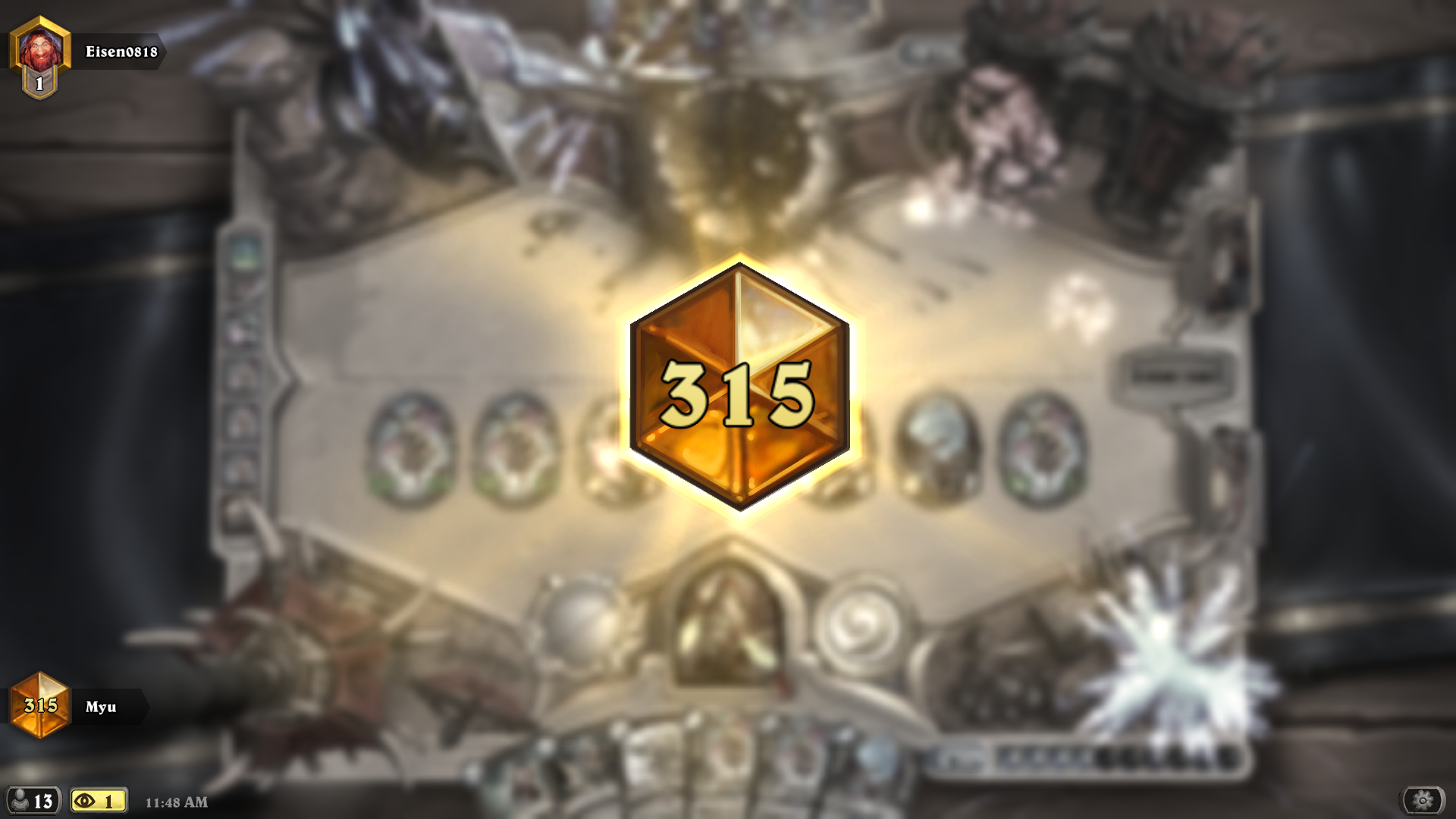 Hello, this is my first deck posted on OutOfCards. I was a HearthPwn user and the creator of "Even Better" and "Holy Tiger TTK" decks there.

In my opinion, the most impactful buff of "Rise of the Mechs" is the Pogo-Hopper mana change. Over the course of a game, pogo hopper is typically played 4-8 times. Thus this buff saves us at least 4-8 mana in a game. In addition, 1-cost pogo hopper can fill the mana curve very well, often utilizing the 1 extra mana that would have gone wasted otherwise. Moreover, the reduced cost makes many combos to be played earlier and more easily.

However, Pogo Rogue is listed as tier 4 on HsReplay with 40% overall winrate. I can think of two main reasons for this. First, players are not running the right cards. The most popular version on HsReplay runs quite a few sub-optimal cards, which I will explain in "card choice" section. Second, Pogo Rogue is difficult to pilot. Pogo Rogue commonly has a handful of low-cost cards so there are many possible plays each turn, which makes it difficult to find the optimal or nearly optimal play.

Since I believe most plays have not been playing Pogo Rogue correctly, I will try to write a detailed guide. Feel free to ask questions about things that I did not address in the guide. If you think this deck is helpful, please upvote so more people will see it.

Sap: Extremely powerful against any aggro mech deck. Gains both card and tempo advantage by returning a magnetic buffed minion.

Blink Fox: Good 3-drop that helps mana curve. 3 attack is effective against hunter's Ursatron and warrior's Acolyte of Pain. Getting 1 playable card out of 2 foxes is good enough.

Fan of Knives: Great against all mech decks by killing 1/1s from SN1P-SN4P and Replicating Menace. Also great against lackeys.

NO Daring Escape: This card sacrifices tempo to generate resource. It is only good when we are ahead on board. We will have enough resource if we properly play spirit of the shark with our card generations. You can look at the game where Thijs played Pogo Rogue against Kripp's zoo at Mechanical Inn-vitational. Thijs had both Daring Escape stuck in hand because he could not afford sacrificing tempo against zoo.

NO Myra's Unstable Element: We usually have enough resources if we combine spirit of the shark with card draws and lackey generation. We don't want to burn the precious pogo-hoppers that we shuffled with lab recruiters. What's more, we don't run Togwaggle's scheme to sustain us from fatigue.

NO Tak Nozwhisker: To do the combo, we usually need 10 mana and 3 cards in hand. Tak only gives card advantage the turn he is played, while the pogo-hoppers he generates can only be played next turn. Overall, this card is too slow and difficult to be effective.

Despite the few legendaries, this deck is not too expensive. If you are missing any cards, here are some cards that you can consider to replace them.

Mage: Keep Barista Lynchen and minions with more than 1 health.

Paladin (mech by default): Keep Sap and Barista Lynchen. Keep Vanish if you don't have Sap

In general, we want to control the board and build up pogo-hoppers until the opponent cannot answer. Each pogo-hopper after the first one will be beyond the model, generating great tempo. We always want to make sure that we have at least 1 pogo-hopper in our hand or deck. If opponent is not mage, rogue or warrior, playing 1/1 pogo-hopper on turn 1 is fine.

Try to clear his board early on. Leaving 1 minion is fine. Start to push damage and threat lethal around turn 7 or we will be overwhelmed by The Forest's Aid.

Try to clear his mechs in the first 4 turns so he cannot magnetic to deal face damage. If you cannot kill all mechs, ignore goblin bombs. Keep in hand an answer for Venomizer Missile Launcher combo.

Try to put as much board pressure as possible early on so opponent is forced to play cards to control the board. With fewer cards in hand, he will have a higher mountain giant cost. Try to kill his 12-cost minions and Sap 10-cost minions. Keep track of the number of cards in his hand and think through the outcome of Vanish.

Maximize Sap value and keep track of his resurrect pool. Usually after 1 round of vanish, our pogo-hoppers should be able to eat his mechs.

If we don't have Zilliax in hand, try not to use face to kill his minions after early game. Keep track of the number of Eviscerate and Lifedrinker opponent used and be aware of the amount of burst damage he can do. However, if we are behind on board, don't try to play around lethal because we should take the risk and play to win.

The biggest threat is Thunderhead. Whatever it takes, kill it (usually with the help of lackeys). If opponent has a full board of small minions and few cards in hand, don't Vanish. Take the bet that he has not Bloodlust but The Storm Bringer. If we can vanish big legendary minions, we win.

This match-up largely rely on luck. If we draw Backstab and Fan of Knives and get kobold lackey or goblin lackey, it is an easy win. No fan of knives, no win.

Very different game-play compared to other opponents. Warrior has large amount of removals so he can deal with pogo-hoppers for much longer. If we shuffle pogo-hoppers, we would probably run out of cards before we can kill him. The better strategy is to hold pogo-hoppers in hand until we can play Pogo-Hoppers (1 copy is fine), Barista Lynchen and Lab Recruiter in one turn. We want to add pogo-hoppers back to our hand and shuffle barista lynchen. If he does not kill all pogo-hoppers on the board, we can increase the number of pogo-hoppers we are holding each time we play barista. Beware that some control warriors run the Mecha'thun combo so make sure we have lethal before he runs out of card. The warrios with mecha'thun appear to be much less greedy than typical control warriors. 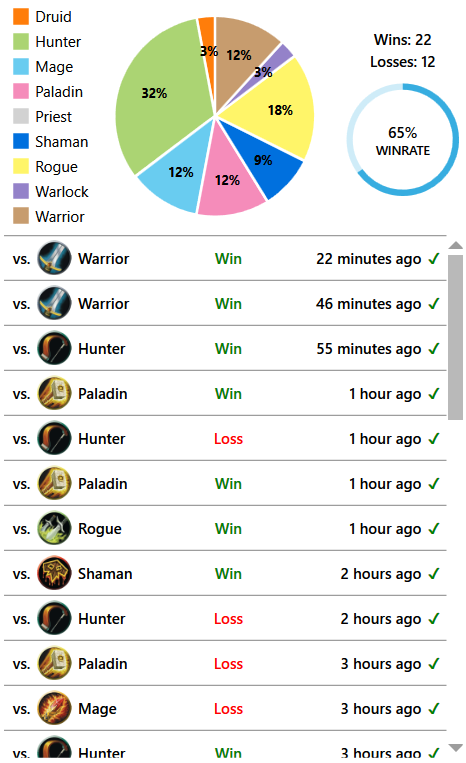