So first and foremost.  Let me provide stats as to prove the efficacy of this deck. 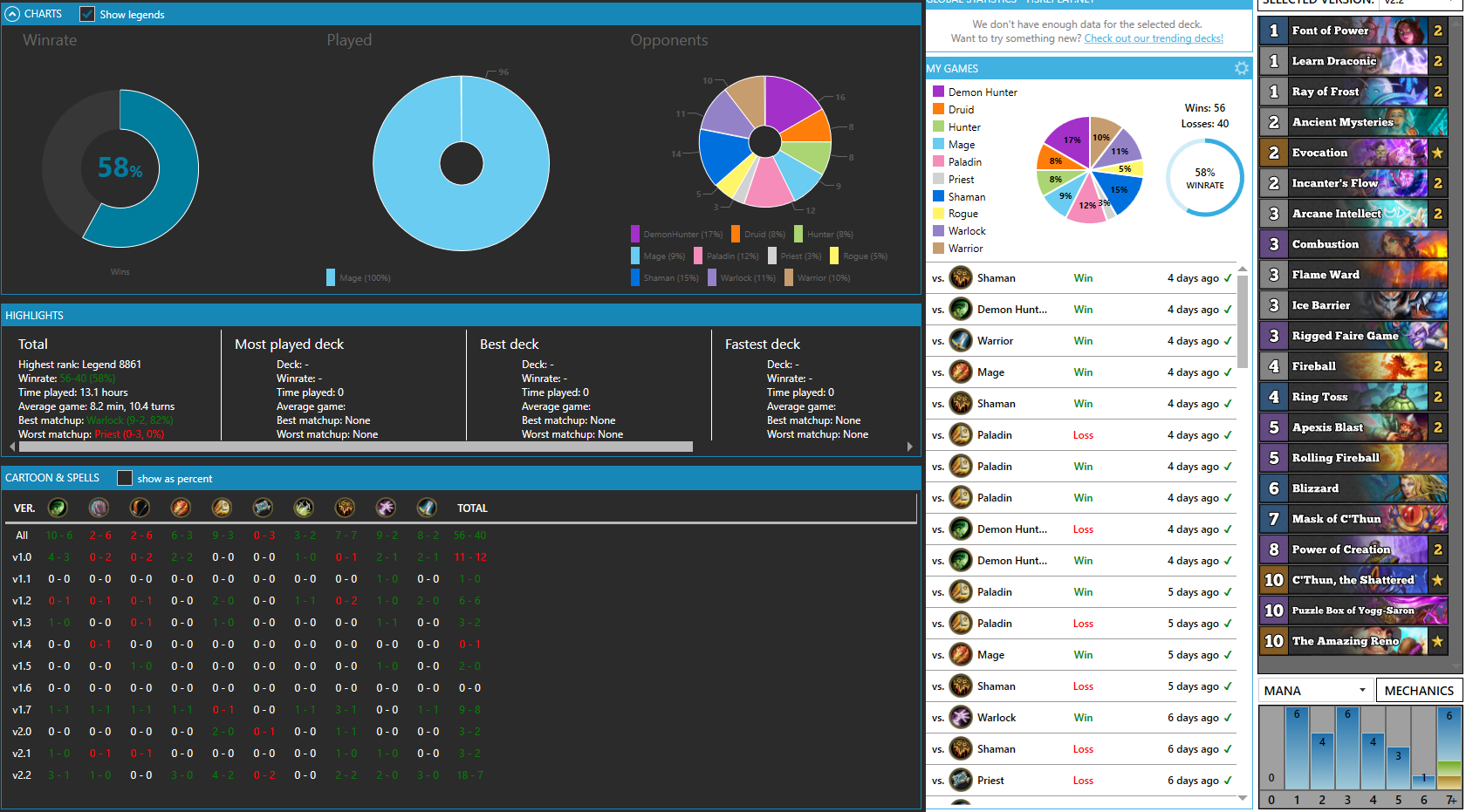 As you can see...  I went through many different iterations of this over last season. It's very weak against priest, but thankfully priest is pretty absent in the meta for the most part.

It's strength lies in it's multiple win conditions:

The reason we have 3 win conditions?  Pretty much Tickatus Warlock and Clown Druid.  Without Amazing Reno or Puzzle Box, your efficacy against those decks goes down immensely.

Now to address probably the elephant in the room.  Why am I not running Deck of Lunacy?  Put simple.  I didn't get it in my bundle packs.  It seems like a fun card, but nothing worth crafting.  If you have it, great.  Drop the Evocation and run Deck of Lunacy in it's place.  That being said,  Evocation is a minor hand-refill.  It's not a win condition but can help you win certain matchups.  It's also arguably the worst card in the entire deck.  Often unplayable, can't generate enough spells to give you versatility.  So I do think Deck of Lunacy is a strictly better card to include in your deck over Evocation.

The deck has the versatility to be aggressive due the amount of card draw, while also being control against slower decks.

What is this decks goal?  In short tempo. Learn Draconic plus Incanter's Flow are probably your two most critical cards early game.  You need to reduce the cost of your spells asap, and you need to use the spells you do draw to generate an early 6/6 to manage the board state.

Card draw:  The deck does include a copy of Rigged Faire Game.  This can be swapped out for another secret of your choice, but I DO suggest 3 secrets in this deck.  In early iterations of the deck I ran 2 copies of Ancient Mysteries and 2 copies of Ice barrier and found it too clunky.  Ring Toss, when corrupted should provide you with all the extra secrets you need.  Ancient Mysteries at 2 copies often would draw nothing with the 2nd copy.  The key to the deck is not playing your "free" secret drawn through Ancient Mysteries until it's highly beneficial to do so.  You can generate extra value with a 0 cost secret by baiting out a wider board,  denying a chance at lethal, or waiting until you have a board state that is beneficial to play the secret.  Notably cards generated through Font of Power can synergize extremely well with a 0 cost secret (Apexis Smuggler and Dune Sculptor namely)

I ran 2 copies of Blizzard for awhile but found that the versatility of Rolling Fireball (against low hp wide boards or against single target high HP targets) was better.  A single copy of blizzard is useful for synergizing with Ray of Frost in addition to stalling a turn against super wide boards.

I also ran 2 copies of Mask of C'Thun, but found that while it could seal out games early if you got lucky, it was often a dead draw in other matchups.  Ultimately your goal with Mask of C'Thun is not to use it as a board clear, but rather to use it as a 7 mana (or cheaper) Pyroblast.

The deck is extremely fun to play.  You won't win every matchup and it is psuedo RNG based.  But it can pull off insane fun combos, and the feeling of playing a fully assembled C'Thun never gets old!