I've labeled this deck as Totem Shaman, but it's a bit of a Hybrid Shaman in truth.  You can play for big tempo swings with totems and amalgams, but also plays a little like the old Aggro Shaman with starting plays like t1 Tunnel Trogg into t2 Totem Golem.  You can also burst at the end with either Bloodlust or Spirit of the Frog to chain spells Lightning Bolts into Crackles.  Diligent Notetaker can also help with that final spell burst as it can give you another copy of either Lightning Bolt to draw the second Crackle, or just give you a second of either spell for that damage.

Some of the cards in here I just put in because I wanted to run them but could be replaced.

Stormstrike has actually been helpful at times, and one game I even played Notetaker > Stormstrike > Stormstrike copy to get the extra 6 attack to swing face with and win.  I've thought multiple times about replacing this with Lava Burst though, but I keep forgetting to do it.  And then Stormstrike keeps coming in handy so then I decide to leave it in again.  It could also be swapped out for a Lightning Storm if you are facing wide, small boards.

Mistrunner is a new card and I wanted to use it.  Similar to a card like Bonemare but a little cheaper, and it could trigger Tunnel Trogg.  However, since Tunnel Trogg is the only card that actually benefits from Overload, you could swap out either Mistrunner or Trogg.  Or both!  If you find yourself using the spell damage plan a lot, you could swap Mistrunner for another Squallhunter for the spell damage (which is why I have one Squallhunter to start with).

Storm Chaser is a one of to help pull the single Bloodlust.  Really, you could also replace Chaser with something else, or you could maybe swap something like Mistrunner for a second Bloodlust if it seems to be a helpful strategy.  A good Chaser replacement could be Thunderhead to help deal with small, wide boards.

Overall the game plan is simple: play for tempo while setting up big burst turns to finish the game.  You mostly do this with the totems and amalgams, totem buffs and copies, etc.  Grand Totem Eys'or is actually the main reason I wanted to make this deck.  I quickly completed the xp achievement this way.

Against some decks, like Secret Mage, you are going to have a tough time.  But against others, like Big Priest, you can actually win easily if you push tempo and face damage with minions/weapons while saving your damage spells to burst them down once they put up their taunts to feel safe.

Haven't been playing a ton so far this month, so I'm just getting into the Diamond ranks of Wild right now, but over the course of some optimizations and such, I am 12-8 at this time.  The deck is definitely not OP or a meta breaker, but if you enjoy playing Shaman you could use this to have a little fun with Totems!  Like this!!! 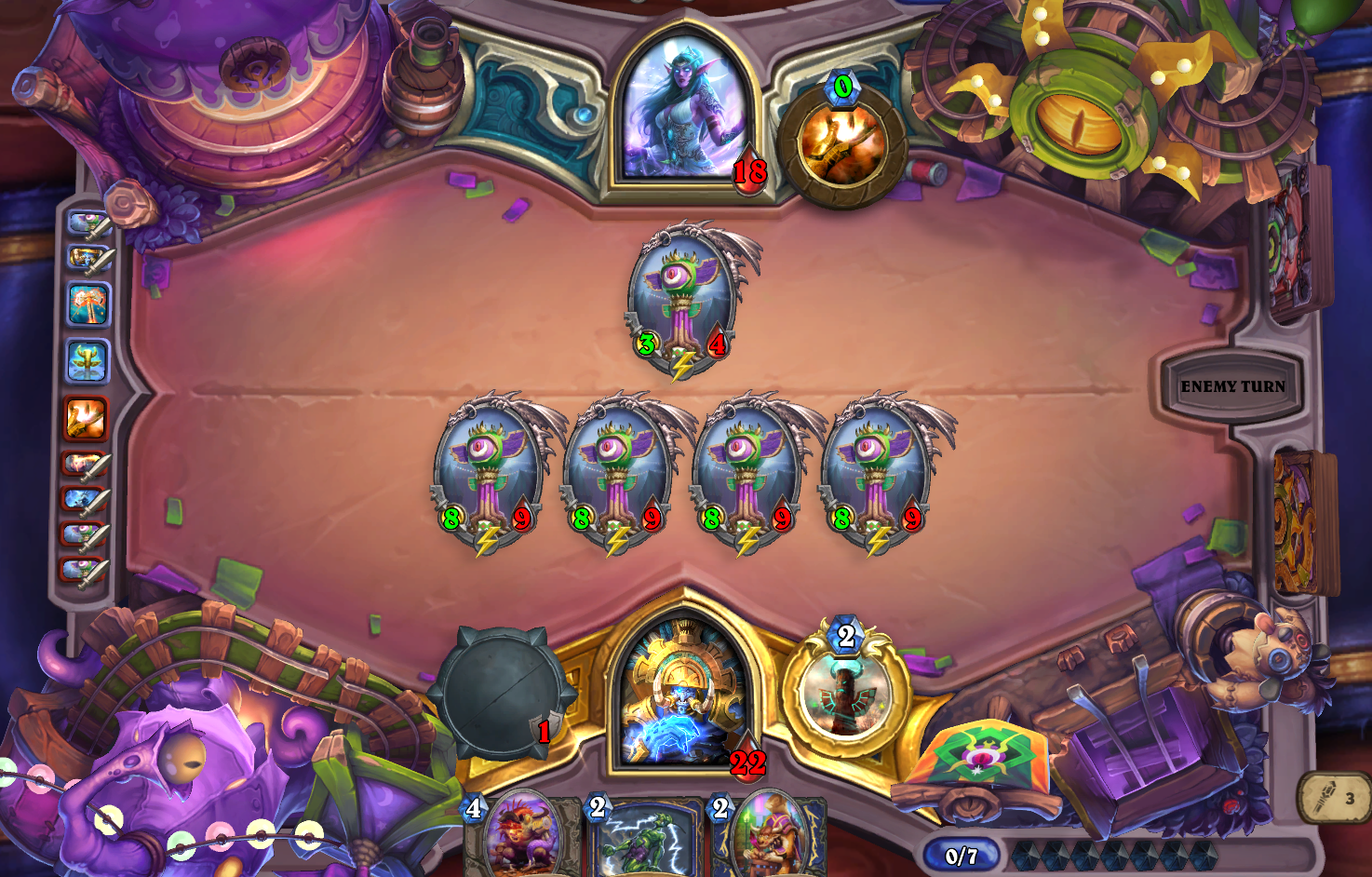