So essentially, this deck is a Face Deck, aiming to basically only go face and trade when it's absolutely necessary. This deck has the Ballista Shot Hero Power at it's disposal, making it easy to hit our opponent's for 3 damage. This list is the list I found best for the Rise of Shadows Meta, and as such, can be changed in the future. Since the deck is an Odd-cost only deck, it tends to play out relatively the same each time. You mulligan for 1-cost minions generally and try to curve out as best as possible. Thanks to Baku the Mooneater, this deck came to life. With the strong cards of Alleycat and Rat Pack, two cards overshadowed in their Standard time, this deck can hold a strong board early.

I find that most of our 1-cost minions are ideal in the opening hand. Typically, I'll find myself tossing away Rapid Fire and Tracking most of the time. Otherwise, I would say that against Warlock and Priest, [Hearthstone Card (Ironbeak) Not Found] Owl is essential, at least as a one-of in hand due to our deck's need for early game. Dire Mole, Alleycat, and Fire Fly are definitely the stronger 1-cost minions in the deck, especially for early game. Against a Rogue, I'd definitely consider keeping at least one Leper Gnome, as it's super potent against the class.

Why and Why Nots

I'm sure there are some cards that may poke the brain at inclusion and non-inclusion. Bearshark was originally in the deck, but wasn't sticky enough, which is where Rat Pack came in. Rapid Fire may also seem weird, as it is not a minion for the early game. While it could be replaced, I find it's ability to split a Hunter Hero Power among whatever you want for the same cost to be very good. Rapid Fire also ignores Taunt, making it good for somewhat grindy match-ups. Nightblade is probably the only real late-game style card in the deck, but it's also fast, making it good for the deck regardless. This one-of is good for dealing direct damage as well, but is easily the most replaceable card in the deck.

If you have any questions or comments, please share! 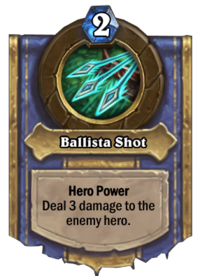