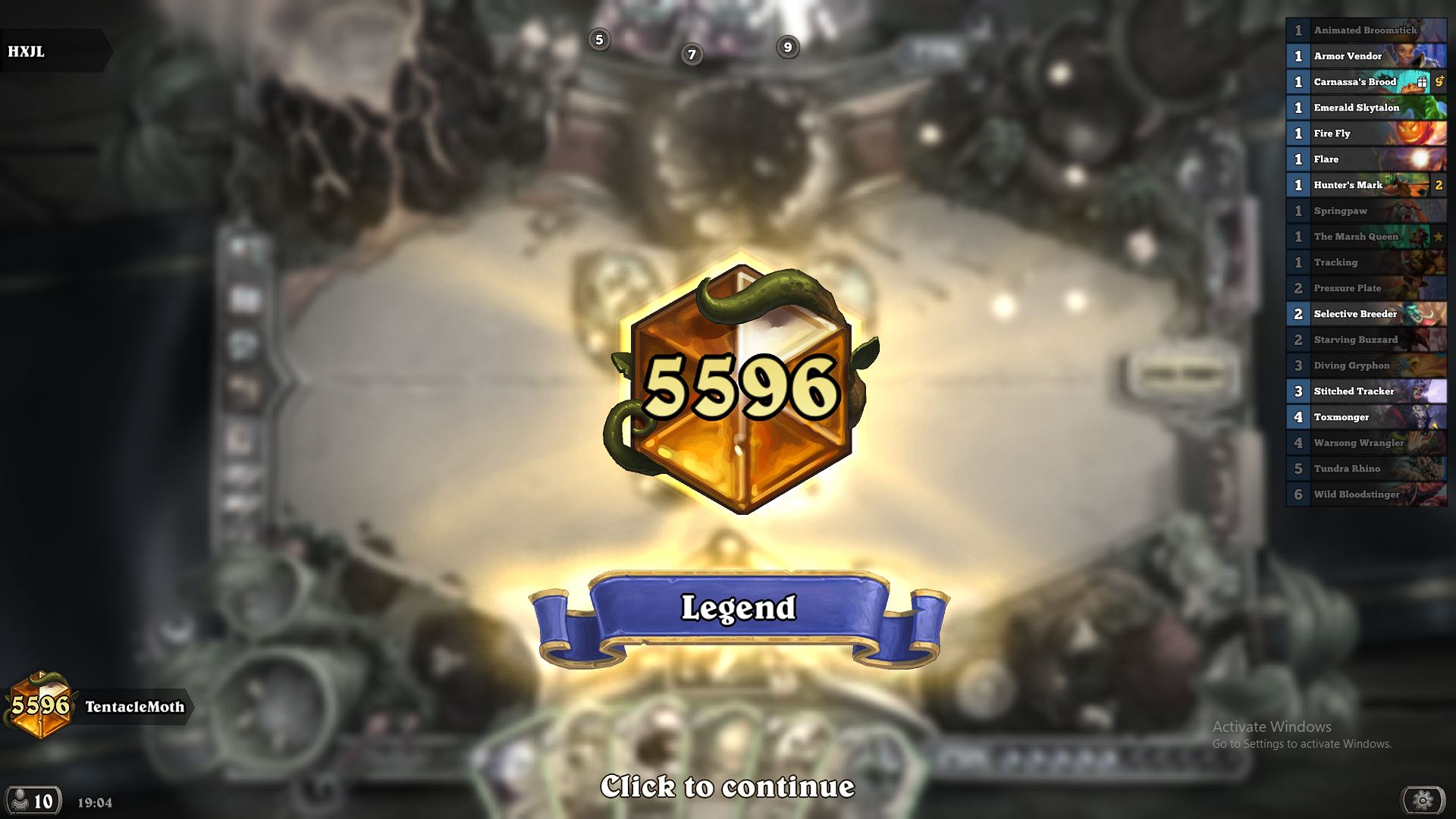 Just hit legend with this deck. Across all versions of the deck I had a 63% win rate from 87 games and this final version went 11 to 4 to get me to legend.

Ever since the original hunter quest came out I've wanted to create a viable deck to go around it, but it's never been remotely good until now.  This definitely isn't tier 1 but it is able to climb if you play it well.

Why did this deck used to be bad but is now much better?

Turn 1 - It used to be a huge sacrifice to surrender turn 1 as hunter to play the quest because it would be hard to regain tempo. However, now that everything has Rush or can be given Rush by Animated Broomstick you still get to dictate the trades even when behind.

Bad Topdecks - This is the biggest change.  There used to be a contradiction between playing lots of 1-drops to complete the quest, but then chaining together lots of raptors without drawing any other 1-drops and finding a Tundra Rhino amongst all those trash cards. This is now totally different! Mainly thanks to the Starving Buzzard unnerf you can now draw A TON of cards both before and after you play Queen Carnassa.  Also there are enough "discover a card form your deck" effects that you can find exactly the card you need, whether it's buzzard to draw more, springpaw to combo with a buzzard in your hand or rhino to finish them off.

Raw Damage - hitting the opponent with 5 raptors + rhino = 17 damage. That may have been okay back in the day but it's nothing in todays wild. However with 1 Warsong Wrangler that goes up to 27 damage and 2 wranglers = 37 damage. With just 1 wrangler and only 4 raptors it's almost always enough because of chip damage from your minions and hero power.

(I will continue to update this, there are lots of matchups I haven't faced much yet)

The basic win condition is Queen Carnassa (quest reward), usually followed by at least 1 Warsong Wrangler to buff the raptors, and finally a turn of hitting them in the face with a bunch of raptors + Tundra Rhino.

Against some types of combo deck you want to instead focus on finding Wild Bloodstinger, which is helped a lot by the discover effects and allows you to gain multiple copies. I still try to complete the quest but it is of secondary importance to finding Bloodstingers and making sure you have enough board space to use them properly.

Mulligan - Usually I look for 2 x 1-drops to play on turn 2.  Fire Fly and Springpaw are perfect for this since they generate the 2nd copy.  If I think they could be running a deck that will play a slightly bigger minion on turn 3 that I will want to deal with (a lot of aggro decks) then I keep a Diving Gryphon. I always keep they quest in mulligan because even against aggro this deck runs out of value if you don't complete it.

The Quest - I always play this turn 1 unless I'm against something hyper aggro and I can see why playing a 1-drop will make a significant difference (e.g. killing a pirate warrior's Invalid Deck ID with a Springpaw. I will then try to play the quest asap, usually turn 2.

Buzzard - Try to set up drawing cards with Starving Buzzard + Springpaw and Emerald Skytalon, but don't try TOO hard. Try to weigh up if you can hold springpaw back an extra turn to draw cards with a buzzard in your hand next turn or you need to play it now to stop damage.  This just comes down to practice + knowing the matchup etc.

Warsong Wrangler - In most matchups don't play this before Queen Carnassa unless you have to.  The point of this card is to buff the raptors once the queen has put them in your deck.  However there will be times against aggro you have to drop it early if you are out of other resources or just need a body.

Animated Broomstick - This works great with Queen Carnassa herself so try to use other 1-drops first to complete the quest. Don't be afraid to play it for no value if it's the only way to finish the quest.

Finding Tunra RhinoBADCARDNAME - If possible look for rhino with Selective Breeder BEFORE playing Queen Carnassa. Otherwise there is less chance you will see the rhino in your choice of 3 beasts because raptor will take up a slot. However don't make this a big deal, usually it's best just to have Carnassa down as early as possible, but sometimes on turn 7 for example you can play Selective Breeder then Queen Carnassa to be optimal.

Setting up for lethal - If you have Tundra Rhino in hand and some buffed raptors but don't have lethal this turn (maybe you only have a few mana left after playing Warsong Wrangler for example), don't usually play ALL your raptors, they might not draw another raptor to use next turn.  I usually play enough to threaten my opponent whilst still keeping ideally at least 3 in my hand. However if you have a Starving Buzzard on board or that you can play first just go crazy, you should draw more raptors than you play.

Boardspace for lethal - Remember that for maximum damage from you Tundra Rhino + 5 raptors you need 6 free spaces on board.  If the turn before you played a load of Fire Flys and your opponent hasn't got a minion to trade them into because they are playing a removal-heavy deck, then you are screwed for at least another turn.  It help to do a bit of maths to calculate how many raptors + rhino need to hit face, how much board space that would need, and if your other minions already on board do survive, how much damage they will contribute.  Therefore in the late game it is often better to use spare mana on the hero power rather than playing minions that might clog up your board unless you know you will be able to trade them off.

Strategy Against Combo Decks that Wild Bloodstinger can Disrupt

At the moment this is mostly against Flamewaker and Mozaki mages, but also works against any deck that Dirty Rat normally works against such as Shudderwock Shaman.

Mulligan - In the mulligan against any opponent you think is likely running this type of combo deck ( at the moment any mage), keep any discover effects, especially Selective Breeder. Don't keep Warsong Wrangler or Wild Bloodstinger itself unless you are sure it's a combo deck or you are against mage. If you are keeping Bloodstinger then you don't need to keep the discover minions since you already have it.  If it's a mage also keep Pressure Plate and Flare.  You still need to keep the quest because you still need to be able kill them eventually.

Finding Wild Bloodstinger - Apart from playing the quest turn 1, you want to optimise your plays around finding as many Wild bloodstingers as possible and playing them at the perfect time.  Against mage this is playing them as early as possible, as long as you have enough an extra 2 damage to kill Mozaki if you think they might be running that version. Against these types of mage you are also looking for Pressure Plate and playing that as soon as possible.  Sometimes the best way to find them is also with Starving Buzzard + Springpaw on turn 4, which can either find the bloodstinger or a discover to play on turn 5.

Apart from this you still want to carry out the normal strategy as you still need to be ready to kill them eventually.

Extra note on Raza Priest matchup - I haven't faced this enough to be sure yet but at the moment my strategy is to just pull off my combo before they can do theirs.  They usually play their key minions as soon as they have them so Wild Bloodstinger dosen't work, and they have raise dead anyway. So far I have had a lot of success just killing them instead of disrupting them.