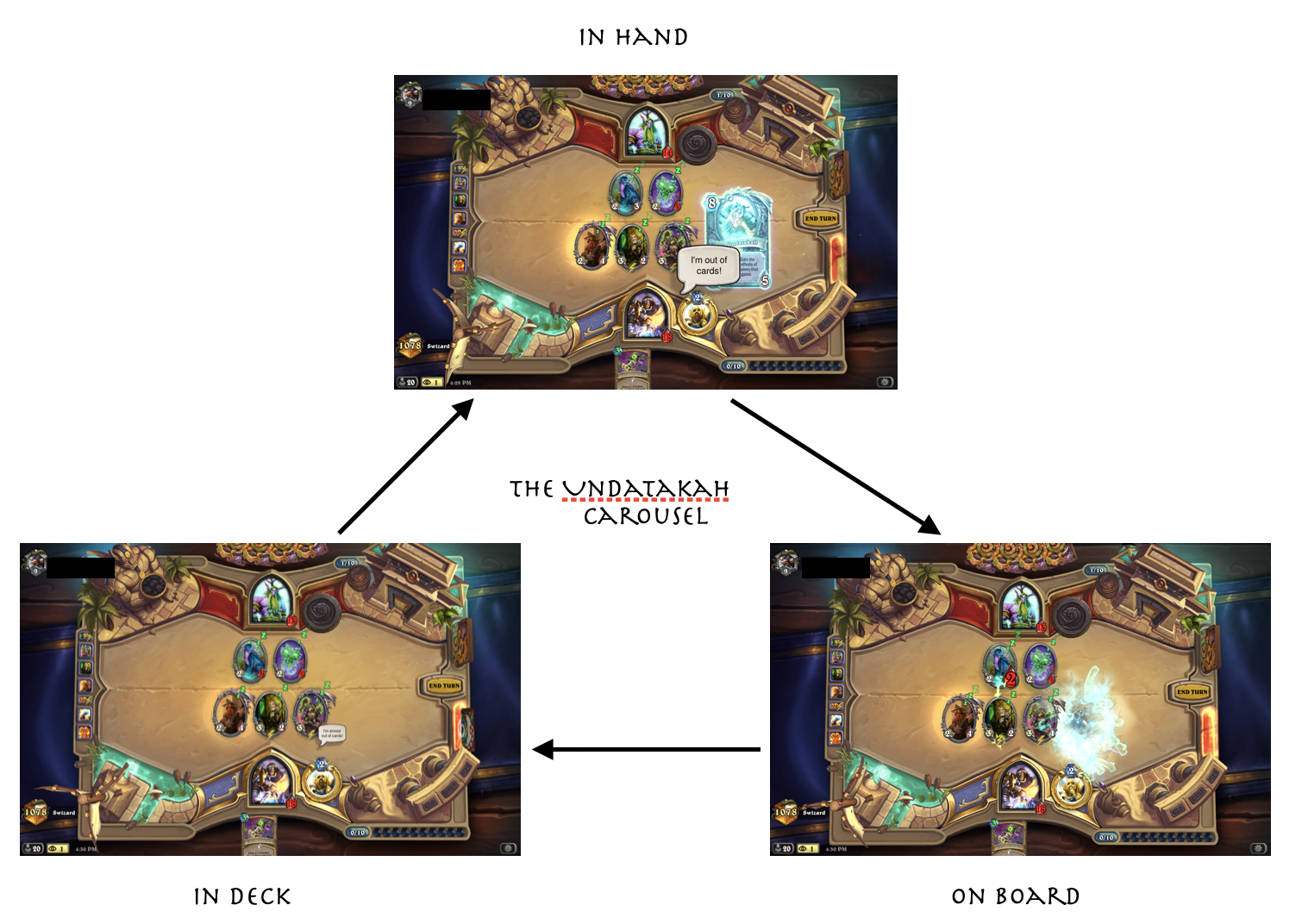 Each time Da Undatakah goes a round on his carousel, Knife Juggler will deal 1 damage to a random enemy. He will go around 62 times dealing 62 damage split among all enemies.

This is hard capped at 62, and the funny thing about this combo, which was timed twice, is it takes 13 minutes to complete each time it goes off. The animations for this are long and don't end at lethal so even when it's lethal you have to sit through 13 minutes of this or restart your app.

How to set up the combo

First of all, you can use your non combo related cards for survival and card draw. For removals you can use Wild Pyromancer or Consecration plus either Libram of Justice or Equality as a 2-card board clear.

To execute the combo itself, you want to have no minions in your deck and no minions in hand other than the combo pieces. You need to have Immortal Prelate be silenced and die (use Dalaran Librarian on it the turn you play it), have Taelan Fordring die, and have Blatant Decoy die (you can silence it to prevent it from pulling out a combo piece or keep some non combo piece for it to pull out).

The second part of the preparation for the combo is to play Emperor Thaurissan and Drakkari Enchanter when you have Brann Bronzebeard, Knife Juggler, Spiritsinger Umbra, and Da Undatakah in hand. You can play this on only 2 combo pieces if you are in a desperate situation and will do the combo without Brann, but if you do so it will only have a 1/6 chance of working.

Finally, to do the combo play these cards in the following order (playing them in the wrong order will make the combo fail to work): Brann Bronzebeard, Knife Juggler, Spiritsinger Umbra, and Da Undatakah. This has a 3/4 chance of success, and if it happens to fail you can try to play Da Undatakah again next turn if your combo pieces weren't removed. If the combo is lethal, your end turn button will turn yellow and won't do anything when you press it.

If you have a 1 mana Equality discounted by Emperor Thaurissan you can play it first to reduce hp of enemy minions and increase the chance of lethal.

This is a combo that is unique in that it has funny animations of Da Undatakah going around on his "carousel" and that it lasts for 13 minutes. If your opponent doesn't concede by then, it may be interesting to see what their reactions are to this. Something to note is that even if they do concede, the animations will still keep going for you. If you want to stop watching the animations from this combo, just quit your app and restart and it will record the game as a win.

Hope you enjoy this deck, and write any comments or questions about it below.