This deck is focused on one thing, and one thing only... to steal the reward of your opponent's Quest, then win with it!

Wait for your opponent to complete their Questline, stall and draw with classic Mill Rogue tools, then copy their 5 mana 7/7 payoff minion and win with various, class-specific methods.

I was thinking about the new expansion when I had an idea. When United in Stormwind drops, players open their packs and they make a deck to try out their shiny new Questline cards. And with this deck, we're going to farm them, hard.

All of the new Questlines have a common weakness in them that we can exploit. The big payoff after completing them is tied to a 5 mana, 7/7 (8/8 for Guff the Tough) Battlecry minion. As a Rogue, we're going to obtain a copy of this minion (with potentially even robbing the opponent of the effect by Ratting it). Then, we play it over and over again with our bounce cards to steal and multiply that powerful effect with our opponent having done the hard work of completing the Questline for us!

Bonus round: this deck can also steal the rewards of:

[Disclaimer: this is not meant to be a competitive, Ranked-viable deck. It was built to toy with Quest decks, that's its only purpose. It's likely awful against anything else. You have been warned.]

These are the very core of our deck, what it was built for. These give us a copy of the payoff minion, so we can play it for the Battlecry.

- Faceless Manipulator, target the minion then bounce the copy.

These cards return our minions to our hand, most of the time Coldlight Oracle or the Quest reward.

- Togwaggle's Scheme delays fatigue and gives us lots of one card.

- Tenwu of the Red Smoke

- Coldlight Oracle works well with the many bounce effects in our deck.

These help us survive until our opponent completes their Quest.

- SI:7 Extortion is in my opinion a great addition from United in Stormwind. There are lots of powerful 3 Health minions like Tunnel Trogg and this provides a cheap clear against them, helping us survive. Also, Tradeable is a fantastic effect for cycling in combo-oriented decks like these, making the card that much better.

- Cloak of Shadows: These two cards buy us a free turn.

- Dirty Rat puts the Quest reward on the board without the opponent getting the effect so we can Faceless Manipulator it.

- Efficient Octo-bot gives us huge mana discounts on our hands so we can play more cards on the big, Quest-stealing turn.

- Garrote is our win condition for the Mage and Shaman matchup. It's a unique, powerful effect and I was excited when I saw this card revealed. It has many great combos like the ones I'll show later in the guide.

- Brann Bronzebeard is a fantastic piece of extra value. Double your Coldlights, your Rats or your Quest rewards.

- Sideshow Spelleater is for the Hunter and Paladin matchups.

- Togwaggle's Scheme to start increasing it early, but it's not needed against Warlock.

- Coldlight Oracle or Murloc Tastyfin to have your draw engine ready.

- Plagiarize or Vanessa VanCleef in case the Quest is quickly completed (not necessary against Priest, they're slow).

- vs. Demon Hunter and Final Showdown:

This one's easy. Have you got that Togwaggle's Scheme early? Then shuffle in those Coldlight Oracles and play Demonslayer Kurtrus twice. Draw through your opponent's already thin deck using those 0-Mana murlocs in one turn and kill them with Fatigue.

Guff the Tough probably benefits the most from replaying out of all the mercenaries. Do it a lot and win.

- vs. Hunter and Defend the Dwarven District:

Because refreshing your daggers is not the best effect, Sideshow Spelleater makes us too able to pew-pew the opponent down alongside Tavish, Master Marksman.

- vs. Mage and Sorcerer's Gambit:

This one's not a One Turn Kill, but a One Card Kill! Play Arcanist Dawngrasp twice to get that sweet +6 Spell Damage, then play Garrote and draw the Bleeds for 4 times 8, 32 damage to the opponent's face! Play Dawngrasp more times for even MORE damage!

- vs. Paladin and Rise to the Occasion:

Similar to the Hunter Quest, we copy The Silver Hand to make dudes. Then, with multiple Lightborn Cariels, our dudes will simply be bigger than our opponent's. Feel free to also copy their Lothraxion the Redeemed for bubbles.

- vs. Priest and Seek Guidance:

Rat + Brann are key in this matchup. Because Priest will likely tutor the Purified Shard after playing Xyrella, the Sanctified and kill you with it, we need to stop them from triggering the Battlecry. Then, we draw through our deck, find the Shard and win.

- vs. Rogue and Find the Imposter:

Expect the opponent to also bring lots of bounce tools for Spymaster Scabbs value. Nevertheless, you did not have to include all those garbage Standard power level SI:7 cards.

- vs. Shaman and Command the Elements:

This one I'm not 100% sure about. I don't know yet if Stormcaller Bru'kan doubles Casts When Drawn spells or not, but I don't see any reason why he shouldn't. If he does, then Garrote deals 4, and shuffles 6 Bleeds that also deal 4 for 28 damage total. Not lethal, but we shouldn't have much problem dealing that remaining 2 damage.

- vs. Warlock and The Demon Seed:

The reason why you don't need to keep Togwaggle's Scheme in the mulligan is simple. Your opponent will take both their AND our Fatigue damage as we draw a lot with the Coldlights after Blightborn Tamsin. Tamsin doesn't protect them on our turn.

- vs. Warrior and Raid the Docks:

Do you know what's better than The Juggernaut? 2 Juggernauts! Or even more! Replay your Cap'n Rokara to summon multiple of boats and bombard your opponent with superior firepower.

This deck guide was made for the United in Stormwind bundle giveaway. I had fun deckbuilding and writing it, I gave my best. This deck will likely be at its best after the expansion drops, I don't think Questlines will be popular in Wild. Still, you can surprise your friends if you ask them to show their Quest decks. Good luck! 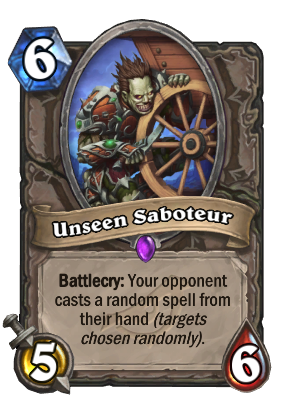