We're about 2 weeks away from the new expansion, so I thought why not try and make burn/doomhammer shaman a thing again, especially given that shaman has received some good cards. What better time of the year to start spamming freeze effects and burning face eh?

This deck is about burning face and nothing else. From the start of the game you've got to start counting down the turns it takes to explode your opponent's face. But we've been here before: shaman's burn plans are often railroaded by poor tempo and inconsistent draws. So what's stopping your opponent from just taking tempo on 1 and destroying your hopes and dreams by turn 5? As it happens, three very new cards are about to change all that :- 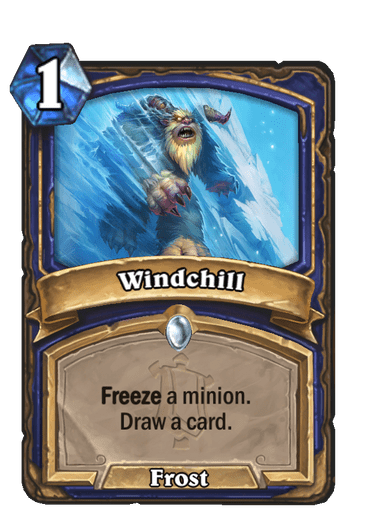 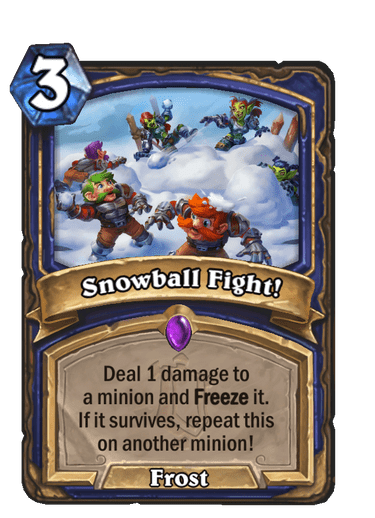 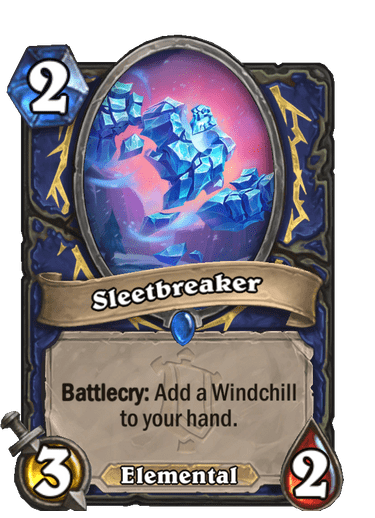 It cannot be understated that Windchill is likely one of the most important card coming out from this expansion for shaman. Forget your Bru'kan of the Elements. This one card will literally change how shaman will be playing. Snowball Fight! is basically a less consistent Frost Nova (but no less powerful), and Sleetbreaker literally gives you more Windchill cards.

Card draw - Perhaps the most important part of all burn plans. You have three draw options available: Cagematch Custodian, Windchill, and most importantly Multicaster. 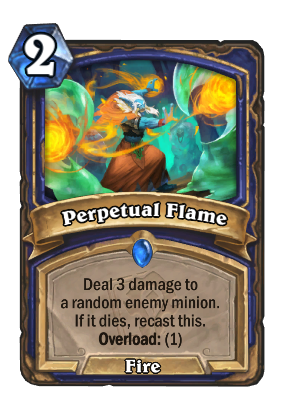 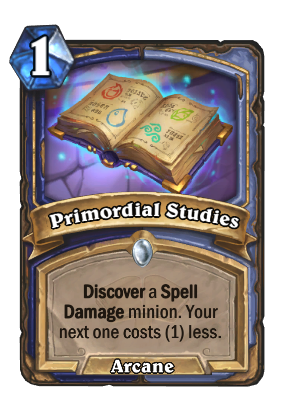 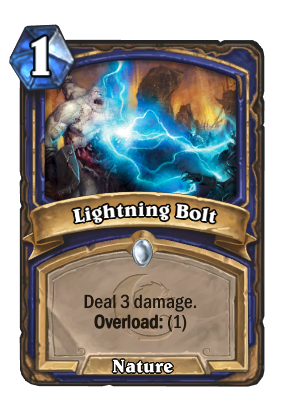 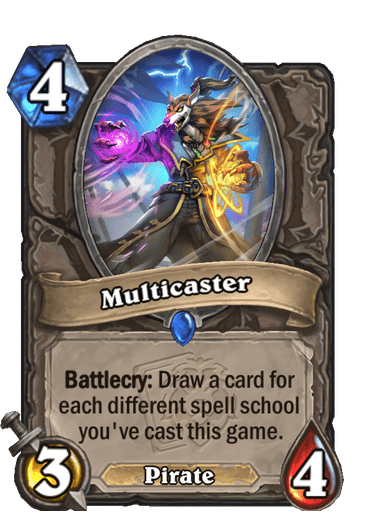 With the amount of draw, you can afford to only play one Cagematch Custodian and Doomhammer (because you never want to ever draw or play a second). For the same reason we're playing Lightning Bloom, because I don't think shaman is ever going to suffer from bad topdecks for some time. Boosts your Overdrafts too.

Clear options - There's literally only one: Perpetual Flame. This deck is only truly at the mercy of board swarming, where Snowball Fight! may not guarantee results and there's only so many Windchills available. There's where this steps in. Destroys everything with a bit of spell power, and while your opponent smirks at you overloading for 7 on turn 3, just wipe it all off with an Overdraft to face. In case anyone's wondering: yes, overdraft does gain additional damage from spell power.

Anything midrange or big that's even resembling a threat is easily ignored via freeze effects. See, if mage can bullshit their way to victory, why can't shaman?

Tempo - There isn't any. Unless you expect Cagematch Custodian to literally carry you all the way. Serpentshrine Portal can help a bit, but dont expect too much here.

Mull for Cagematch Custodian, Primordial Studies and Sleetbreaker. If you suspect its an aggro deck, then Perpetual Flame is a must.

Never keep Multicaster. It may be one of the most important card here, but the last thing you need is this thing clogging your hand while only drawing 1-2 cards. You'll want this to ideally draw at least 3 cards, 2 at bare minimum.

Only keep Doomhammer if your opponent's a filthy combo deck. This one card easily solos nearly everything.

FAQ (because why not)

- Why is this deck not playing Lady Vashj?

You have more than enough draw. You dont need a card that will only work after its dead and assuming you'll draw her prime sister before you die. If you get one via Primordial Studies, sure, but even then I'd exercise caution.

- Every Doomhammer deck will play Stormstrike, why not yours?

Truthfully its because I can't fit it into the deck. You can remove one Snowball Fight! and insert one Stormstrike in if you really want. But honestly, you don't really need it, there's more than enough burn in the deck itself. And if Doomhammer gets vipered you're really just screwed because Stormstrike to the face doesn't scale with spell damage. At least Rockbiter Weapon is cheap.

Once you equip one, you'll never equip another. And even if the first gets vipered, you can't even equip the second one immediately because of overload. Count up your damage. In most cases if doomhammer manages to deal 8 damage that should be more than enough work done.

Likely not. The math reaches to near 30, but it needs a near miracle hand to pull off. Doomhammer + 2x Rockbiter Weapon + 2x Lightning Bolt + 2x Lightning Bloom + 1x Overdraft = 28, at 12 mana. If you have an Imprisoned Phoenix it might be possible to do it, but kinda slow honestly. Even lifesteal dhunter will kill by then. Best thing is to have lightning bloom in hand and cheat your opponent's expectations. If you dont have doomhammer equipped 90% of the time your opponent won't expect to get OTKed.

Just play Imprisoned Phoenix. Its only here for a final burn plan if and when your doomhammer gets vipered.

Perhaps. Its a theorycraft. Chances are good you'll meet plenty of Lightforged Cariels on day 1 which will completely force a Rustrot Viper in here somewhere. I expect this to be tier 2-3 at best, because even I shudder at the thought of burn shaman being tier 1.

See you guys in Alterac Valley in 2 weeks.