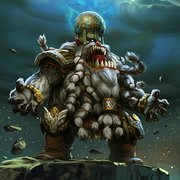 To Yrel,
I hope you'll enjoy this story as much as I did.
Come back any time!
Yours sincerely,
Silas

Once upon a time, there was a beautiful young woman named Butterspoon living on a farm in Flourin. She and the farmhand Yeastly were in love, but he had to set sail to seek his fortune so they can marry. Unfortunately, dragons ate his ship and he died. :(

Years later, Butterspoon is chosen to be Prince Thaurdinck's bride and is forced to marry him, but before the wedding she is kidnapped by a Gadgetzan crime boss Kazzini, a master swordsman Inigo Marintoya who seeks the man who stole his treasure, and Kazzini's big brute. They were followed by a man dressed in dark who, once he caught up with them, was revealed to be no one else but the unexpected hero - Reno Jackson! Told you Yeastly died.

Once he caught up to the three, they threatened to murder him and the woman. So, he immediately pulled out his gatling wand and started firing it randomly, wiping out the brute. Inigo, albeit impressed by Reno's weapon, ran away like a blue streak, but Kazzini threw Butterspoon down the hill before getting shot. She tumbled straight into the Fire Swamp and was teared apart by fish of unusual size. Yeah, that's right. Both main characters. Dead.

Reno didn't understand what was going on. It was supposed to be a routine obelisk termination, but Prince Thaurdinck accused him of murdering his bride and locked him in a dungeon. Luckily, the folk healer Miracle Zax had a vision. He could tell Reno's soul was pure uh, not evil, so he helped him break free and gave him some time to escape. At last, Reno could finally complete his mission, to destroy the E.V.I.L. obelisk before anything weird happened again.

A loud scream was heard throughout the kingdom, coming from the E.V.I.L. obelisk. Something weird happened again.

Inigo was depressed. He lost his job and his bulky pal, and there was still no sight of his treasure. Half Drunk, he decided to follow the sound to its source in the woods outside the city. Prince Thaurdinck was also befuddled by the sound and decided to seek it out with his vizier and a dozen soldiers.

Reno was closing in on the obelisk. He took his handy-dandy wand and started to approach with caution. Hidden in the woods, he saw a few trolls forming a circle and conducting a ritual of sorts on a weak spirit inside the circle. Even Reno knew that the Jenkins approach would be a bad idea in this situation. Unfortunately, Thaurdinck was not as experienced in fighting the forces of E.V.I.L.

He and his men came out of the forest and demanded the trolls explained the meaning of their actions. The trolls were mute. Thaurdinck, although truly a man with a divine spirit, didn't have the patience for "mohawk bucktooths", as he would call them. Furious at their disrespect, he ordered all his men to charge into them, but none did. They were all shaking instead. The vizier was revealed to be a n'raqi infiltrator and he had started a mass hysteria causing the soldiers to battle each other!

At this moment, Inigo got close enough to hear the battle. The stroll did little to his drunk state, so he walked straight into the plain, pulled out his sword and started fighting. Luckily, alcohol never diminished his skills and he emerged triumphant, with most of the soldiers neutralized, passed out from fatigue. Prince Thaurdinck's world had turned upside down, as his mind was devastated by the n'raqi's spell (and also kinda confused by Inigo.)

The good thing was that Inigo was apparently unaffected by the mass hysteria, possibly from all the booze. The bad thing was that he was so drunk there was no real difference from being under the n'raqi's control. Without even noticing that Inigo wasn't enchanted, the infiltrator ordered him to execute the prince while he joined the trolls in their ritual. The spirit was forming and it was obvious the trolls were summoning a banshee.

The spirit's form has shaped, just as Inigo was starting to sober up. It was clear the banshee was in fact the princess bride Butterspoon! Suddenly, against all odds, Thaurdinck found new strength, got up and said: "Hello, my name is Prince Thaurdinck. You turned my dead fiancée into a banshee. Prepare to die." Inigo finally managed to get a grip on himself, only to realize his treasure was under the obelisk this whole time! "Hello, my name is Inigo Marintoya. You took my treasure. Prepare to die."

At this point, Reno was more confused than when he met a talking cow way back in Karazhan. Still, sitting in the bushes all this time made him feel left out, so he jumped out and said: "Hello, my name is Reno Jackson! You. Are. EVIL! Prepare to die!" The overwhelmed trolls immediately scattered, and the n'raqi infiltrator ran away. Since the ritual was not yet finished, banshee Butterspoon dispersed into thin air. The three musketeers ran after the faceless.

The infiltrator threw a knife at Inigo and injured him severely. He immediately fell down in pain, grasping for air. Reno triggered his gatling wand and fired, as a hail of bullets showered the n'raqi, sundering him to pieces. Prince Thaurdinck came to Inigo, but there was nothing he could do. Although Reno's mission was to destroy the obelisk, he couldn't leave such a great swordsman behind in pain. And so, the three musketeers were in a race against time to get Inigo to Miracle Zax for healing before it was too late.

The obelisk was left standing in the middle of the forest. Although the banshee summoning was prevented, the true purpose of it was still unknown. The whole area was still filled with strange energy. No animals dared to go near it, no plants would grow around it. The trolls' leader will find a new chief to lead them in activating the obelisk.
It's only a matter of time.